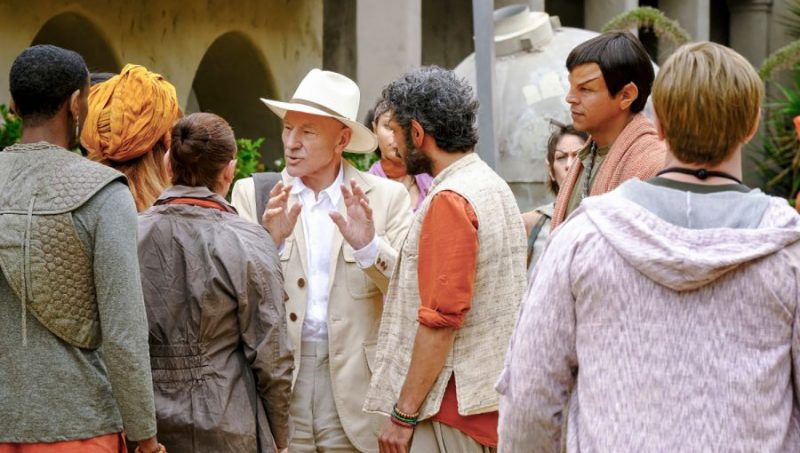 Four episodes into Star Trek: Picard, it has become very clear to me that when Jean-Luc Picard resigned from Star Fleet 14 years earlier, he not only walked away from his career in a move he thought honorable and right, he walked away from a large chunk of his life as well. I harken back to the first episode when he noted that he’d simply been existing, waiting to die. What we know now is that he didn’t simply go home to the vineyard, he closed himself off with the grapes and left people, important people, dangling a bit. That pigeon is coming home to roost a bit.

Episode 104, “Absolute Candor,” reconnects Picard with a group of Romulans he’d saved, including a young Romulan boy that he’d developed a wonderful closeness with early on in the evacuations. But much like Raffi in last week’s episode, we find that Picard simply stopped interacting with his charges on the planet Vashti. Just disappeared from their lives. A female religious order (and warrior caste), and the boy, were simply cut off. In the end, it feels as though Picard’s resignation for what he deemed honorable reasons made him act somewhat dishonorably to those who held him dear. In short, I find his actions somewhat selfish…wrapped into damaging self-pity.

It’s an interesting look at the story of Picard in the intervening 14 years between resignation and now. He left a lot of sadness and confusion in his wake as he boarded up his life within the boundaries of his vineyard. Fortunately, while there is anger in the hearts of those he is now reconnecting with, there is also love and loyalty. And he needs it. 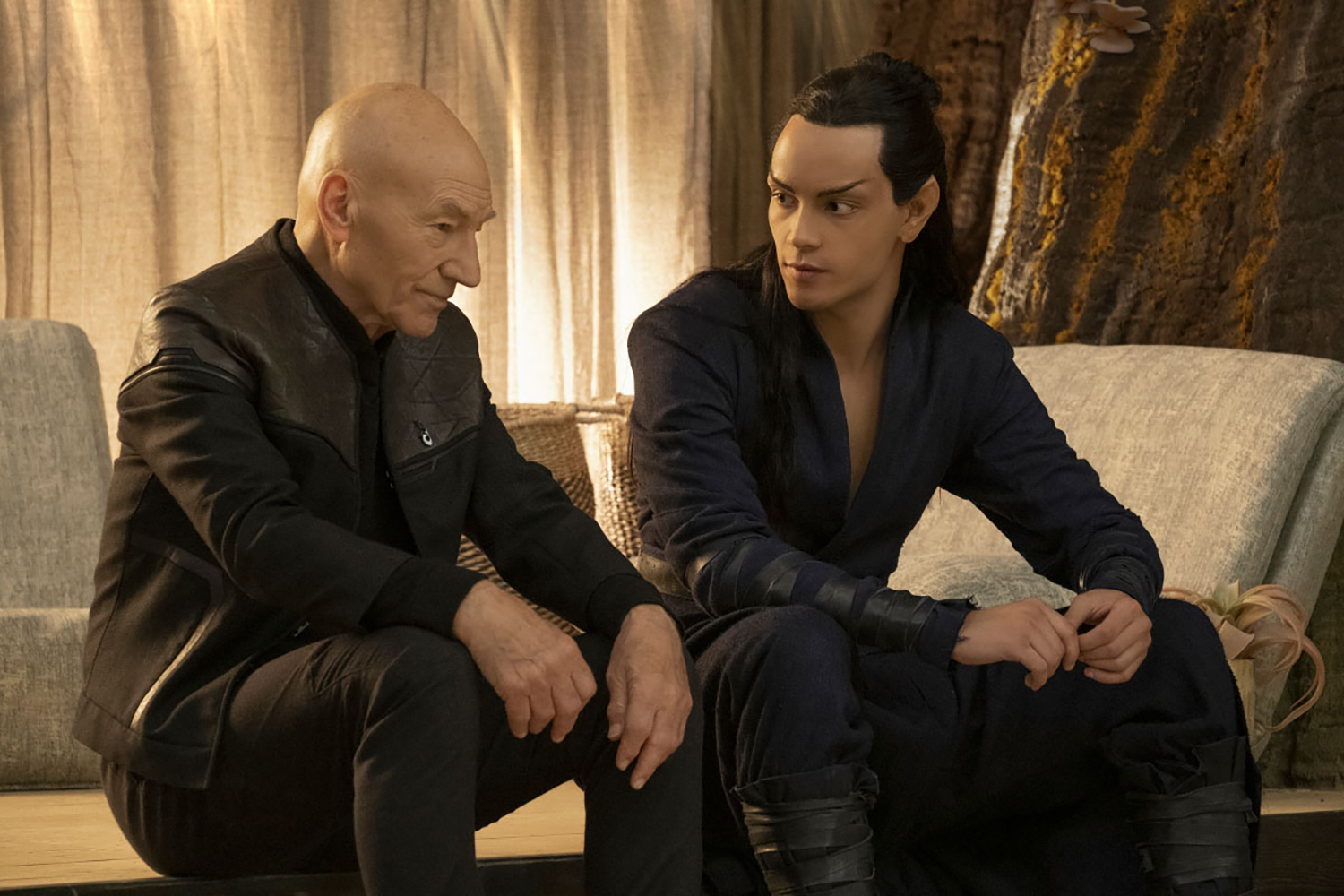 As the quest for Soji and our missing synth-creating doctor picks up pace, we get two more additions to the crew. First, on Vashti, Picard is reunited with the order he’d grown so close to, and to Elnor, the young Romulan boy from 14 years before. While it’s a happy greeting with the women of the order, there is sadness there. Vashti, and the system around it, has turned somewhat lawless in the years since. Picard has come to Vashti to enlist the aid of a “galankhkai,” a master warrior, which the sisters are all trained as. In the end, he hopes Elnor will accompany him – bind his sword to Picard’s quest.

There’s an interesting dynamic here as Elnor is clearly not interested in quality Picard time. There’s resentment there for Picard dropping out of his life so abruptly and so completely, reappearing only when he needs his sword. I don’t blame Elnor, either. This man had saved these people, had befriended them all, built this close, emotional bond with this young boy who was out-of-place in a what was traditionally a women’s group. And then he’s gone – just like that.

Fortunately, some Romulan troublemakers on Vashti open the door to Elnor joining the mission. Picard, stubborn and resolute as always, doesn’t like the discord and sets about engaging in some troublemaking of his own. Another interesting thing to me is that by his own admission, he’s an old man. And yet, he keeps trying to write checks that his aged body can’t cash. 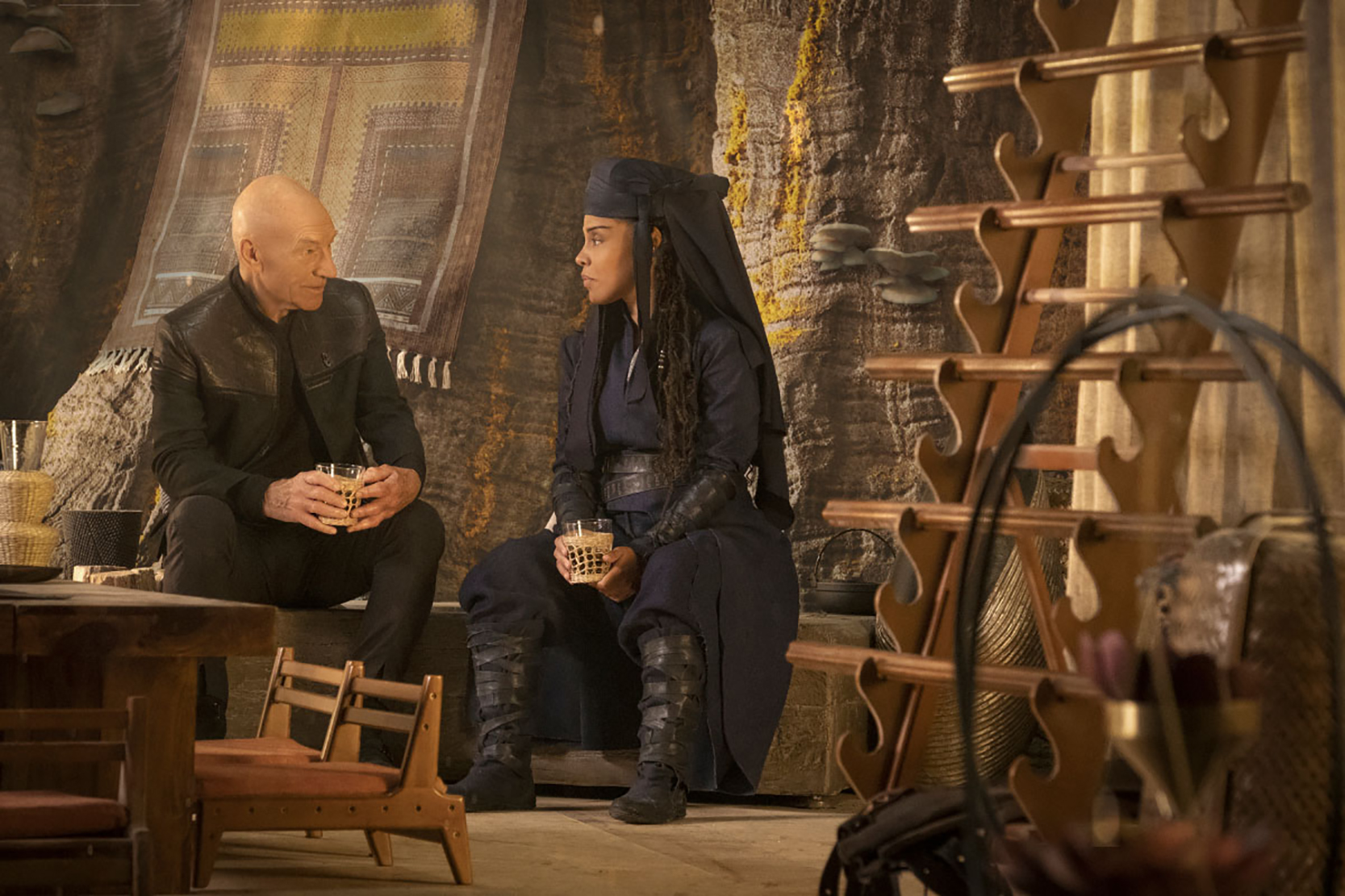 Dahj had to haul him around and save him as he slumped near a seat on the rooftop, Zhaban and Laris did most of the fighting when the Romulan death squad came calling at the winery (Picard was tossed over his desk like a toy in the brawl), and now he’s purposely picked a confrontation with some very large, well-armed Romulans that know who he is and aren’t thrilled with the promises he made that were broken.

Personally, I thought it a nice touch that the Romulan henchmen not only have disruptors, but also carry swords. Unfortunately for them, so does Elnor, who intercedes for the soon-to-be-skewered Picard and quickly decapitates the instigator. Oh, Elnor has some mad skills. He’s quick, he’s a floater, and he can deal death with precision. The young Romulan is a formidable warrior, though I had to laugh when Picard admonished him once back aboard the ship.

“That man did not deserve to die,” he yells at Elnor. To which I’m thinking, “oh, yes he did.” Jean-Luc, he was seconds from running you (an unarmed you – don’t toss the sword away next time) through – with malice. Elnor’s intervention is the only reason your quest remains. Don’t let your guilt over having abandoned this young lad send you to places you aren’t emotionally ready to accept. You wanted a warrior? You got one, baby.

But the planet Vashti isn’t through giving us some delight and excitement. No, it is not. As Rios and his passengers attempt to leave, they are beset by one of the resident warlords that have taken control over large parts of this particular system. An old Klingon bird of prey and Rios’ ship begin the dance of death, phasers firing all over the with hits and misses. And into the fray flies a third ship that helps our heroes defeat the enemy even as this mystery benefactor’s ship nears destruction. 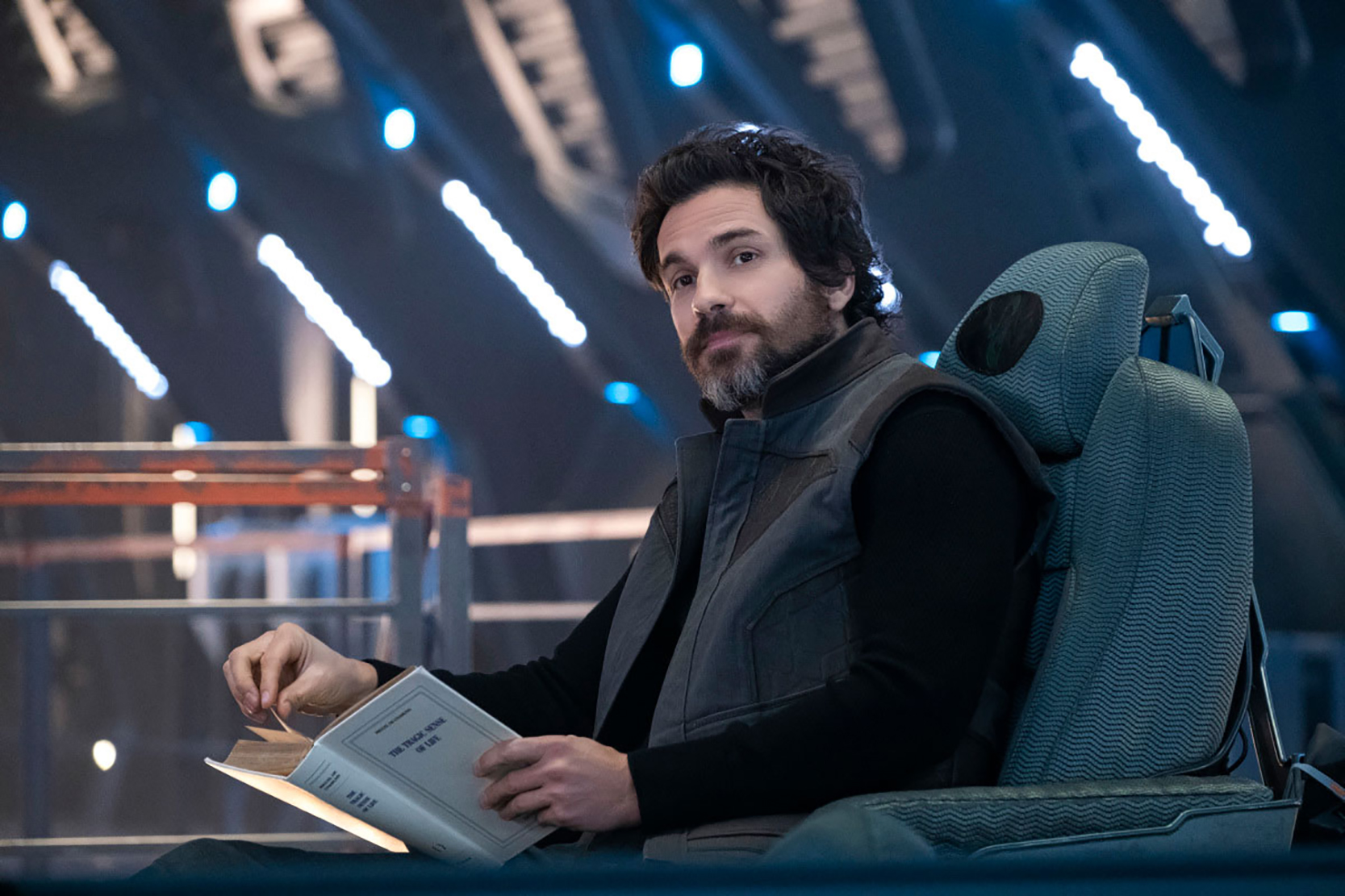 Rios (Santiago Cabrera) with his latest book in episode 4 of Star Trek: PIcard on CBS All-Access.

And who should beam aboard the ship but a fun little bit of the Star Trek past – 7 of 9. That’s right, the beloved Jeri Ryan character has at last shown up, telling Picard that he now “owes her a ship.” Oh, this is fun. Picard’s eclectic crew is starting to assemble, each with their own peculiar talents, backstory and skeletons in the closet. Why is 7 there and what part does she play in all of this?

Her Borg background would seem to indicate that she and the cube are going to get reacquainted at some point – or perhaps she’ll simply offer some valuable insights into Soji, the cube and what this whole “destroyer” myth might be about.

I have to stop a moment to reflect on Dr. Agnes Jurati. She has that wild-eyed naivete coupled with an inability to enjoy silence and peace. She loves to talk and it should prove quite a bit of fun as she is currently about two steps behind everyone else in terms of what’s going on and why? Initially, it would seem that Captain Rios, a man who keeps his own counsel, might find her increasingly annoying, but I think he’s going to come to enjoy her and, perhaps, find she pulls some things out of him he’s buried – positive things.

Anyway, Allison Pill plays Jurati as this kind of energetic first-time adventure enthusiast aboard ship filled with people who see the gravity and struggle in the task at hand. She’s kind of this direct emotional contradiction to the rest of the assembled crew. Should be fun to see how that plays out. 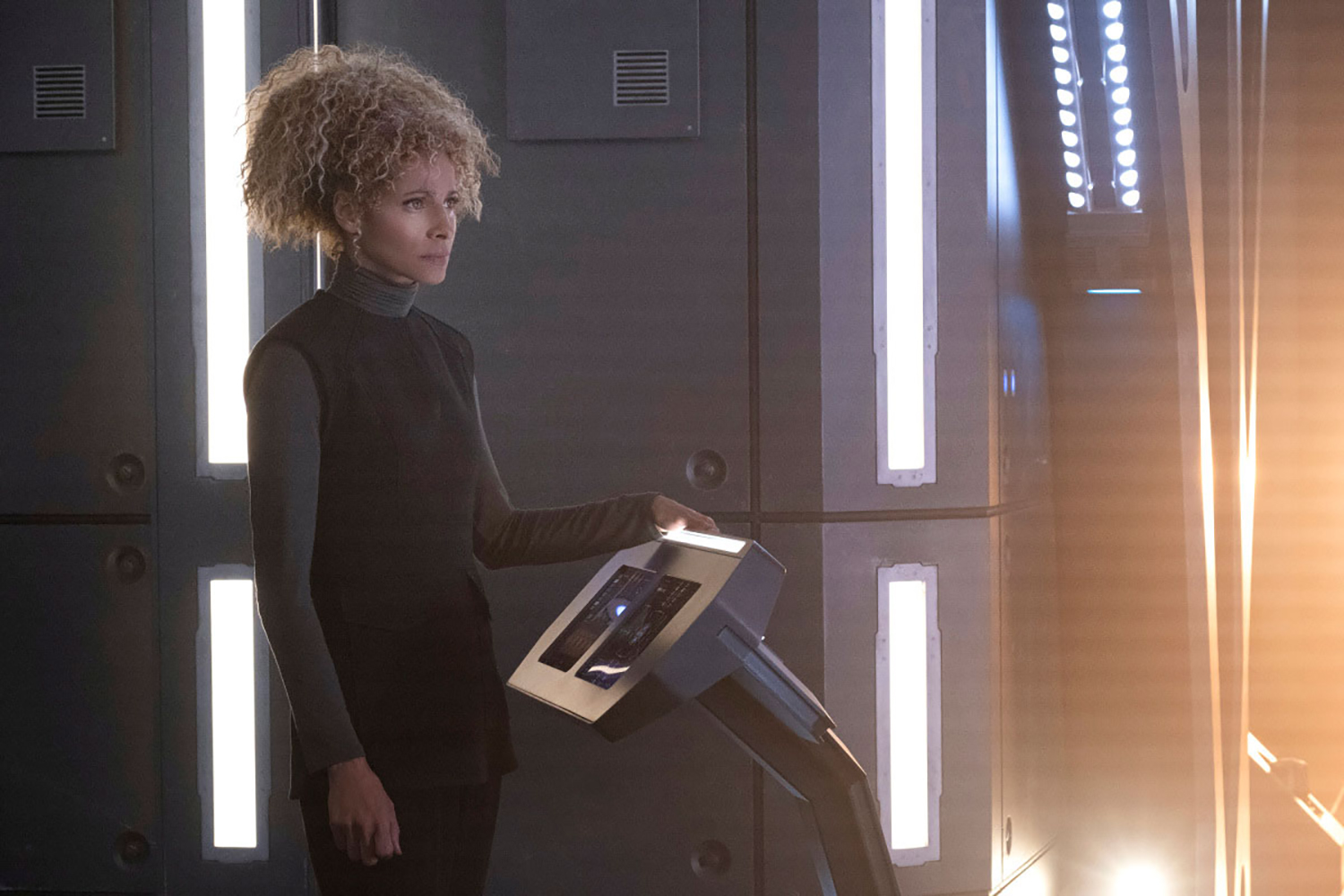 Here’s my question, is Soji more aware of who and potentially what she is than she lets on? Narek continues to play her while fighting some obvious feelings for her. Luckily, Narek’s sister, Narissa, is close at hand to keep her brother on task. But what’s his task? Ramdha called Soji “the destroyer” and we later see a vid clip of Ramdha talking about this very same prophecy. Is this what the Zhat Vash have feared for so long – the development of a synthetic life form that will be the catalyst for complete annihilation of a life?

I have to wonder if there’s a Star Trek: Discovery tie-in here where this same type of thing was narrowly avoided in the season 2 finale. If so, and I think it is, that’s a fun little tie-in for the two shows. Are we seeing the beginnings of something that will eventually come to fruition? Soji is becoming much more of a riddle wrapped in an enigma. I think that’s one thing that fascinates Narek about her.

In fact, Narissa poses the question to Narek about whether Soji might be manipulating him? I think it’s a valid question. Soji may not be fully aware of what she is doing. After all, she was sent to this Borg cube restoration project for a reason, Narissa notes. I think that’s worth mulling over a bit. What does the Cube, Ramdha, Zhat Vash, Star Fleet and all these secrets amount to? I’m looking forward to seeing these many single threads woven into something so interesting by this season’s end. 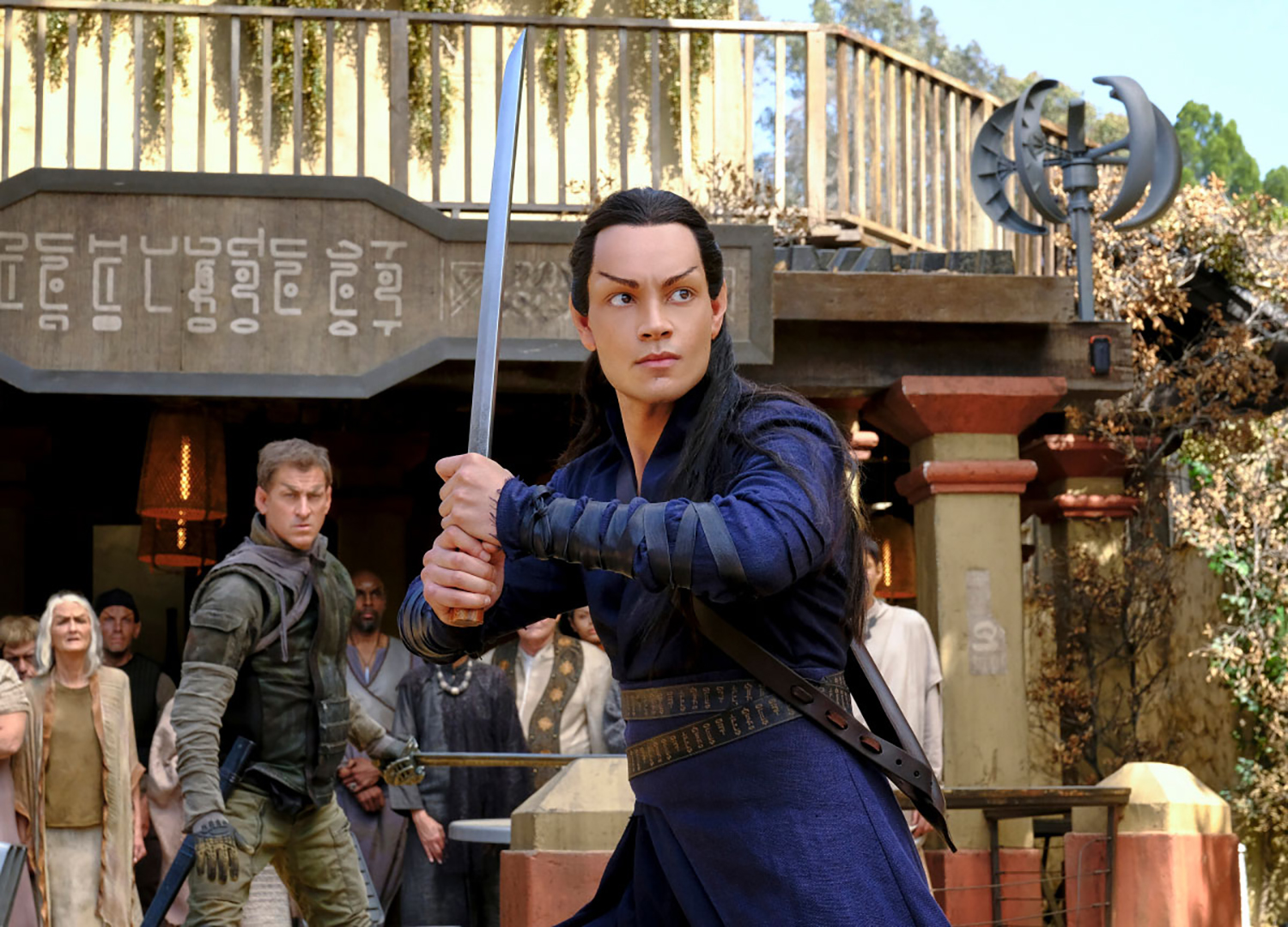 Another path I’m hoping we get to walk down more is the curious case of Captain Rios. Let’s face it, the guy has some serious demons he’s dealing with and I find his blend of interesting holograms – that all look like him but speak differently – and his apparent disdain for them kind of interesting. They all seem to have these interesting personalities, which I suspect is part of who he used to be before things kind of went wonky for him. There’s a lot of interesting stuff under that closed-off exterior. Backstory, folks. Let’s have some Rios backstory. He’s fascinating, to say the least.

Read an interesting take on Star Trek: Picard recently, one that I think has some weight to it. In short, the concept that the synth attacks on Mars and aborted evacuation of the Romulans was all part of an intricate Zhat Vash plot. I didn’t think all the dots connected, particularly the extermination of millions of fellow Romulans, but the underpinning of this whole thing hinged on the utter commitment to this fear of that one synth that would prove to be the “destroyer.” 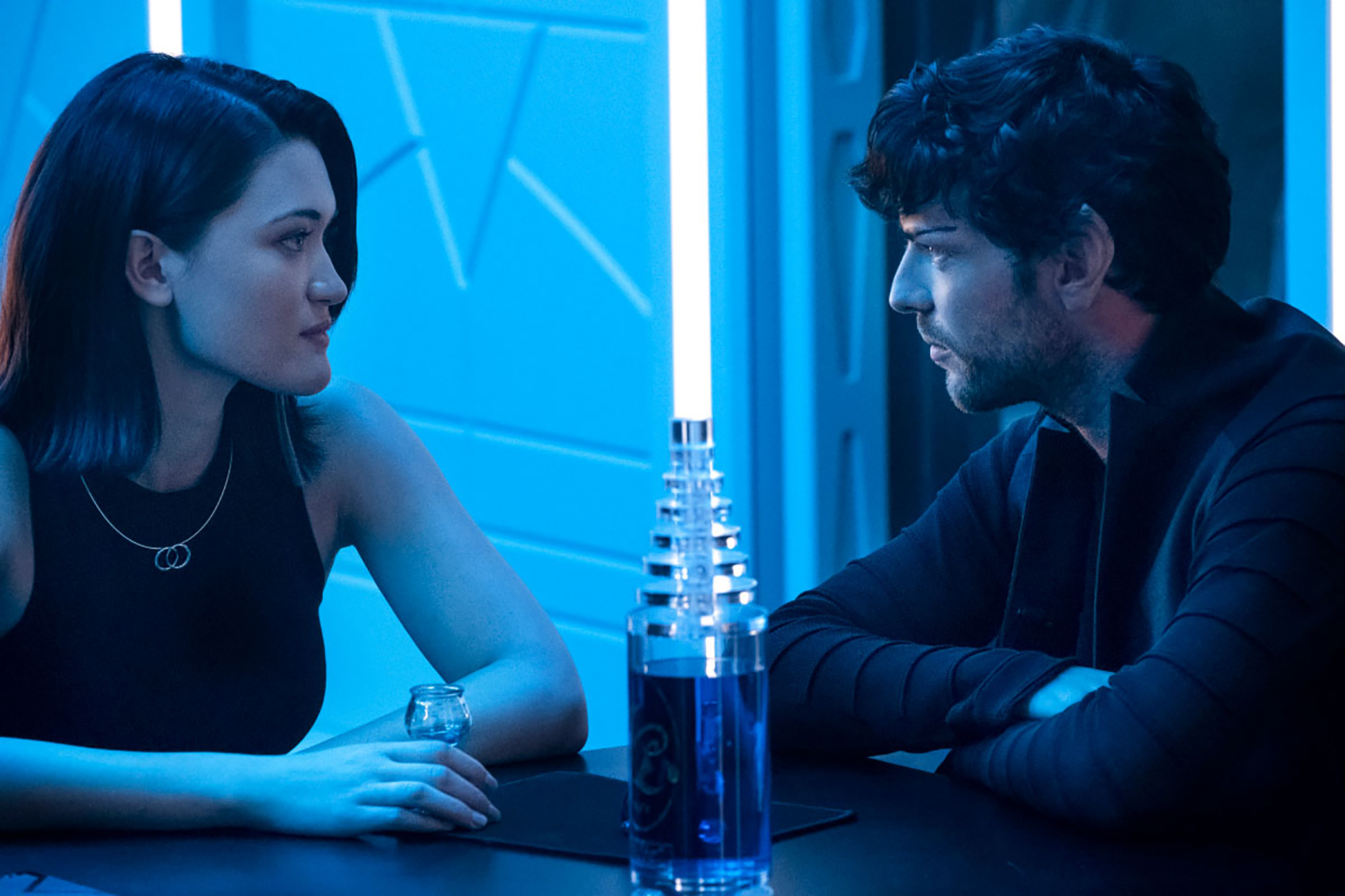 Soji (Isa Briones) and Narek (Harry Treadaway) aboard the Borg cube in episode 4 of Star Trek: Picard on CBS All-Access.

And so, the sacrifice was needed to help get the evacuation plan in motion, which in turn would be thwarted by the Synth uprising on Mars, which would send the evacuation plan down the toilet while also getting the synth threat nullified by the Federation. Yeah, I know, lot to digest there, but given the general treacherous nature of the Romulans within the Tal Shiar, and having that exponentially expanded within members of Zhat Vash, is it really beyond the realm of possibility that all of that was part of some deeper plan? I thought it was interesting to postulate about Romulans betraying Romulans on such a grand scale.

Anyway, something to kind of keep an eye on as this thing moves along. The tentacles of the Tal Shiar and Zhat Vash, along with shady elements of Star Fleet, as well as Soji’s ultimate end game, make this thing quite the fun little trek toward’s its conclusion.