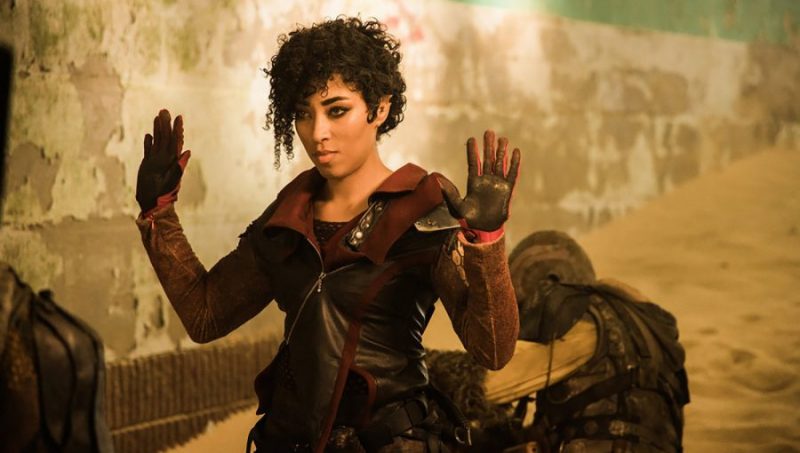 For my money, it’s hard not to like the vibe that a new SYFY offering delivers in a fun, outer space, coming-of-age kind of way. Vagrant Queen debuted Friday with an episode titled “A Royal Ass-Kicking,” and while there was plenty of that, there was a lot more. I enjoyed it.

The focus is on Elida, a princess who witnessed the fall of her family’s monarchy to a dark and sinister force called the Republic. She escaped and during the ensuing years she has made her way as a scavenger and semi-scaliwag while working very hard to keep her true identity a secret. This “vagrant queen” now roams the many sketchy corners of the galaxy trying to stay one step ahead of a very bad, yet amusing, character named Lozaro (I admit that Lazoro reminds me a lot of Babylon 5’s emperor Catargian in both manner and attitude). I liked disliking him immediately.

And that’s where we find Elida (wonderfully played by Adriyan Rae), on a planet called Gallianox where she’s picked up a piece of nice tech that others are wanting to steal. And it’s this early arc where we find out just what the vibe of this show is going to be about. There’s tenseness, a little stupidity, some nice attitude, and then all hell breaks loose in a fun way. “Last chance to stop being a dick,” Alida says to her tormentors and then the body parts start coming off. Yes, there is blood splatter. I was fine with it. 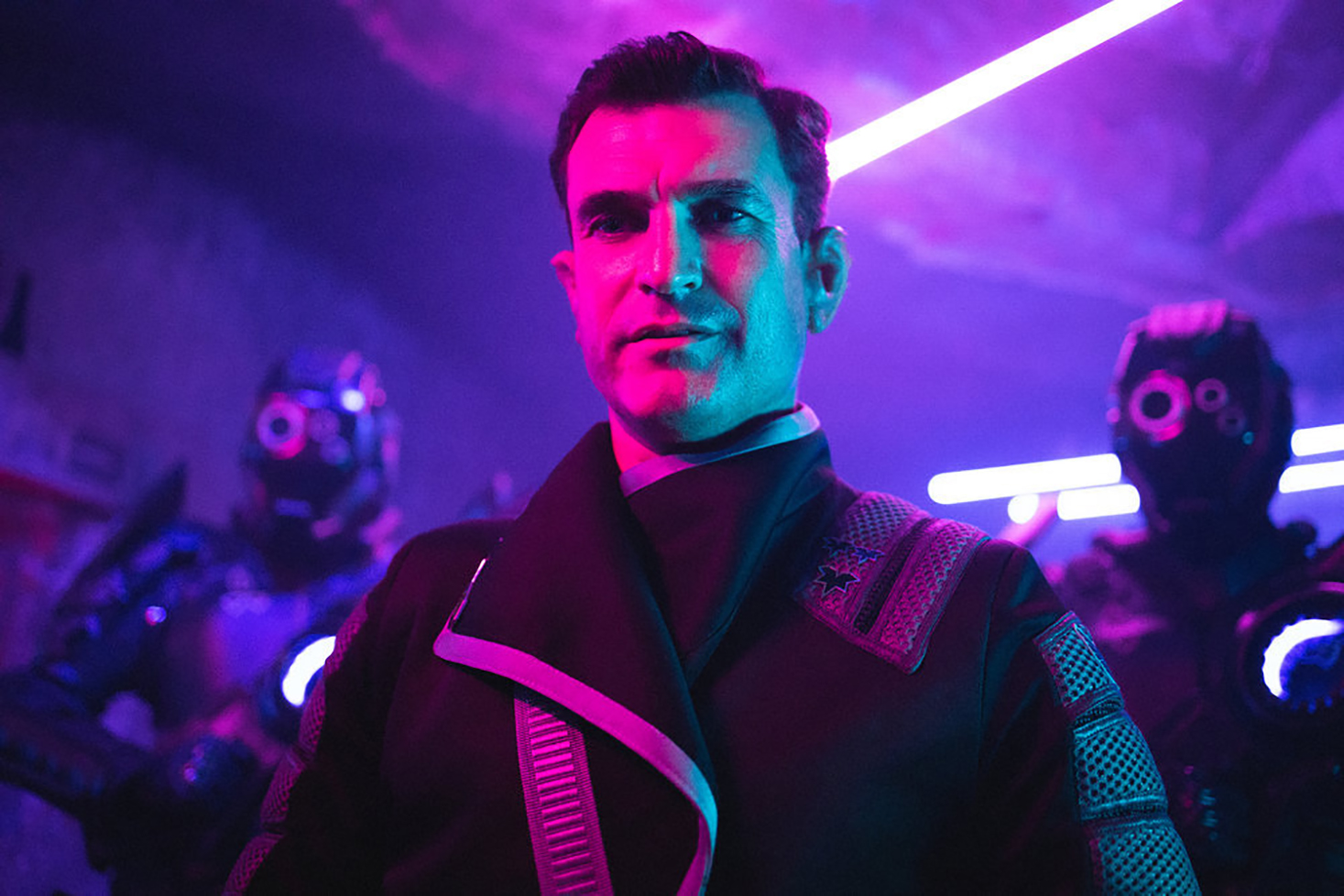 Turns out that the queen-in-hiding has some very formidable skills in the rough-and-tumble department. Again, this opening story sets a tone that the first episode – and I suspect the series – will carry forward with. I’ve heard a lot of talk about the flavor of Vagrant Queen, so I’ll offer my two cents worth. For me, the show is kind of melding of Firefly, Killjoys and The Orville. There’s a sense of fun about this show, a wink to the audience that this is sci-fi with important themes that’s going to have some fun along the way. I admit I dig this show and did so from the jump.

Back on Xija Station, where Elida apparently does her trading, the action really heats up. This show has a really enjoyable baddie in the form of Lazaro, a key enforcer of the Republic and a man with a personal vendetta against Elida. He “killed” her family and is committed to finishing the job by taking care of the princess….er, queen. Paul du Toit is a revelation as a cold, calculating enforcer with a sense of humor and style. He’s a guy to steer clear of, but you can’t help but kind of like him – if you get past the dominating personality and literal meaning of “break a leg.”

And when he arrives at Xija Station, things get interesting. Elida has been spotted and identified and Lazaro is on the scent. The whole thing has a Darth Vader on Lando Calrission’s sky station kind of feel to it as Lazaro lands on the station and immediately sends his lackeys to ruffle, rankle and generally irritate the inhabitants of Xija. And thus begins a fun little adventure aboard the station where Elida begins assembling her motley crew and we get a sense of the kind of characters and creatures we’re going to find throughout the show’s run. 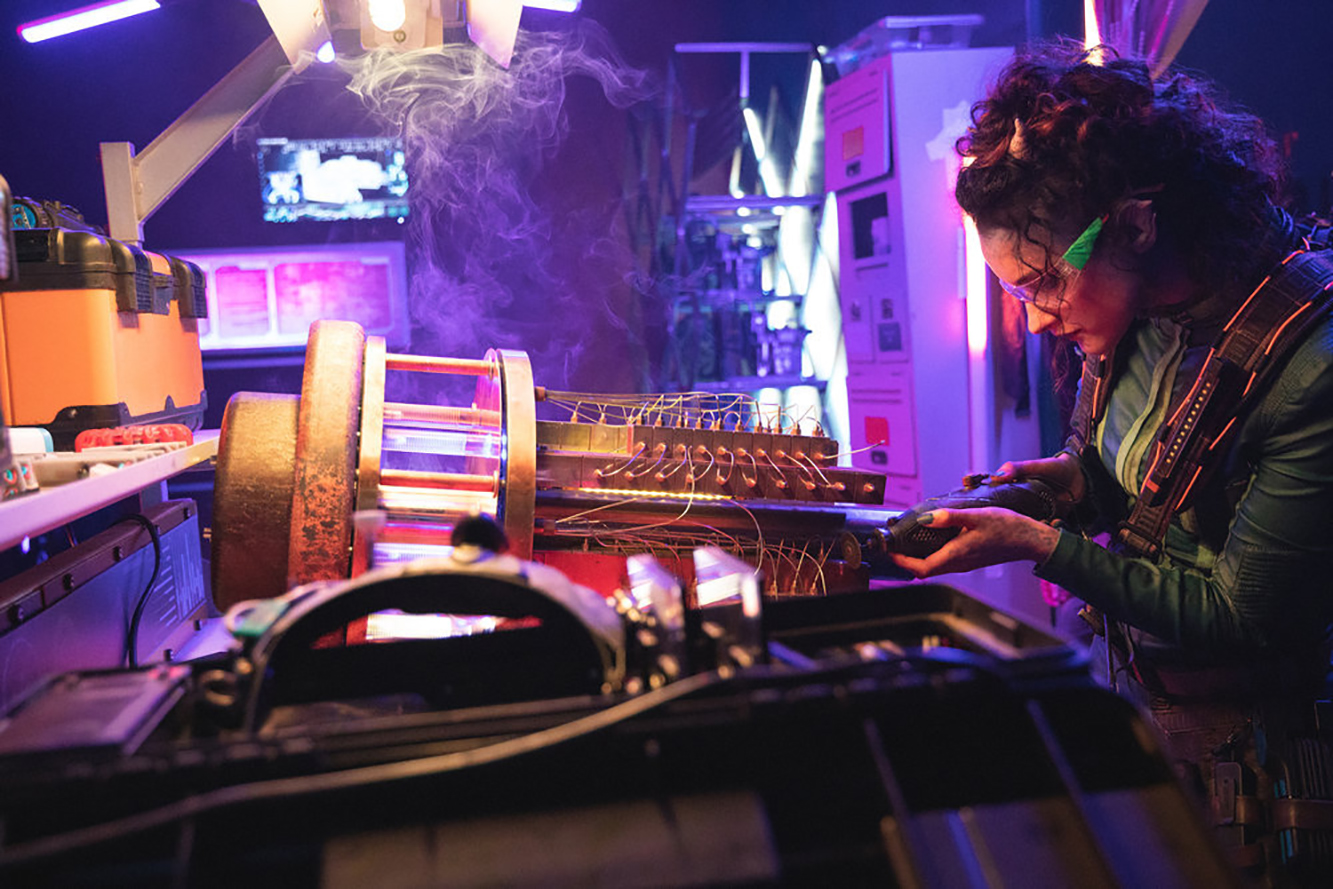 There’s Amae (played by Alex McGregor), the sister of a bartender who is adept at fixing things and has that warm, bubbly personality that is somewhat irritating in certain contexts, but also endearing in others. There’s also an old semi-friend (partner, really) named Isaac (Tim Rozon) that comes bearing information and is also the reason Lazaro has found Elida, as well as a group of subjects who are intent on reuniting the queen with her throne. Their love and devotion to the queen is sincere and somewhat naive at times. “Who do I have to behead to get a beer around here,” Elida says to assembled subjects – and their sense of humor meter is not engaged.

Problem is, Elida the scavenger doesn’t seem particularly interested in becoming Elida the Queen, which leads to more than a few funny moments. She’s cynical, edgy and seemingly comfortable with her new existence while her loyal subjects are honored, humbled, subservient and a little irritating to her highness. It’s a fun little run with these two elements bumping up against each other repeatedly.

Hey, there’s even a little ode to Star Wars when Elida falls into a trash container and is “this close” to getting spaced when our guard notes “I’ll get my third star and my own company assault carrier. Then I won’t have to drive around with Maaalcolm anymore. I mean, i dented the bumper once…once. Now he won’t let me near the controls. He’s not my dad.” It’s the kind of dialogue that this show offers repeatedly – fun asides and takes on things that really offer a joyful vibe. Good to see the henchmen with a little run in this show. 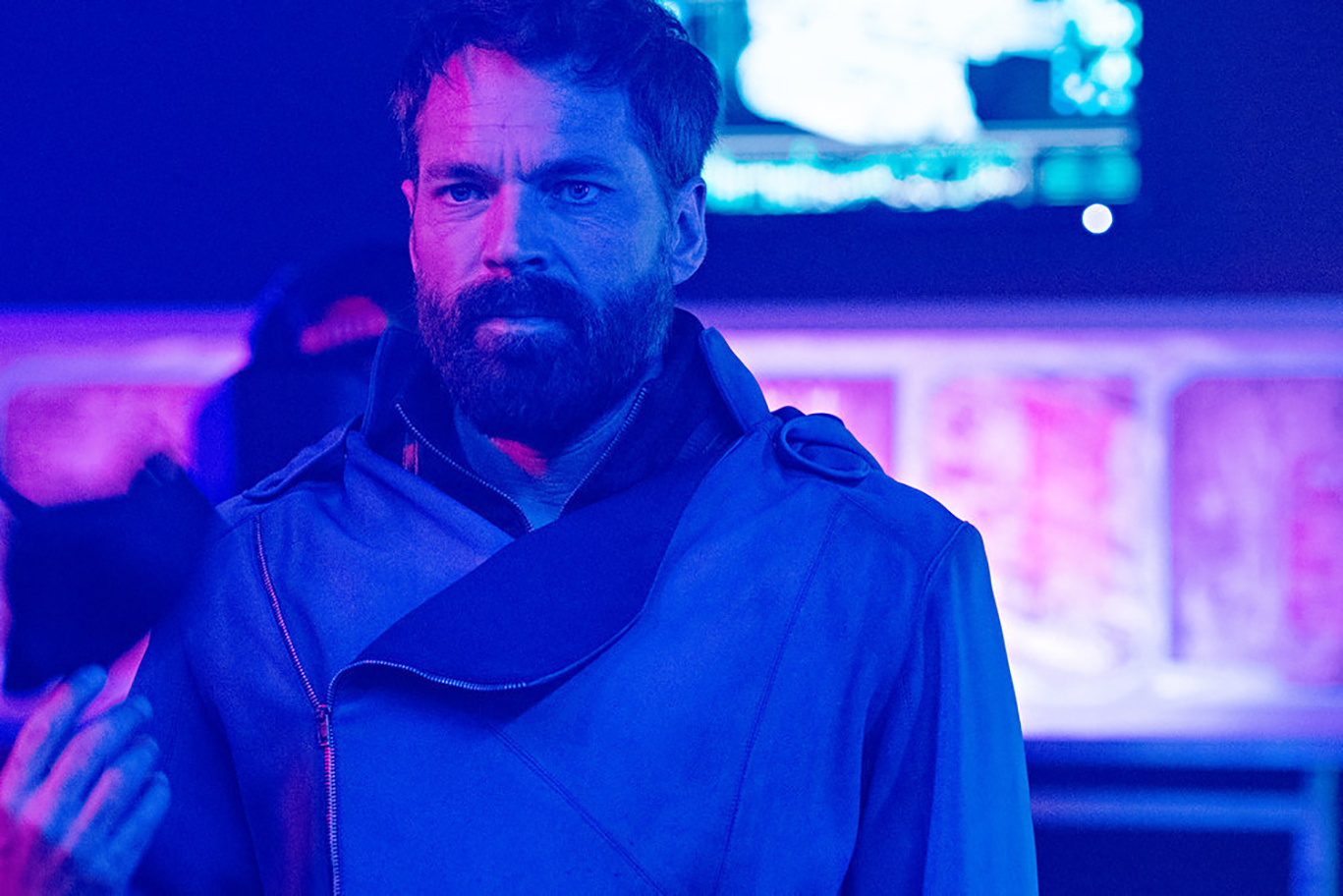 Rozon gives Isaac a bit of a charming denseness. He and Alida were scavenging partners in an earlier time, but the partnership broke up. Isaac doesn’t have the mental chops that Elida has and ends up leading the Republic to her on the station. You can tell these two have a love-hate relationship that includes strengths the other can rely on and strengthens them as a whole.

But in this, there first meeting in a while, there’s a level of tenseness and irritation between the two. But we also see that for all her desire to distance herself from the fallen monarchy, Elida still has some royal attributes – loyalty chief among them.

So as Lazaro cuts a swath through the station looking for information about Elida (You’ve been lying to me…naughty boy), Elida and Isaac catch up, her subjects wait for her to come to her senses, and the would-be queen hopes to get off the station and away from Lazaro before he fulfills his kill-infused desires. Still, despite her protestations about her birthright, Elida does show a noble side to her in attempting to rescue a friend from the station that Lazaro is using as bait.

There’s a nice push-and-pull between Elida and her loyalist followers – the classic needs of the many outweigh the needs of the few, or the one. “Do you not hear the crazy,” she tells one of her followers, who is trying to save her from herself. Because if the queen won’t listen to reason, you pop her across the head and chain her to a pipe. Yeah, that’s the way you do it. 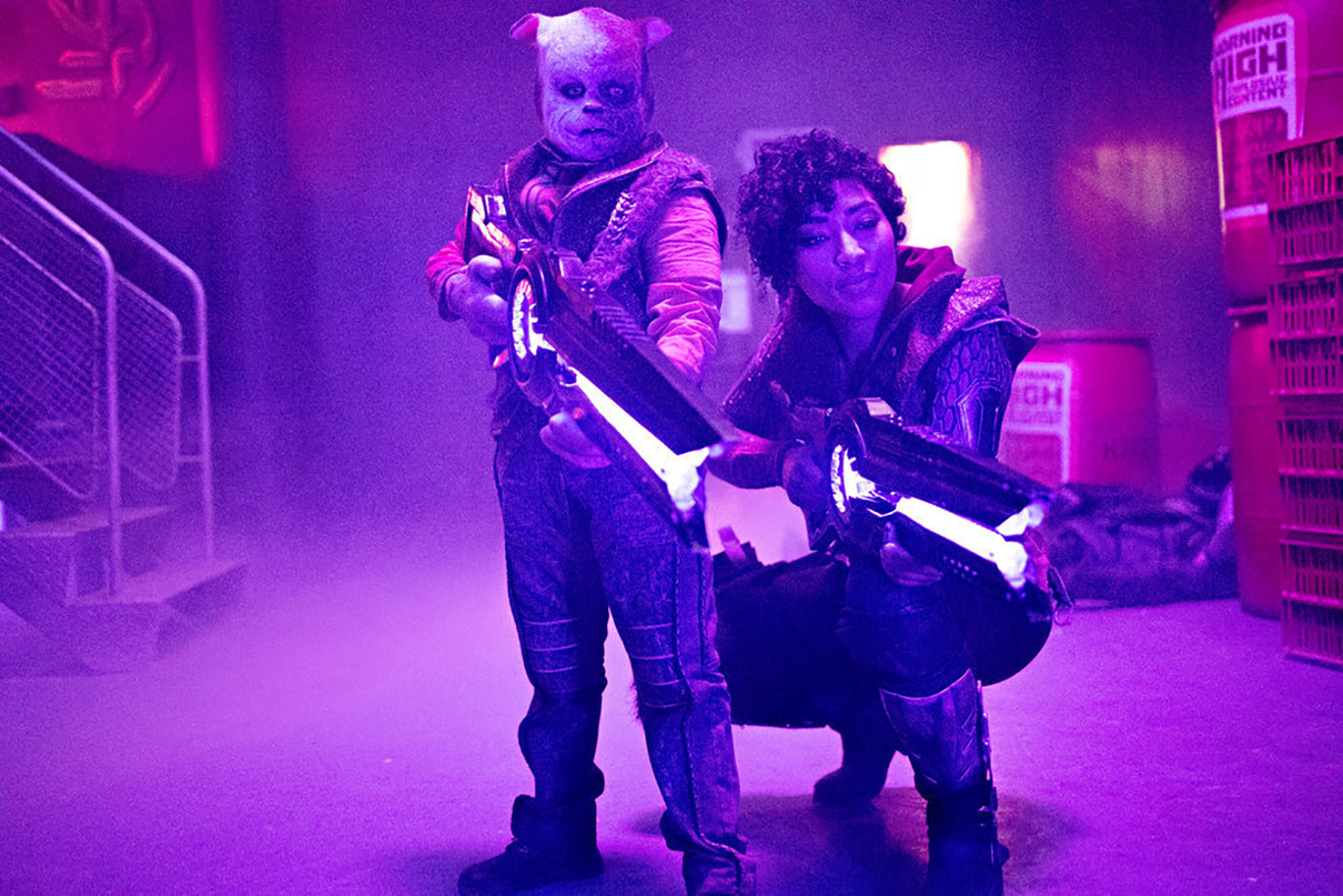 Needless to say, Isaac, Amae, Elida and a fun little dog-like character, Nim, make good on the rescue (Is Nim a MOG. John Candy is asking). There’s trickery, mockery and a very satisfying firefight as the rescue gets rolling – all the while Lazaro strolls calmly amongst the chaos dispensing broken limbs and unemotional mayhem wherever he goes. I can’t help but like him even at his evil-doer best.

In the end, amidst the blaster fire and funny one-liners and attitude, Amae, Isaac and Elida make it off the station. And there’s another big reveal, Isaac tells Elida that her mother is still alive and produces an amulet that was mom’s property. Isaac wants his ship back, which he feels Elida stole.

So, he’s offering info for the ship. Let’s be clear there’s a humorous fun element running through Vagrant Queen, but there’s also a tenseness and caring storytelling running throughout. And it’s not all fun and games as Nim is shot, then as he’s about to be taken by Lazaro, detonates a grenade to help save his “queen.” Nim was a weird creature, but he was also loyal, funny, and offered some interesting perspective at times. Is he gone? We shall see if it was a one-off for the Nim-ster. 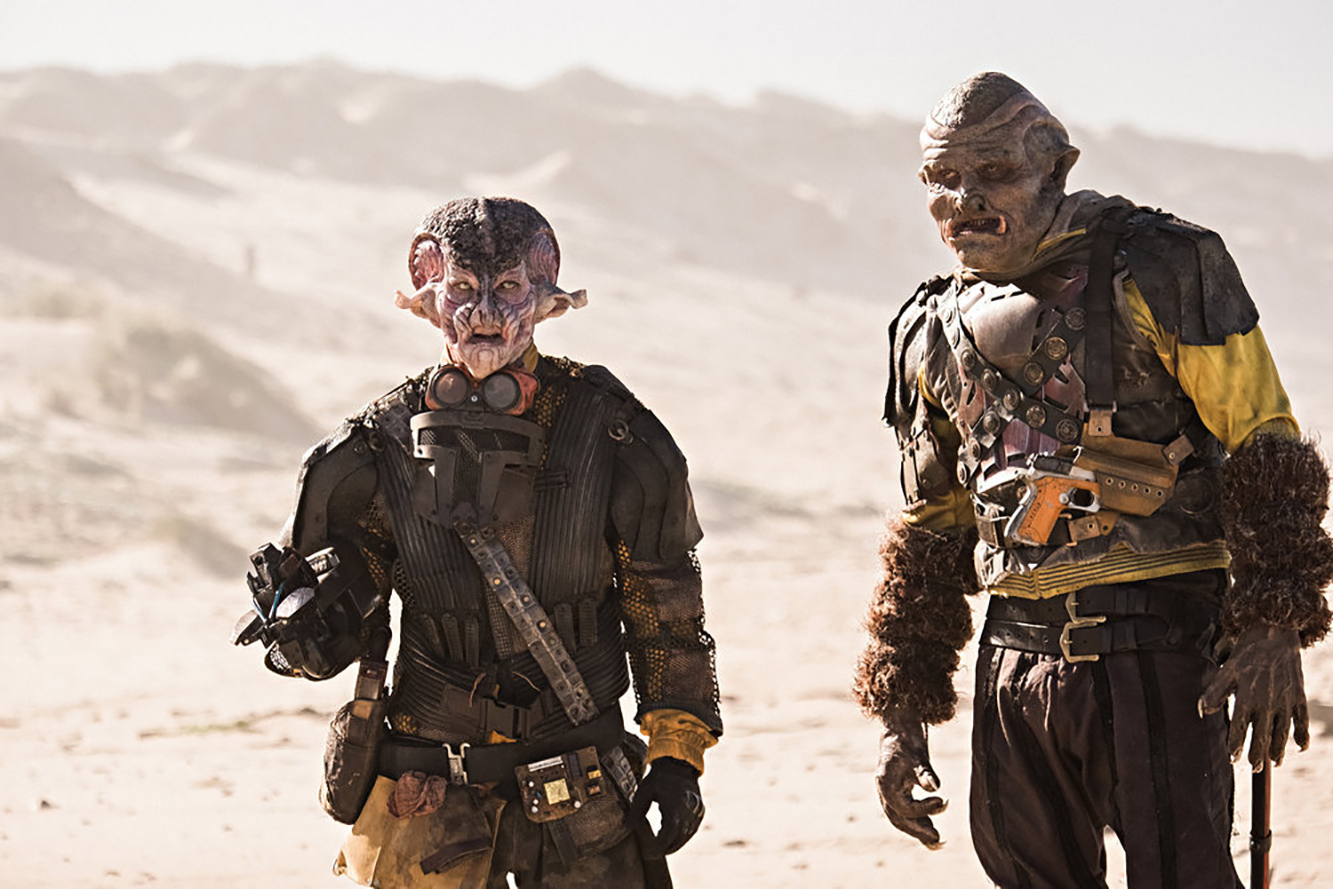 Again, this show has a coming-of-age vibe that you can feel building here. Nim’s sacrifice is a tough one for Elida to handle as she thinks there’s too much blood on her hands as it is. But it also signals that there are many who believe in what she represents and who she could be – a better way than the Republic.

My feeling, having seen multiple episodes so far, is that this is a fun little sci-fi gem that wants us to come along and join the fun. Elida is a kick-ass type of gal with a ready wit and a long veil of cynicism that she uses to hide the pain of loss. She’s fun and she’s dangerous in that ‘being hunted’ sort of way. The question is, will she accept who she is and that her destiny may be more than that of a scavenger? We’ll see, and we’ll have plenty of fun along the way with Vagrant Queen.

With Amae, Elida and Isaac aboard her (his?) ship, the Winnipeg, their getaway is a bit clunky as the engines start to fail. When last we see our trio, they are headed to a nearby planet in what looks a lot like crash mode. Additionally, it would appear Amae and Elida were making a little bit of bedroom eyes at each other. So, we’ll have to watch that little development to see what…develops. I liked Vagrant Queen. I enjoyed the vibe, the humor and the first vestiges of story that rolled out. Already some characters that I’m drawn to, which I view as a good sign. For a first episode, I’m drawn in. Hope your were, too.