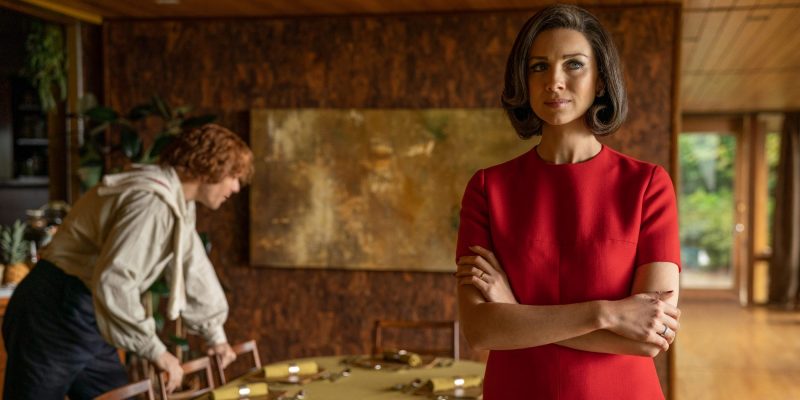 A risky yet satisfying episode rounds out Season 5, which I truly feel has been the best of the series. It was difficult, traumatic, horrifying… and so well put together that I have very little question about it. (Please look to the bottom of this post for information about a survey for the Outlander Gab.)

This passage in the book was incredibly hard to read, but Matt Roberts and Toni Graphia found a way to make it even more so. And they did it without being graphic, implying much of the worst of the violence, leaving it to our imagination. How many men raped Claire? How many were killed? Does it matter? Everyone involved will come out the other side changed for the rest of their lives.

One thing I do question, before I get into the little bit I want to say about the episode, is Roger and Bree’s non-adventure. More than half of last week’s episode is now unimportant. The individual pieces of last week, as I said then, were well done – of course, since Diana wrote the majority of the episode – but as I suspected, Roger and Bree went nowhere and “nowhen.” Now they know the Ridge is their home. Sorry, real estate in this show is precious – minutes are scarce, there’s lots of story that never saw the light of day – and to spend nearly half an hour saying goodbye? Yes, we got a beautiful Lizzie scene. And some poignant father/daughter time. But couldn’t this have happened some other way? It almost felt like a Roseanne Rosannadanna moment (and lately, what doesn’t). At some point next season, I’m assuming, they will leave successfully. Was it necessary to do this now? So we could get to the idea that this is actually home for both of them? 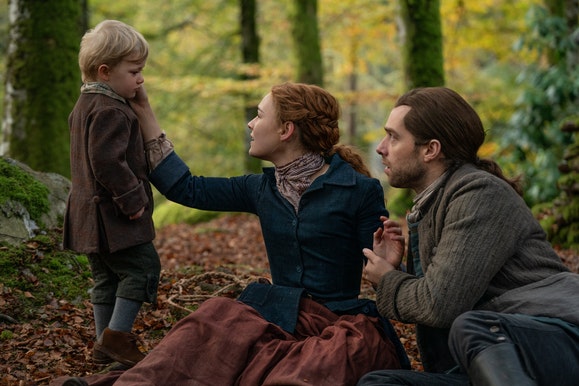 Lionel Brown was truly chilling. He has been a sneering, violent man since the minute we laid eyes on him. He doesn’t see women as people – more like possessions to be used and abused. His daughter, his wife; now Claire, who has dared to give women the idea that they can think for themselves; and Marsali, who refuses to do anything with a smile for him – except maybe inject him to death. His turn from sniveling, begging gravely injured patient to sneering, belittling master of the world was disgusting, as it was intended to be. “Lionel reaped what he sowed,” says his slightly more reasonable brother Richard. I think we would agree.

Oh, and Marsali has the quickest pregnancies ever. I truly need a week by week timetable of this season. But she’s fiercely protective of those she loves, and while she suffers for it afterwards, she’s willing to do what she believes must be done – and in this case, it’s to rid the world of this subhuman person. “You hurt me, you hurt my family, you hurt my ma. I will burn in hell before I’ll let you hurt another soul in this house.” Lauren Lyle has been fabulous this season – and she was amazing in this episode. It’s a crime, however, that we have seen so little of Cesar Domboy as Fergus. He’s basically been an extra all season – little airtime, fewer lines. Fergus has always been an important part of the Outlander world, but in the show, he’s barely noticed. 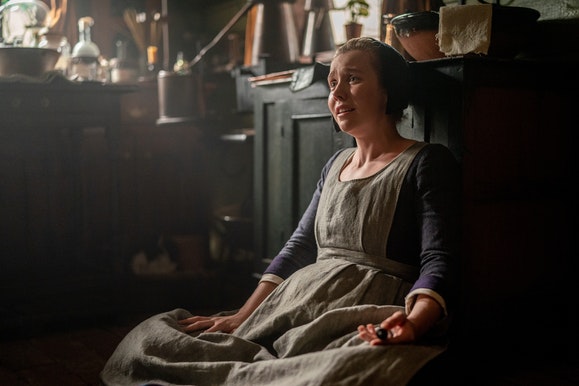 The only thing that would have made the fight scene better would have been a drum-filled musical background, like Clanadonia provided during the very first episode of S1, when Claire was running from Black Jack Randall. We have had a few battle scenes now where the sounds are just those of the fight, but the pipe and drums have long been used by Scots to instill fear in their enemies. Diana said that her imagery of Roger (in the book) playing the bodhran as they rush in to rescue Claire was inspired by this piece by The Corries, and something like this would have been very striking in that scene.

And the mystery of Wendigo Donner, fellow traveler, asking Claire if the name Ringo Starr meant anything to her. He had already pegged her as a possible traveler – noting that she didn’t act afraid of men, like women did in this time. He escaped the carnage, obviously, as Claire asked Jamie whether there had been an Indian among the bodies. “Did he hurt you?” he asks her. “He didn’t help me,” she replies. (And if you haven’t read the books, this entire scene alone is reason to do it. Read or listen. There’s so much more.) 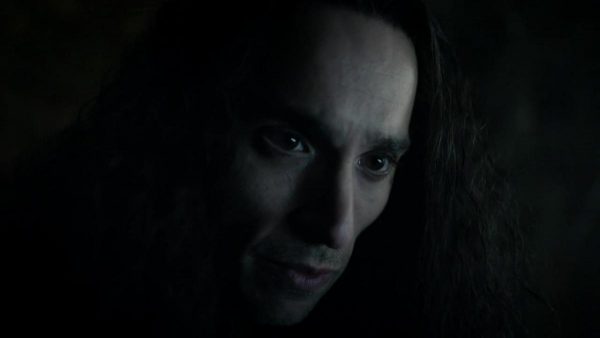 Caitriona Balfe is at her best when Claire is at her worst – as in the Faith episode of season 2, She truly lets you into her soul and almost turns inside out to show you the depths of Claire’s suffering. But you can also see the resilience within her, even if it’s been beat down to thin skin, and you know she’ll rise again.

No. I have lived through a fucking world war, and I have lost our child. I lost two husbands. I starved with an army, I have been beaten, I’ve been betrayed, I’ve been imprisoned, and I will not… I survived. And this – now I’m supposed to be shattered by this? Well, I won’t be. 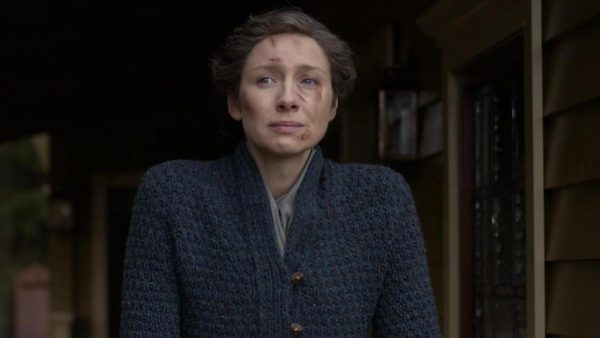 Bree’s quiet words to her mother as she leaves Claire to mourn in the bath echoed Lizzie’s after Bree’s own rape. “You have my hand, Mama, and my ear, if you need it. 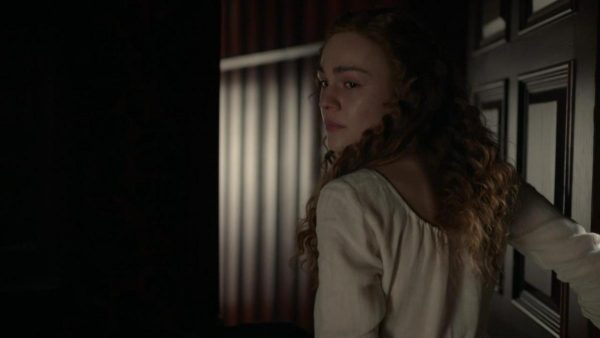 Jamie’s own declaration, near the end of the episode, echoed Claire’s.

I have lived through war, And lost much. I know what’s worth the fight, and what is not. Honor and courage are matters of the bone. And what a man will kill for, he’ll sometimes die for too. A man’s life springs from his woman’s bones. And in her blood is honor christened. For the sake of love alone would I walk through the fire again.

But in an episode where much of the action and dialogue was taken wholly from the book, and eagerly anticipated (albeit peeking through the hands over our eyes), I think the most looked-for piece was the most beautiful in the entire book series.

When the day shall come that we do part, if my last words are not ‘I love you,’ ye ken it’s because I didna have time.

The Risk Pays Off

I think every book reader had an idea of what would happen in this episode. What we couldn’t know, though, was the huge risk that Matt Roberts and Toni Graphia took in Claire’s dissociative dreams. Here’s my theory about all of this: while not nearly as satisfying, the 1960s life Claire led was much safer than living in the 1700s. She hadn’t been raped, kidnapped, beaten or imprisoned while living in that era. So, that was a more desirable time at the moment. And almost everyone at the dinner party, besides being someone she loved, was someone who needed something fixed – Jocasta needed her sight, Murtagh needed his love, Fergus needed his hand, and Marsali had been beaten in the same attack. So since she was safe in the 1960s, everyone else would be as well, safe and whole. Everyone except Jamie – Jamie needed no fixing. He only needed her, and she needed him. So since he didn’t need to be changed, she saw him as she always saw him, in his 1700s clothing, particularly as a young man when they first met, before all of the terrible things began in their lives.

Every little bit of these scenes had some significance – a callback to a previous event in her life, the horror of her current predicament bleeding through, her wish for everyone to be happy and whole. The missing part of course was Bree and Roger – she had no idea if they had safely made it through the stones, and she was in a unique position to know the terror of that passage. She had been separated from them once, but the reunion and birth of her grandchild had made them even more precious. So even though death had separated her from at least one of the Thanksgiving party guests, Murtagh, she knew for certain what had happened to him, and had no more worries for his safety. 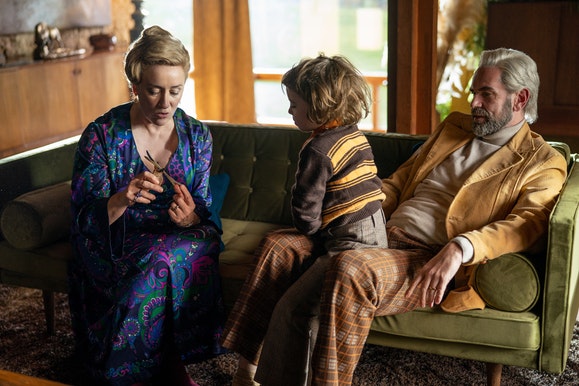 Claire is completely removed from these scenes – she sits up straight, staring off into the distance, not at all connected even in her own safe spot. She has a slight smile the whole time, and the only time she shows almost any life is when Jamie holds her, wrapped in his plaid, or swaying gently to The Association’s “Never My Love.” Only there does show any emotion. This was an amazing way to show Claire’s disassociation from her traumatic kidnap and rape – looking for the only place she can conjure up to take her away from her reality. 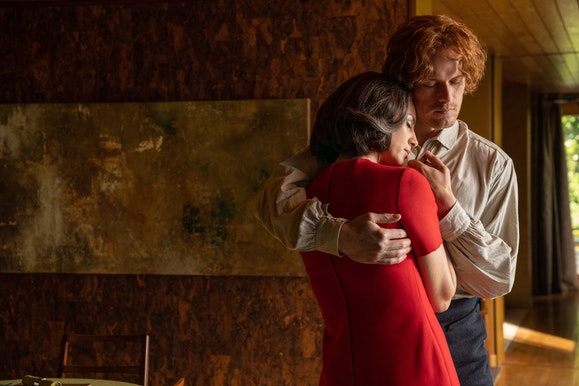 So even this safe place had its holes – its leaks in the ceiling, as it were, pushing through from reality. Gathered here are the “Easter eggs” that I’ve seen mentioned by other fans, some I saw on my rewatch but hadn’t seen mentioned, and an article that discussed some of it.

In an interview with Elle Magazine, Toni Graphia discusses one of the pieces of imagery – the orange. An orange appears several times throughout the sequence, and Graphia breaks down the season 2 reference to ELLE.com: “[It’s] a deliberate echo of the orange that the King of France gives Claire in Season 2, episode 207, ‘Faith.’ After Claire sleeps with the King of France to save Jamie’s life, when she leaves Versailles Palace, the last thing she does is pick up the orange and take it with her. It was a small gesture by Claire, a choice that symbolizes that she’s leaving with her dignity. Matt and I included it on purpose in Claire’s dream-escapes in 512: The orange being visible in the opening shot in her living room, then, when faced with the choice of whether to kill Lionel in revenge, Claire flashes on the orange—and then her walking out with it—a symbol that she takes the high road. She’s got a piece of herself that no one can ever take from her. We’re hoping the fans who remember the episode in Season 2 will get it!”

Here are other callbacks and Easter eggs: 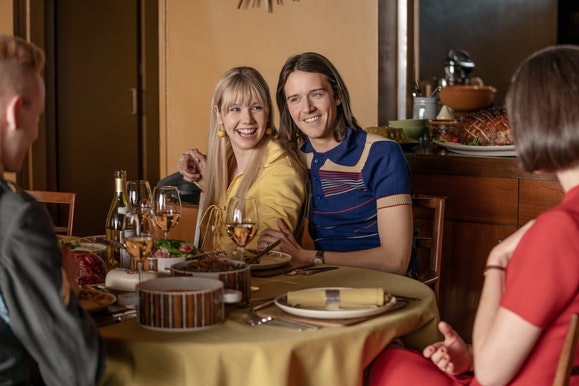 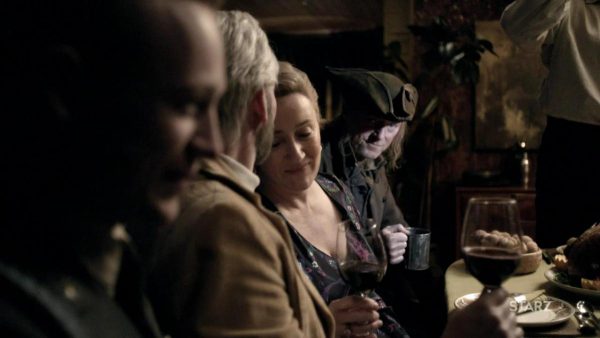 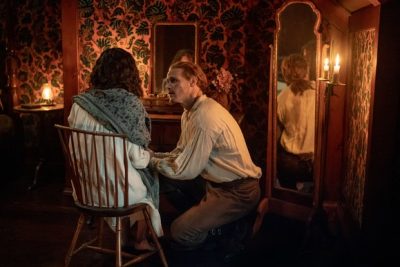 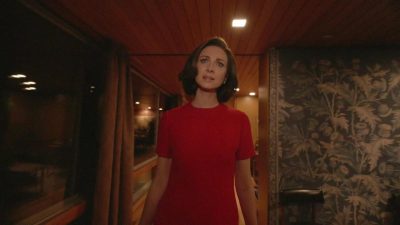 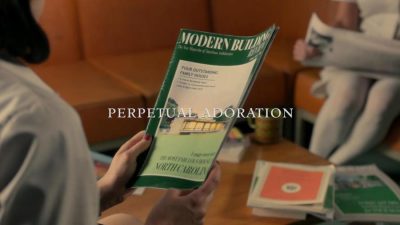 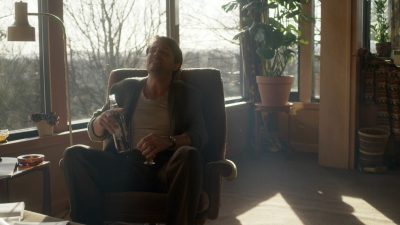 Did you find others? Comment below and tell me!

Listen to the Outlander Gab on the Air – we’re nearing the end of our season! We will broadcast tonight, Tuesday, May 12, and next Tuesday, May 19, to do a season wrap-up. Call in and chat with us! 9 pm east/8 central.

We need help! Please take  this survey about the Gab – it will take about 4 minutes – whether or not you’re a regular listener.
This will help us shape future seasons.

Thank you to Outlander-Online.com for the use of their screencaps.