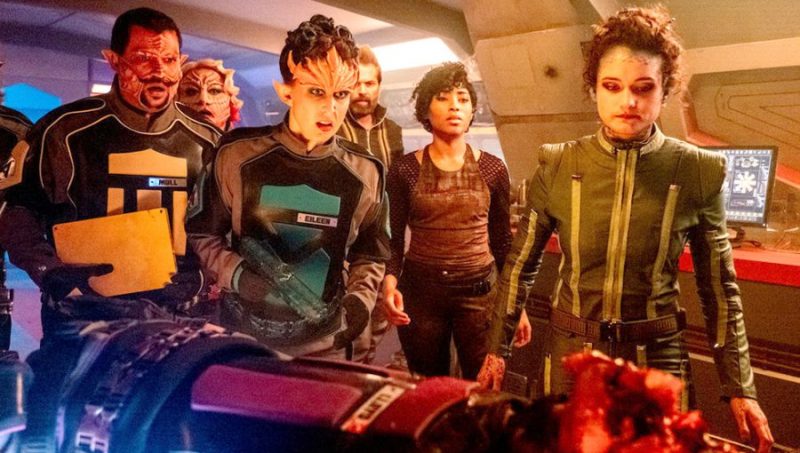 From time to time in a series you get an episode that confuses the viewer about what it’s purpose might be. And, on cursory inspection, that might be the case with Vagrant Queen’s episode 108, “No Clue.” It didn’t move the story along much, it didn’t really reveal anything vitally important to the ultimate goal – taking down Lazaro. But 108 is what’s referred to as a “bottle episode,” a self-contained little ditty that exists more or less on its own.

“No Clue” was a good, fun romp through the doors of sci-fi fandom. It was a wonderful ode to the movie “Clue,” which holds a special place in my heart, a movie that featured actors that I adore. While the title of this episode my have been “No Clue,’ the guts and heart of this episode was very much a “Yes Clue” moment and I loved it.

From the music to the sound effects to the classic Clue lines, “No Clue” was a call-back that I greatly appreciated. But before we travel through the old creaky door of the Winnipeg, it’s important to know that there are SPOILERS ahead. So, if you don’t want to be SPOILED, best to stop here. If you’re good to go, then let’s go. Let’s talk about “No Clue” and the fun vibe it gave us all, as well as a reminder that odes to older works are almost always a good time. 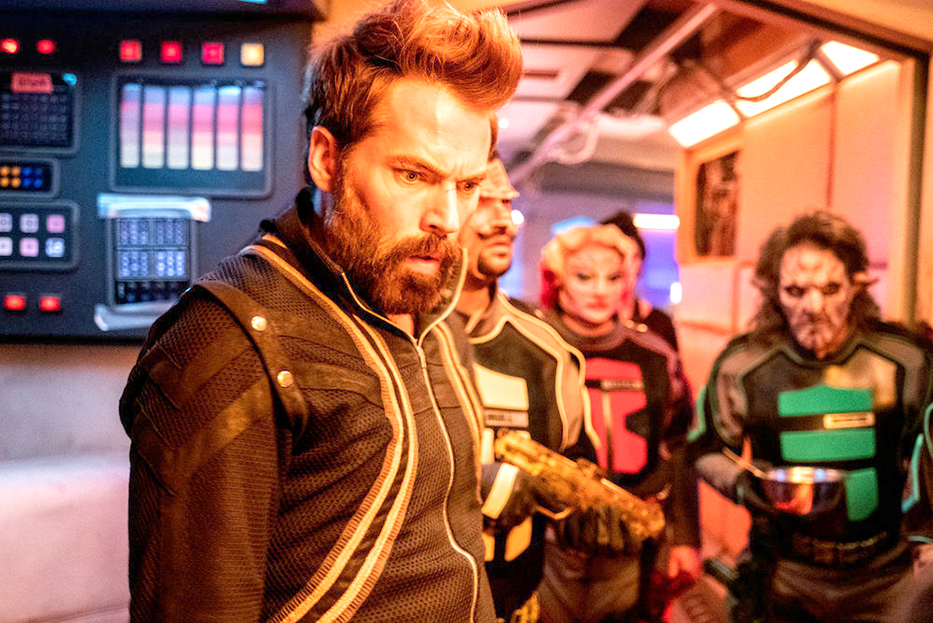 You know there’s a good time brewing when the opening scene is Isaac rolling a keg through the corridor with an additional six-pack tucked under his arm. It’s a good precursor to the generous amount of drinking and merry-making that’s going on early in the show. You have to admire Isaac’s penchant for irreverent frivolity throughout the episode. Isaac digs a full flask, baby. And for that, I begin my day drinking before 9 a.m. Thanks for the inspiration, Isaac.

I do love that their plan to get inside the palace, map included (Note the map. Look familiar?), is interrupted by a good old fashioned drink-fest. Everyone’s got their buzz on (Amae is an enthusiastic drinker, yes?) and having a good time when the Intergalactic Parking Authority commandeers the ship, shutting down power until the massive parking fines the Winnie has accrued are paid.

The map and door bell sound should be your first clues about the “Clue” vibe of this one, but there’s so much more. The group responses, the physical aspects that emulate the movie, and did you notice the name tags of the IPA? Yup, those are the names of the actors who made “Clue” the movie so much fun. Great little tribute to those folks. But let’s face it, there are too many good moments and call-backs to “Clue” in “No Clue” to properly catalog. But it starts early on and just picks up steam. 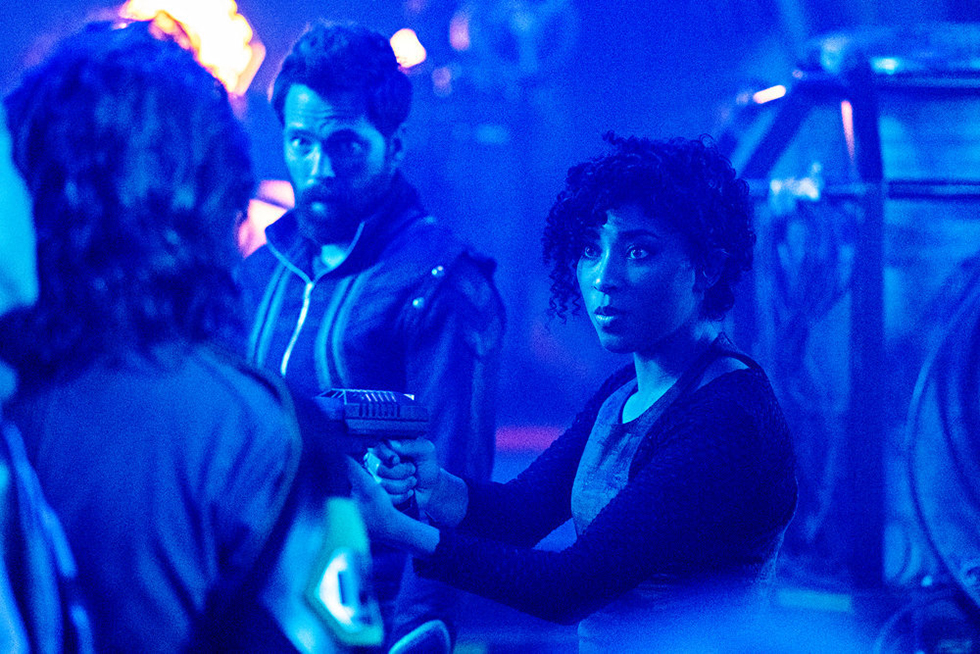 What also makes this a fun episode, even as the “Clue” aspect gets rolling, is that there’s a sense of healing going on with Amae, Isaac and Elida. The family is healing as they head for Arriopa and a showdown with Lazaro. Hey, that’s what revenge and healthy night of drinking can do – bring people together. However, there’s the Intergalactic Parking Authority to deal with – and soon, some sinister shit is going on. The variety of characters that the IPA brings onto the Winnipeg are so much fun, and take fairly accurate vocal and physical cues from the movie. Once you realize what’s going on, it’s almost a race to see how many things you can identify on Vagrant Queen that are a direct tie-in from “Clue.”

Suddenly, the lights go out and then there’s a body. And the bodies start to pile up and all the while, Isaac is enjoying nips at his flask on a regular basis. Did you notice how Isaac kind of saunters in a relaxed manner throughout this episode? A kind of intoxicated swagger as he rolls into one situation after another. I loved Tim Rozon’s work in this one. So damn much fun.

So, one of the parking police, Lloyd, has a bug. No, really. He has a bug he caught on a vacation and it is the reason that bodies start popping up. I kind of chuckled at how as Lloyd starts to double over in pain, everyone just kind of lets him convulse for a while as they talk, snack and drink. Turns out, the bug he caught and brought aboard the Winnie is looking to have a nice birth and then a very accelerated growth spurt. Lloyd was the host for a very deadly spider-like entity that begins taking a toll on the rest of the parking folks (Not to mention the food delivery guy). 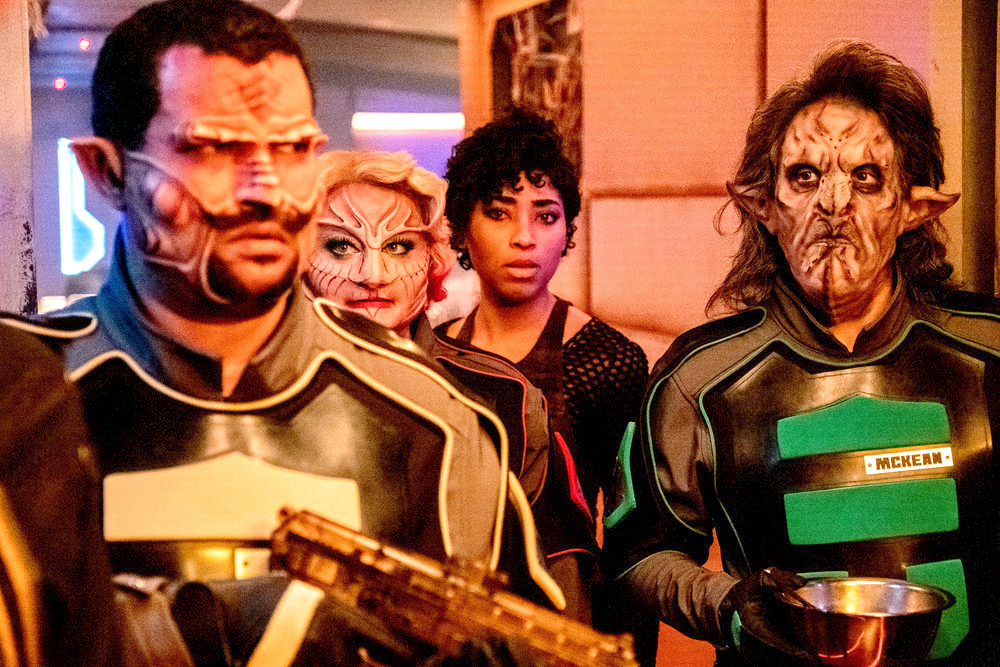 So, Isaac is drinking, Elida is perturbed, Amae (Elida and Amae…get on with it. You know what I’m talking about) is wonderfully buzzed and the hunt is on for what’s killing people one by one. We get a secret panel and pathway into the bathroom, fun sound effects all over the place, and even the requisite slapstick moment where two groups run into each other in the hall and everyone goes to the ground. After my second  viewing of this episode, I then found my VHS of Clue and watched it, then came right back and re-watched Vagrant Queen’s episode 108 again.

I have to say, the VQ’s did a very good job of incorporating a lot of obvious and subtle pieces of the movie into this episode. And I would recommend a re-watching of Clue followed by this episode just to get all the fun little bits and bobs that are sprinkled throughout.

Perhaps my favorite moment was later in the show when Elida, Isaac, Amae and what’s left of the parking crew look for more weapons. They open a cabinet and, you guessed it – rope, candlestick, wrench, pipe, etc. It was a fun throwback moment that solidified the episode’s ode to the cult classic movie and I really enjoyed it.

In the end, our gallant folks have to not only find the queen spider, but also get through a phalanx of the undead. That’s right, there’s a little zombie vibe in this one as well as the previously killed weren’t all dead, just mostly dead (Quick, what movie am I referencing here?). The queen planted her eggs into their brain and as the young spiders began to emerge, so did the bodies of the dead. But as with every good zombie flick, the key is usually to kill the head and the body will die. In this case, it was a stab through the mouth that did the trick. 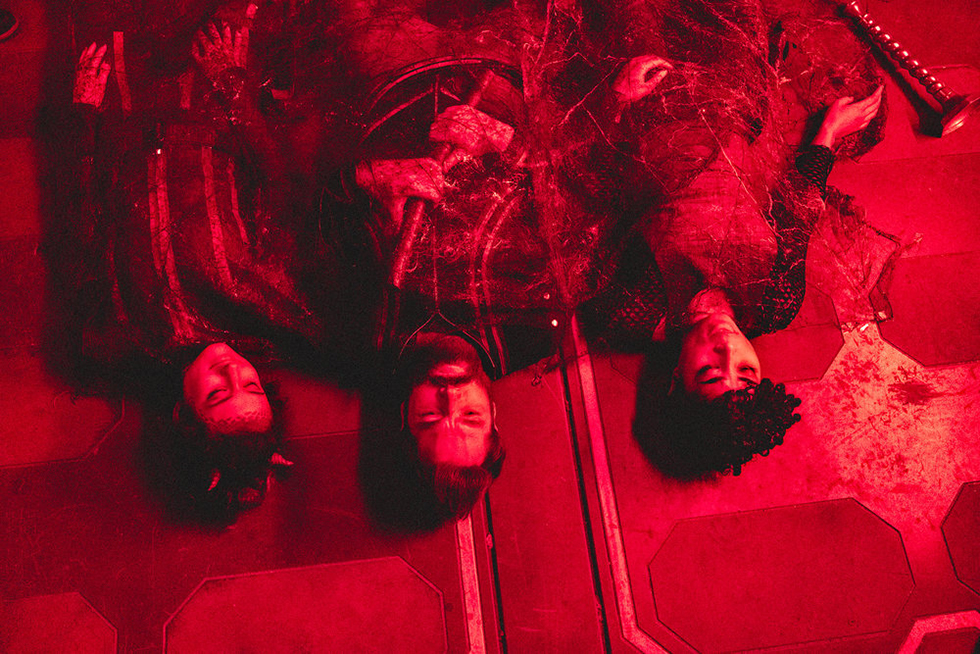 And that rumble with the undead leads to yet another one of those cool stop-action moments that Vagrant Queen has become so good at. I have been told that the actors have to hold those positions and be motionless as they are filmed. If that’s true, well done to you all. Elida’s one-legged kick is impressive. Wonder how long she had to hold that?

After that, it was just a matter of locating “mom” and taking her out, which as we know was probably easier said than done. In the end, however, our trio of heroes (with a little help at the end from Winnie B), dispatched the spider queen, managed to restart the ship’s systems and even erase their substantial parking fines as they dumped all the bodies out the air lock and resume their run to Arriopa. I thought “No Clue” was a fun, fun time and a nice little “bottle episode” to bridge the gap to the two-part season finale.

Couple things to note in this episode is the effective use of music and sound effects, as well as the many different shades of lighting that were employed. There’s a lot going on in and around the “Clue” vibe, which I though was really well done. Now, the gang is headed to Arriopa and I have little doubt that even as Lazaro makes a play to consolidate his power, maximize the Sterzaad and continue to deliver wonderful profile looks (You’re a handsome malevolent despot, Lazaro), Elida, Amae and Isaac will have a few surprises for him. In fact, I suspect the last two episodes will have surprises enough for all.