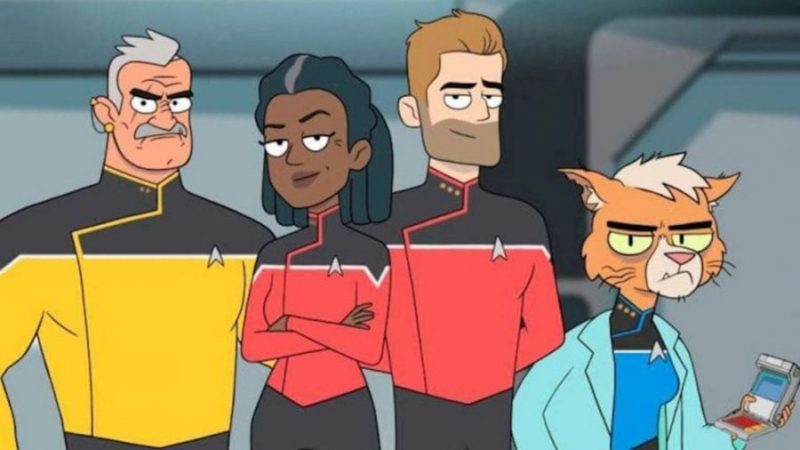 The eternal argument about what’s ‘Trek’ and what isn’t ‘Trek’ seems superfluous to me on many levels as the continued quest to get inside the mind of Gene Roddenberry makes no sense. As with all forms of creativity, the root will sprout many branches and they will all be different even as they bare similar fruit. And that’s where Star Trek: Lower Decks finds itself as it explores its place in the Star Trek realm. And for my money, it’s doing quite well.

A few episodes into the new animated CBS All-Access offering and I find that even with the flat, simplistic animation that Lower Decks inhabits, there is plenty of interesting things going on – as well as the joys of simple entertainment. I make no secret of the fact that I like Lower Decks, and I accept it for what it is and what it looks like. I also accept it for the important messages of family, acceptance, cooperation, tolerance and curiosity that it delivers, messages that are very on-point in the Star Trek realm.

By no means is this the best “Trek” offering out there (I’m still very much a DS9 guy), but I don’t think it’s out of the realm of reality to say that it is very ‘Trekkian’ in its delivery and messages. Lower Decks offers up very defined and unique characters, and has done a good job of fleshing them out quickly, so that you get a good sense of the dynamic that’s already brewing within the main group of characters – for good and bad. But even that dynamic allows for morphing relationships and common cause. I like that, even though the animation may throw some off the Trek scent, Lower Decks does adhere to Roddenberry-like principles.

Early on, I was struggling with the show’s leading light, Ensign Beckett Mariner, played with gusto and energy by Tawny Newsome. I found her energy level and complete lack of ability to listen or stay in line with what’s expected of her a bit off-putting. She’s definitely the loose canon aboard the good chip Cerritos, but it’s a spirit born of her incredible intelligence and zest for life. Yes, she doesn’t like to follow the rules, or the rest of the pack (and her mom is the captain, it turns  out), but as the episodes have moved along, we see she’s basically a good person who needs her intellectual bank filled often. When it’s not, she finds her own ways of doing things. Mariner, whose irreverent attitude about promotion and Star Fleet’s politics can come off as disrespectful (and it is), but Mariner is a character that pops off the screen, even in that flattened animated state. 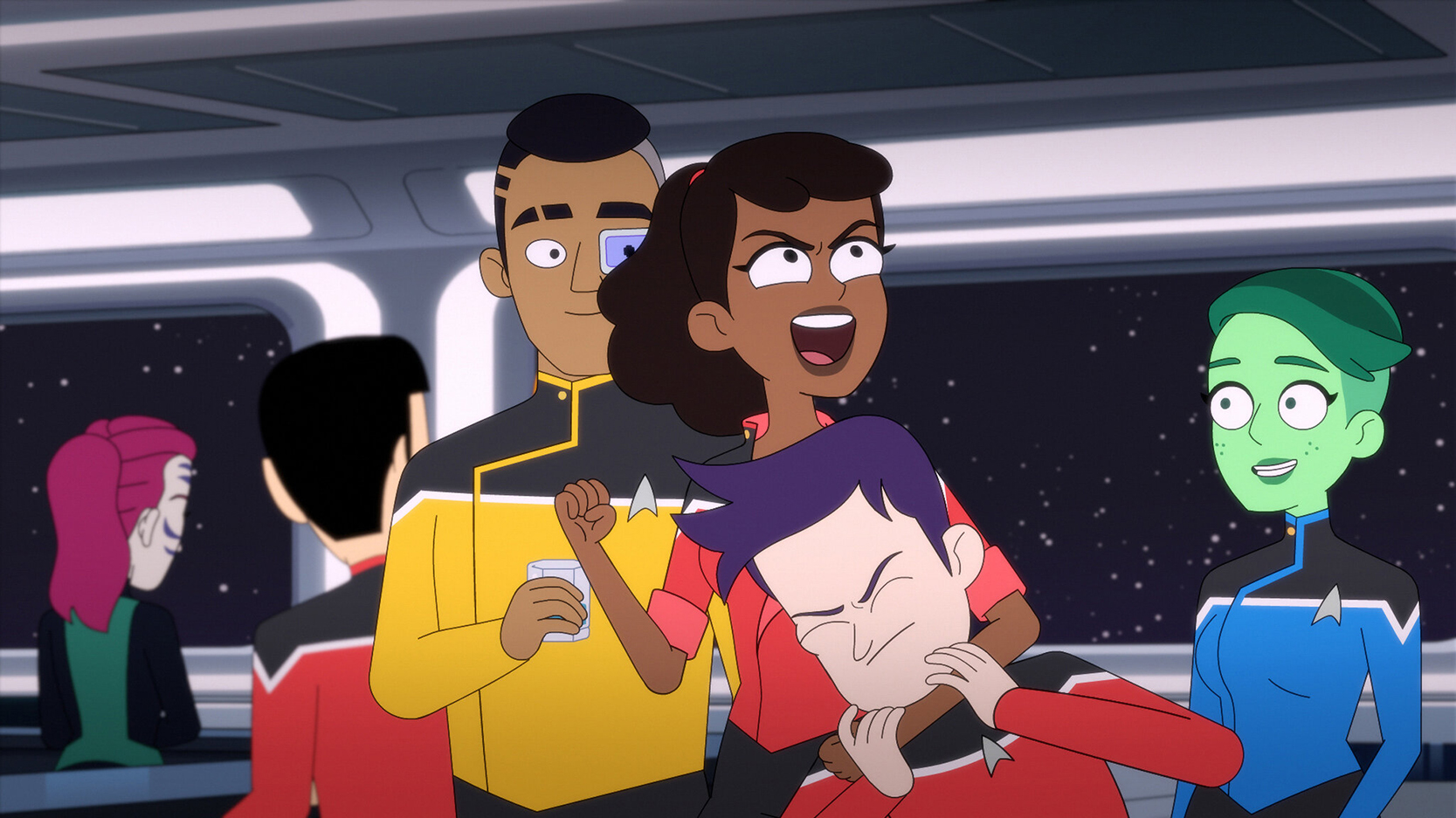 But she’s not the only one. Ensign Boimler is often Mariner’s unwilling foil aboard ship. He’s as straight-laced as they come and sees his path to promotion running right through the Star Fleet manual. In short, he’s a the complete opposite of Mariner and while they knock heads repeatedly, beneath his burgeoning jealousy and her continued taunting, there is a growing friendship and respect between the two. They’ve been through some stuff and there is a bonding that has gone on. Boimler, for all his stickler for the rules mentality, is another character that is well-defined and fun.

Ensign Rutherford (voiced by Eugene Cordero) is an engineer’s engineer as his young career begins. Even with his passion for Jefferies Tubes and all things engineer-oriented, he faced a crisis of faith in his chosen career path. After exploring other options, he realized that following his heart was following his dream. Ensign D’Vana Tendi, T’Ana, Jack Ransom, and the others have all had their moments in the early going of Lower Decks, and I’ve enjoyed it immensely. One of my favorite characters is Lt. Shaxs, the Bajoran security officer who definitely has an iron fist mentality to his job, but also demonstrated a passion for the people working under him. I liked that and I like this character a ton. 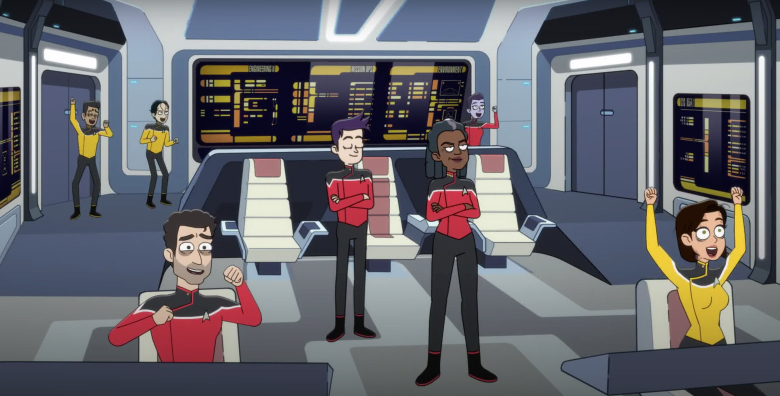 And overseeing it with both confidence and no small amount of insecurity is Captain Freeman, played nicely by Dawnn Lewis. The Cerritos is a ‘second contact’ ship, so the missions aren’t always that glamorous, and as we see with the lower decks crew, the jobs are often mundane or downright yucky. But, Lower Decks offers a feel for all that’s going on aboard a ship that none of the other Star Trek iterations really ever delved into. Sure, it’s animated, but it’s done well and once you get past that issue, you begin to see interesting characters living their best Star Fleet careers – many of them just starting out. It’s a perspective I have enjoyed getting a glimpse into and one that I think is interesting.

Star Trek: Lower Decks is worth some of your viewing time and certainly worth a place in Star Trek lore. The messages within its half-hour shows are still the messages and hopes that Gene Roddenberry would have believed in. The show is funny, irreverent, comfortable, intriguing, and most of all entertaining. And, most importantly for many, it’s got honest Trek running through its DNA. I’m a fan and hope that it can stick around for a while.