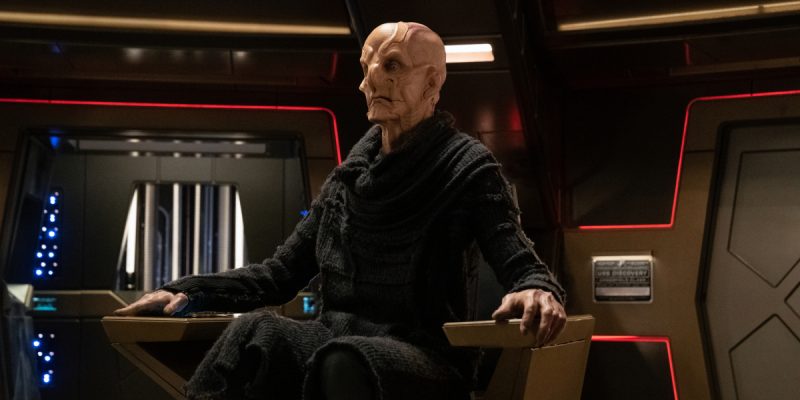 After an excellent season opener last week, I was a little nervous about the rest of the third season of Star Trek: Discovery. But watching the second episode, I think I can start to relax – just a little bit – and enjoy the ride. Not literally – who would have wanted to go through that wormhole with the Discovery crew? It looked BRUTAL. And then the crash into parasitic ice, and the nerve-wracking attempt to lift off – no, I’m happy I’m here on Earth, but just as happy that the season seems to be in good hands.

This week here in my corner of Earth has been a little frantic, so I’m just going to give you some of what I saw as the highlights of the episode, and I welcome your own thoughts on what really hit you about this episode.

Saru has really come a long way. His evolution, almost literally, has been tremendous. From a genetically frightened-of-everything, anxiety-ridden, confidence-lacking crew member to a leader confident enough to stand up to the ever-intimidating Georgiou, Saru is now someone to respect. The care he exhibits in every aspect of his dealings with his crew is completely admirable. He no longer second-guesses his decisions, or believes that someone, anyone, could do it better. He understands his role – protector of these 72 – no, 88 – people who have leaped into the void for the sake of a totally unknown future. 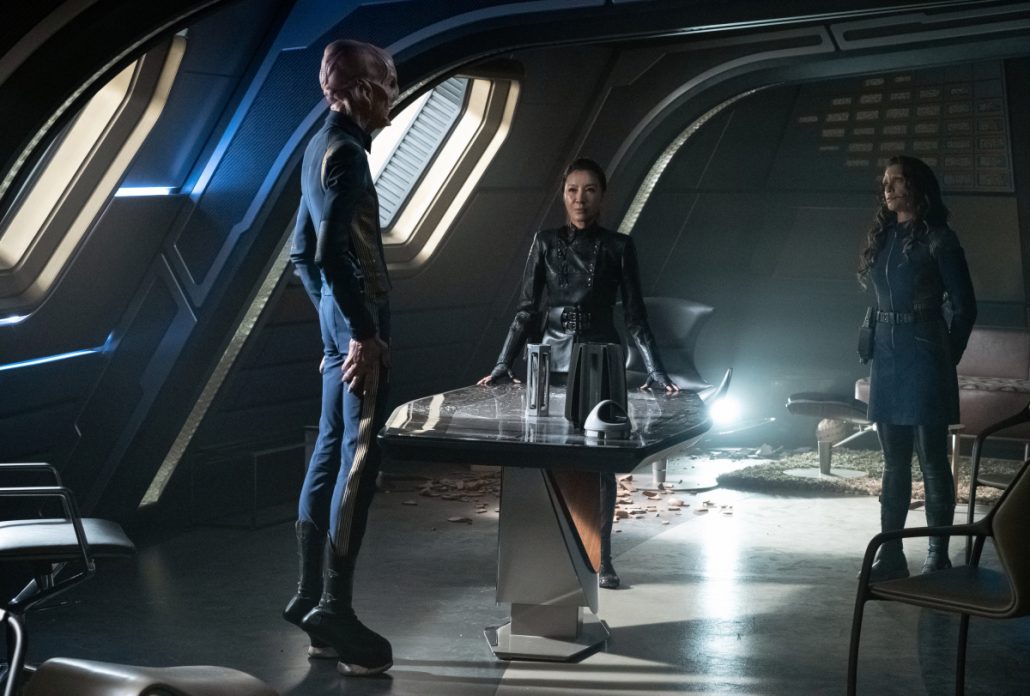 It’s entirely fitting that he was the first to begin to recover as the ship came through the wormhole. Calling to his bridge crew to get moving and to try to save themselves, he regained his footing and exhorted the crew to action. He got them to respond to the crisis with solutions, insisted they team up since there was no communication available, and had a showdown with Georgiou over next steps. One thing that surprised me – Saru’s deadly head spikes. Where did those come from? Is it an ability he even knew about, considering the Kelpian fear response? Is it an adaptation that only came out once his ganglia were removed during his non-death? How did he even know how to use them? A quick shake of the head, and… PHFFFT! Are they a one-time use thing, or do they recharge?

With a few exceptions, the bridge crew did recover, and tragedy was averted – but what happened to Detmer? She’s wandering around, brain seeming to just stop. Dr. Culber looked very concerned as she walked past him in sick bay. What possible issues could this cause in coming episodes? Because you just know something’s going to happen, and didn’t we just have this with Aryam?

Oh, and how I love Tilly and Mary Wiseman’s hair acting….On their trek to find the ribindium, Tilly stress-talks as they set out. “Why did you ask me to accompany you, sir?” she asks Saru. “I needed an engineer,” replies.  “An engineer I can trust… We are introducing ourselves to the future. And you, Ensign Tilly, are a wonderful first impression.”

Tilly does make a great first impression – and comes up with the acceptable solution of trading repairs for dilithium. Before they meet the settlers, before they’ve left the ship, she determines that this planet does have warp capable ships, but does NOT have dilithium – therefore, that’s something they need. And it turns out to be just the thing, both for the settlers and for the bad guy, Zehra. I loved how she kept her cool under threat. “I’m good,” she tells Zehra. But the one thing she isn’t is a fighter, and here was a great intersection of Tilly and Saru – his quick aside to her – “at my mark, get behind the bar.” But she did her part at the end, hitting Zehra over the head with a bottle.

Everything But a Horse

The whole idea of Star Trek as a Western in space came to life in this episode, and – well done! Much better than a holodeck exploration. Even the spurs jingled! Smart bad guys, knowing most of what’s going on (he even quickly figured out they were time travelers – must be a fairly everyday thing in the future); a dimly-lit bar with just a few silent patrons; guns pulled on the newcomer. Even the helpless townspeople, needing to be saved from the despotic villain by the newcomer strangers. 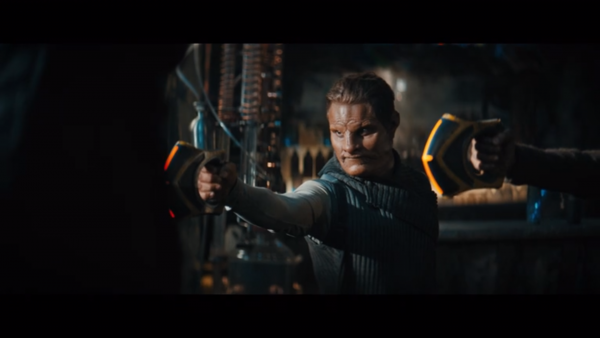 The music – which I have ADORED throughout the series (and which will be next week’s Ready Room interview) – transitioned to full-blown spaghetti western by the time the defeated Zehra walked out the bar door to try to survive in the night’s parasitic ice.

And speaking of the defeated Zehra – GEORGIOU!! The original-universe Georgiou was a great leader, I’m sure, but the alt-universe Emporer is one mean mother. And I love her. Questioning Saru’s choice to bring Tilly with him to search for ribindium – “Are you trying to get us all slaughtered? She has as much psychic dominance as a kitten.” Talking with Naahm about why she stayed on the Discovery – “Section 31 would have begged me to take over sooner or later, and bureaucracy is where fun goes to die. I like jumping from universe to universe.”

And the bar fight scene – she shows up, all by herself, takes three hits from a nasty-looking phaser to get the bad guys worked up and cocky, and give Saru time to maneuver, then EXPLODES. Who knew that a tiny piece of dynamite had such an impact? Well, I guess if you knew her in the alternate universe, you’d have some idea. And her nature is not to stand down, but to take no prisoners, and you can see how hard it is for her to give into Saru’s command and let Zehra walk out into the night. Not without a final word, though: “And if you manage to live, if I hear anything punitive about this settlement, I’ll come back and rip your throat out.” 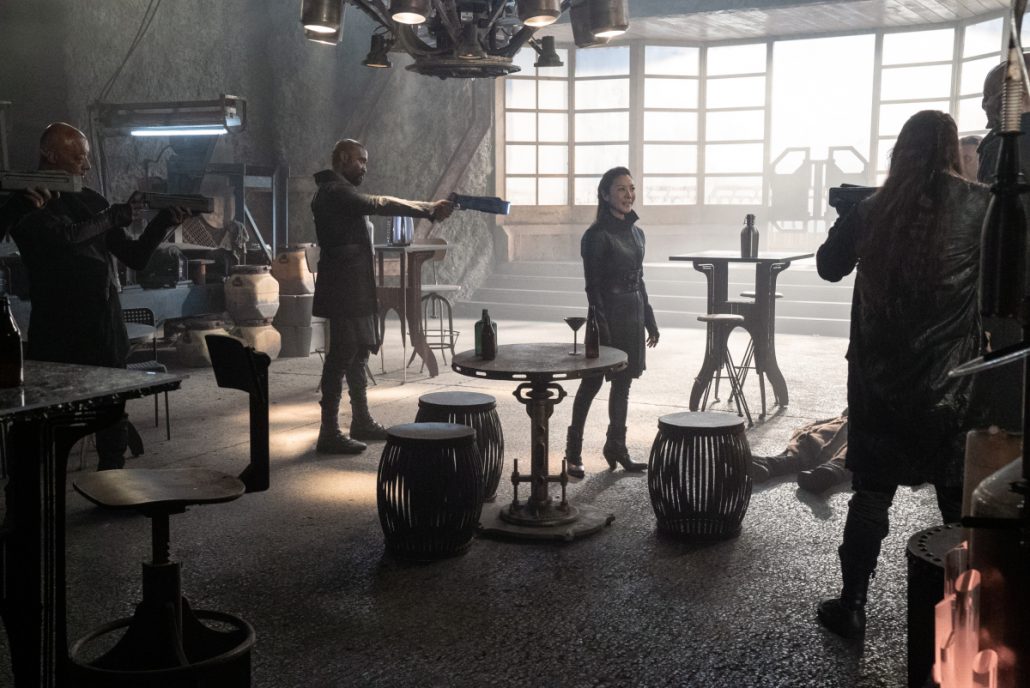 There IS a softer side, somewhere, to Georgiou, and even Saru realizes it. Talking to Tilly as they’re initially walking to the find the ribindium, Tilly laments that Georgiou thinks she’s useless. “She’s concerned for Michael. And lacks the self-awareness to control herself in such an unsettled state.” She hasn’t been able to separate the Michael she raised as a daughter in the alt universe from the “real” Michael, and remains attached. You can see the relief on her face at the end of the episode, when she sees Michael on-screen, in tears, ecstatic that she’s finally found Discovery. Now, Georgiou can move on emotionally.

Do the rest of you love the Stamets/Culber relationship? Stulber? Camets? No? OK. I think they’re lovely together, and I felt so sad last season when Hugh came back to life, but had to reconcile the fact of his death with his new life. That reconciliation didn’t have room for Stamets, or almost anything else, it seems. Paul had barely been able to move forward, to accept that this man had been the love of his life but was now out of reach, and he was doing a decent job, given the fact that they still had to live and work in near proximity. 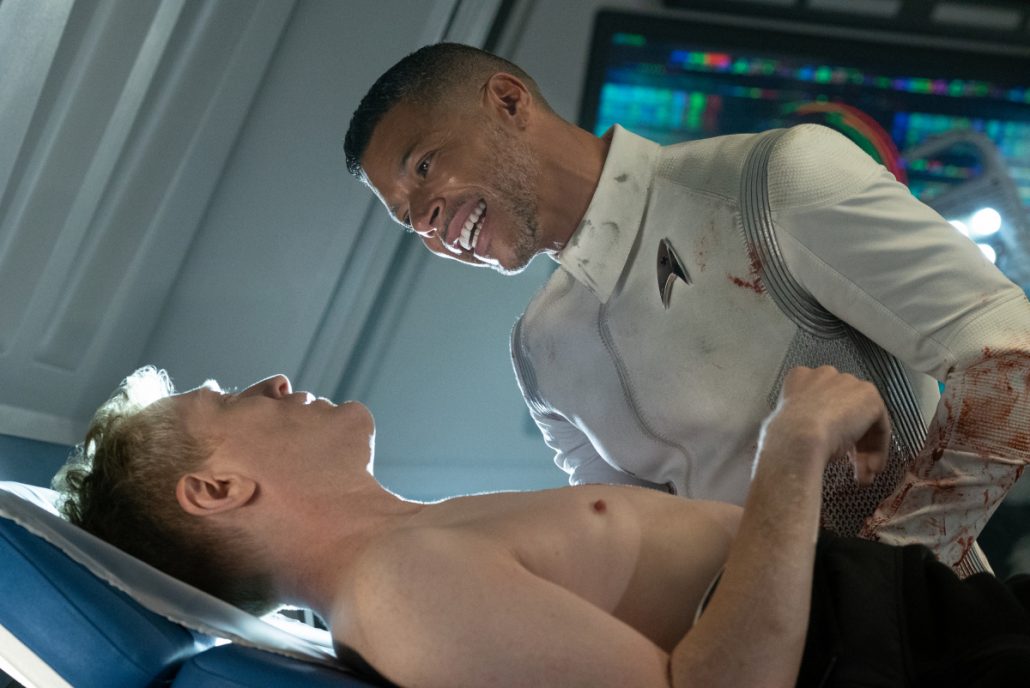 But the longing doesn’t leave, and I was very happy to see Hugh make that emotional leap and realize that he still loved Paul once he got over his anger and emptiness. It seems he just jumps back into the role of lover, not having it with Stamets’ insistence on getting out of the biobed and jumping back to work. “I’ll let you out if you can spell mypartnerbroughtmeoutofacomaandalligotwasthislousyt-shirt. Spell it.” He’s quick with a quip, but it completely shows his love – and frustration. And when he finds Stamets has disobeyed doctor’s orders and reinjured himself, he tries – he really does – to be supportive. “Everything’s going to be all right. We’re going to do all of this slowly and carefully, because I need you out of there so I can kill you.”

My Name is Gene

This season’s lighter-hearted bits are wonderful. Season 2 was very serious and dramatic, but Jett Reno’s sarcastic yet caring quips; Tilly’s frantic anxiety chatter; and Michael’s drug induced observations all fit perfectly, and keep the viewer interested. I hope they continue.

Are Starfleet and the Federation hiding in the cracks and crevices of the universe? Even after the mysterious Burn, there has to be something still out there. Cal and Zehra knew of them; the assistant Michael met was also a keeper of the flame. Where is they? What happened? What WILL happen, who is left? This is an intriguing plot line, and I’m looking forward to seeing it play out.

Another major question – is “Leland” really gone? The nanites are still on Discovery, unless they disposed of it out the door. Could the chamber and its magnetized floor really have disabled them, or will Control survive to inhabit some other body, get the info they’re looking for from Discovery, and get back to the original time to continue attempting to recreate the artificial world? Is that how the Burn happened – only a partial reconstruction? Too much to think about, circular time travel has always given me a headache.

Final note – did you watch the lovefest that was the Ready Room this week? It was quite fun to see Doug Jones and Mary Wiseman talk about their characters’ journeys, Mary’s “hair acting,” and their stories about Jonathan Frakes singing. I love all the backstage info and the interviews, but I can’t say I’m overly fond of Wil Wheaton – he seems a little too eagerly smarmy for me. He’s a good interviewer, and knows his stuff – I’ll manage to get through it all because it really is fun.

So leave me a comment – what did you like and dislike? Were there classic Trek callbacks that I’ve missed (since, as I told you last week, I don’t have the strongest of Trek cred)? I’d love to hear from you.