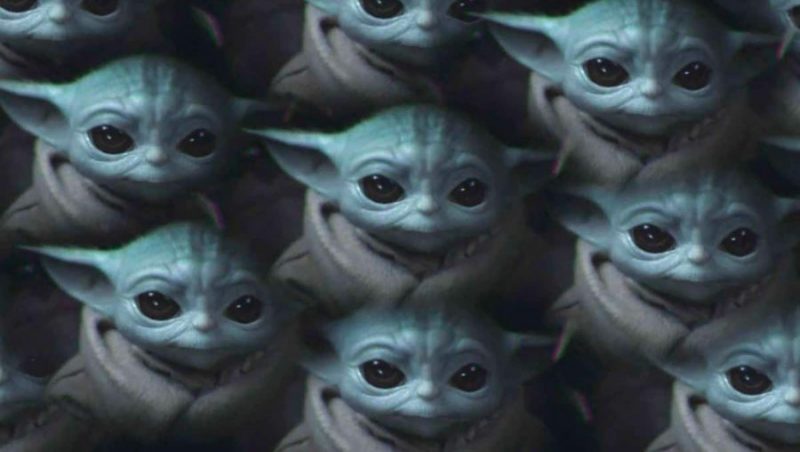 The Mandalorian: Mando Learns Not All Mandalorians Are The Same – Review, Ep. 203

I had to feel a little sorry for “Mando” in Chapter 11, “The Heiress,” as he appears to have been taught some things about his people that may not be as accurate as he thinks. The Mandalore code, it would seem, isn’t as cut-and-dried with some elements of the Mandalorians as it is with others. There are factions.

The road to finding others of his kind finally pays dividends in chapter 11, but it’s a meeting that tells us much more about Mandalore society and, perhaps, leaves Mando questioning his own code of honor and the people who taught it to him. “The Heiress” provides a nice little movement in the hunt for The Child’s people, though there’s a definite feeling that for every step forward, there’s another step backward. In this episode, directed by Bryce Dallas Howard, Mando lands the Razor Crest on the planet Trask with not only a thud but a splash.

The ship is a mess and he’s hoping to get it fixed so he can continue. The end result, I must admit, is quite funny. Talk about putting that ship back together with bailing wire, duct tape and spit – the Razor Crest will need some serious repair work in the future. The crew at the Trask shipyard apparently don’t let 1,000 credits go too far. But that’s at the end and it’s wonderful to hear Mando’s overall disgust at the work done to his ship and the ship’s overall condition. It is a wreck.

With some help from the Frog lady’s husband, who greets her on the dock, Mando heads to a cantina where he’s put in contact with a Quarren, who tells him he can sail him to where other Mandalorians are. First off, that should have sounded some alarm bells right there. Secondly, this port is more of a Tortuga-like pirate and smuggler area than a pleasure boating place, and it seems that nothing good or easy comes of making a deal in a dark cantina.

Naturally, the Quarren tries to kill The Child and Mando (curse your sudden but inevitable betrayal) for his Besker armor, when we get some Manalorian drop-in action. A trio of Mandalorians jet onto the ship, kill the pirates, dive into the water to save Mando and the child, as well as kill what can only be described as a sea-going Sarlaac. It’s here things start to get interesting and fun. The long-awaited arrival of Katee Sackoff as Bo-Katan Kryze reveals itself when our three rescuers nonchalantly take off their helmets.

Now, remember how Mando reacted in “The Marshal” when he took his helmet off? You can imagine how our hero bristled at this imagined slight of the Mandalorian code. Well, there’s a reason. Mando was apparently raised by a splinter group of Mandalorian society called “The Watch.” They seek to remake Mandalorian society in the image of the old ways. That’s not really Bo-Katan’s game, nor that of others who follow her. She and her people aim to take Mandalore back with the help of weapons and ships they are stealing from what can only be described as a den of Empire holdouts. They have ships, sparkling clean uniforms and seem to be operating as though the Empire still exists. Think Nazis in Argentina.

I’ve seen the hypothesis that given this is five years after the explosion of the second death star and the crumbling of the empire that perhaps news hadn’t filtered out that the Empire itself had crumbled. I don’t think that seems likely, so I view this as an organized group of loyalists who simply aren’t prepared to see the empire disappear. Moff Gideon, who shows up in this episode via transmission, certainly had that vibe when we saw him in season one. No, these stormtroopers are in clean and shiny armor, the officers still wear their neatly pressed uniforms – this is an overt act of loyalty to the empire that is being fomented in corners of the galaxy.

Who is financing this obviously expensive undertaking and why? I’ve seen some conjecture that this is the seeds that will eventually sprout into the First Order later on. Whatever its manifestations, it was interesting to see that out on the fringes of the galaxy, the empire’s influence is not only felt, but seemingly untouched. In truth, it kind of surprised me and I had to reread the show synopsis to make sure I had the timeline correct. Sure enough, these appear to be well-financed holdouts, not some warlord led group of opportunists. Talk about interesting developments.

Mando helps his three new Mandalorian friends plan and pull off a heist of an imperial ship and its cargo of weapons. It seems that Bo-Katan is of royal blood (Hence, “Heiress”) and desires greatly to rebuild and rule over the new Mandalore. The whole discussion with Mando is so fascinating in that he’s been trained up in this very strict, very definitive way and now he has to come face-to-face with the real possibility that he’s part of a radical splinter group – not part of the Mandalorian whole. Mando has been very confident about what and who he is within that Beskar armor, but now he’s been kind of slapped in the face with a new Mandalorian reality, and some superstitions that aren’t really true.

“Don’t believe everything you hear,” Bo-Katan tells him when he notes that Mandalore is a “cursed” planet. It’s clear that Bo-Katan and her companions give “The Watch” a side-eye look as being a tad on the kooky side. Interesting vibe from those three as Mando kind of prattles on about the code.

There’s also a fun moment in this episode as Mando, Bo-Katan and her two comrades are sitting atop the Razor Crest looking at the ship they will later attack. When talking about the ship’s complement of troopers, one of the other Mandalorians notes they are terrible shots, they couldn’t hit a Bantha. A nice little ode to the running joke that Imperial stormtroopers seem to fire away and not hit anything in past movies and TV shows. And as they assault the ship later, yeah, that holds true. They are crummy shots, it appears and drop like flies in a cloud of pesticides. Much like Star Trek redshirts always die, Star Wars stormtroopers can’t hit anything. 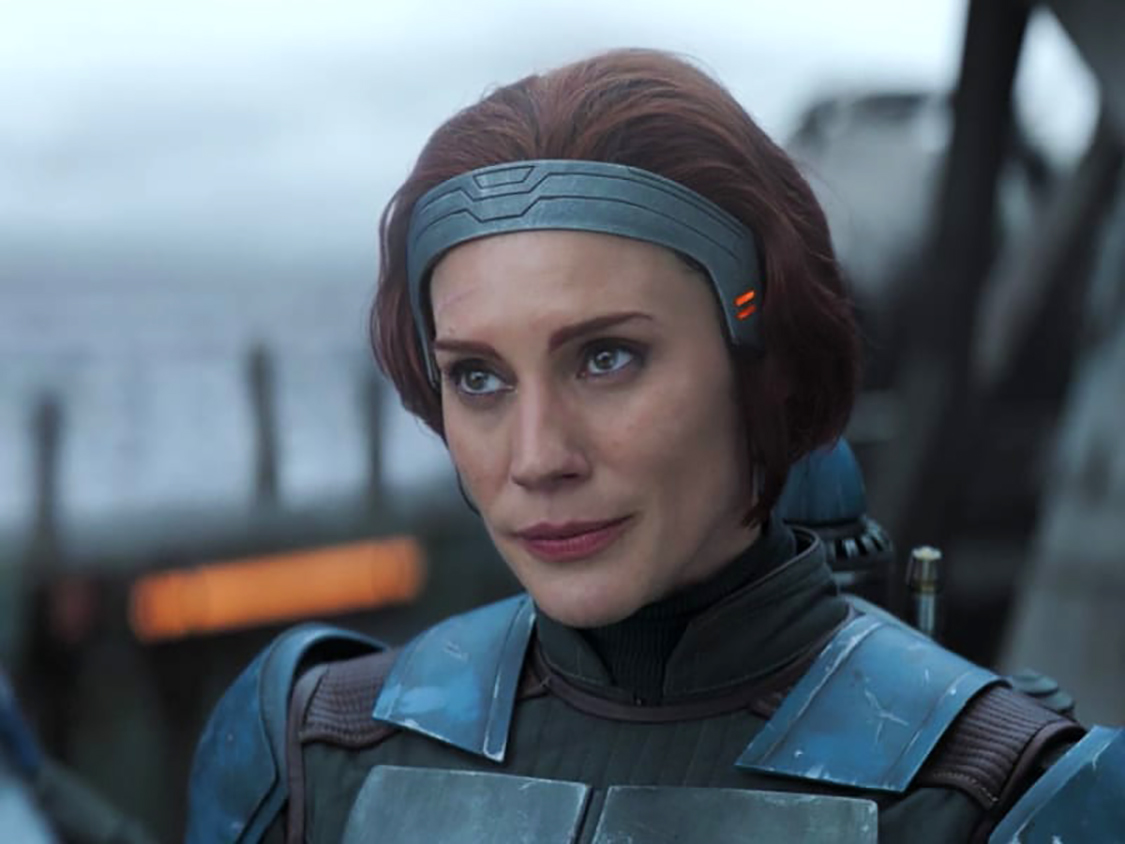 Katie Sackoff at Bo-Katan Kryze in The Mandalorian episode 203, “The Heiress.”

While Mando has some things to think about even while assaulting the ship, we get our look at Moff Gideon telling the commander of the ship and his two pilots, who are the only three left, that they know what to do. The commander kills his co-pilots even as “Long live the empire” echoes in the cockpit, shouted by both Gideon and the commander. Another clue that the influence and dreams of the Empire aren’t necessarily dead on the fringes of space.

To sum up, the attempt to crash the ship and take everyone and everything with it is thwarted and the commander commits suicide while in the clutches of Bo-Katan, who is questioning him. What does she want to know? Where is the Darksaber, which she apparently needs to solidify her rule, and does Gideon still have it” She knows the answer to those questions, which kind of sets up a showdown, I’d think, between Gideon and Bo-Katan. That should be interesting as hell, I’d think.

Of course, it’s fantastic to see Sackoff as the live-action version the voice role she had for both “Clone Wars” and “Rebels.” She’s a fantastic actor and this role just slides off her talents like butter off a hot knife. I admit, I was a tad enthralled by this character and Sackoff’s portrayal of her. Strong, proud, dedicated – plenty of traits that Mando himself possesses. The fact we’ve learned that there are two factions (that we know of) in Mandalore society is very interesting. Should be interesting to see Mando pondering what he’s learned. 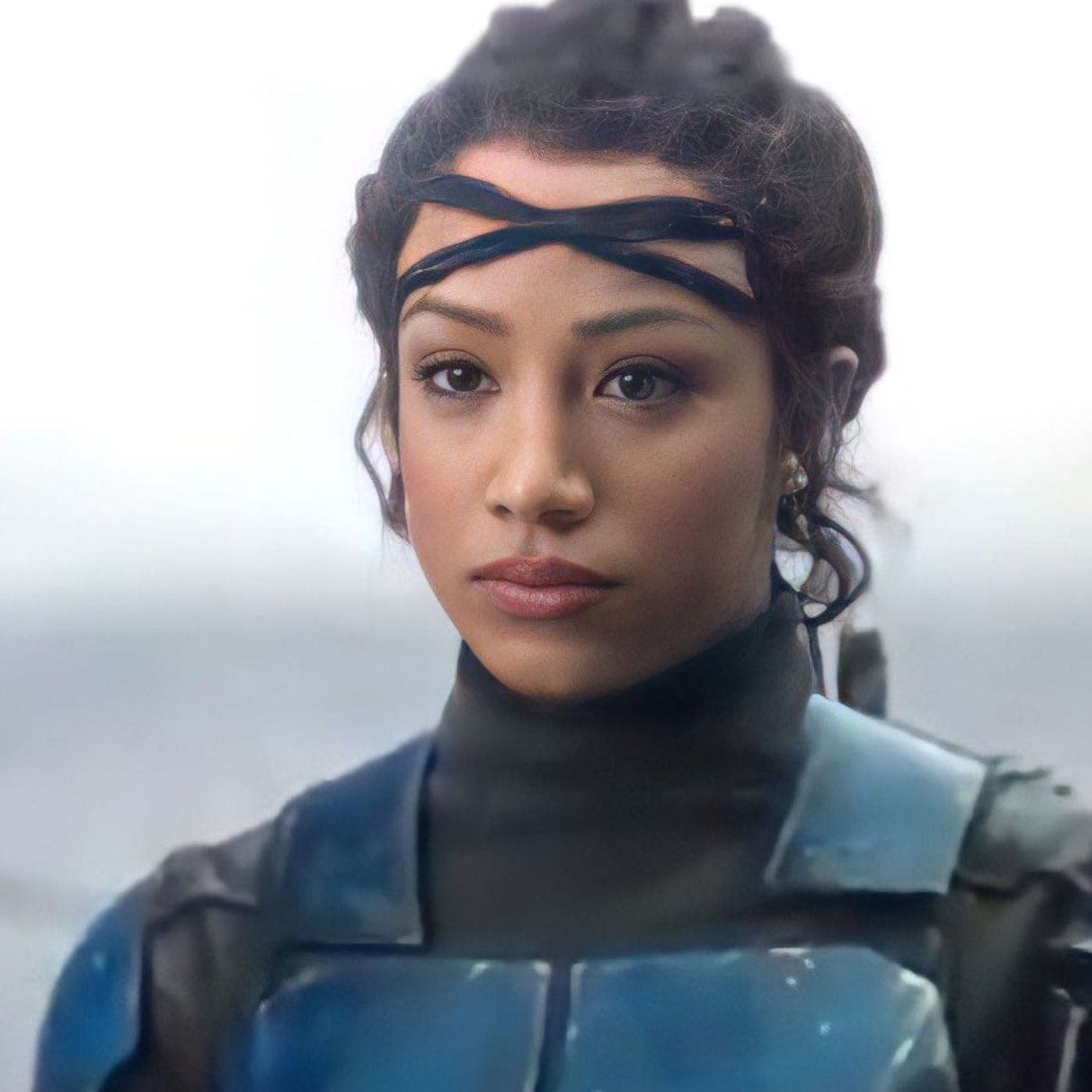 Sasha Banks in The Mandalorian episode 203, “The Heiress.”

All the while, The Child has been left with the frog people and a strange thing has happened – he’s gotten a little perspective those eggs he was eating. Perhaps the multiple attempts at things eating him in the last two episodes, coupled with one of the eggs hatching, have left the little guy a little more aware of life around him. We see him playing with a hatchling when Mando comes to fetch him for the take off. It’s clear the little green guy doesn’t want to leave his newfound friend, but leave he must.

One last surprise pops up late when the name Ahsako Tano is uttered. Mando is now off in his wrecked hulk of a ship to look for this character, another name that sends chills of excitement up the spine of hardcore Star Wars fans. My hope is this isn’t the last we see of Bo-Katan and her followers and while the prospect of Ahsako Tano on the horizon, you can feel that the pieces of season 2’s puzzle are starting to come together.

As always, there are a lot of fun throwbacks and references in this episode, an episode I really enjoyed. People tend to use the term “filler episode” for this type of episode, but I think it did more than that as it advanced the story, introduced us to one classic Star Wars character (Bo-Katan Kryze) send us to find another (Ahsoka Tano), as well as provided more context for the Darksaber and what it means to Mandalorians. No, overall I really enjoyed this episode as it had enough action to satisfy that part of my soul, but also provided fun information that could come into play in the future. Well done, all.