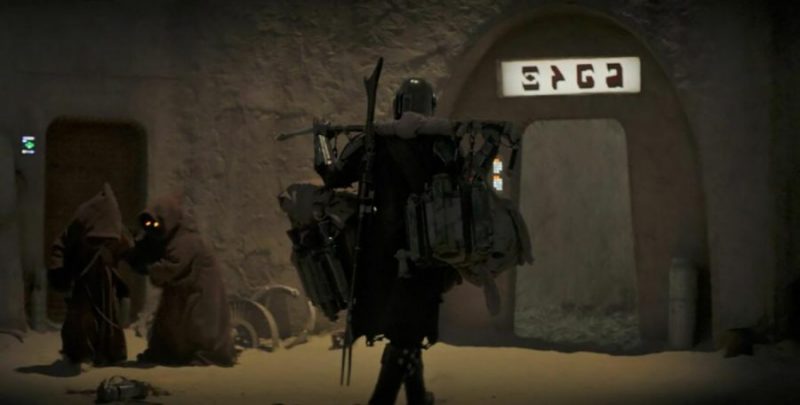 When you take on a passenger, you just never know the level of adventure that will come with them. Din Djarin found that in Episode 202 of The Mandalorian. Titled, “The Passenger,” this little romp of an icy adventure proved to be more of a fight for survival than we probably originally suspected. But fight Mando had to and to say it was close would be an understatement – but survive Mando, The Child, and their passenger did, thanks to a little timely intervention and a nice call-back to the old days.

Yup, even though the search for The Child’s people is still a slow moving target, The Mandalorian offered up a little misadventure that began on Tatooine and ended on an ice planet filled with some very unpleasant creatures. It was fun and the kind of action-adventure fun that I like a lot.

Amy Sedaris was back as Peli Motto, roasting some Krayt dragon via the flames of a pod racer, and setting this fun filler episode on its course. She knows someone who knows where there are more Mandalorians and will impart that knowledge to Mando for passage to a distant world. Sedaris fills up her limited time on screen with a rapid-fire brand of advice, silliness and joy in a character that must be a blast to play. It’s fun and she always moves the plot along, though her honesty has some slippery sides. But it’s never malicious, and usually helpful.

The “passenger” is a creature that’s the last of her kind. She’s taking her brood to meet her husband who went on ahead to carve out a refuge for them to raise their offspring. She has her eggs in a watery container and once we see The Child take a long look at the eggs, you know where things will be headed. The job would seem to be an easy one on the surface – simply transport this female to her husband, get the information, and head off to find fellow Mandalorians. Fortunately, it’s not that simple. And that’s where the fun surfaces.

The trip is a mix of calm expectancy and the humor of watching The Child figure out how to open the chamber with the eggs and start digesting them. It’s clear that our ‘baby Yoda” has a rambunctious streak and a hunger that makes it less than wise at times. In this episode, our green sprite not only stays on the prowl to digest the eggs, but also calls down a horde of ice spiders on our gang later in the episode. Bad, Baby Yoda…bad!!!

Despite the danger later on, this episode offers up plenty of fun moments, from those that are obvious to those that are simply relayed via body language. Since Djarin can’t understand his passenger’s language, there’s a nice amount of levity going on as he essentially talks to himself when addressing her. Fortunately, his passenger has some interesting skills and is able to rig a communications device through a droid, so that’s enough to give us her basic story and her desire for her hatchlings in the future. It gives the story a little more weight, this little arc where she explains her hopes and dreams.

On the way, though, because Mando can’t fly fast do to the sensitivity of the eggs, he runs into a pair of X-wing fighters representing the New Republic. In a fun little twist, the pilots of the X-wings are Dave Filoni (Mandalorian executive producer) and actor Paul Sung-Hyan Lee (Kim’s Convenience), some nice casting that was fun to see. They check out Mando’s ship, find him lacking some stuff (fun to see Mando make sad excuses), and the chase it on.

It’s this chase that leads Mando to a crash landing on the ice, falling through the ice and then watching his passenger discover some warm springs to bath in and give her eggs a little relaxation (Baby Yoda, of course was still on the hunt for a tasting). 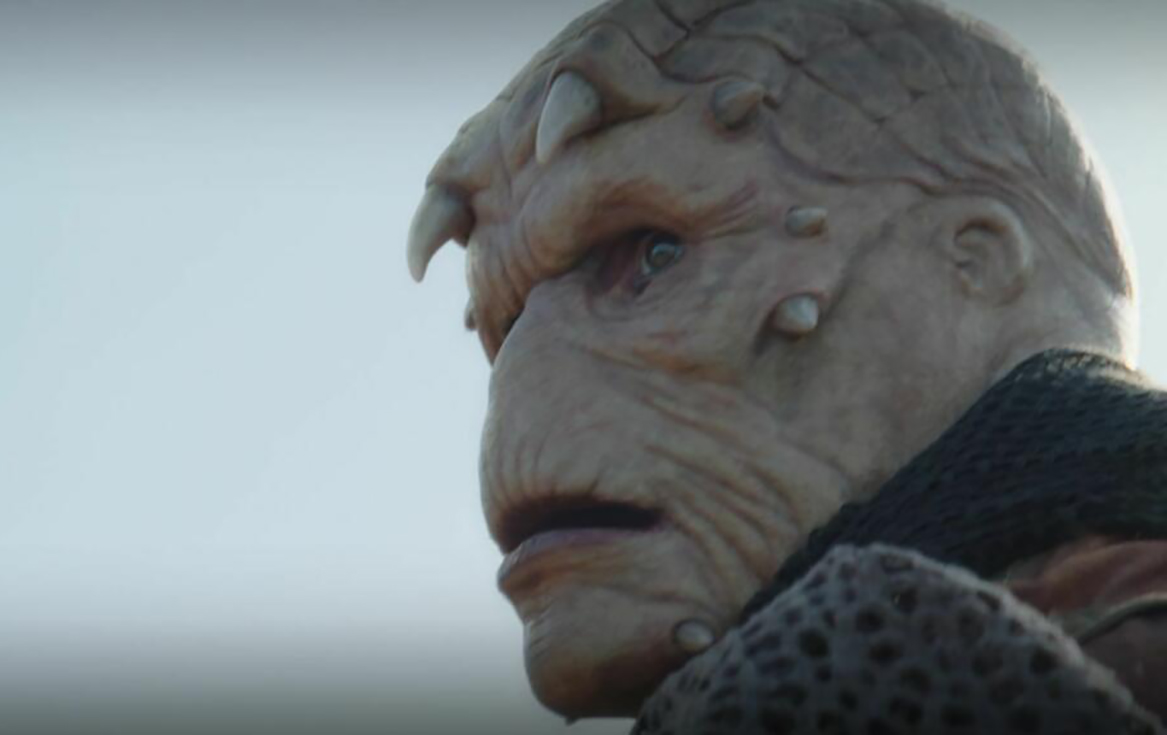 Well, again, The Child’s curiosity gets the best of it and the little guy wanders off to check out some formations nearby, which turn out to be a spawning ground for these ice spiders, which take exception to the visitors in their cave. When mom spider joins the fray, the race is on to get back to the ship. Mando’s shooting and blowing things up as they race back, but the spiders get in and everyone is holed up in the cockpit as the ship is overrun by these creatures, including momma.

It looks bad, really bad, until some unlikely help shows up in the form of our two X-wing pilots that Mando had thought he’d shaken. They blast away, killing most of the intruders. While they have cause to arrest Mando, they also have reason to let him be and they choose that trail to follow. And with that, our hero and his rag-tag group are safe and able to continue on their mission, though the Razorcrest is damaged. 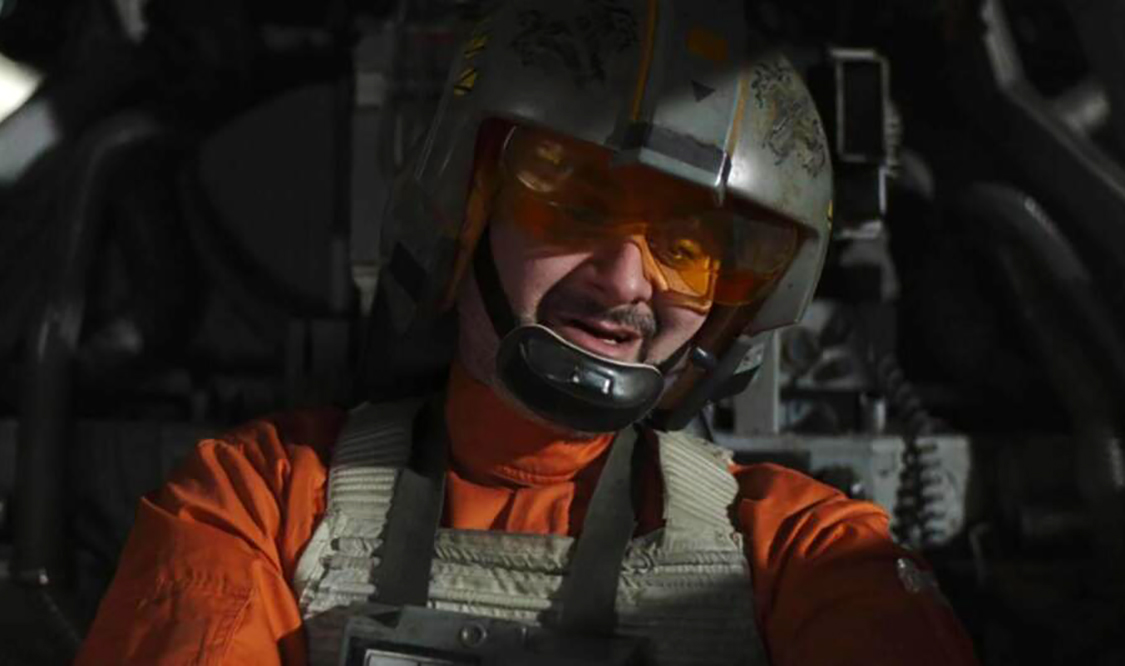 Episode 202 of The Mandalorian, “The Passenger”

All is well as they rest in the cockpit. The Child, sitting on Mando’s lap, turns slowly to catch a glimpse of the passenger, then turns back around and slips one last egg down the throat. It’s a fun moment and kind of highlights the vibe of this episode. Again, there’s a bit of a filler feel to it, but you don’t mind because it’s got nice snippets of humor and the kind of running fight scene that people enjoy.

At some point, the quest for The Child’s people will get rolling in earnest, but for now we’re having some fun just getting the pieces in place and delivering some fun episodes and plenty of enjoyable call-backs to past movies and other Star Wars material. I have no problem with that and while I’m anxious for the story to get revved up a bit, and to meet some old characters and the newbies that we know are coming, I’m content to just simply revel in this slow walk through Mando’s world.

We had a mugging attempt that went awry on Tatooine, some new characters to enjoy, the visit to the famous cantina where Greedo shot first, and other moments that offered some comfort and reflection. I enjoyed this episode a ton. The visual elements are a delight to behold, the make-up and prosthetics on the various species are on-point and there a joy to the whole project that seems to come through very clearly.