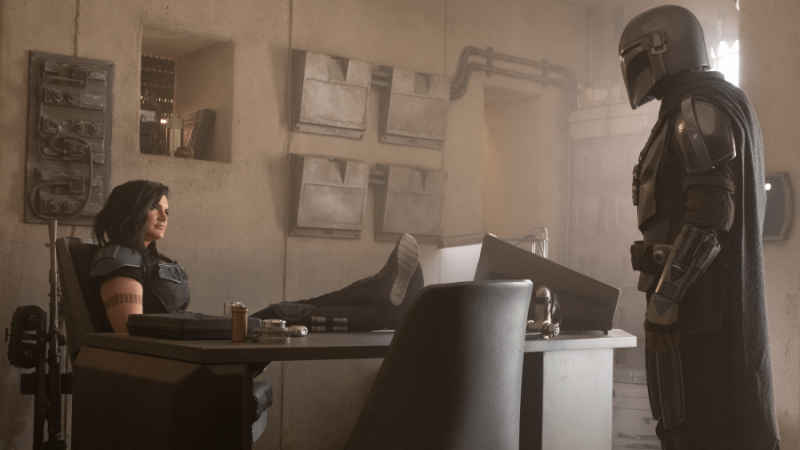 The Mandalorian: Moff Gideon Makes His Move In ‘The Tragedy’ – Review, Ep. 204

He waited, he waited….and then he pounced in the Chapter 14 episode of The Mandalorian – “The Tragedy.” In the end, Din Djarin did everything right, except hold onto The Child – and that should start a lot of interesting responses, and retribution, rolling forward. Can’t wait for it. Mando got Grogun to the planet Tython, found the old temple and the seeing stone, then stood back as Grogu connected with the force – then all hell broke loose.

In an episode that began with such optimism and possibilities, the 14th chapter of The Mandalorian saga not only went sideways, it went completely off the rails. And who should be there to oversee it all? Moff Gideon himself. That’s right, the black-clad Gideon, who had confidently awaited his opportunity, found it on Tython and not only made off with Grogu for his own twisted scientific purposes, but got personal when he blew up the Razor Crest along the way. Man, those are two things that I suspect are going to leave Mando more than a little peeved.

So, what was originally a quest to return Grogu to his kind, or find a Jedi that would train him, has now morphed into a hunt – for Grogu and, of course, Gideon. For this being one of the shortest episodes of season 2, “The Tragedy” certainly packed something of a punch, didn’t it? There’s a part of me that awaits in delicious anticipation of what Mando may unleash once he finds his charge.

Look, one of the things that’s becoming obvious in The Mandalorian, is this strange sense of family. Mando, the ultimate lone wolf, the “High Plains Drifter” of this Star Wars world, has, despite his best efforts, become enamored of young Grogu. Their scene in the ship when he has Grogu test his powers, is one of father and son interplay, with Mando demonstrating pride and paternal feelings for his green companion. Conversely, Grogu is visibly saddened when he thinks Mando was upset with him.

So often, in these fantasy-adventure or sci-fi shows, the concept of family is central to what and where the stories are. Often, it’s not the family you were born into, but the family you find, develop or even stumble into that sustains our heroes. In The Mandalorian, we see the seeds of that between Mando and Grogu, but would also be remiss not to throw Cara Dune and Greef Carga into that. The skeleton of “family” is forming between Mando and some interesting characters and the interplay between him and Grogu is a great example of that. Sure, baby steps, but you can see it developing.

That’s why the events of “The Tragedy” were so….well, tragic. However, in the aftermath of the smoke, destruction and dead bodies of Imperial troops, something interesting is taking shape. Boba Fett had tracked mando to Tython to get this father’s armor back, With him, in a shocking development, was Fennec Shaad, who last we’d seen was apparently dead upon the sands of Tatooine. Nope, Boba did some interesting repair work on her and she now serves him.

That’s certainly an interesting development and when the Imperial troops from Gideon’s Imperial cruiser start showing up, She and Fett do their level best to lay waste to their foes – even as Mando realizes a little too late that the goal of all this cacophony is to keep him busy while a quartet of “dark troops” descend and snatch up Grogu form the stone. It’s a tough moment emotionally, You can feel the pain that Mando has roiling up inside him as he wasn’t able to protect Grogu. In the end, the mission to keep him out of the hands of Gideon had failed. That’s not going to sit well with our Mandalorian.

I love the strange and interesting ways that honor and commitment are often kept – and from surprising people. Fett had told Mando that in exchange for the armor, he too would help protect the child. And with Shaad serving him, she is part of that bargain, too. It’s an interesting development and one that should be really interesting to watch play out in the next few episodes. So, though Gideon blasted Mando’s ship into dust (well, not all of it, right? That little nob that Grogu loves to play with survives and as Mando tucks it into his pocket, you feel the rage swelling), he leaves Tython with a couple allies.

Will they be the only ones? He enlists the help of Cara Dune, who has taken the job of New Republic marshal. He wants her to bust out a guy that will help track Gideon, but she notes that the stripes on the badge mean she’s got limits to what she’ll do. Again, a code of honor that kind of surprises – but then again really doesn’t. However, when informed that Gideon has “the kid,” we see a change in her countenance. I suspect she not only will release the guy Mando wants, but may join the hunt as well. And can Bo-Katan be far behind? Moff Gideon once again displays the Dark Saber, something Bo-Katan needs to rule Mandalore. I suspect we have not seen the last of her and her comrades.

Feels like there are a lot of loose threads that are starting to be knit together as we enter the season’s homestretch.

It really is interesting to me the way the Empire still operates so boldly and openly in the outer rim territories of the galaxy. They seem quite comfortable in their new reality, but like all despotic governments, even when they are thrown down they continue to push on as though what they had lost will be found again. And, in some ways, that’s exactly what will happen in this timeline. Gideon is kind of the poster child for this mentality as he strides the corridors of his ship confidently, often wears a slight smirk of satisfaction on his face as his plans move along, and demonstrates a cool and collected demeanor virtually all the time. HIs interaction with Grogu was both semi-threatening and somewhat funny. He’s at ease with being who he is and fighting for what he believes in.

So now the chase is on. Mando and whatever allies he’s able to gather to him will now hunt Gideon and try to prevent the experimentation of Grogu’s midichlorians from leading to something tragic – and potentially evil. I am looking forward to the face-off with Gideon, no matter who may get that honor. I will say that once again it’s a reminder that all’s right with the world that in this episode the Imperial Stormtroopers, like their predecessors, can’t shoot to save their lives. Conversely, Fett and Shaad are formidable and deadly in a very direct and precise way. That was a fun firefight our heroes were engaged in.

Season 2 of The Mandalorian has been good fun and I look forward to the run to the season’s conclusion. There’s plenty to clear up and still enough that’s shrouded in mystery to keep me very interested in “what’s next.”