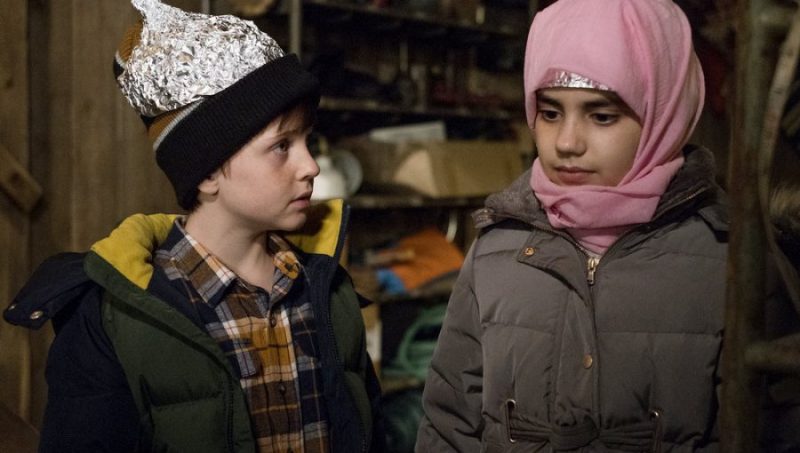 Well, I didn’t see that coming, did you? The final moments of episode 104 of “Resident Alien” were right out of the “that’s a twist” playbook. I suppose, upon further reflection, we knew so little about Harry Vanderspiegle that the thought he was married really didn’t pass into our consciousness much.

And that little nugget is just one of a herd of things that went on in episode 4 as Resident Alien really kind of turned up the gas here. And there was so much to wade through – The secret of Asta’s daughter, Jay; Harry’s homesickness and ability to suddenly dream, Max and his new partner Salah running a game and then getting caught, Sheriff Mike Thompson’s blustery bullshit, Deputy Liv Baker’s dissatisfaction, D’Arcy’s struggle after Olympic dreams were dashed – and on and on.

Yeah, this episode of Resident Alien was jam-packed with strange little tributaries running from the stream called Patience, Colorado. And it was a load of fun to get hold of. I thoroughly enjoyed this episode and found that the comedy/storytelling/backstory kind of rhythm this show has is very entertaining. And it makes me hang onto the show as the prospect of something out of left field dropping into the action seems to be just a moment away. I find myself hooked on that a bit. 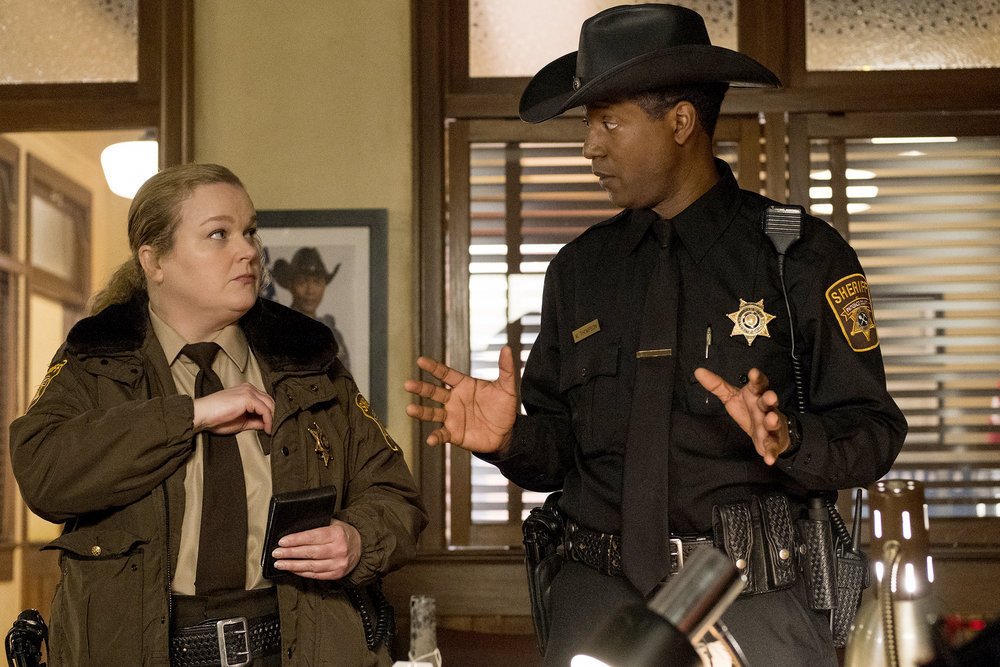 But let’s jump in where the last episode kind of ended and I didn’t give it much mention. But it would appear that Alien Harry’s arrival is not as big a secret as he may think. A pair of operatives, under the guidance of “The General” are tracking Harry. This man and woman duo would seem to have specific duties – the woman has already killed a guy with a throat punch and cracking of the neck, while our male operative would seem to be more of the scientific type.

But make no mistake, they want to find Harry and take him to “The General” and as our lovely killer notes, she’s going to make sure nothing stands in her way – not even her companion. She seems, in a word, lethal.

The funny part here is that later in the show, the hunters and the hunted cross paths at an out-of-the-way gas station. Harry and the male part of our team (Nicely decked out in an average looking RV), step up to the urinals at the same time. It’s a magic moment where Harry gives some awkwardness to a situation that males often find awkward as well.

When Harry asks his urinal mate if he shivers sometimes when he pees, I just about spit out my drink. Yeah, it’s weird, but it’s not that weird given Harry’s propensity for blurting out uncomfortable truths at inopportune moments. In short, he often says what people are thinking, but in their rush to be safe, they don’t say them. Harry, despite his increasing human feelings, delivers those moments with plenty of panache.

And with that they part, because Harry has a much bigger role to play in the blurt it out department. Asta and Dan Twelvetrees shangai Harry into a trip to the reservation to give “grandma” a shot for her back pain. It’s here that Harry, in his continuing development to understand humans, gets a nice little look into family and why it matters to humans. Of course, that moment is shattered as Harry administers the shot to Grandma when he states something that seems pretty obvious – Jay is Asta’s daughter. The facial bone structure alone is conclusive, according to Harry. Well, clearly, this sets in motion a lot of things. 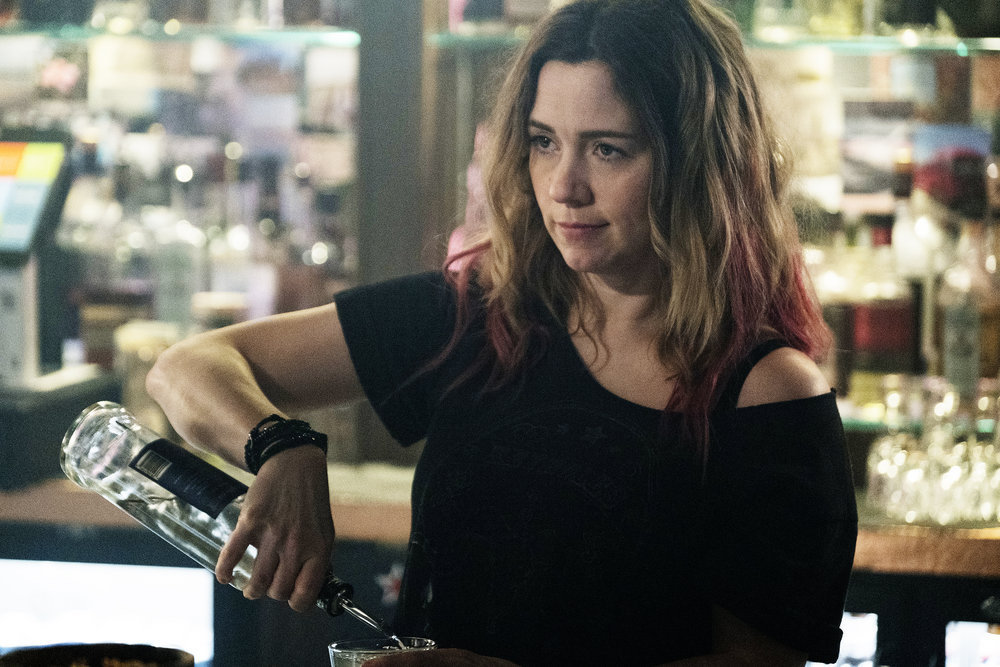 In the end, though, the concept of family and trust is reinforced as Asta admits to her “father” that he was already raising one daughter that wasn’t his, she didn’t think it fair he would have to raise another. It is a painful moment, a killer of an emotional moment and one done so well by Sara Tomko and Gary Farmer. In the midst of this comedy, this moment, this poignant and painful moment, it produces a level of love and trust that Asta, at 16 years of age, simply didn’t have the maturity to grasp back then. It’s well done and sends yet another message about family and acceptance.

As much as I like the Max vs. Harry vibe, this new girl, Sahar, offers an interesting dynamic. It appears that Max’s moments of kindness when she was being bullied have solidified a growing friendship, one that takes them to a plot of steal Harry’s cabin key and investigate for themselves what’s going on. And the visit is a revelation for the kids as they spot the floating apple, the pieces of Harry’s ship he’s found, a map and, in the end, trouble. Gracelyn Awad Rinke really delivers a nice touch with Sahad.

She’s smart, she’s daring, she’s got a Hermione kind of spirit to her and had slid neatly into Max’s worldview that Harry is an alien. There’s a great moment when the kids are in Harry’s cabin and Max offers her a tin foil shield to go over her head, but she pulls back her hijab to reveal she already has one on. Talk about nerdy delight and two people made for each other. It says so much about her and how she and Max are a perfect tandem to terrorize Harry.

Unfortunately, the kids touch something they shouldn’t have and Harry later finds them unconscious, but alive. So, naturally he throws them into zipper gunny sacks and, ostensibly, plans to dispose of them when, who should walk into his cabin but his wife. Now, this should be fun. Harry will now try to fool the woman who probably knows him better than anyone else. I mean, what could go wrong, right. Oh, and about those two lumpy bags Harry dropped on the floor – that should require some fun dancing around the truth. So now we’ve got Max and Sahar vs. Harry vs. The Wife. Feels delicious. 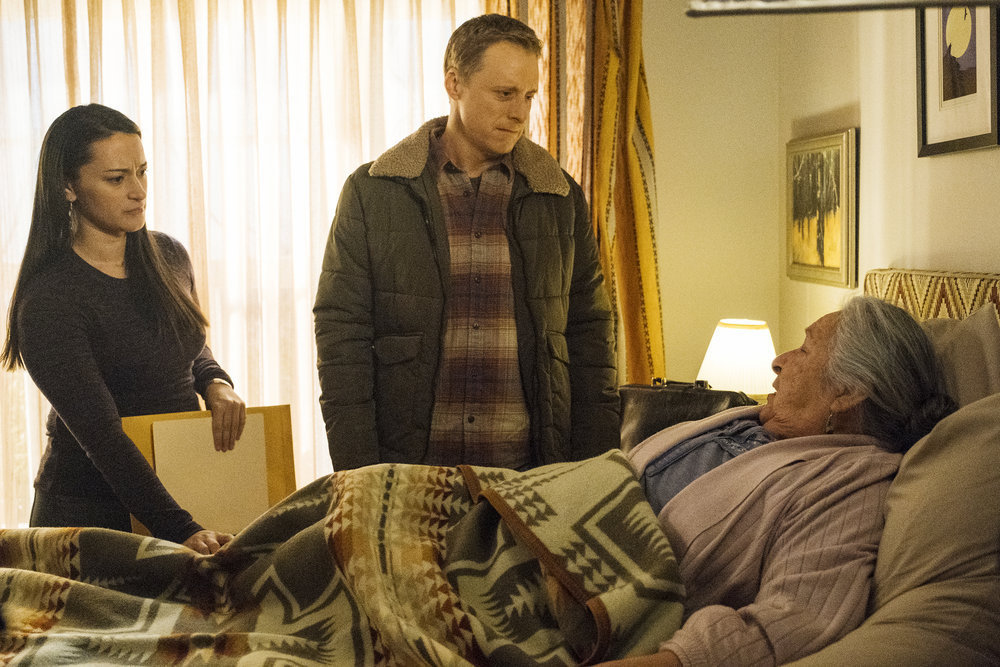 One of the things I’m really enjoying about Resident Alien is that the periphery characters are getting their time as well. Deputy Liv Baker (Played with the perfect amount of frustration by Elizabeth Bowen) is frustrated that the sheriff is belittling and a very poor listener, preferring to hear his own voice even when it’s ridiculous. His explanation of how a piece of door and doorknob could get in the lake, or the need to buy a Hot Wheels car to save a kid’s life are priceless examples of him wandering aimlessly down a road of logic he really doesn’t have directions to.

Baker is a quick-thinking, logical sort who is able to spot important moments when they arrive, but is often left empty-handed by a sheriff in love with his own voice. The scene where she joins D’Arcy at the bar for a little lady lamentation is a good one and gives us a little insight into both.

D’Arcy shattered her leg in the Olympics and returned to Patience, Colorado feeling very unfulfilled and, we learn, feeling as though she let the town down. Kind of gives us a little better understanding of who she is and why there’s pain there that is quite obvious, even though it’s fun. For Deputy Baker, the issue is the opposite, noting she was sitting in the same spot when D’Arcy was at the Olympics. For her, the lack of recognition and support from the sheriff make it feel she’s made no progress in her life. The two do some nice maintenance on each other’s psyche and there’s that feeling that Patience, being a small community, has a lot of ties that bind – and some are painful or sad. 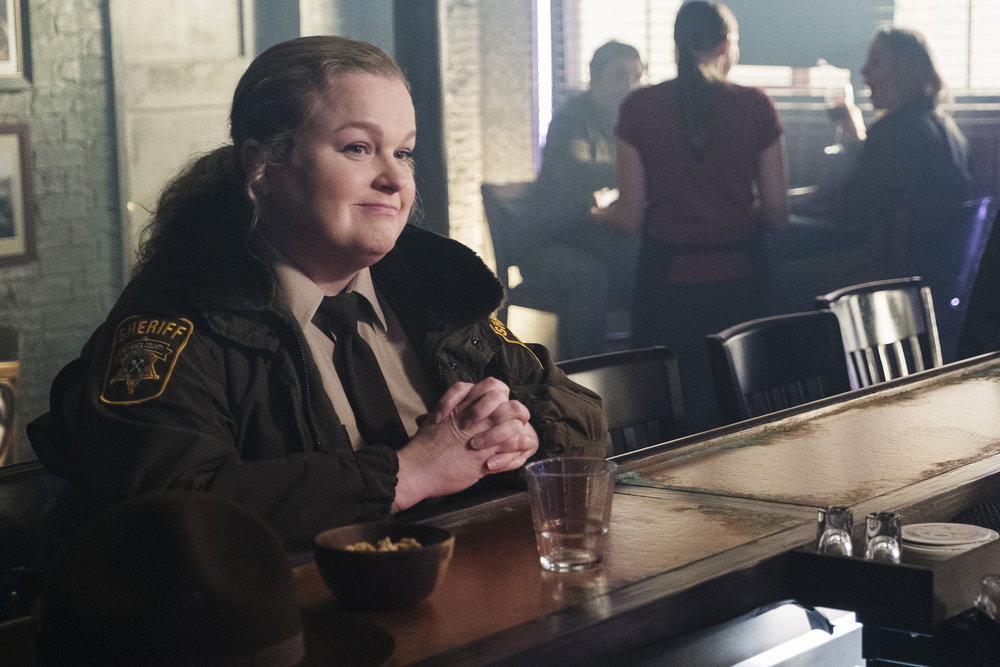 There’s a great little arc in this episode where the mayor, Ben Hawthorne, invites Harry over for dinner to help smooth over the fear that Max has about him. Somehow D’Arcy jumps in as a plus-one and the evening is one of strange moments. While Max and Sahar are implementing their plan (Why are you being so nice to me, Harry asks a suddenly calm Max), D’Arcy is killing off bottles of wine and dropping some secrets about Ben – he was her first kiss in grade school…and taught him a thing or three when they were together as sophomores. Ben’s wife Kate isn’t delighted with the revelations and the evening, which sees Max try to stall for time, is quite interesting.

It’s also after this that D’Arcy asks if Harry will kiss her goodnight, leaving Harry aghast as he wonders if his penis is dying because it’s becoming petrified. So, in the course of the evening, D’Arcy made quite the impact.

Here’s the deal, I think Resident Alien has started to find a nice groove and I really enjoyed this episode’s many little storylines. It made me laugh out loud numerous times and certainly offers, in the midst of the comedy, some things to think about in terms of humanity, love, family, trust, and the shrewdness of kids. And all together, I think that’s a pretty entertaining hour.