General consensus seems to be that Men In Kilts, the new Scotland travel show starring Outlander’s Sam Heughan and Graham McTavish, is definitely a hit! But there were a couple of issues people mentioned after the first episode – not enough kilts, and not long enough! The second and third episodes, which focus on sports (Episode 2), and music and dance (Episode 3), definitely fix one of those problems – more kilts – but sadly, can’t fix the other – it’s still half an hour.

This General Note is something I’ve seen asked in several groups. Why, people are asking, does the show not more closely resemble Clanlands, the very popular book that Sam and Graham wrote and published last year? The secret is that Clanlands really only covers, by my estimate, about half of what actually ends up on screen. When Starz purchased Men In Kilts a year ago, additional filming was ordered – no info on why, or exactly what they added and subtracted. But there are a couple of clues. I have a PDF of the book, sent to me for preview last year, and a search by keyword has turned up very few of the names and places we’ve seen so far – Episode 3’s Gillebride Macmillan is in there, and I believe that’s one of the original filming scenes; but the Glencorse pipe band is not. Neither are Tony Singh or Tom Kitchin from Episode 1. I wonder, will we see Duncan Lacroix show up?

Filming last summer in Scotland, I’m sure, posed quite a few problems – as the country, like the rest of the world, was in lockdown due to Covid. It’s been a little surreal to see our Dynamic Duo in spots where you would expect lots of people, especially in the spring and summer, and see empty streets and stadiums.

When you film new material, it invariably means that much of what was originally filmed won’t make it into the final product. An example is from the Inverness Outlanders group. In a new blog entry, Julie Mutch writes about her experience of the group meeting up with Sam and Graham and the film crew, and being asked to play a game of shinty for the show. A photo of this was even included in the recent special magazine, The Complete Guide to Outlander (p. 74). But the segment didn’t get into the final episode – in fact, shinty was only mentioned through an Outlander show clip. To read the full (very interesting!) blog post, go here. 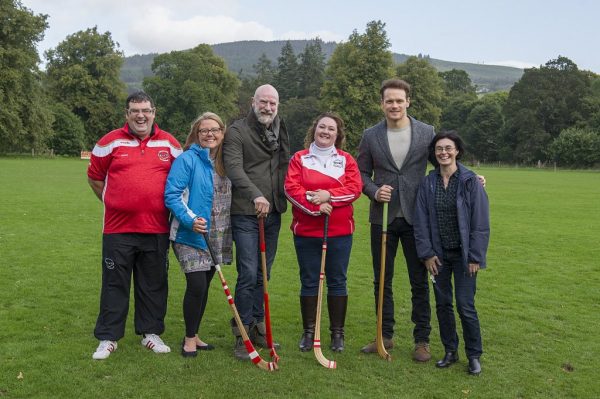 It would be terrific if, at some point, we get to see this extra footage, either as an addition to the eventual Blu Ray release, or as a head start to any future seasons!

A contest between Sam and Graham to see who is the most sporty kept me laughing throughout the episode. One of the comments about last week was that it didn’t seem as lighthearted as Clanlands, but I thought the episode was a lot of fun. My favorite moment was when Graham snuck back and knocked over the rock that Sam had lifted! That was very much in keeping with the friendly rivalry the two have had – and since Graham made barely an attempt to lift the (dirty, muddy) boulder, of course he couldn’t stand to have Sam best him on this one! 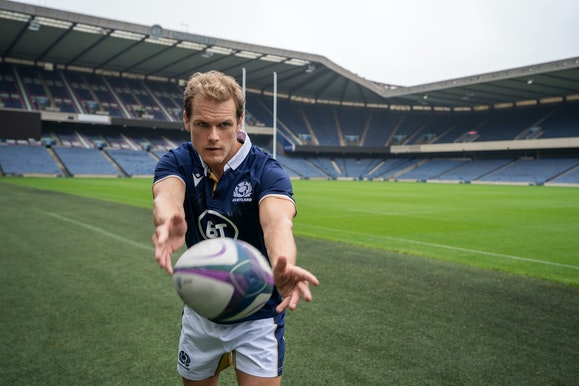 The outcome of the bet – with Graham winning – surprised me! Did anyone else see that coming? A longer drive, farther throws – somehow, my image of Sam as the king of sporty has been shaken! But it was all a lot of fun to watch, and of course, the penalty that Sam had to do – which, of course, was his own idea – was hysterical. This whole show, though, reinforces my belief that both of these guys are terrific personalities, fun, friendly, and not afraid to show their goofy sides. 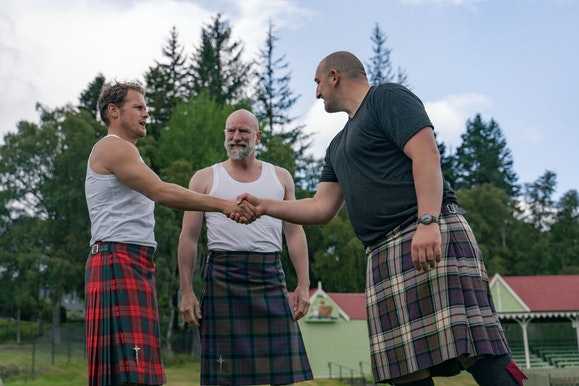 I enjoy seeing the little outtakes during the beginning of the show’s credits – I was wondering if we’d get the caber toss in there anywhere!

But No Rhythm Detected – Episode 3

While I really enjoyed the first two episodes, I have to say I was left slightly cool to this one. Why? It felt much more structured and scripted, poorly edited, spent too much time on things that could have been a little shorter. An example – at the beginning of the episode, Sam narrated a little intro to the history of the bagpipes – and the next segment had nothing to do with the pipes. Instead, we met guest Gillebride Macmillan, and I would have loved to have seen a little more from him. What was the song they sang? Sam asked for a song for an occasion – what was the occasion, what was the song about? As we saw in Outlander, Gillebride’s voice is lovely and lilting, but the segment was poorly introduced and much too short. 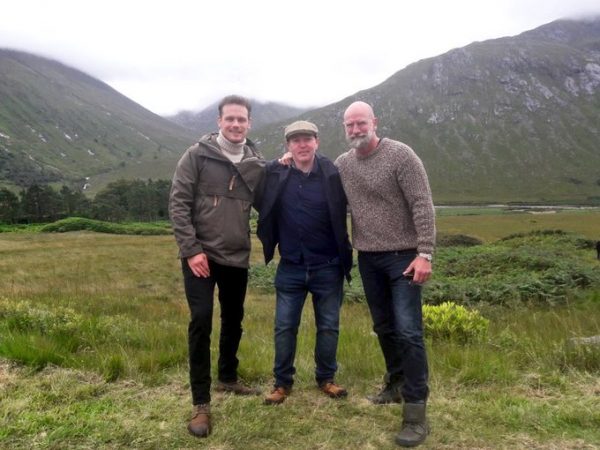 And THEN we get the bagpipes!  It was fun to meet Iain McGillivray, who is the country’s youngest clan chief, at Doune Castle (Leoch). It was interesting to find out that he and Graham are distant cousins! 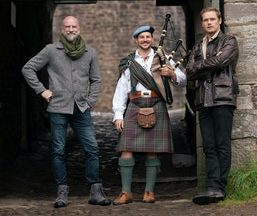 The segment on Dance showed that neither Sam or Graham has any natural talent for this art, sorry to say – but that made it even more fun. I really admire their willingness to try things that don’t come naturally (who knows how well they could have done given time….). They’re very good natured about all of it! Champion Highland Dancer Cerys Jones made up for both of them, however. 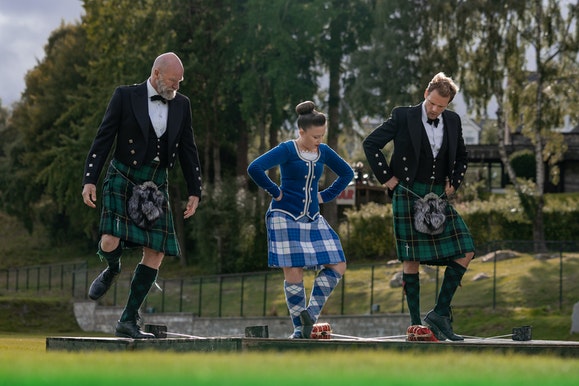 There was a big surprise at the beginning of this segment – a short video clip from a con showing Graham’s wild, sporran-slinging attempt at dancing looked VERY familiar, and if you’re in some of the Outlander Facebook groups, I don’t doubt you’ve seen this before. It was taken at Jibland, an Outlander con in Rome several years ago by my close friend (and Outlander Gab radio show co-host) Samantha Kraupner. Exciting, you would think, to have your video used? Well, as it turns out, no – Starz did not request permission to use the clip, and gave no credit to her or the event (whose rules say that you may take video but may not use it for commercial purposes). Samantha has attempted to contact Starz to request an acknowledgement that they used her video without credit or permission. Hopefully, we’ll have an update tomorrow on the Gab, but so far, no word from the network or the show.

The Glencorse Pipe Band, led by Tam Crawford and Pete Case, was terrific, but does anybody know where they were playing? Anyone recognize the location?

West Coast, your marching orders are to join me for another episode of #MenInKilts starting right now on @STARZ or the App. https://t.co/SenwvjodZR pic.twitter.com/BnD9pm8vfM

The Ceilidh was a near-miss. It ran too long – how many times can you see them do the same thing? Although I did enjoy watching the fiddler, and our guys looked great in their formal wear. Graham has no rhythm, but he was still fun to watch, and Sam definitely cut a dashing figure.

I’m really looking forward to next week’s episode, focusing on Witchcraft and Superstition, judging by the preview! The official synopsis: Deep belief and reverence for the supernatural characterize the culture of the Scottish Highlands. Sam and Graham take a deep dive into the into the old superstitions, witch trials, and their imprint on the country. Plus, Sam spends the episode trying to scare Graham at every turn. I’d like to see the show be a little looser, less scripted and formal – less Rick Steves and more Bill and Ted. What do you think about Men In Kilts so far? I’d love to hear your opinion!

Tuesday nights – listen to the Outlander Gab – Men In Kilts Edition radio show! 9 pm eastern/8 central/6 Pacific! Call in and chat with us about either show, or anything else. Click here to listen to all past episodes.

Join us on Facebook to chat about Outlander and Men In Kilts!