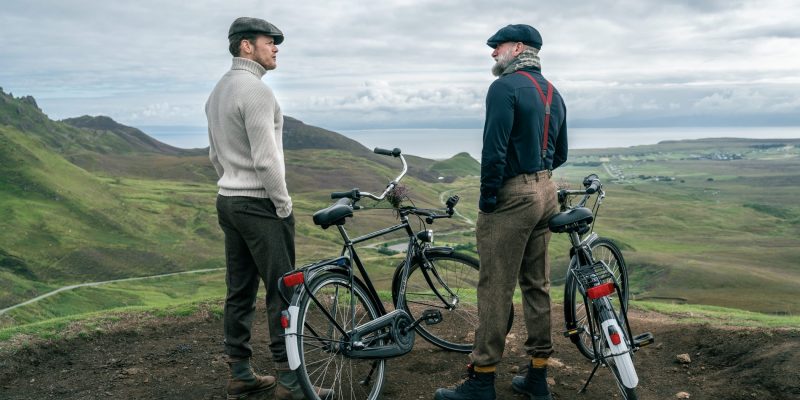 Tonight’s episode of Men In Kilts took us sightseeing – by bike, boat and plane, and of course, the ever present camper van. But truly, half an hour is not long enough to even scratch the surface of the beauties of Scotland – and I’m sure Sam and Graham would agree. Almost more than any other episode so far, I felt like this one tried to tackle way too much, and ended up with too little.

Don’t get me wrong – I enjoy whatever I can get. And there were a number of fun moments – I feel really sorry in a completely relatable way for Graham – but that’s what they were, moments that were too often unsustained, leaving us yearning for LOTS more! Discussions of some of the incredibly gorgeous places were mere touches, and even the longer scenes just weren’t enough.

The story of the “hag,” the Cailleach, creating Scotland was really interesting! This story isn’t only a Scottish tale – versions of it appear in British, Irish, and other traditions. I learned a lot about it here – and I’m sure there are many fascinating Scottish myths on this website. The article says, “Her true origins have been lost over time. She is vastly ancient and predates even the Celtic mythology of which she has become a part. One Highland folk tale states that she existed ‘from the long eternity of the world’.” 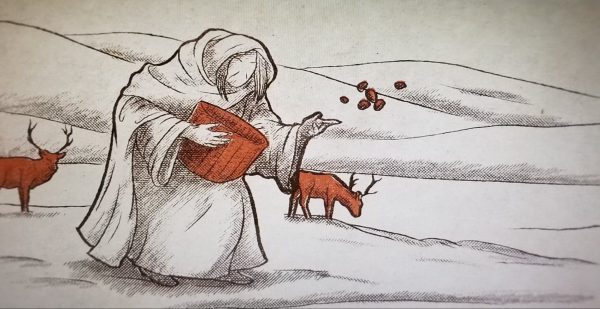 A special guest joined our two intrepid adventurers today! Gary Lewis, Outlander’s Colum McKenzie – and a terrific storyteller in his own right – met the guys at the famous Loch Ness. Gary is, in real life, a delight – a great hugger (as detailed by Graham on p. 195 of Clanlands), fascinated by history, and an all around lovely person. This clip was one of the few we see in the series that was actually filmed in the first go-round – it’s detailed in Clanlands. There was so much more that could have been said about Loch Ness and its famous resident, whether it’s a kelpie, a plesiosaur, or something completely unknown (if it even exists!).

Michelle and I had persuaded an unsuspecting fisherman to hand over his livelihood for the day and we decided the least responsible of us would be Gary, so therefore the most fun if he arrived by water. A couple of years earlier I’d helped him get a short film crowd-funded, where he played a Lewis fisherman. He jumped in and instantly looked the part, complete with woolen bonnet and plastic fish.

Graham and I continue standing on the harbour waiting for a lift. Our terrific photographer says this would be a great time for a shoot. A couple of large rocks situated next to the shore are an ideal setting. We make our way down and I jump up onto a rock and start to pose.Graham remains firmly on shore. ‘Come on!’ I shout. Gary is gathering speed, he’ll be with us in minutes. ‘Nope, not doing it,’ says the landlubber. ‘Too dangerous.’ Graham crosses his arms. The photographer and I encourage him. ‘It’s only a rock!’ Begrudgingly, Graham gingerly puts one foot on the rock. Then, crab-like, he climbs up on all fours, as if it’s the side of a cliff. The stone couldn’t have been higher than a bench! – Sam Heughan, p. 197, Clanlands 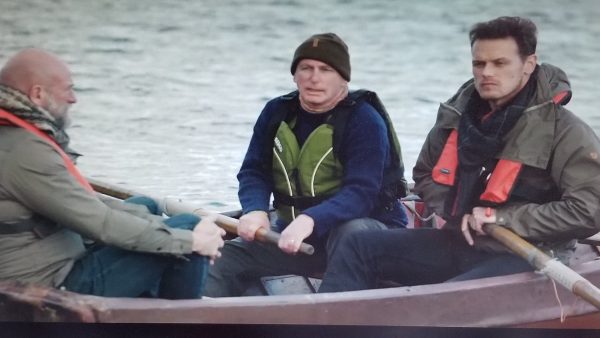 Wow! The midges really love Sam, don’t they? It’s funny to see this big strong guy frantically waving away these miniscule bugs, but it doesn’t matter HOW big or sexy you are, the midges just don’t care.

The jump in the freezing fairy pool is one scene where I would definitely have liked to know more – Skye is high on my list! Sam originally described it as a “spa” -he just keeps pushing Graham’s buttons. Tell us more about it! And where were the fairies? Of course, I won’t complain that we got to see our two guys having fun, but it definitely showed the difference between them – Sam is up for any adventure with a lack of fear and a lot of joy, and Graham will do what’s required, but is definitely happier in the more comfortable elements (I can totally identify more with Graham, personally). 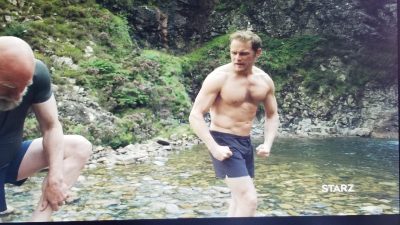 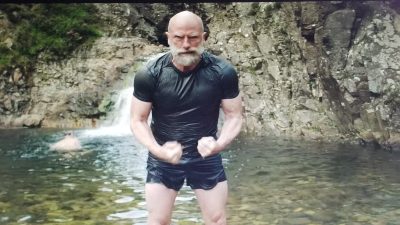 And, speaking of comfort zones, Kilt Rock! Oh my. I’m not particularly afraid of heights, but I have a great deal of sympathy for those that are – and I clenched my teeth the entire segment, watching the anxiety so plainly written on Graham’s face! Sam wasn’t joking (too much) when he said that the original title was “Ways of Winding Up Graham.” Boy, was he a good sport, doing it anyway! Sam was trying hard to be supportive, but it was funny seeing him not able to keep his mouth closed – and those of you with any kind of performance-based anxiety I’m sure could understand Graham’s need for Sam to JUST SHUT UP!! But oh… the view was spectacular. 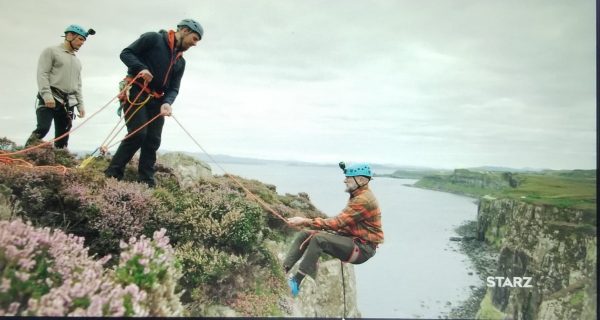 I love the little “extra” we always get over the ending credits – and the short discussion of Sam and Graham’s experiences with stage nudity and parent reactions was certainly fun. “No need for that, Graham, no need at all.”

Next week is clans and tartans – I know this will be a fun episode! And I’ll have a chance to talk with Prickly Thistle mill owner Clare about Scotland’s famous tartans! Keep an eye out for that.

One more thing – did you get a chance to see the Outlander Season 6 behind-the-scenes sneak peek that ran on the app or on Starz? Was that Major Donald McDonald, Adso’s foe? Cute shot of Young Ian and Malva! After so long without, even just a little peek was wonderful – but we need MORE!!! 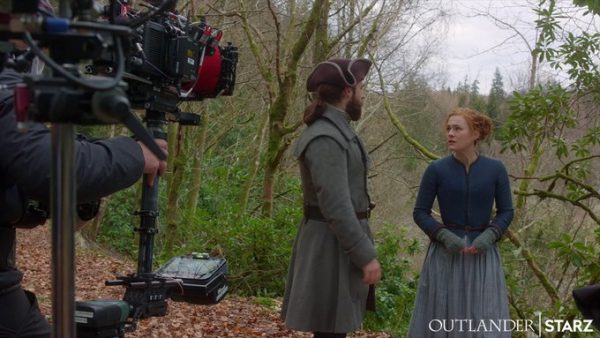 In 2015, I had the opportunity to talk to many of the Outlander stars at the Season 1, Part 2 New York City premiere event. Here’s a short clip with Graham and Gary – I asked them how being in Outlander affected their connection to their country. The first season of Outlander was actually filmed during the runup to the 2014 Scottish independence vote.

Chat about this week’s Men In Kilts, the Outlander sneak peek or anything else on Tuesday, 9 pm eastern/8 central/6 Pacific on The Outlander Gab on the Air – Men In Kilts Edition, our internet radio show! Go to blogtalkradio.com/threeifbyspace to listen, get the call in number, or load up any of the past episodes!