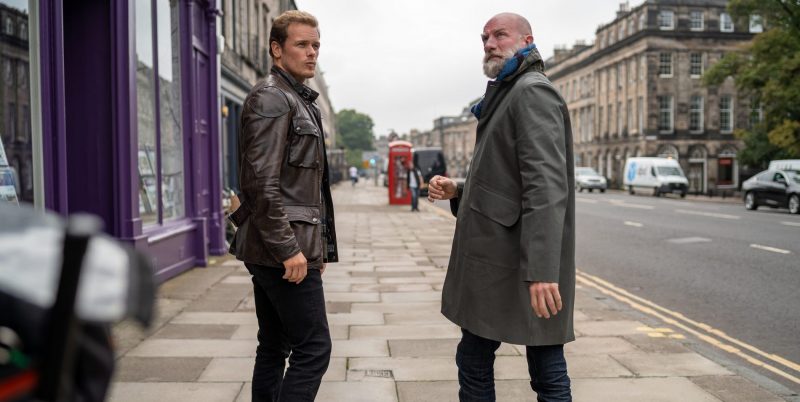 Men In Kilts: Struggling Just a Bit to Make It Up That Hill, Review: Episode 5

Episode 5 of Men In Kilts aired tonight! We’re in to the second half of the show’s first season – what do you think? Would you be interested in a season 2? As is, or with changes? It’s fun, it’s a diversion – but is it here to stay (that is, if Sam and Graham want it to)? Of course, we got the news today on something that IS here to stay – Outlander has been renewed for Season 7! We’ll talk about that in a minute.

The first, pre-credit scene in today’s episode, of Sam and Graham’s motorcycle/sidecar running out of gas, is unfortunately a bit of a physical demonstration of how the show seems to be seen in the eyes of many fans. After the funny and eventful Clanlands, Men In Kilts is feeling a bit scripted and sanitized. I can’t say at all that I mind the show, or that I’ll stop watching, but it doesn’t have the joy and spontaneity that we were led to expect it would have. No running into companions by chance, no Sam driving escapades – even the banter between S&G is cleaned up.

Nothing more traditional than a wee dram of whisky. Watch a new episode of #MenInKilts right now on @STARZ or on the App. https://t.co/4TfGYIFrXC pic.twitter.com/8tScGtjkQs

This episode, Culture and Tradition, has been the prettiest of the episodes so far – lots of transition scenes of gardens and thistles, closeups of colorful herbs. The lovely scenery seems to be a time-filler, though – the segments in this episode are VERY quick (15 minutes in, they’ve talked with three different guests), and it would have been interesting to linger a bit more in some areas. Surely there were more craftsmen in Edinburgh, more to learn about the history and use of herbs in Scotland, or – especially – the use and disuse of Gaelic.

And of course, Sam mentions his uncle, Trevor Leat, who created the stag and cross for Outlander – a little bit of actual basketmaking goes a long way, but the giant structures Mr. Leat has created might have been a great addition to the episode.

Come for the basket weaving, stay for the snacks. #MenInKilts pic.twitter.com/e0klBETaYa

I did get a good laugh at Sam frantically batting away the midges (as someone who is dearly beloved by mosquitos), Graham’s “midgy little minions.” And if they ran a contest to win the blue scarf that Graham wore in the sheepherding segment, I’d buy all the tickets. 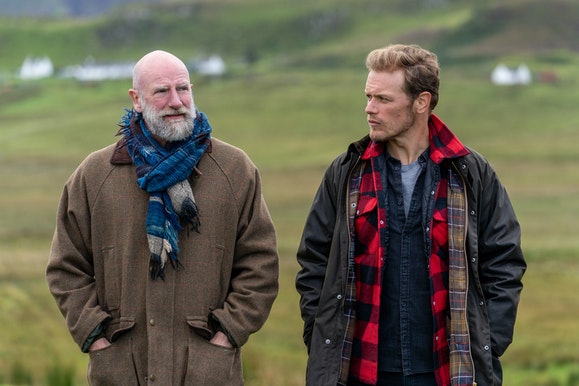 But I truly felt that segments that weren’t quite as interesting – for me, basketmaking and sheepherding – were given a bit too much time, and those that could have been developed into full half hour episodes on their own were quickly dispensed with. Definitely, though, Men In Kilts is fueling my absolute NEED to see this beautiful country! 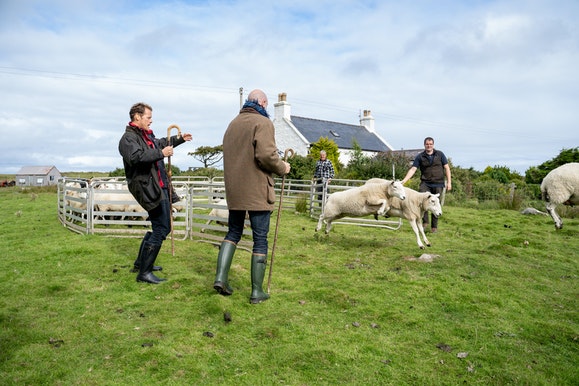 Next week, March 21, there is no new Men In Kilts episode, but come back here, and I’ll have a more extensive conversation with last week’s guests, Jamie Corstorphine and Charlotte Golledge (from the Greyfriars Kirkyard). Lots of stories from the Outlander set, poltergeists, and why Sam not being naked threw Charlotte off a bit. The last three episodes will include Scotland by air, land and sea; clans and tartans; and the final episode will focus on Culloden and its impact on the country and its people.

Starz announced today (like you haven’t heard, lol) that they’ve renewed Outlander for another season! I know we had all be hoping for a 7 and 8 announcement, but since they have hardly started on filming Season 6, I guess this isn’t a huge surprise. There had been some speculation, I heard, regarding the length of the initial contracts that Caitriona and Sam had signed, relating to a delayed announcement, but I don’t think that factors into it. With Season 6 likely to air this fall (purely my own speculation), that would mean we could have Season 7 about the same time in 2022!

What should we be looking forward to in Season 7? I’m trying to control myself from giving any spoilers for those who haven’t read the books – but we will see an adult William, and lots of the initial battles of the Revolutionary War. Of course, we don’t know how much of Book 7, Echo In The Bone, will be pulled into Season 6, and if a lack of an announcement about Season 8 at the same time means that 7 will bring us near to the end of the 8th book (definitely a possibility, since a good part of Season 5 was taken from book 6). Since book 9 isn’t out yet, it’s hard to speculate how far – and how quickly – the show will reach Diana’s planned end for the series, which she has said will include a tenth book.

I think it’s about time we answer some fan questions… #Outlander pic.twitter.com/6aNvNSkYlx

Join us to chat about  Men In Kilts and Outlander every Tuesday night (while MIK is showing) on internet radio! 9 pm eastern/8 central – click here to listen and get the call in number (and to listen to all previous episodes).

And check out our Facebook group, Outlandishly Three If By Space!