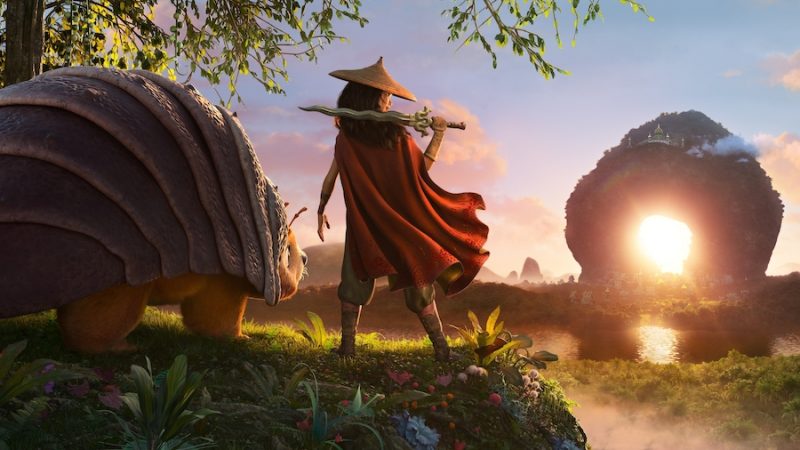 Review: ‘Raya and The Last Dragon’

The latest Disney animated feature film “Raya and the Last Dragon” hit select theatres on March 5th and Disney+ streaming service for those who paid for premiere access. As Disney and Hollywood start to finally bring us more diverse stories, the question becomes, do they do them justice?

“Raya and the Last Dragon” takes us on an exciting, epic journey to the fantasy world of Kumandra, where humans and dragons lived together long ago in harmony. But when an evil force threatened the land, the dragons sacrificed themselves to save humanity. Now, 500 years later, that same evil has returned and it’s up to a lone warrior, Raya, to track down the legendary last dragon to restore the fractured land and its divided people. However, along her journey, she’ll learn that it’ll take more than a dragon to save the world—it’s going to take trust and teamwork as well.

Disney animation never fails to amaze us and Raya is no exception to this rule. The rich world brings us bright and vibrant colors that tell a story in themselves. It may seem trivial but a great example of this is each of the 5 tribes: Fang, Heart, Spine, Talon, and Tail. Each of them had a distinctive color associated with them which in a way tied back to their core beliefs and traditions. The story behind the film is simple but fun for audiences of all ages. And that last point is important. The story appeals to a wide range of audience members, which in true Disney fashion, results in hidden humor gems.

So let’s talk about the voice cast. You may not have caught all of them but this film is jam-packed with some awesome talent: including Kelly Marie Tran as the voice of the intrepid warrior Raya; Awkwafina as the legendary dragon, Sisu; Gemma Chan as Raya’s nemesis, Namaari. Special shout out to Awkwafina who was perfect for the role of the dragon. The mix of caring, hyper-active and somewhat spacy Dragon Sisu was perfecting voiced by her.

We should not neglect to mention that we need this trend of more diverse stories to continue. Did Raya and The Last Dragon hit the mark 100%? No. But it pushes Hollywood forward and continues the conversation which is important. Hollywood isn’t the only place progress needs to be made, even in the world of anime and other animated content from overseas diverse stories are lacking. With that in mind, if you enjoy this type of mythos and storytelling check out “Big Fish and Begonia” (Chinese Folklore) or “Onyx Equinox” (Meso-American Mythology).

One area where the film perhaps sends the wrong message to a younger generation is the idea of “trust in everyone to work together”. It’s a wonderful idea for sure. And we all want that to be the truth. But blindly trusting without some level of justification for that trust sends a message of “trust strangers” which is a bit too far. Granted adult audiences catch the nuisance the story is trying to convey about earned trust and the consequences of our actions but parents will need to explain this to the younger audience members.

Another theme that is more subtle but just as important is actions speak louder than words. There is a point in the film where all of our characters have to finally ‘do’ in order to defeat the evil. There is a lot you can draw from that and perhaps that’s getting too far into the rabbit hole for this film but I still feel its worth mentioning.

Raya will enter as yet another Disney princess for a new generation of young women to look up to and inspire like those before her. Raya and The Last Dragon is a great addition to a much-needed and growing list of diverse stories that will hopefully stir interest in watching and learning more about these cultures. And it’s a feel-good family film that you can enjoy and escape into that doesn’t try to beat you over the head with real-world parallels.

You can catch Raya and The Last Dragon in select theatres nationwide or with Premiere access on Disney+.