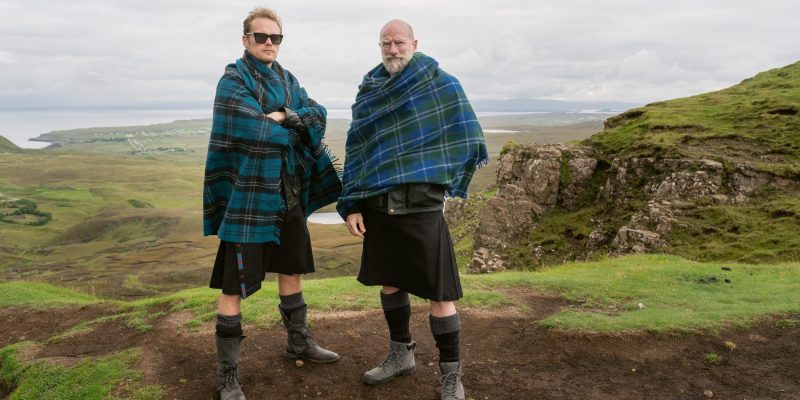 One more episode! This week’s episode, focusing on clans and tartans (although not much on the latter) was, as usual, quick paced, witty and informative – and somehow better put together than last week’s. Sam and Graham’s banter – on a ski lift (to where, though?) with Graham’s fear of heights on show again; in the van; and getting into a seaplane – was more natural and more fun than it’s been in a few episodes.

I really enjoyed all the personal and historic stories in this episodes! The MacDonalds and the MacLeods have a bloody but fascinating history, as Sam and Graham showed. The ancient feud, for control of the waterways surrounding the islands, erupted more than once into war and massacre. Skye has more to it than beautiful scenery – with the remains of Trumpan Church holding vigil for the souls killed there. This account of the feud and the sites associated with it on Skye is from historian Colin MacDonald’s Son of Skye blog. “The church was surrounded and set on fire with only one MacLeod, a young girl, surviving.  She fled to Dunvegan Castle, raised the alarm and a body of MacLeods went quickly to Trumpan to meet the MacDonalds in battle. The MacDonalds were wiped out, and the story goes that their bodies were buried under a turf dyke, giving the name to the battle now known as The Battle of the Spoiling Dkye.” 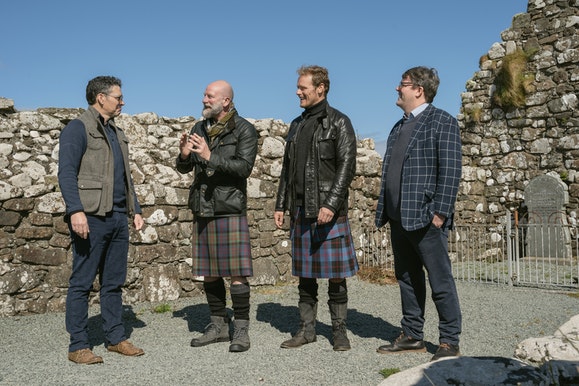 Sam and Graham’s stop at Prickly Thistle, the only woolen mill in the Highlands, was very short, but gave you a quick glimpse into what it takes to make a tartan. Owner Clare Campbell doesn’t weave existing clan tartans so as not to compete with other mills who have long made those their business, instead creating new tartans and bespoke commissions. The mill opened in 2018, following a Kickstarter campaign (after a first failed one) that was backed by many Outlander fans. She sells a beautiful array of environment-conscious products, and has partnered with other area artisans to create some unique offerings through her website 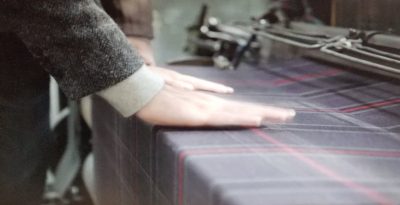 I spoke with Clare today, and we’ll have some clips from that interview tomorrow on our Outlander Gab on the Air – Men In Kilts Edition radio show. The whole interview will be published a little later this week. Learn how Sam Heughan was instrumental in helping get this exciting project up and running, Prickly Thistle’s guiding philosophy, and more about the drive of this amazing woman. Sam’s Sassenach tartan was woven here, on Prickly Thistle’s 100-year-old machines. The segment was filmed in 2019, as part of the first Clanlands filming. 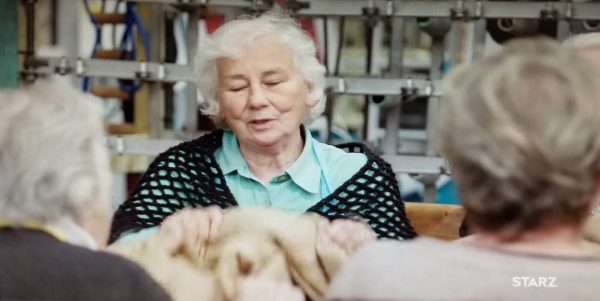 The wool waulking segment, Clare told me, was also filmed at the mill, on her dining table! And both Sam and Graham were taking pictures with all of the women from the group, including one who “is as old as our oldest machine,” she added (1929). But she was thinking, “I have to have Christmas dinner on that table…” Of course, we remember the wool waulking segment from the Rent episode on Outlander! And my friend Sam Kraupner told me that this was not Graham’s first experience with waulking – he participated in it during an event in North Carolina, and an event in Scotland that Samantha attended with this same wool waulking group (she’ll talk about these on the radio show tomorrow night as well).

On to another piece of Scottish history – many of you may be familiar with the story of Rob Roy McGregor, mostly from the Liam Neeson film. It was interesting to learn, though, that Rob Roy, in addition to being a hero of Scotland, ran a protection racket and used “black mail” to enforce it – fail to pay him to “protect” (i.e. not steal) your cattle, and oops, that’s exactly what he would do. But where is this hero buried? That’s the dispute between the McGregors and the MacLarens. 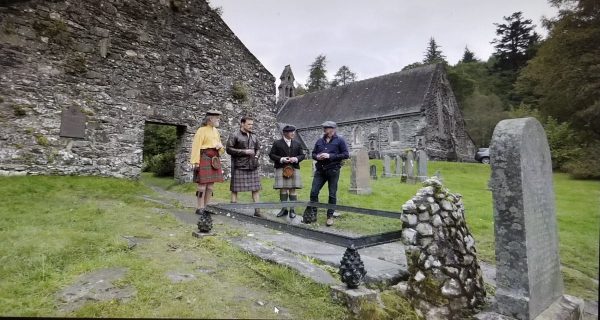 Common lore says that Rob Roy, along with his wife and two children, is buried in the Balquihidder Kirkyard, and that’s certainly the position of the McGregor clan. And as we heard, the MacLarens disagree – spokesman Donald MacLaren (doesn’t he have a GREAT voice?) obviously thought it was unlikely, given the animosity between the clans. But beyond that, Balquihidder Kirkyard has more than a burial as fascinating history. According to Undiscovered Scotland, “Balquhidder Kirkyard… reflects the continuation of a tradition of worship in the glen that goes back 4,000 years or more. The Celts believed this to be a ‘thin place’ where the spiritual world and the earthly world came close together. To the south is a spur of Ben Ledi (“the hill of God”) and traces of a Neolithic temple dating back to 1800BC have been found in the glen.”

And on to family castles, real and fictional – the McTavish family’s Sween Castle is definitely a wreck, but it was still great to see (despite apparently having become an RV park). Graham mentions that he believes it to be the oldest “stone built castle” in Scotland, and that’s widely thought to be the case. HIstorians date it to the 1100s. The castle is in Argyll, and “it and its adjacent sea loch take their name from Suibhne (Sven) ‘the Red’, a chieftain of Irish descent and ancestor of the MacSweens. He probably built Castle Sween in the 1100s, a time when Argyll lay outside the Kingdom of Scotland,” according to Historic Environment Scotland. Sam and Graham’s seaplane flight into the loch was a little bit of fun! And that this was Graham’s first sight of his family seat was a great experience for him and viewers alike.

The next trip wasn’t quite as touching, seeing as it was to Jamie Fraser’s historic home, and despite how we feel about Outlander, Jamie is, decidedly, fictional. That didn’t make it any less exciting! Ruins are interesting to look at, but the current Beaufort Castle, in Beauly, is unexpectedly lovely. Built during Victorian times (so this would not have been Lord Lovat’s Beauly), the castle is the 13th building on that site, and was purchased from the current Lord Lovat in 1995 by a bus company heiress. 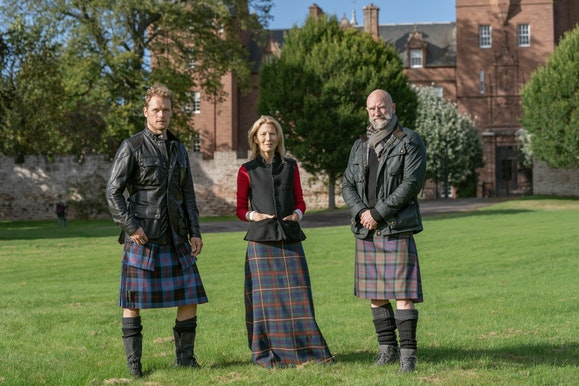 The episode ended with quite a lavish feast – but I’m not sure those fish heads would have done much for my appetite. The two handsome men, though, decked out in their kilted best, certainly would have been excellent company! Next week, though, we’re on to much more sober subjects – the battle of Culloden, and its effect on Scotland. 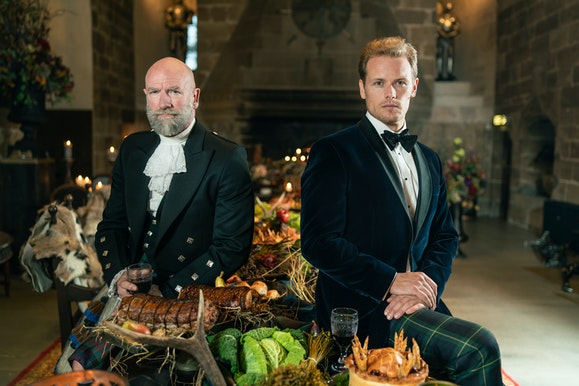 (Just for fun, these pictures were included on the Starz media site, but weren’t seen in the show. I thought you might enjoy them.) 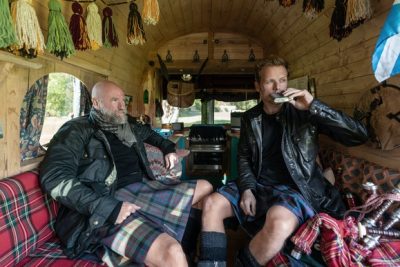 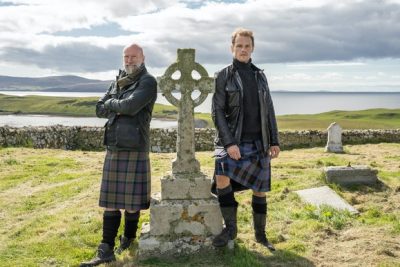 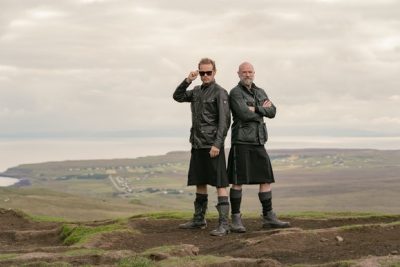 Tomorrow night, Tuesday, 9 pm eastern/8 central/6 pacific, join us at blogtalkradio to talk about this week’s episode! I’ll play a couple of clips from my interview with Clare Campbell from Prickly Thistle. Samantha will talk about her personal connection to Beaufort Castle, and we’ll chat about anything else in the Outlanderverse that comes up! Links to listen live to this one and to past episodes, as well as our call-in phone number, are available here.