Men in Kilts: Season Finale, and Win Some MIK Swag!

Ending the first season (we hope not the only) of Men In Kilts, we are taken to the sacred ground of Culloden. Far from being some ancient battle with no meaning for today, Culloden continues to ring through Scotland, marking a period “before” and a period “after,” when the country was forever changed. Sam and Graham gave us a great view of what the battle must have been like, and how important it is still today. As Graham said at the end of the episode, “In a weird way, all the roads led us to that point.”

This episode was more cohesive and better put together than previous episodes have been, partly because a single subject was explored in depth. There was little of the joking banter the guys have been doing for seven previous episodes, and it would have been truly out of place in this one. The weight of the battle was obvious in the sincerity that was brought to it. Sam and Graham are both aware of the seriousness of the subject, and treated it with appropriate care.

Starting with historian Alastair Moffatt was a good choice. Moffatt has written many books about Scotland and its history, from explorations of islands and walls, to the DNA and genetics of the British isles (click here for more information). The overview of the battle was important to understand everything that came after it – Cumberland’s new tactics, the doomed Highland charge. From there, we could move out to the where and the why. 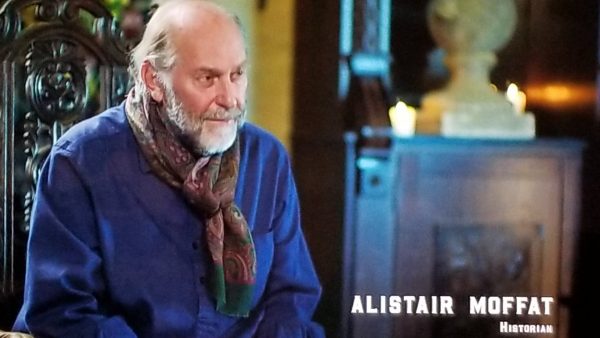 Being able to touch and handle the weapons that both the English – the “government soldiers” – and the Highlanders would have carried gave them, and the viewers, a better view on what happened that day. And clips from Outlander were appropriate here – the show also treated this subject carefully and as realistically as a TV show can do, and the clips helped to illustrate the mayhem of the hour. 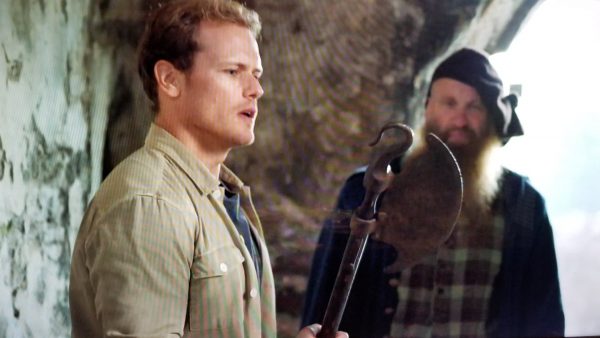 One of the guests, Charlie Allan, a combat re-enactment specialist, was mentioned in Clanlands:

One thing about Charlie Allen is, he doesn’t look like a ‘Charlie Allen’ – he really looks like more of a Ruaridh McMurderer or Angus Og McBludgeon. As he walks up the bank of heather surrounded by the menacing Bidean nam Bim massif on the southern side of Glencoe – the ridges of Stob Coire Sgreamhach, Stob Coire nan Lochan and Aonach Dubh glowering down – Sam and I instantly feel emasculated. ‘He looks like a f*cking beast!’ says Sam, who visibly shrinks in his presence. I suspect Dwayne ‘The Rock’ Johnson would start to cry.  – Graham

Charlie and the other two re-enactors with him, Graeme Carlyle and Finn Allan, certainly looked like something out of the 1700s, didn’t they? And though I don’t generally have trouble with accents, their Highland speech was just slightly beyond me – and I loved it. It lent a bit more authenticity to the lochaber swinging that went on! If you want to know more about the weapons that the Highlanders may have carried, click here.

Another segment on weapons featured the rifles and bayonets that the Government soldiers carried. Just the thought that they would pivot to the Highlander diagonally to catch them with their arms upraised was chilling! Iain Bowden and Jim Elliott, armorers who worked on Outlander, gave Sam and Graham a view from the other side. However, I wasn’t crazy about the enthusiasm that Graham definitely showed, and Sam to some extent displayed, for the use of the dirk – that was probably the only bit that seemed out of place to me. At that moment, it felt more like “boys with toys” – something that the guests said just a few minutes before. 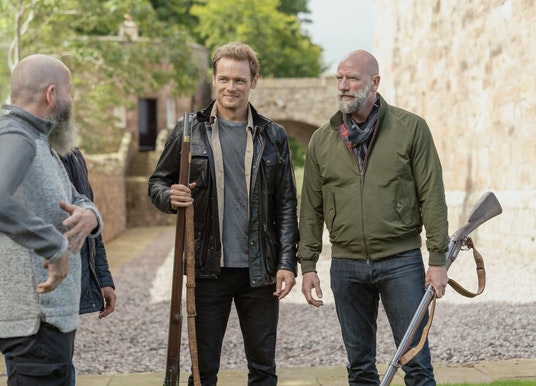 And from there, they went on to Culloden itself. Historian Catriona McIntosh gave them the story from the field, and showed Sam and Graham around the historic grounds. 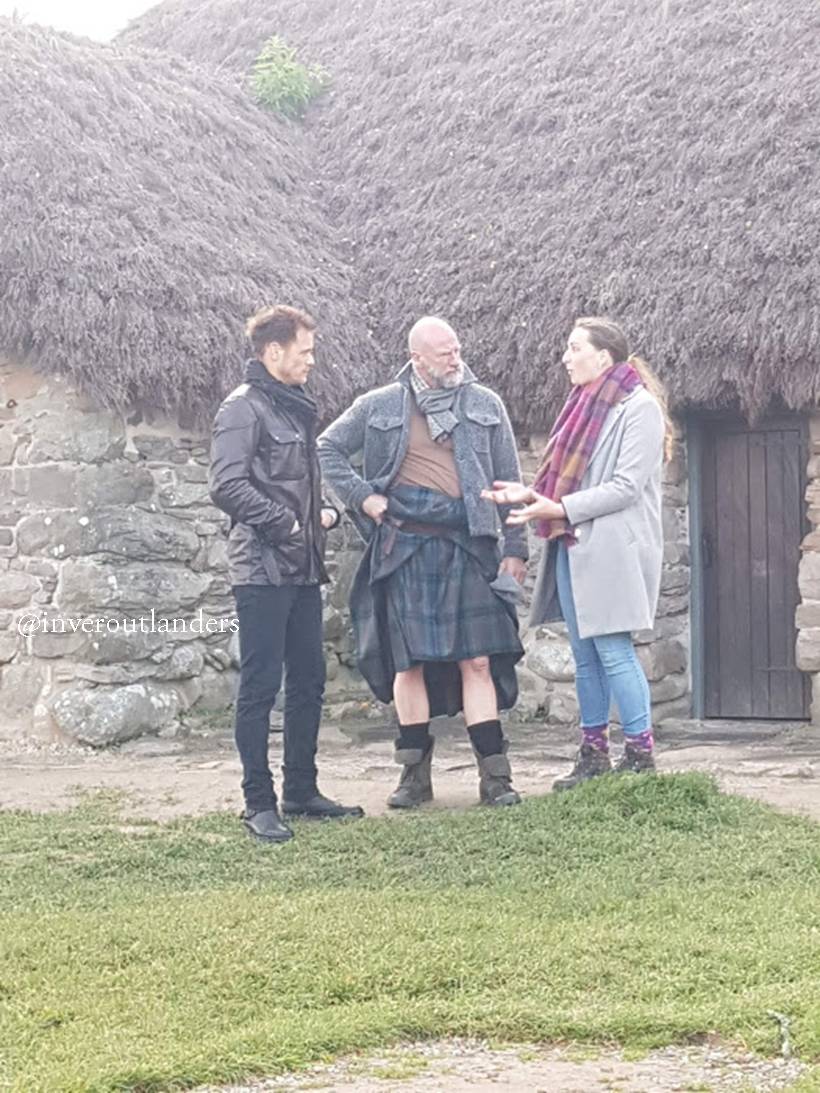 used with permission from Sinead Robertson and the Inverness Outlanders

The tour started at Leanach cottage, which was likely a field hospital for the English. It’s believed to be the oldest remaining building from the battle, and has been recently surveyed to learn more about the building. You can get more information here. And then she walked Sam and Graham down the line that the Highlanders charge started on, looking at a 300 yard run to meet the English, and certain death.

The solemn tune played by the City of Inverness Youth Pipe Band was incredibly stirring. Here are the young members of the band with Sam and Graham. 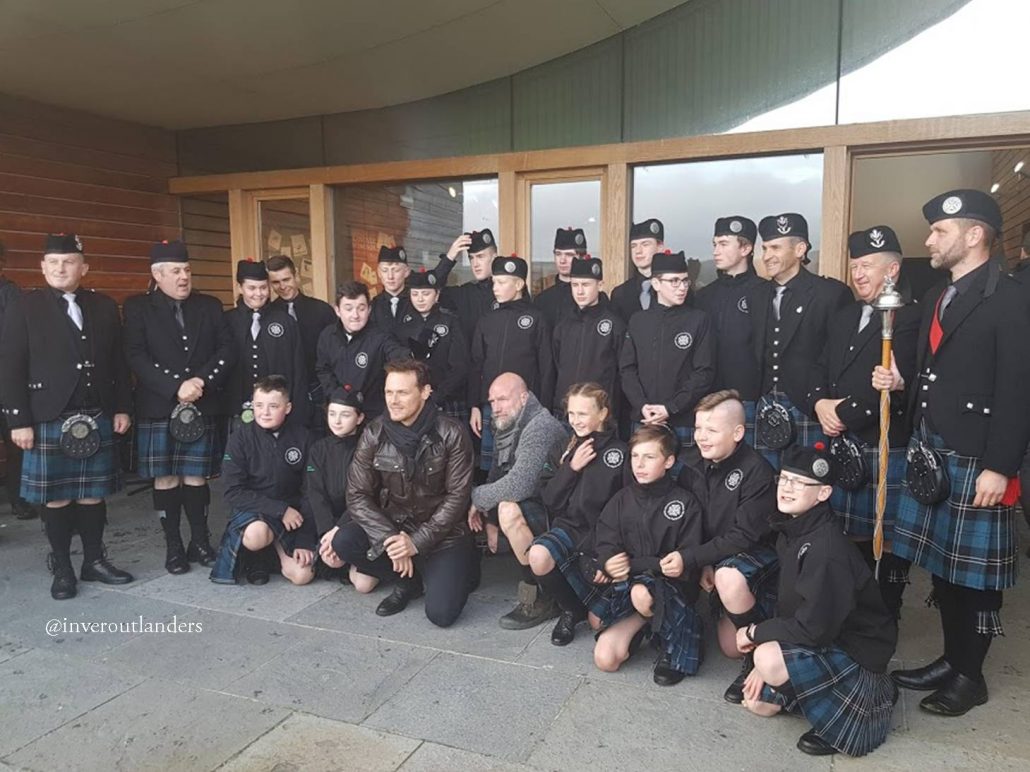 And the tour of Culloden was piped out by Iain McGillivray, walking solo across the field, playing Lochaber No More. 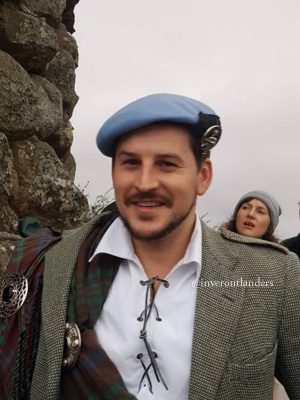 used with permission from Sinead Robertson and the Inverness Outlanders 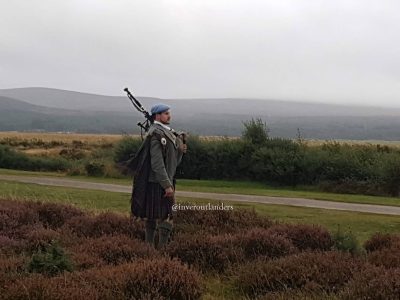 Thank you, Sam and Graham, for giving us this often fun and always informative look at a country so many of us have fallen in love with! I definitely hope there will be a second season, because the joy and interest they bring to their travels is a delight to watch. Want to walk in their footsteps? Frommers, the travel guide company, gives us a list of all of the locations and sites from the show. Happy travels, when we finally can! 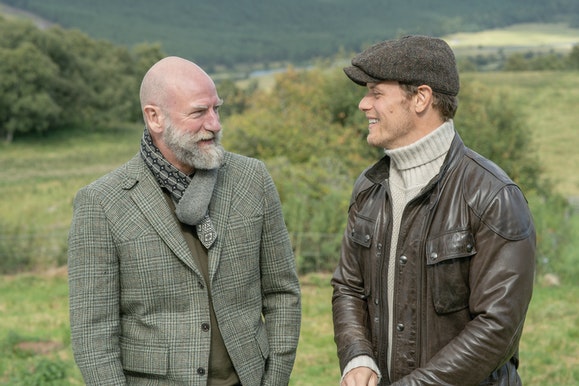 This video is of Tress Maksimuk, the Dark Isle Bagpiper, playing Lochaber No More. Tress has opened many Outlander events, piping in the stars of the show.

There are lyrics to this piece, compiled in 1760.

O why should the hills last, that never were young, ⁠
Unperishing stars in the heavens be hung;
Be constant the seasons, undrying the stream, ⁠
And he that was gallant be gone like a dream?
Brave songs will be singing in isles of the West, ⁠
But he will be silent who sang them the best;
The dance will be waiting, the pipes will implore, ⁠
But he will return to Lochaber no more!

Child of the forest! profound is thy sleep, ⁠
The valley that loved thee awakes but to weep;
When our fires are rekindled at dawn of the morn, ⁠
Our griefs burn afresh, and our prayers are forlorn;
The night falls disconsolate, bringing no peace,
⁠No hope for our dreams, for our sighs no release;
In vain come the true hearts and look from the door, ⁠
For thou wilt return to Lochaber no more!
– Neil Munro

Live Stream for the 275th Anniversary

The Inverness Outlander group was present in 2019 while Sam and Graham shot these segments for the original run of filming, and gave us permission to use some of their photos from that event. They will have a special live stream on Friday, April 16, featuring Diana Gabaldon and other guests, to commemorate the 275th anniversary of the battle. See the details here:

Want to get your hands on some of the great MIK swag that Starz sent me? I have two separate prize packs available to win! Each prize pack will include one of the MIK-branded cocktail napkins – frame it, use it, whatever… (the box behind the prize items is NOT included.) And it’s easy – comment below what your favorite MIK segment has been, and then click the “I commented” option in the Rafflecopter box. You can also get an extra entry for following me on Twitter. US addresses only, since I pay for all the postage myself. (NOTE: If you have trouble accessing the giveaway entries or leaving a comment, please try another browser or device, and we have had reports that Apple products are particularly troublesome. Sorry, I am not offering any other option to enter.) This is a short one – contest will close Tuesday evening, because I’ll be heading out of town this week and want to get your prizes in the mail! 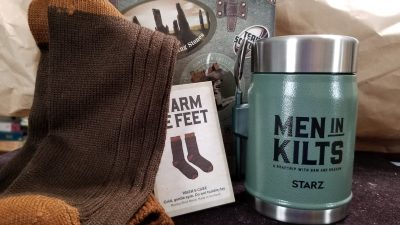 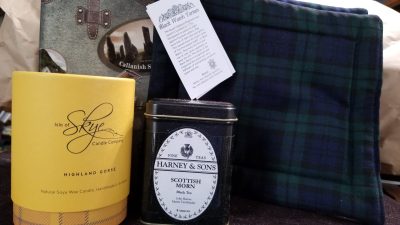 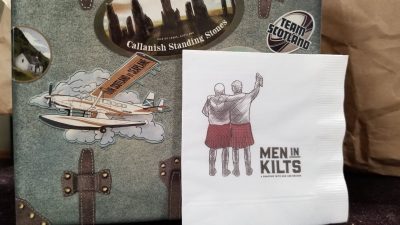 Tuesday night – radio! The Outlander Gab on the Air – Men In Kilts Edition will also come to an end! Join us at 9 pm east/8 central/6 pacific to chat about the show, this episode, and anything new and fun in the Outlander world. PLUS! Three random callers will each win one of those cool MIK napkins! Click here to listen to past episodes and get our call-in phone number!

Join us for fun on Facebook at Outlandishly Three If By Space!