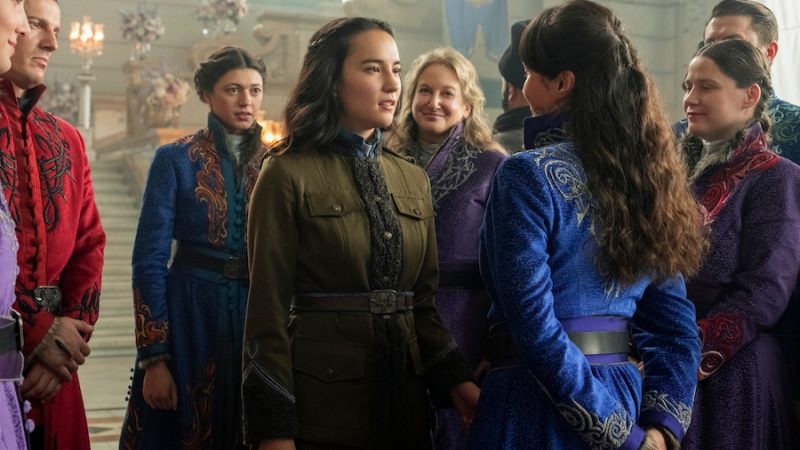 Dark forces conspire against orphan mapmaker Alina Starkov when she unleashes an extraordinary power that could change the fate of her war-torn world.

Based on the book series Shadow and Bone, and Six of Crows, by Leigh Bardugo, the 8 episode series covers the Grishaverse. In a world that focuses on ‘the fold’. The fold is a darkness that splits the kingdom of Ravka in half and was believed to have been called into existence a very long time ago by a Grisha called the Darkling. Grisha are people with the ability to manipulate the elements, such as fire, wind, and manipulating people’s hearts (heart-renders). One such Grisha learns she has a power that no other has and is simply of legend and she may have the power to rid the world of the fold. The series is very short, just 8 episodes but a lot of world-building goes in in those 8 episodes.

This extensive world-building means you have to get more than halfway through the short episode in order to get to the core plot of the season. The fold has monsters in it and it prevents people from crossing it without getting killed. However, we quickly learn people are getting through it all the time, which starts to shatter the Illusion of some big bad from this dark barrier. The Grisha are hoping to rid the world of the fold and reunite Ravka under their rule. Ever since the fold came into existence as a result of a Grisha they have been persecuted.

The costume design and diversity of the world do stand out as one of the strong points of the series. Representing all walks of life, race and disability made the story feel more grounded in itself versus standing alone and standing out of its world. The idea of who to hate and who to like is also left ambiguous for most of the series. As we make it to the halfway point, and the broader plot details begin to reveal themselves we start to get a better picture of the world we are in, though outside of our core set of Grisha we don’t have enough time to really dive deep into the other characters stories.

At the end, you are more united around our lead character then ever but you still feel as though there are others you could give a second chance to. But should we?  Shadow and Bone tries to pass itself off as high fantasy but the series, in its first season makes it to the finish line on fumes. As we end the series, we finally feel like things are at a start, our journey is ready to go. But alas it’s the end, and there is no more to watch just yet.

Shadow and Bone take commitment to see it all the way to the end of the 8 episodes to get invested. For some, that may be too long, but when finished even with the struggle to latch on, you will be left wanting to see more of the world and how our characters tackle the war that is coming.