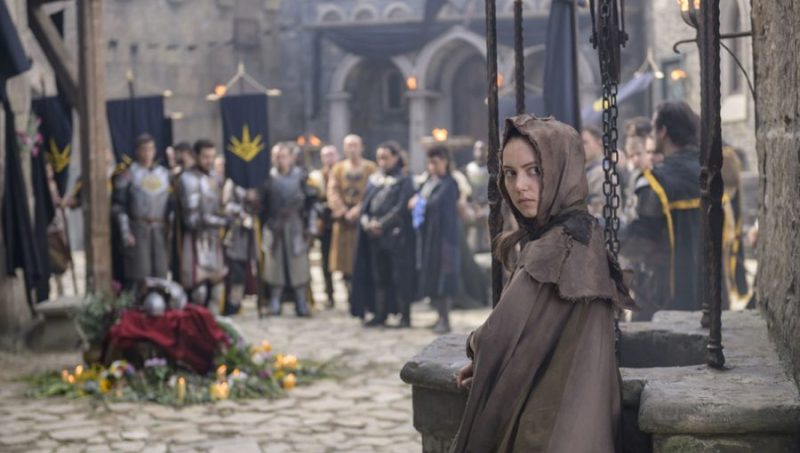 Like a long-departed friend that has at last returned, The Outpost finally came back into our waiting viewing arms with the first episode of its fourth season (or season 3B as the network likes to call it). And there’s no way to sugarcoat this – I thought it was the best season opener The Outpost has produced. Well done to writers Jason Faller and Kynan Griffin, as well as director Milan Todorovic — thought you nailed this one. There’s a lot of information flowing from a show titled, “Someone Has to Rule,” including the question of who should rule — either by popular demand of blood succession.

The season opener tosses out wonderful little tidbits of information seemingly with every new scene, something I really enjoyed the hell out of. I like a show that’s crisp and on-point from the start, even when the scenes are short. And I especially like them when they are answering questions or posing new questions to the audience. I think that’s just what episode 3B01 does for the audience – answers and asks in an interesting and intriguing way. 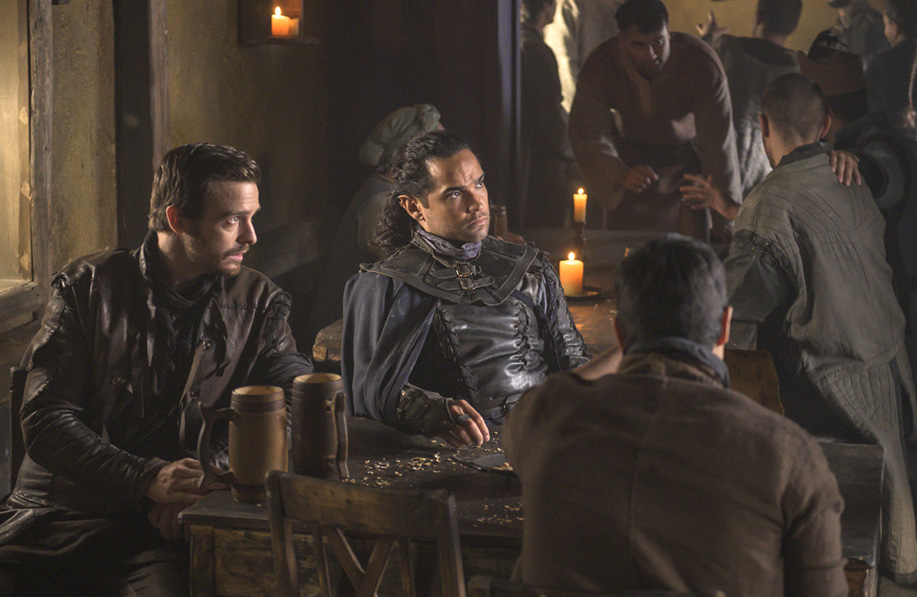 So, without further pontification on my enjoyment of the first episode (oh, I’ll pontificate some more. Count on it), it’s my duty to inform you that there are SPOILERS on the road ahead. So, if you haven’t seen episode 3B01 (or 401) yet, or SPOILERS don’t bother you, be aware that we’ll be serving up some juicy little tidbits in the coming paragraphs. So, you have been forewarned and that makes your forearmed, so here….we….go.

There’s a lot of goings-on happening in the wake of Queen Gwen and Tobin Aegisford’s deaths at the end of last season. One good note is that Falista appears to be recovering from her injuries, but all is not well with her. I’d hoped that the final couple of episodes of season 3A had helped Falista to mature a little bit, as well as reassess her priorities and her ambitions. Not so, it turns out. I found Falista to be a  huge emotional disappointment in this one as she seemed to feel that the loss of her Tobin wasn’t being met with the same reverence as the death of the queen. Shocking, I know, but there you have it. And that jealousy, coupled with her emotional hurt and ever-present ambition pushed her to a path that should have serious ramifications.

Look, I’m delighted that Two and Three popped up again, but when you make a deal with the devils, there’s a price to pay. No, I’m not talking about the 20 soldiers and attendants sacrificed so that Two could revive Tobin (That’s right, he’s baaaaack), I’m talking about their offer to make Falista one of the Three. That’s right, Two and Three want Falista and her red kinje to join them in re-animating The Three and assume rule over the Realm. Is there something key for them to need three? The “Gods” seem pleased as they offered some ominous messages. The fact the Gods can communicate to The Three via the kinje is an interesting tie-in, don’t you think? More on that, please. 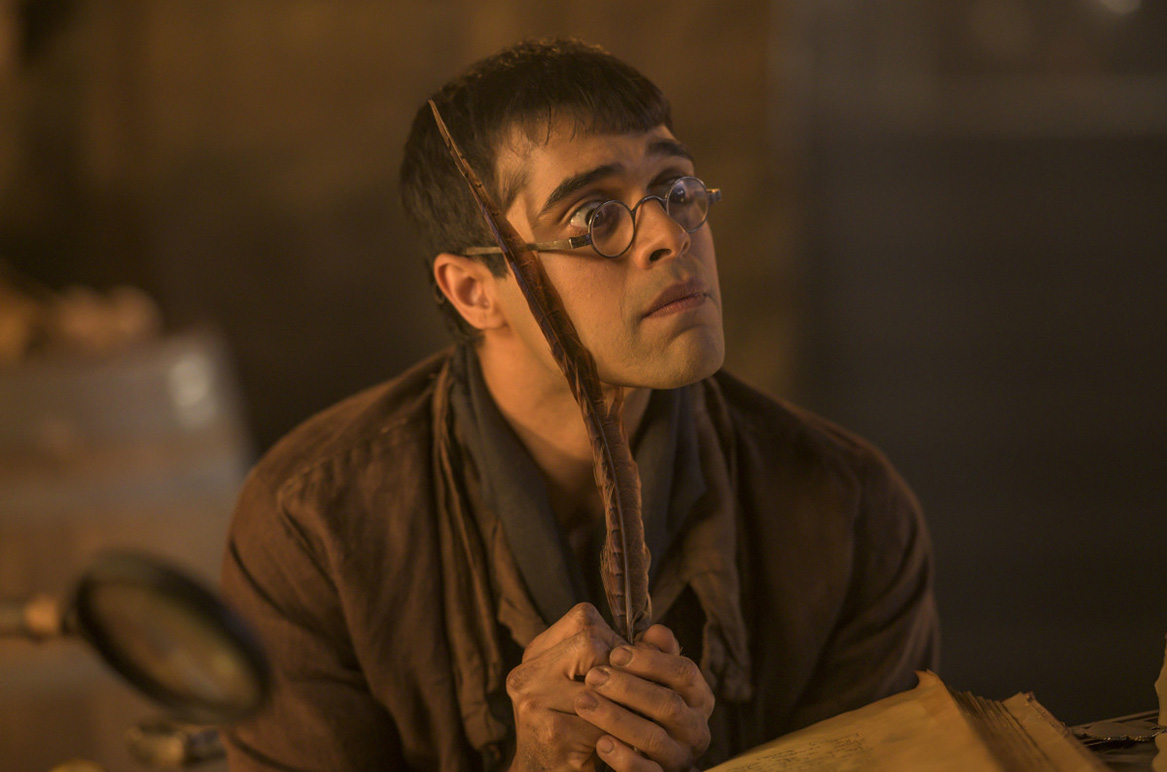 Heady stuff for Falista, I’m sure. One moment she’s kind of on the outside looking in, wondering why others aren’t sharing the same pain she is at Tobin’s passing, the next she’s not only confirmed as the legitimate blood successor to Gwen, but she has a chance to double down and join The Three for a little realm oversight. Talk about the fox in the hen house – it would seem to be all she could ever want. And yet I’m still disappointed that the growth we thought we saw by the end of last season seems swept away and pouty, conniving, and even treacherous Falista rises again. Gads, I love Georgia May Foote in this role. She just kills it in the season opener.

Here’s my question. After seeing Tobin stumble out the door and place the crown on Falista’s head, what kind of shape is he in? He seemed to be kind of shambling around a bit and certainly wore a befuddled look on his face. Now granted, he’s been mostly dead for a long while (Calling Miracle Max) and the re-animation of his body is certainly no easy charm, but a part of me wonders if there’s a bit of Tobin that was lost. Also, can Three do anything else but orb in and out? Just a thought. I mean Two can reanimate the dead….that’s pretty sick powers. So, wonder if Three is holding back a bit in the “this is my real power” department?

As for Tobin, I’d hate to see him simply be a puppet for Falista and The Three. I think he’s capable of providing a moral center for the new queen, which I think she’ll need. So, the question is — is Falista now queen of the realm and a member of The Three, whom she called her advisers? That’s quite a double dip of power. Falista’s power play was, for my money, the big story arc of this first episode. In short, Falista for the win. 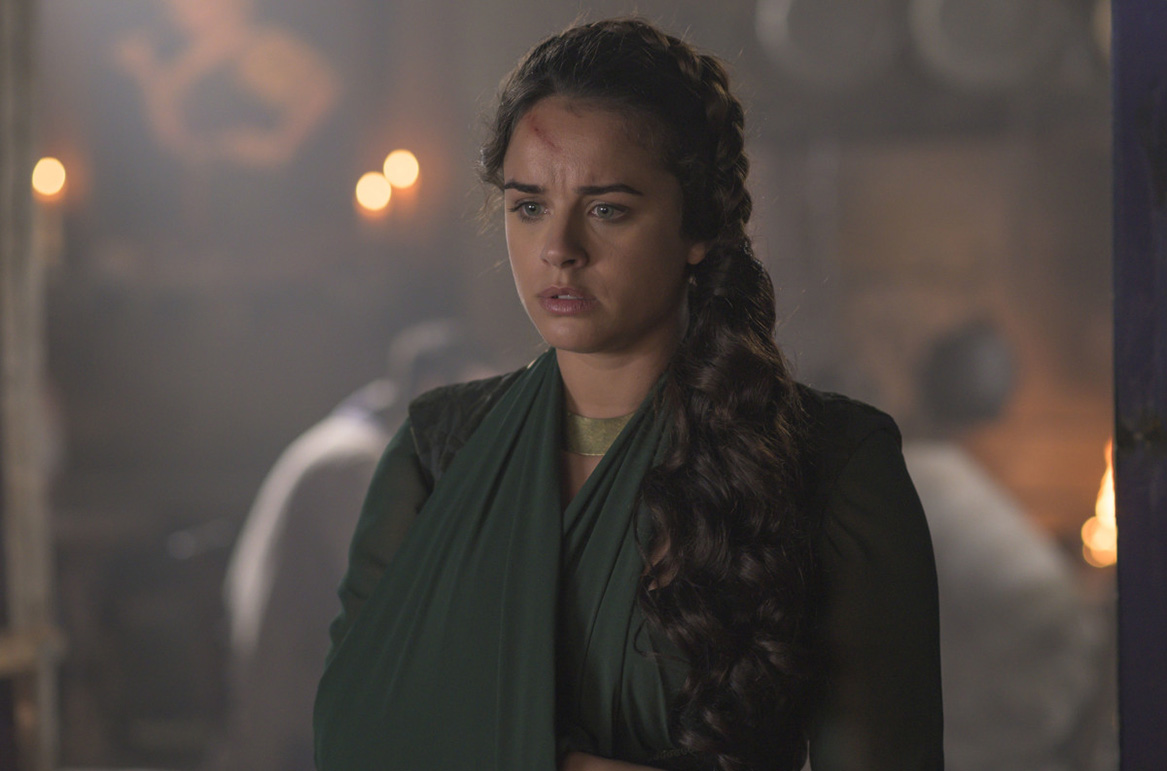 Truthfully, I expect Talon to end up with that crown by season’s end, but I’m not disappointed that she refused it at first, then fell victim to Falista’s power move later on. She’s a natural born doer, but I’m not sure she’s a natural leader. She’s been a lone wolf a long time and, even with Garret at her side (and boy, was she snippy with her lover), she tends to be impulsive and even display a snarky and dismissive attitude at times. Don’t misunderstand, I love Talon (Jess Green really shined in the opener), but heavy is the head that wears the crown and she doesn’t strike me, at least right now, as wanting to really, truly handle that weight.

Even when she talked herself into it at the end, Falista’s play kind of saved her from something I think she was very uncertain of. Still, the shock on her face, as well as Garrett’s and Janzo’s when Falista walked out, followed by The Two and then Tobin, was pretty delightful. All right, we got Falista’s power play out of the way, Here’s a few more things that went on. 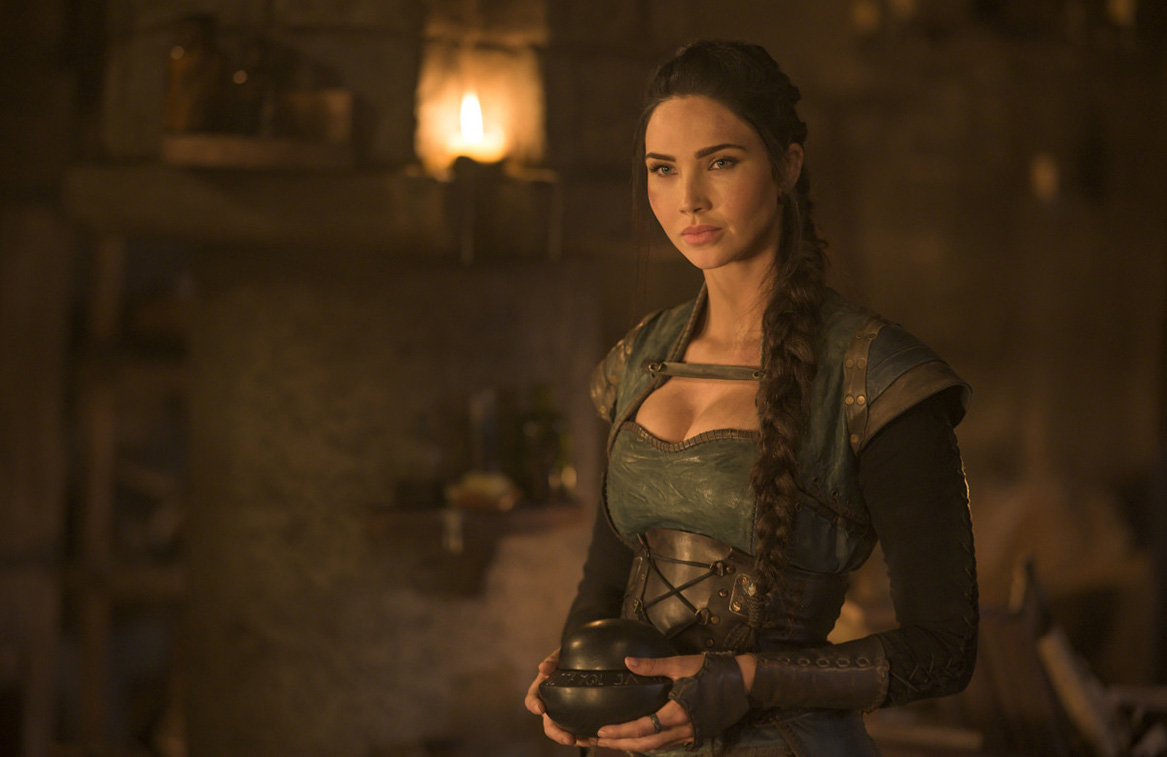 Talon was pursued by a young assassin named Luna (played delightfully by newcomer Maeve Courtier-Lilly), who turned out to be the sister of the Dragman. It’s revenge, is it?. After a couple of bouts of sparring with assorted weapons, Talon informs Luna that it wasn’t she who killed the Dragman, but Reb, whom she dispatched on her own. Truthfully, this little arc only went a few minutes in two separate scenes, which was shorter than I’d have liked, but it got Luna into the show in a believable way and she is now, theoretically, allied with Talon. We still have much to learn about Luna, but she says she owes Talon a debt, so we’ll see where that leads. One thing is certain, Luna has formidable fighting skills, so I’m sure that’s going to come in handy.

On another note, I must agree with Zed in applauding Janzo’s manly efforts with Wren. I noticed that Wren’s ear tips were white early on and wondered if that were just a make-up slip. Not so it turns out. That’s when we find “Janzo and Wren, sitting in a tree, K-I-S-S-I-N-G. First comes love, then comes marriage, then comes baby in a baby carriage.” Well, not really. It turns out the baby part is coming first, a bit of a shocker to Zed as he seemed to think the general thinking was that humans and blackbloods couldn’t conceive. Inconceivable, indeed.

Natually, Wren doesn’t want to tell Janzo right away, Janzo is fairly oblivious, and Zed enjoys torturing Wren with veiled hints, etc. It’s all good fun. Well, maybe not to Wren, who is also being courted to be the next high priestess of the Blackbloods. As the daughter of Yavalla, she is the natural choice to ascend that throne. Interesting how blood succession is such a big theme in this episode, isn’t it? And we get a fun little look at the pressures, attitudes and changes that people want to make regarding it. 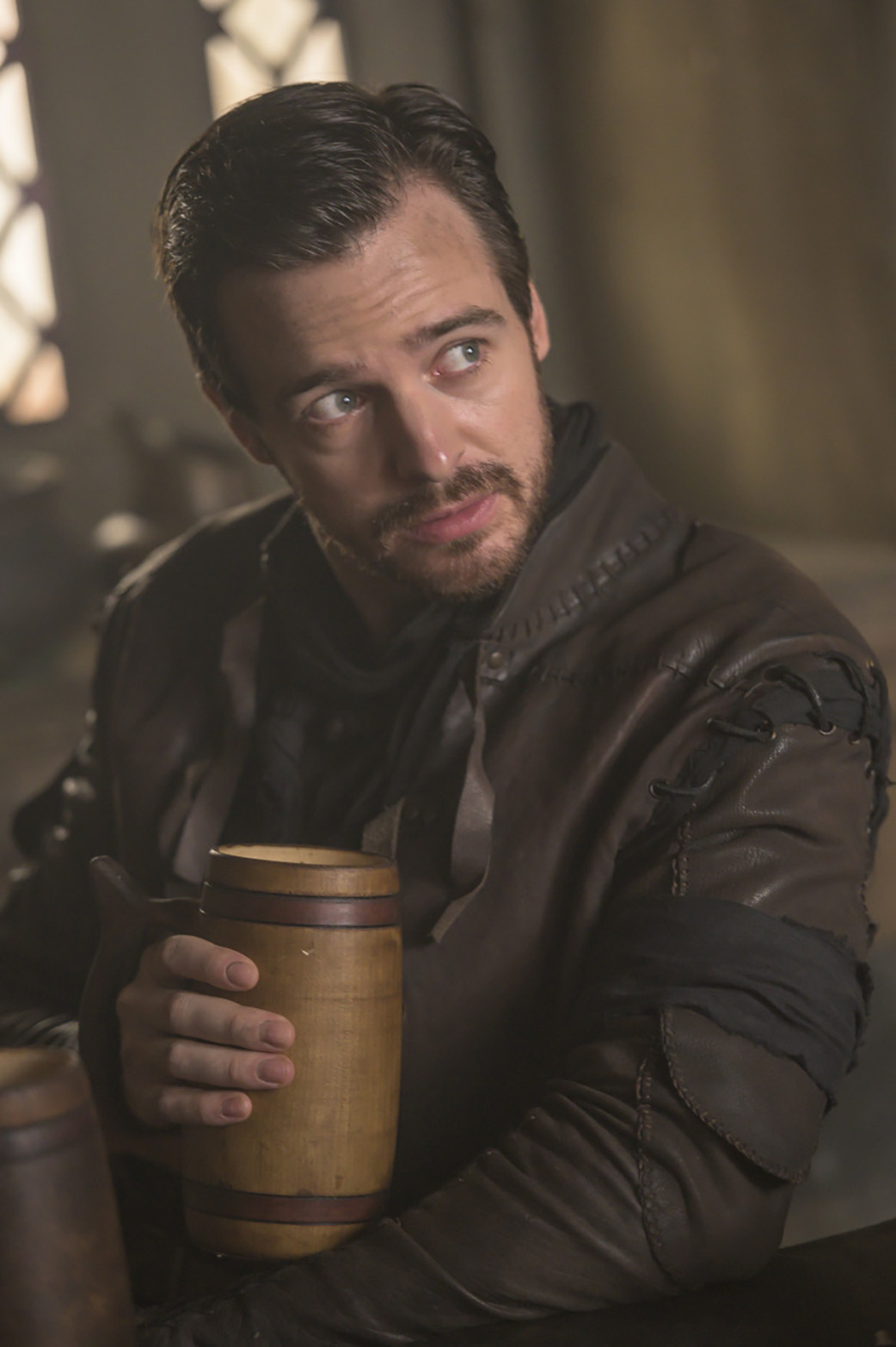 Needless to say, Wren has plenty on her mind without the whole “hey, you’re the high priestess” pressure being applied. She is, as she notes, a woman of science. In that, I can see the high priestess gig offers no appeal to her. Unfortunately, other Blackbloods are already semi-anointing her to the position. The whole Wren-Janzo-Baby-Priestess saga should be interesting to see play out. And again, good for you Janzo. Zed didn’t think you had it in you, but I did. I did, buddy. Amazing that Janzo is still so underestimated after all he’s done and accomplished.

We also got a look at The Gods, who popped in to say hello and offer some ominous words when Falista and Two used their Kinjes. I’m coupling this with the disappearance of the Lu Qiri, which just may have something to do with The Gods returning. There’s a link between the Blackbloods, the Kinjes, the Lu Qiri and the whole relationship with the humans. I’m looking forward to seeing the first play The Gods make and who it will involve. There’s history there and I’m looking forward to some looks behind the Blackblood-Human-Gods curtain. I hope it’s juicy stuff. But can’t Garret find some happiness for a bit? I mean, come on!

And poor Garret, about to make a huge pronouncement about Talon, then left wondering what happened to his plan. I’m sure he, Falista and Tobin are going to have an interesting chat very soon. It’s also interesting to me that, seemingly on the heels of defeating Yavalla, we already have some fracturing amongst factions within the Outpost. You’d think uniting to survive the kinje zombie hordes would have brought people together in mutual understanding. Doesn’t seem so. And notice the guards for The Three immediately reacted when Two and Three walked out. Yes, tensions are mounting, that’s for sure. Can’t wait to see where it leads moving forward.

We’ll talk more about it on The Outpost Calling radio show on Saturday. Tune in and call in.