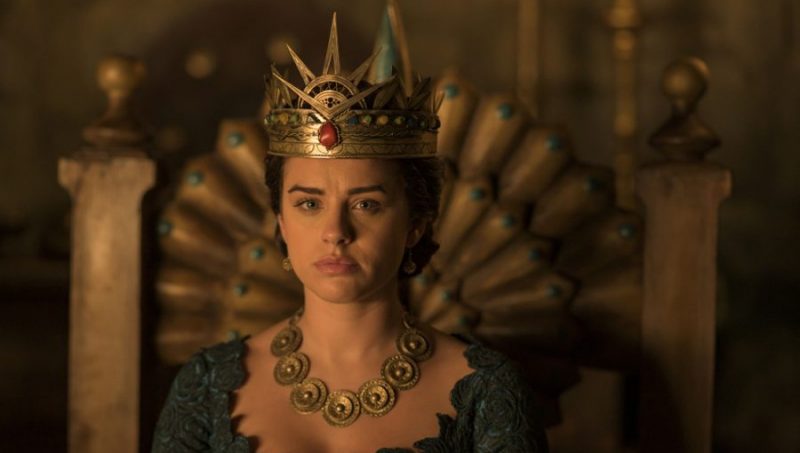 The Outpost: A Glimpse Into ‘Skevikor’ & A Growing Darkness — Review, Ep. 3B04

I don’t think I’m alone in feeling that this season of The Outpost has dialed up the intensity and darkness a bit from previous seasons. There’s a vibe to this season that feels more serious, more threatening, more malicious than in other seasons. There’s also been a healthy amount of guilt added to the pie. There’s little doubt that emotional pain has been a healthy (or unhealthy) part of this season thus far, and it was on display once again in Episode 3B04, “Going To Meet The Gods.”

This week’s episode was a continuation of the three previous in terms of quality and interesting developments. So, in my book The Outpost is now batting 4-for-4 in terms of quality episodes early this season, though this one struck me as different on some levels. More matter-of-fact revelatory than “gotcha” revelations. Still, interesting items popped up and I enjoyed that.

But before we get into things, let me remind you that SPOILERS are ahead. So tread carefully if you haven’t seen this week’s episode. I don’t want you to feel SPOILED by the SPOILERS. If you’ve seen the episode, or just aren’t bothered by the SPOILERS, then feel free to proceed. Let’s talk The Outpost. 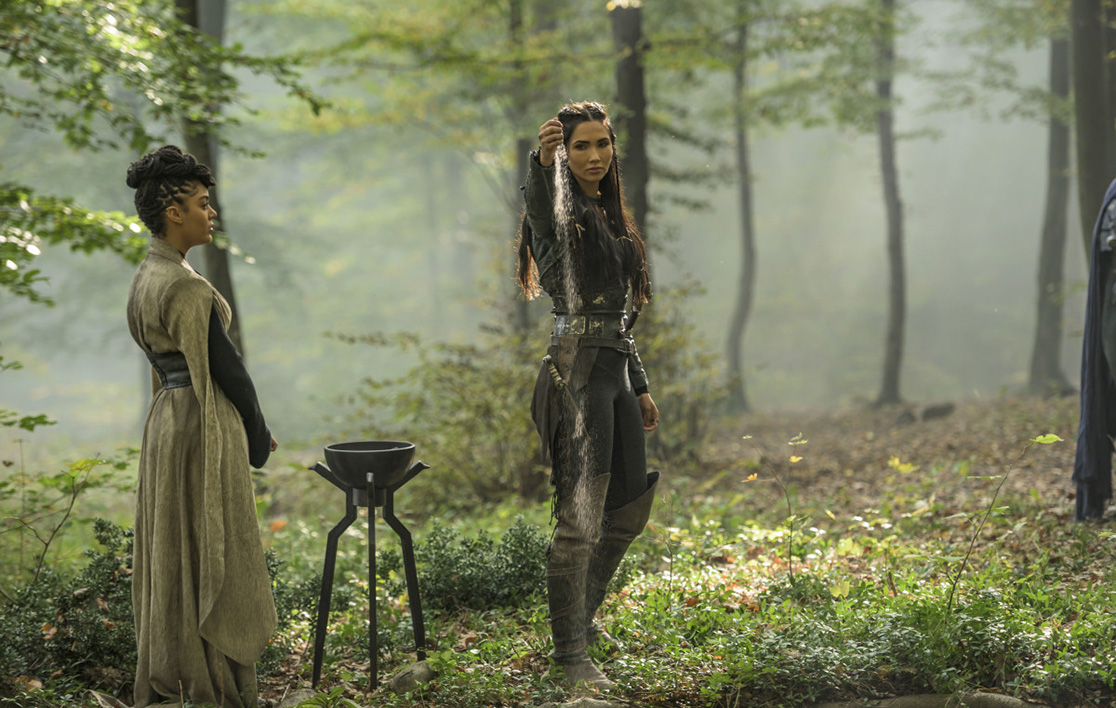 It would seem the Falista’s journey into fully dysfunctional faith fanaticism is proceeding at a nice clip. Thanks to Two’s tutelage, and Falista’s own insecurities and youthful naivete, our young queen now believes she’s fully functioning as a vessel of The Gods. How often in history has cruelty and oppression been hidden behind the curtain of religious fanaticism? In this week’s episode, Falista demonstrates she’s willing to Kinje people, hurt people, even kill people to get her way — all in the name of the Gods.

It’s a path we’ve seen trod before by despotic rulers and I worry that Falista may be walking a path she won’t come back from, or even live through. But there’s a newfound meanness to Falista. She needed something to cling onto as her rule felt unsteady and unsupported from the outset. And she found that crutch in a faulty and false religion via Two and the Gods. Yes, I don’t see much good coming from Falista’s dance with The Gods. It will end poorly, you say? Yes, yes I think it will.

Clearly Tobin is not enamored of The Gods, nor of his wife’s deepening devotion to them. Nor the influence of Two. Once again, against his wife’s wishes, Tobin strikes a secret bargain with Garret to help Luna escape her sentence of death. By the way, for such a clever little operator, I’m begnning to think Luna has a death wish. She’s got this skill and talent, as well as wit and intuition, yet she can’t even summon up the care for herself to stay hidden. Gambling in the middle of the street in the Outpost? Might has well wear a sign that says “Hey, I’m the assassin, come get me.” 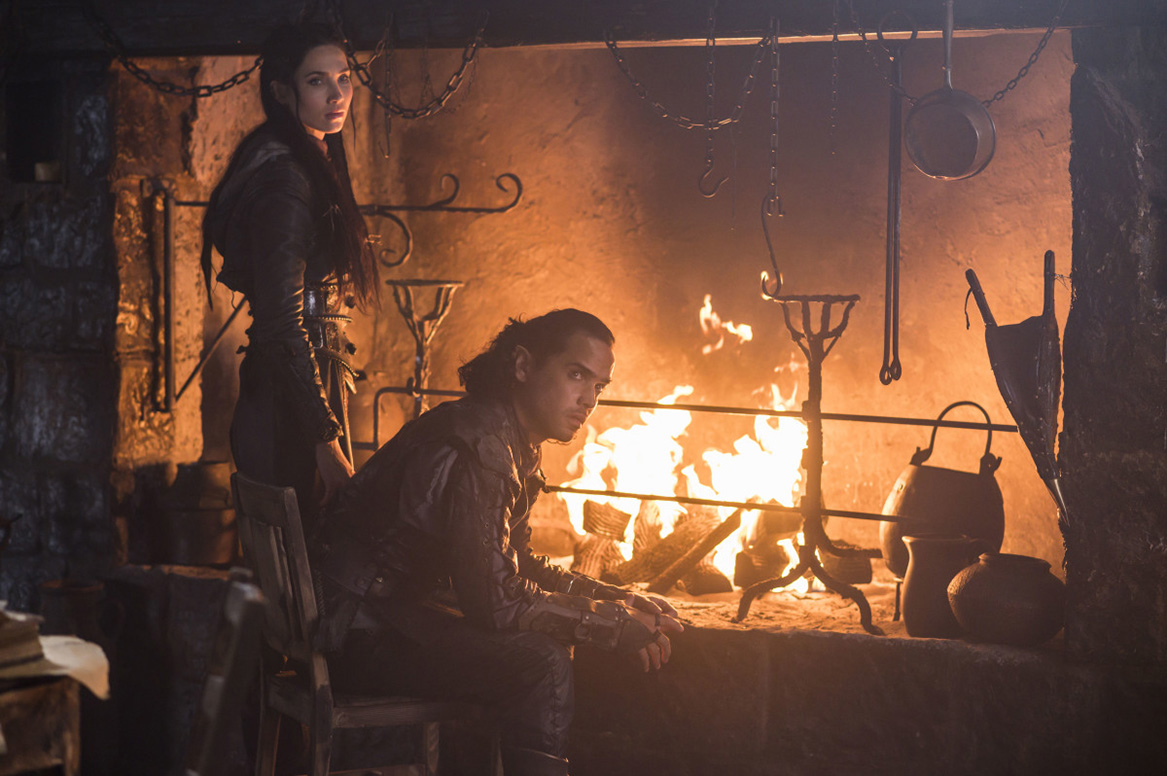 It’s like she was begging to be caught — which Tobin did. Luna is starting to fascinate me more and more. She seems to value her life very little and seems willing to go out of her way to antagonize the people around her. She even gave Talon a little shot when, after escaping and joining Zed and Talon as they tracked Two, said something about Garret “fancying” her. She knows Talon and Garret are an item, yet felt compelled to offer a little shade toward Talon.

I don’t know, while I think Luna has a bigger part to play in this whole thing before it’s over, and I wonder if she has some familial relation to one of our main characters, she seems to be a character that’s altogether too bold and ragged around the edges. She has an edge to her that is both delightful and grating at times. She seems content to push people aside, something Talon discussed with her at one point. But for now, she’s an interesting character. Let’s see where she lands in the coming episodes.

So, now we know what Two was getting all that life force from the prisoners for – to free Vorta from her crypt/chamber/casket. But that leads us to the question of why? I suppose it has something to do with the word Falista wants to know the meaning of, and Wren understands but won’t reveal it — Skevikor! Ahhh, doomsday, Armageddon, Ragnarock, or pick your favorite apocalyptic descriptor, it would seem that The Gods have an interest in total destruction. It would seem, though it’s early, that the stakes of the Outpost and the Realm have just been raised. 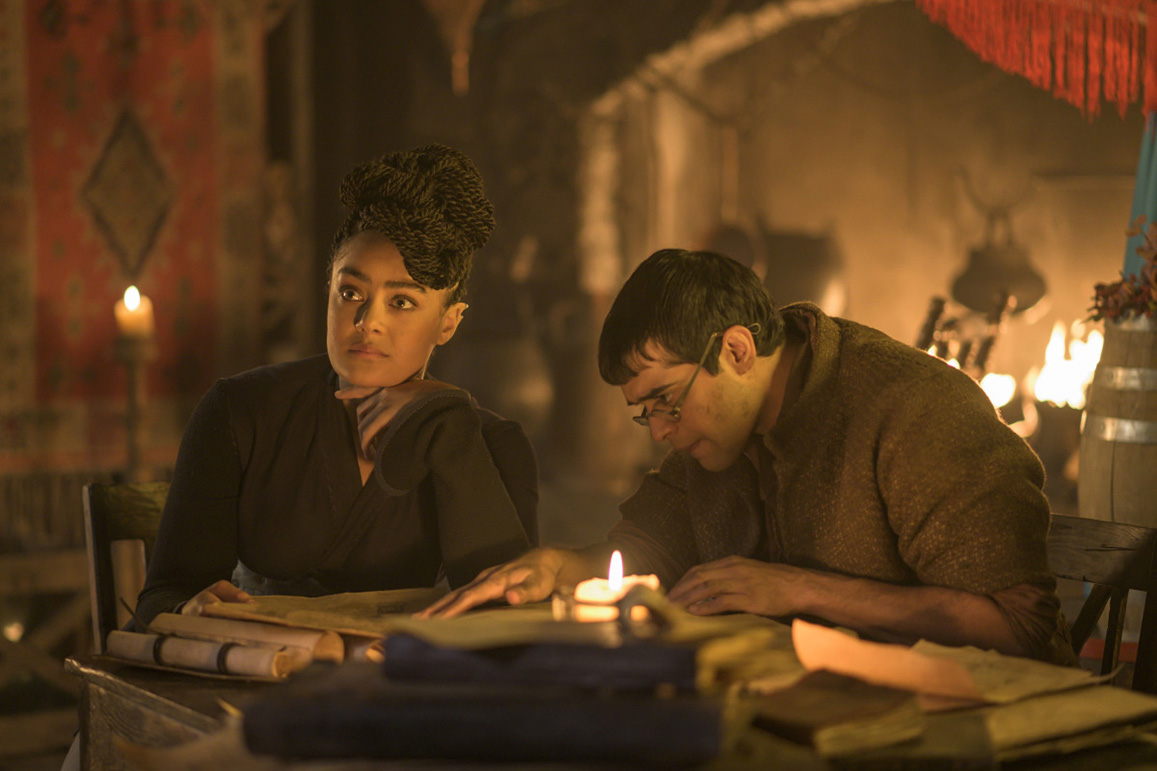 It will be interesting to see what Luna, Talon and Zed do now, having witnessed the “freeing” of Vorta via Two’s life force regeneration. So, it would seem the game has truly begun and one has to wonder just what each roll of the dice is going to produce. As I noted before, I’m worried for Falista, but also have concern for Wren, Talon, Zed and the Blackbloods, who are dealing with the aftermath of seeing their civilization essentially wipes out via civil war in the Plane of Ashes. And everyone involved – Wren, Talon and Zed — seems to be carrying the burden of guilt. On top of all that’s going on, that’s a pretty heavy burden to add to it.

Wren is taking on the role of High Priestess, though somewhat reluctantly, while also trying to decide what to do with the information she denied Gwen. The fly in the buttermilk for her is that Janzo’s speakeasy was busted and now he’s under threat of execution unless Wren produces the meaning of Skevikor within a couple days. Again, it feels like the freeing of Vorta and the revelation of Skevikor point to a season that has, indeed, upped the stakes in terms of tension and, yes, darkness. Lot of sadness going on as we move along, with most of our cast’s lives not delivering joy and harmony. 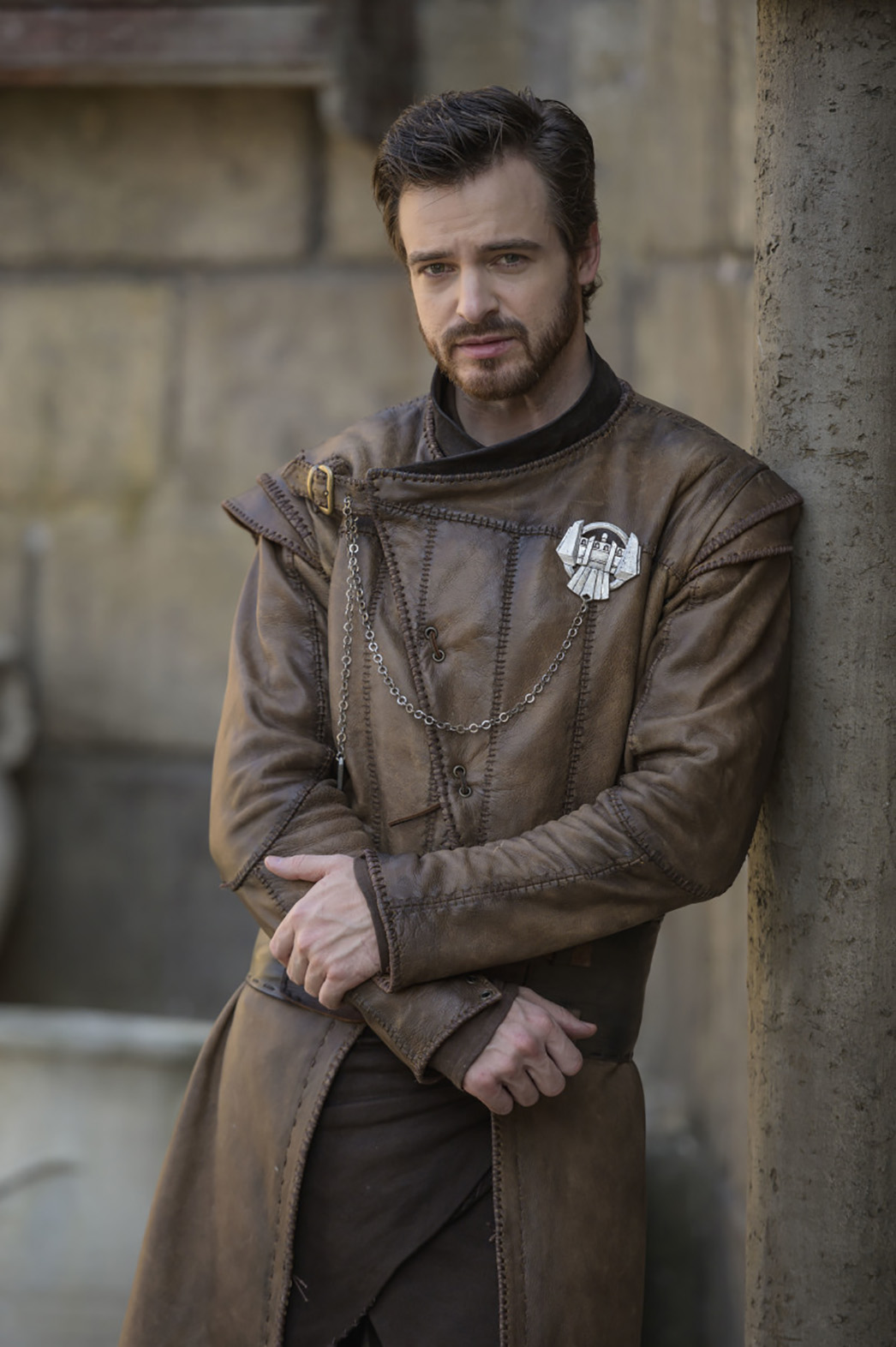 Fortunately, there are two who seem to have found some sense of harmony. Munt and Warlita had a great moment together in the queen’s chambers. They played the part of royals with much delight, then when Munt suggested trying the feather bed, the inference was naughtiness, but the reality was something quite delightful. Munt and Warlita simply wanted to bounce on the bed for fun. Yes, our two new lovebirds (Loved Munt’s description of love as a soup that makes you warm inside but that you can never get enough of) are happily unaware of the darkness that is surrounding their world, but their joyful innocence provides some light within that darkness. I hope it’s a light that will continue to shine through this show to its conclusion.

So, with this week’s episode we finally get our first small peek into what the God’s ultimate plan may well be — the destruction of everything. Wren knows, now Janzo knows, and will Falista eventually know? And with that knowledge, will she find some sense in it all or blindly follow The God’s directives…and Twos? Indeed, it would seem that our heroes do face the greatest challenge they have ever encountered, just as the promos said. Once Talon, Zed and Luna share what they have witnessed with what Janzo and Wren know, things should get interesting. 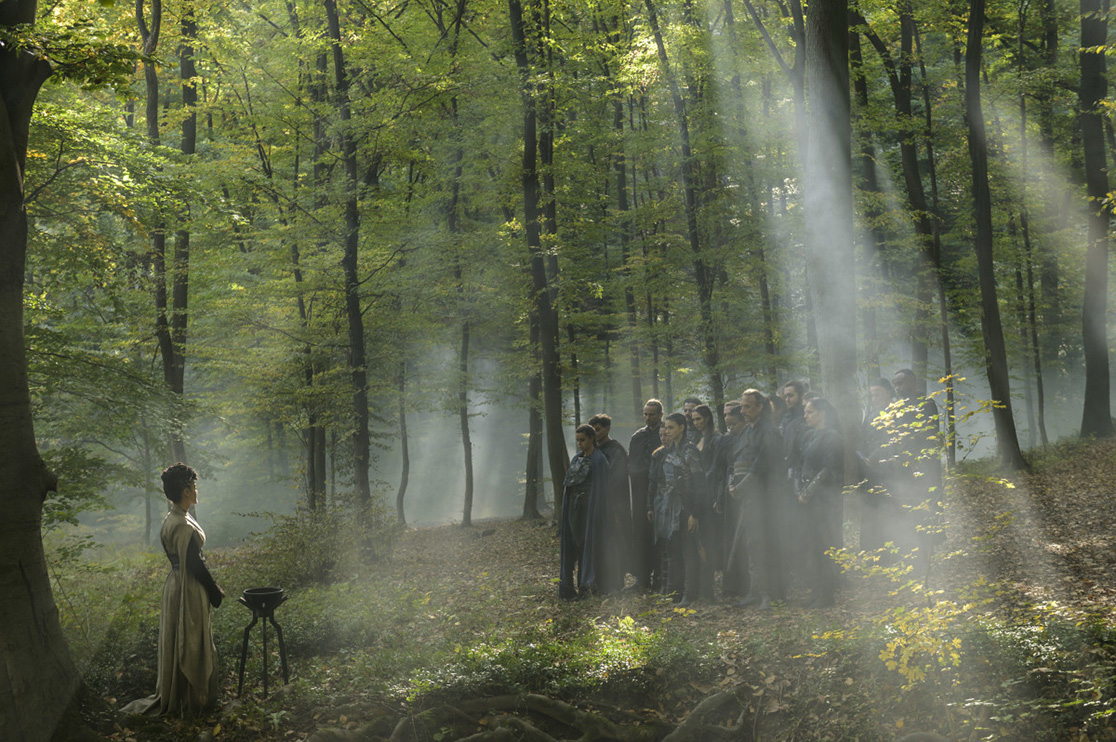 Additionally, it was interesting to see that there is likely a relationship between The Three and The Seven of Blackblood lore. There has been much speculation about that on social media and it would seem that a relationship has been confirmed, along with the knowledge that it somehow ties into The Gods. I’m looking forward to an explanation of how that all ties in. My guess is that the search for the other “Gods” will commence. My question is, how did they lose the Kinjes in the first place and who entombed them for all these years?

Also, a quick shout-out to composer James Schafer’s musical tone setting. It’s always such an under-apprciated part of the story, but when you pay attention, you realize it’s helping move things along nicely. Couple that with Izuka Hoyle’s song during the Blackblood grieving ritual and you had something I thought was pretty special. Well done, you two.