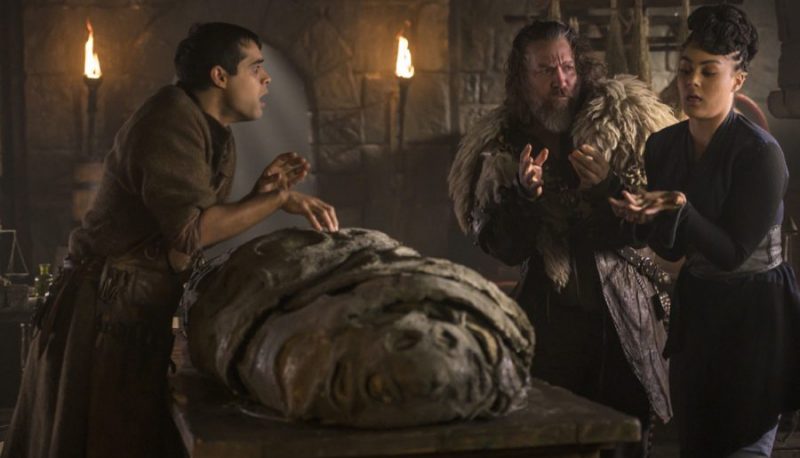 Some mighty strange goings-on for our heroes in an episode titled, “All We Do Is Say Goodbye,” which it should be noted was directed by our former queen, Immy Waterhouse. And what Immy crafted for us in the sixth episode of season 4 is one with plenty of drama, yet more unanswered questions, and a “what the heck” moment that must have left the “Garron” fans feeling more than a little let down.

But before we get rolling, here’s where I note that there are SPOILERS ahead. So, if you wish not to be SPOILED, you should stop right here. But, if you have the spirit of adventure like Talon and Luna, then by all means, let’s proceed.

Perhaps the biggest question that came from this episode is what the heck are those things in the pods? With a little help from the ever-impulsive and non-listening Luna (yes, she snuck back into the Outpost and, as many speculated, freed Garret), Janzo, Wren and Munt were left with the very real possibility that there are thousands of creatures just like “the gods” tucked nicely away beneath the outpost. They managed to get a pod up to the work room and discovered a living, breathing creature within it that looks like our three “gods.” Look, I may have been teasing about the alien potential of the show last week, but perhaps I wasn’t as far off as I’d indicated. 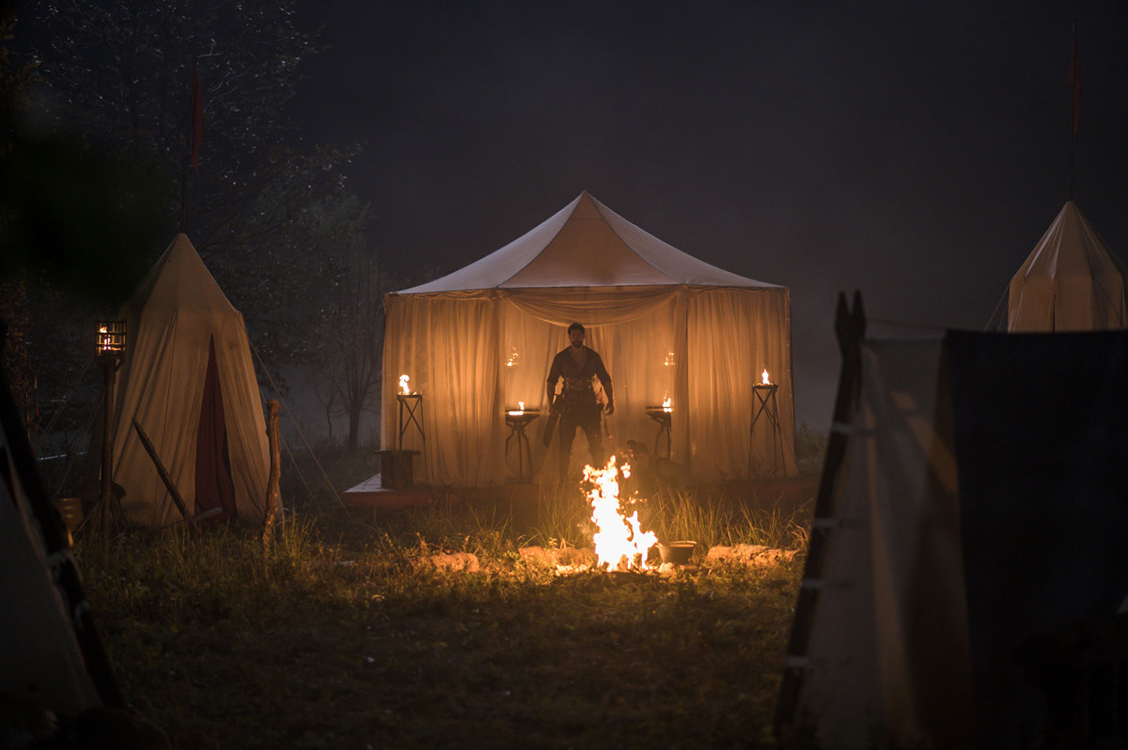 Clearly, ‘the gods’ are another species. Now, where did they come from? The Plane of Ashes? The heavens? Or have they always been here and somehow were defeated/tricked into hybernation and banishment? Again, I keep circling back to the Blackbloods-Creatures-Kinj troika of questions and wonder how they relate — and how Talon’s mother banished some to the Plane of Ashes, and what part, if any did these new beings play? It just feels like it’s all related and that Talon, perhaps, has more power than she knows. I’ve seen that speculated a lot on social media, so I think a lot of us feel the same way. But how will it intertwine — and why? Oh, the creative joys that the writers have wrought!

And if you revive one, can that one revive the lot of them down there in that chamber? By the way, I can’t help but note the chamber lighting, etc. Yes, there’s a very extra-terrestrial feel to all of that, isn’t there. Hey, I’m not saying it is, but I’m not saying it isn’t. Just saying that in a series that enjoys twists and turns, the alien concept would be a massive twist, turn and bump, wouldn’t it? Hey, food for thought. But now we’ve got this “godling” creature on the table and the next questions are very interesting. Is Skevikor the revival of these people and the conquest of all the lands? Is that the doomsday prophecy? Next week’s episode should be interesting. 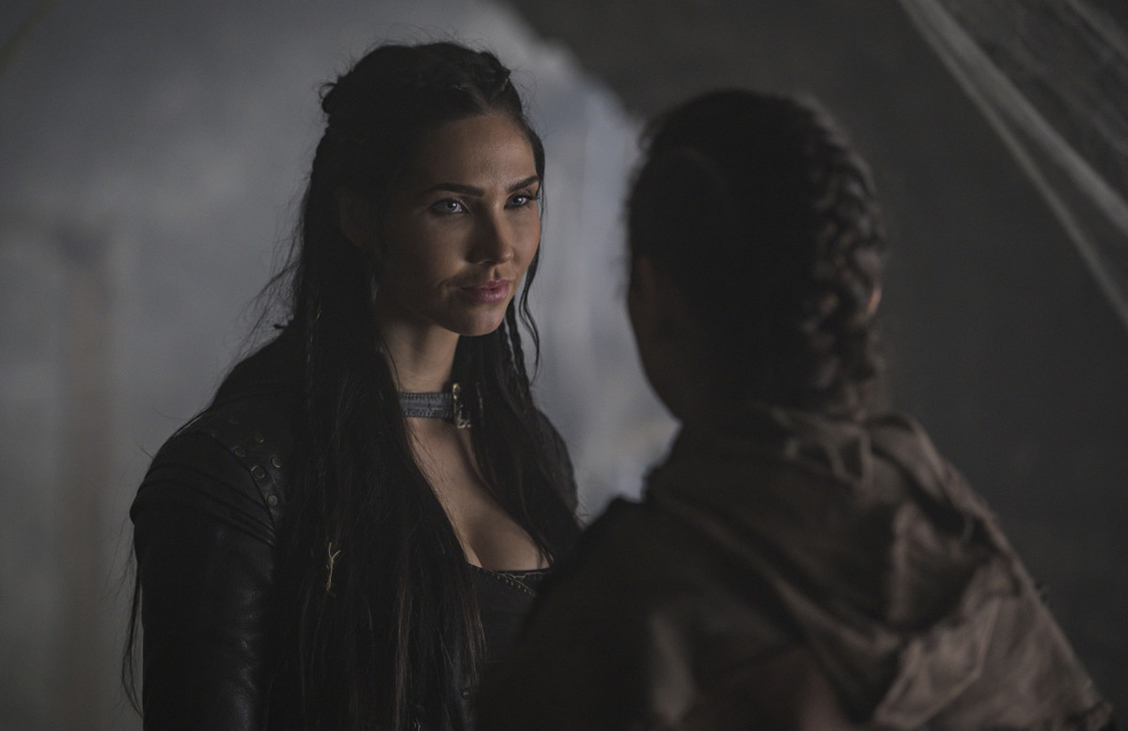 Also of interest was the notion of the pure Blackblood bloodline. Zed was on about that with Talon and Nedra was bugging Wren about it since both are involved with humans. It’s an interesting argument given the decimation of the Blackblood race, but I’m not really sure why Wren was taking Nedra’s crap about it early on. I was glad to see her put her High Priestess foot down and lay out just how valuable all children were in the Outpost. I felt she was kind of wishy-washy about it early, but came back like a boss in the end. How’d the taste, Nedra?

Zed was working the same line of thinking on Talon during their time in the cage on the way to the capital and you could tell it impacted her. I think Zed likes to play the mischief-maker a bit as he later dropped a wry smile at an awkward moment. This all takes us to the eventual rescue of Zed and Talon by Luna (she’s everywhere) and Garret and a meeting with Tobin after the escape. Oh, good for Tobin being dialed into his Kinj so well. He was orbing all over the place like he knew what he was doing. We’ll get back to Tobin in a bit, but first I want to focus on Garret and Talon. There’s been a hue and cry for more “Garron” action in the series thus far. Well, we got it, but it was tense and very “friend zone” feeling. 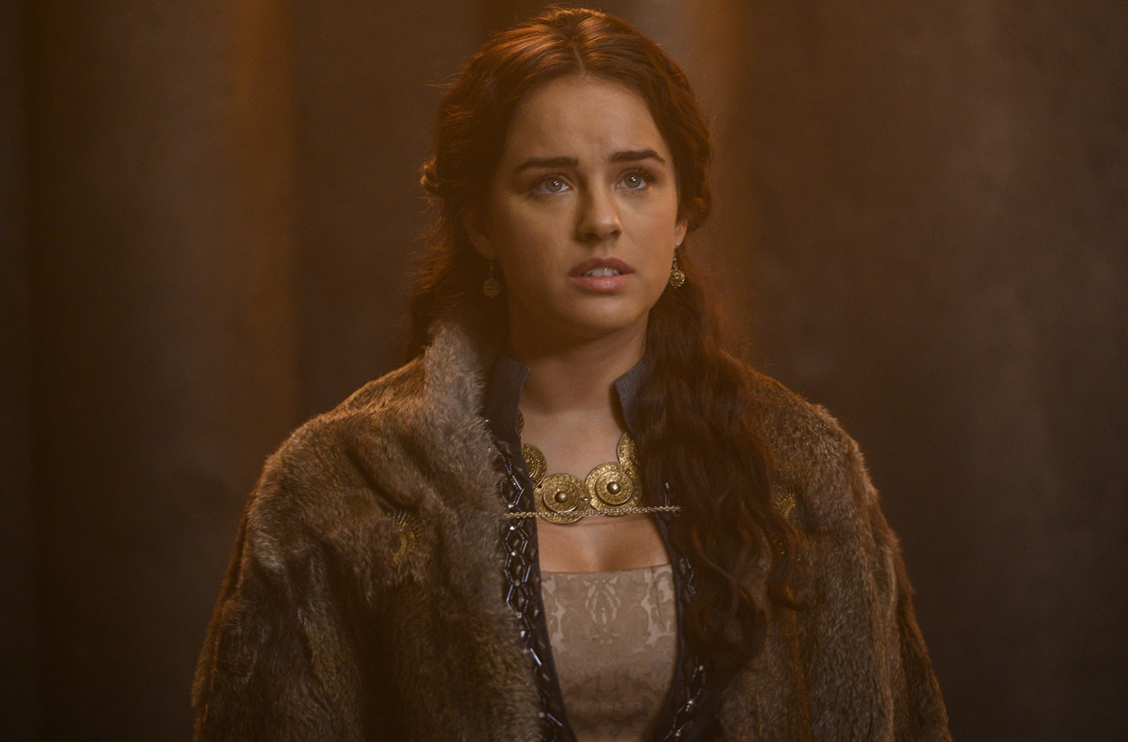 With Talon and Luna off to the Dragman monastery, and Zed and Garret headed back to the Outpost to report on what’s transpired, there was a moment there that really kind of sucked for Garret. After he utters the immortal line and title of this episode, “All we do is say goodbye,” to Talon, he goes in for a smooch. And that’s when it happens. Talon turns her head away and Garret’s unchapped lips fall on her cheek. Garret was denied, people! And I’m none too happy about that. I mean the guy has been through so much, and Talon just got through telling Zed that she was “with Garret.” And yet, at that tender moment when Garret wanted to express his love and devotion, she opens the door to the friend zone cafe and pushes our hero through the doors. this will not stand! I demand a lip-lock from these two soon!! So let it be written (and it is), so let it be done!

The suffering of Garret Spears seems to know no limitations. And Zed is standing there, smirking like the proverbial Chesire Cat, then utters the episode’s best line, “Maybe it’s your breath?” Oh, talk about a dagger thrust into the beating heart of love. Zed, you incorrigible Blackblood, do you really enjoy stirring up a little distraction between our lovebirds? I know some fans who aren’t going to take kindly to you meddling in the affairs of “Garron.” But that’s how we left it and I was in dismay for Garret. Just one kiss from his lover and — DENIED!! Holy puckered lips, Batman. 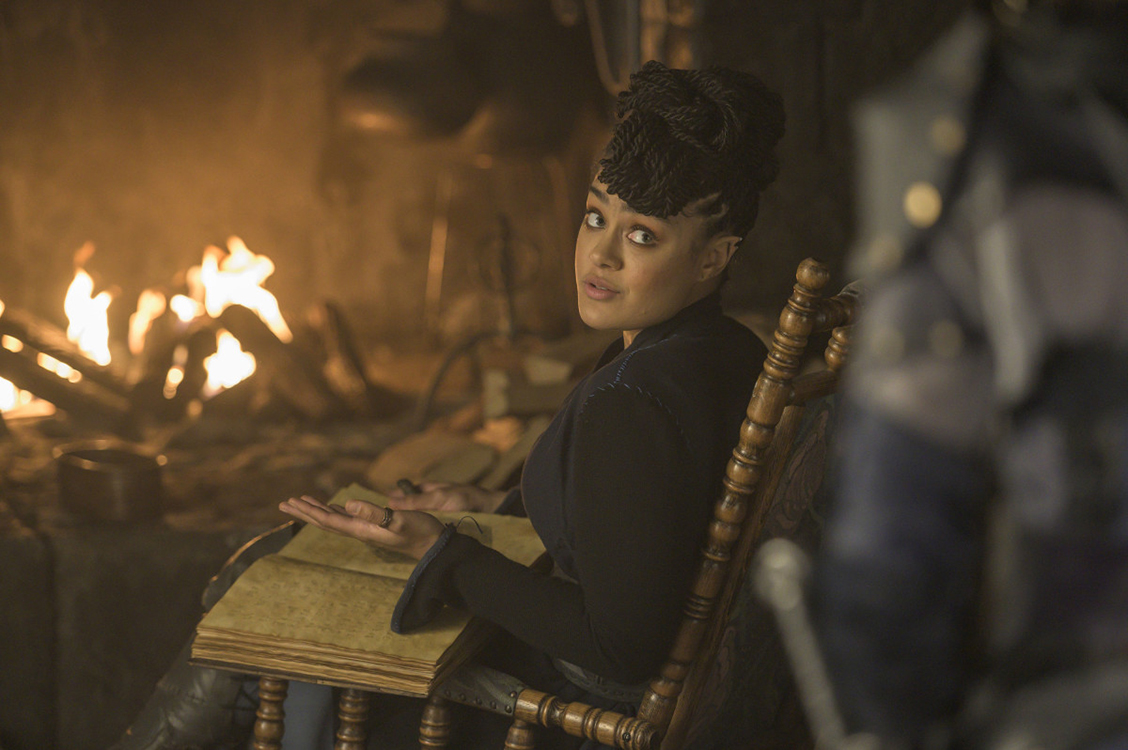 Luna and Talon return to the monastery, a place that clearly impacts Luna deeply. So much so that she breaks into tears at the remembrance of the slaughter there. Talon and Luna are cut from the same cloth, so to see Luna break down — is that a break through of sorts? We shall see if they can divine a clue as to the whole Skevikor mystery. And with that, Tobin and Falista, who continues to be delusional even as she’s stepping over the bodies of the dead in the capital, kneel before Tera, Vorta and Janya in anticipation of giving up their Kinj. It’s interesting that Tobin has seen it through this far. He admits to Garret during their run-in that he knows his wife is not herself and wants only the woman he loves back. But he’s going to make this journey with her no matter where it might lead.

Again, he and Garret have a nice moment when Tobin tells him that he trusts him and gives him his signet ring to rule the Outpost until, or if, they return. Tobin, despite the drunken, lazy and immature lump we saw so many episodes ago, has a long streak of loyalty and honor within him. He has come a long, long way. I think he’s thinking that if possible, he can save Falista from herself. Well, he’s going to get his chance as The Three seem to be lining up for a bit of Kinj release party. Let’s hope Falista and Tobin have better luck than Two did. 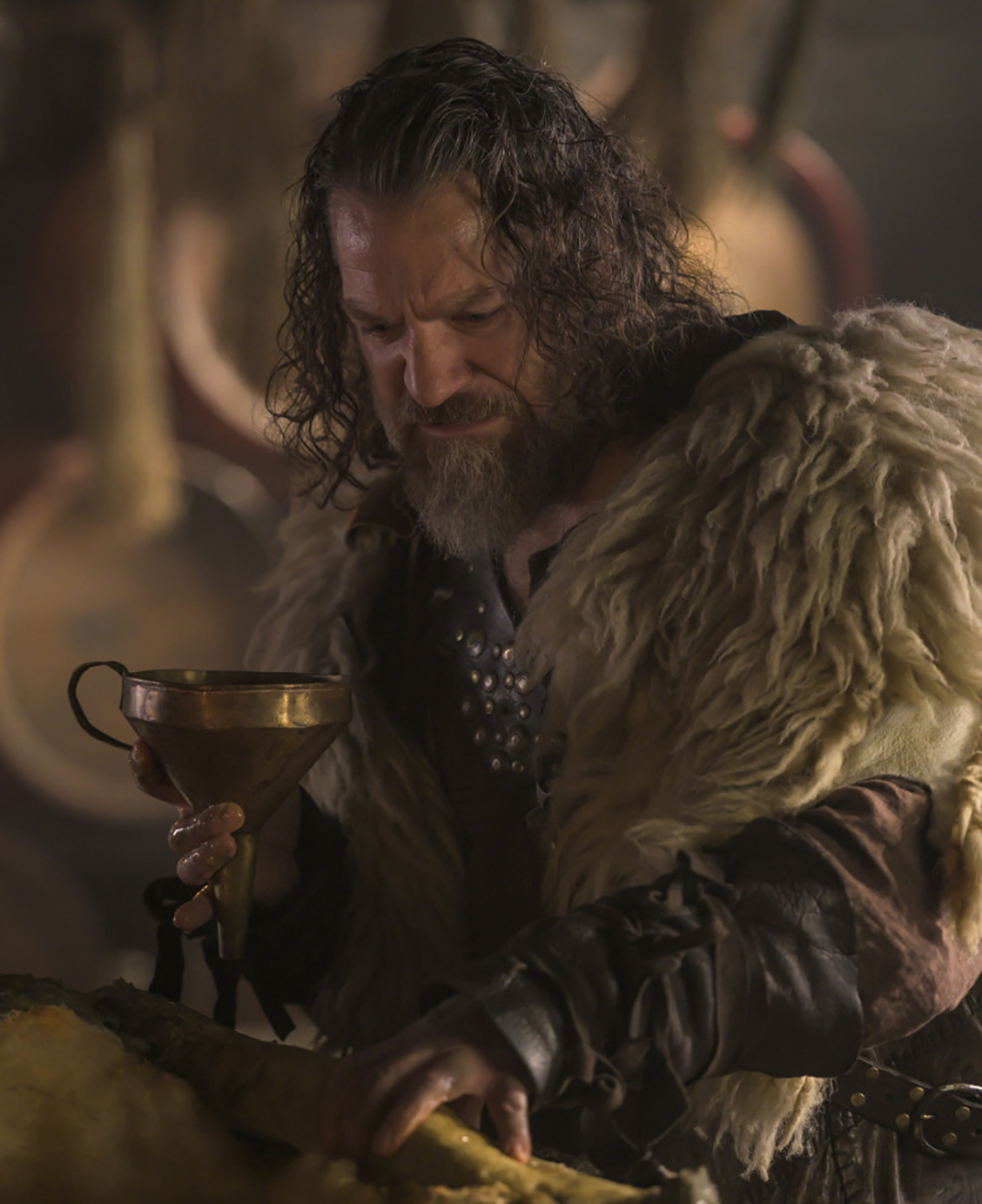 Once again, congrats to Immy Waterhouse for her directorial skills. Episode 6 was another solid and interesting episode that pushed the plot further down the line while also giving us more questions. And that’s something this show does so very well – answer a question, then ask two more. I think that’s why at the finish of each episode so many people are hungry for the next so intensely. There are questions to be answered and threads to be pulled together to make a tapestry of — well, we don’t know yet, do we? I think that’s a wonderfully resonant mystery that keeps us coming back. So far in six episodes, I haven’t seen a stinker yet.