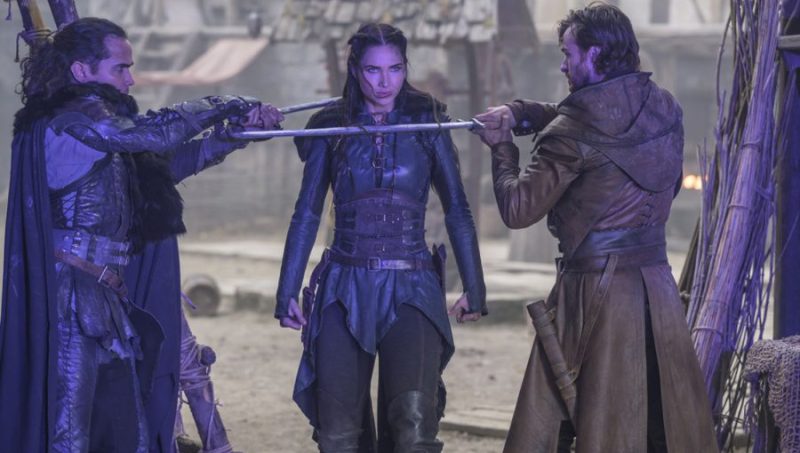 It’s hard to believe it’s over. After four seasons and 49 episodes of homemade fantasy-adventure goodness, The Outpost has aired its final episode. Oh, the cast and crew have long gone on to other things, having wrapped filming many months ago and most assuredly gotten advance notice that this season was the final one, but we, the fandom, even though we found out a few weeks ago, had to sit, wait and wonder. We couldn’t quite make ourselves go on to other things just yet, eh?

In the final episode, “Nothing Lasts Forever,” the best-laid plans of our heroes and their allies go, as you’d expect, a little wonky. But, in true Outpost fashion, an unexpected helper here, some improvisation there, and the whole darn thing turns out just fine – and produces the moment so many in the fandom has been waiting for. In the end, with the darkest season running us through a gauntlet of tension and struggle, The Outpost produced that bright and warming light that we all needed. And thanks for that. 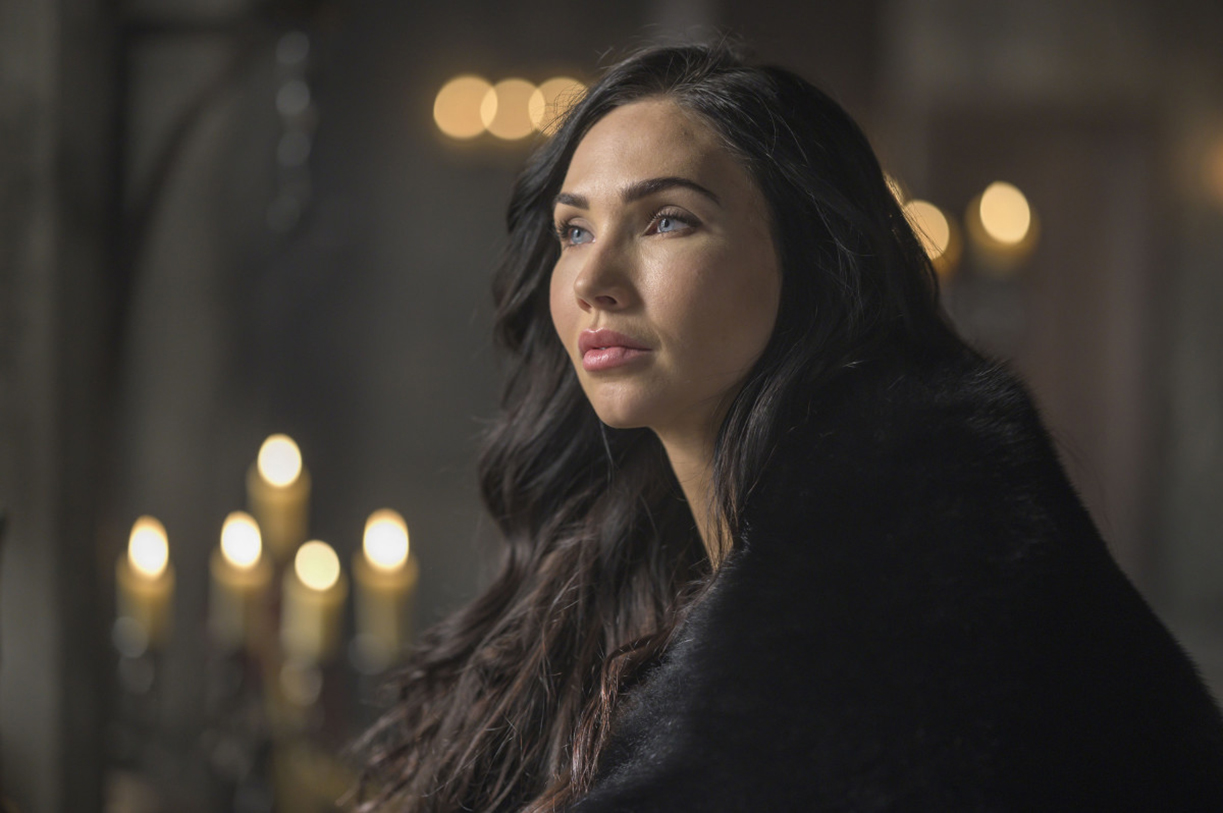 I’m not going to delve into to many “moments” of the finale, as you’ve either seen it or are going to watch it. The Six show up, Aster sacrifices himself, the plan kind of goes off the rails, but our heroes do what they do best – improvise and adapt, and final victory over the Six is achieved. Looks like they didn’t enjoy those icy climes they found themselves in. And yes, love is still in the air. Most of what this episode delivered was kind of what we were waiting for – victory over the baddies, the Kahvi as a freed race, Munt and Warlita the next power couple at The Outpost, Luna proving her worth, and “Garron” making it not only official on the wedding front, but becoming the new king and queen. Zed, of course, just floats in his ultra-cool Zedness, which we love.

I don’t think it’s trite to say we saw most of that coming, though with the way the writers and showrunners have been tossing our emotions about, and killing off characters, I have no doubt there was some nervousness amongst the fandom about how we were going to get there. But as I said, in a splendid little bit of love, The Outpost ended on high note after high note. The good guys won and after so much turmoil and darkness, Talon and Garret will lead humans, Blackbloods and Kahvi into a new era. Truly, a sparkling jewel revealed in the aftermath of so much struggle and uncertainty. Even though it seemed obvious, it was a welcomed high for the show’s conclusion. And I’m good with that. 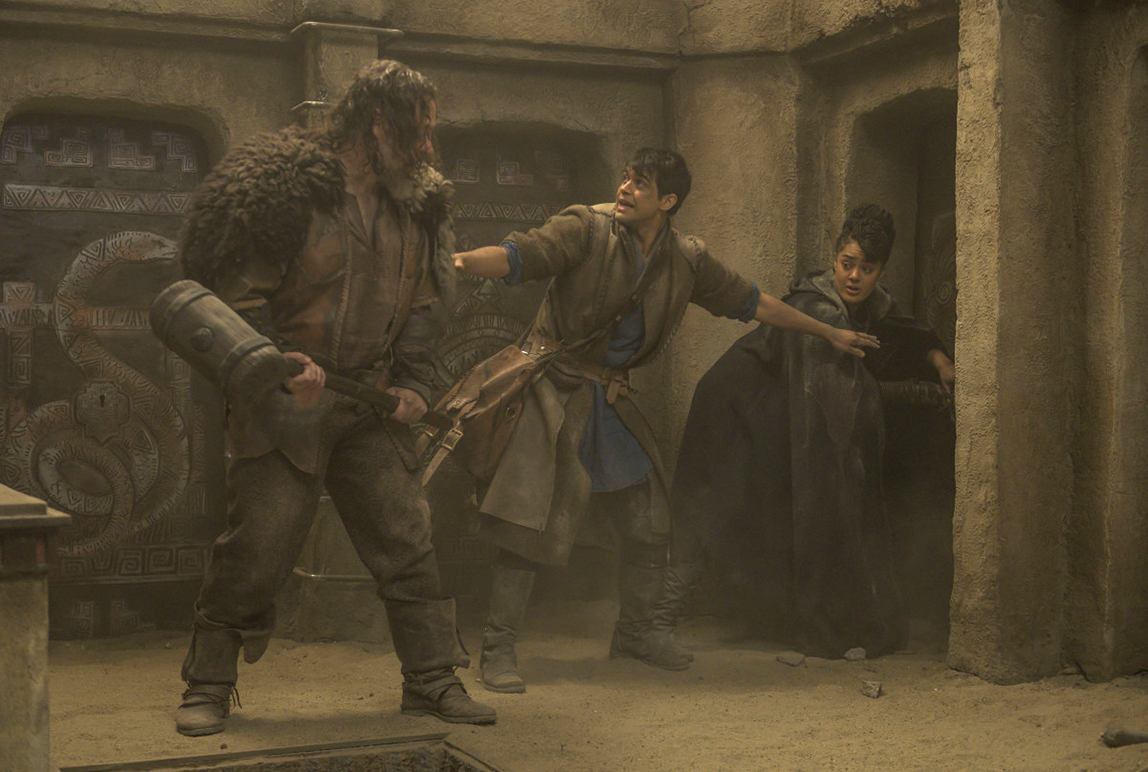 Over the course of this show’s four seasons, I have seen it derided and chastised for its lack of slick production values and computer-generated assistance, it’s rudimentary feel and lack of this and that. I’ve said this before and it’s worth repeating, The Outpost didn’t need the tricks of the CGI trade to make it work. What it needed were characters we could invest in and it provided that. It needed locales that seemed right for the moment and it provided that. It needed writers that could produce a story out of nothing and make us hungry for each coming episode and it did that. It needed directors and a showrunner who poured their resources into having a vision for the show that was attractive and believable and we got that.

I’ve used the word “organic” to describe this show and I think that still fits nicely. The move to Serbia to make the funds go farther was a smart move for the show after season 1 (as was the move to 13 episodes), as was investing in building a real-life Outpost set that lent this show such a period-piece feeling of authenticity. Seeing the potential of Jake Stormoen, Jessica Green, Anand Desai-Barochia, Adam Johnson, Reece Ritchie, Georgia May Foote and others, and letting them really lean into their characters was no small feat as well. Fantasy-adventure done well is a trip to another land, another place mentally. When it’s done well, it is magical. 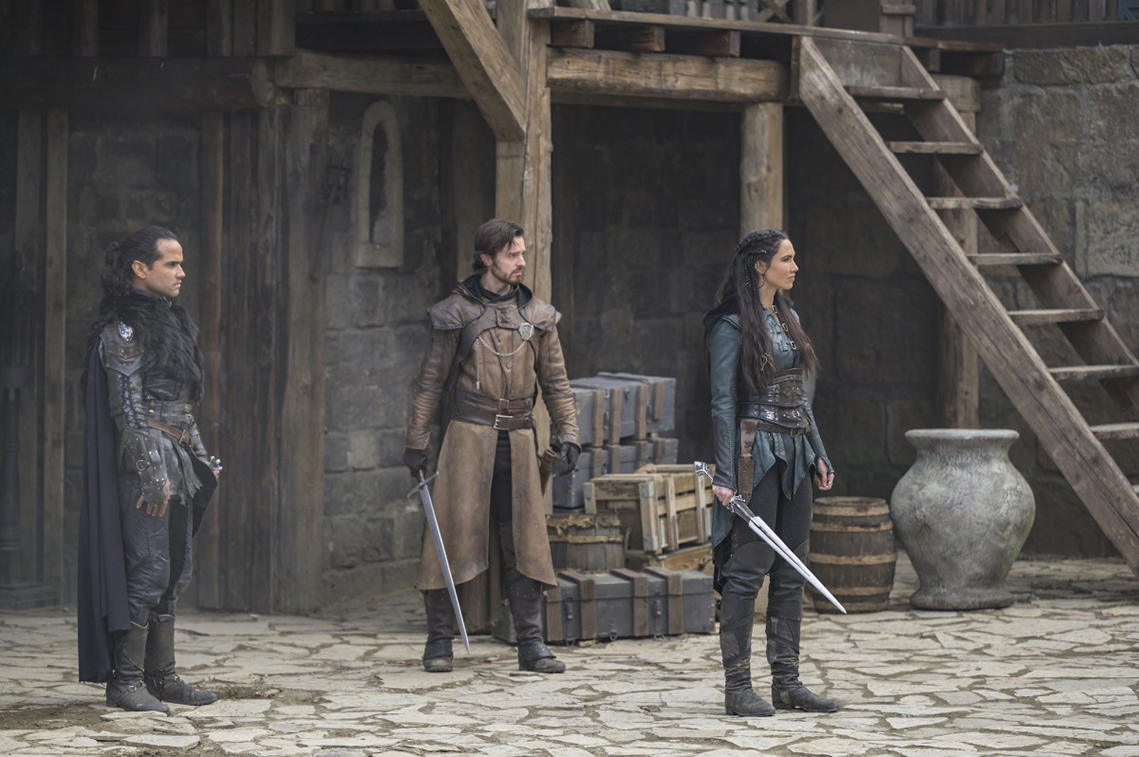 When it isn’t, it can be such a disappointment (See Shannara Chronicles. So much potential, so little return on it). For my money, The Outpost benefitted from being more organic and delivered a magical hour for 49 weeks. And those that bought in and suspended their disbelief, got to see something really wonderful grow before our eyes. How can that be anything but good? So yes, I’m sticking with the word “organic” because that’s how this show felt – it grew from nothing and was nurtured and cared for by writers, actors, directors and others as it grew and matured. And I think I speak for many when I say that this show matured incredibly well.

The path to Talon’s side and the kingship for Garret was a nearly three-season slog through the emotional pain and slop of lost purpose and, perhaps a lost soul for a time. I was so impressed with Jake Stormoen’s work as Garret and how he conveyed, often without words, the turmoil within him. Jess Green, I thought, came so far in terms of her abilities from that first season. She grew and progressed and, yes, matured as an actor right before our eyes and it was marvelous.

Izuka Hoyle, Anand, Adam Johnson, Imogene Waterhouse, Aaron Fontaine, Robyn Malcolm and virtually every new character introduced grew personally and from a story standpoint. I can’t even begin to talk about Reece Ritchie and his talent. He was a joy watch play Zed in all his incarnations – warrior, jokester, snarky, passion, intense, caring and, in the end, heartbroken. I was delighted when he booted one of The Six into the icy void and shouted “that’s for Nedra.” So good. I know within the fandom there was a lot of talk that every new character was a winner – no duds in the cast. 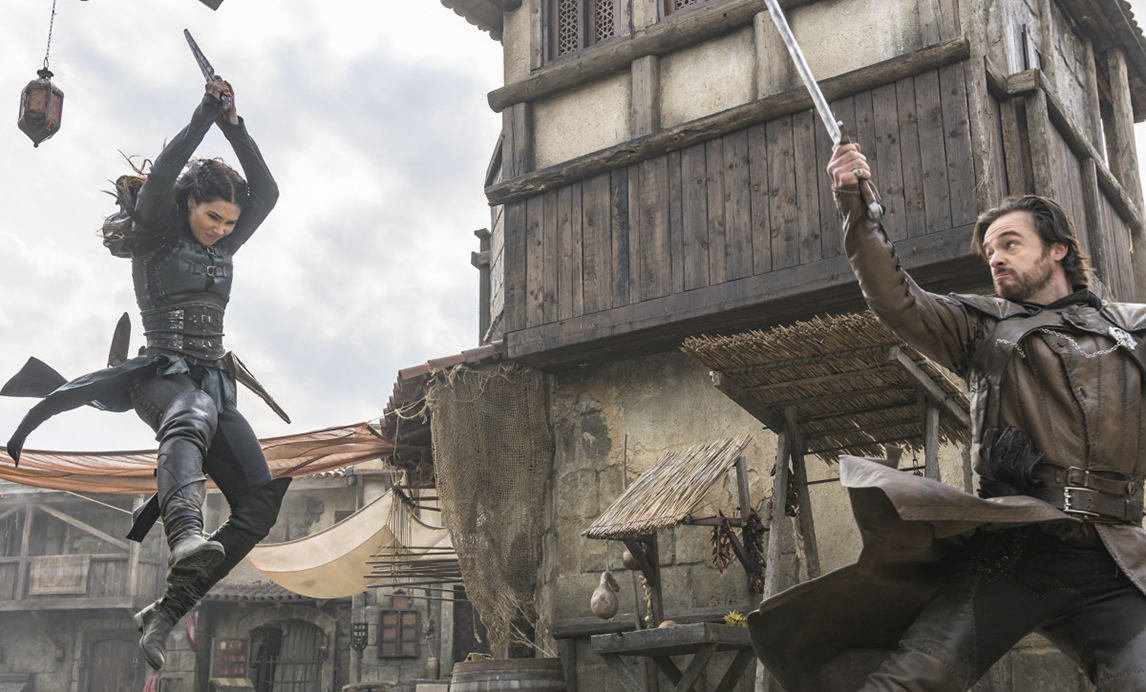 And I agree with that. And any cast member that hung around for a while forged their place within the pantheon of this group and even when they didn’t have much to do, they did it so that it added to the whole. I know that Jessica Green was first on the call sheet, but it’s clear that as this show grew, The Outpost morphed into an ensemble effort. And I think that made it so much more satisfying.

In the finale, most of our main group got to offer some heroic moment, which I found uplifting. Of course Talon, Zed and Garret got to fly around a little bit and give us some sweet swordplay, as well as demonstrate strength and determination, but there were other moments. Luna with the broken ribs and burned hand, tossed a well-timed dagger into the leg of one of the Six, saving Talon’s life and providing a key moment that helped in the overall success.

Wren and Janzo’s determination and passion to save the Kahvi was heroic on many levels, as was Munt, who wielded a mean hammer when it was needed most as the wait for Marvyn to talk the promise of a new day, a new way of life, to his people took some time to arrive. Even the Kahvi’s first few steps into freedom offered a heroic bent as that can’t be easy to do after a lifetime of servitude. There was plenty of heroism going on and the reminder that though we can be different looking, we share so much worth holding onto. 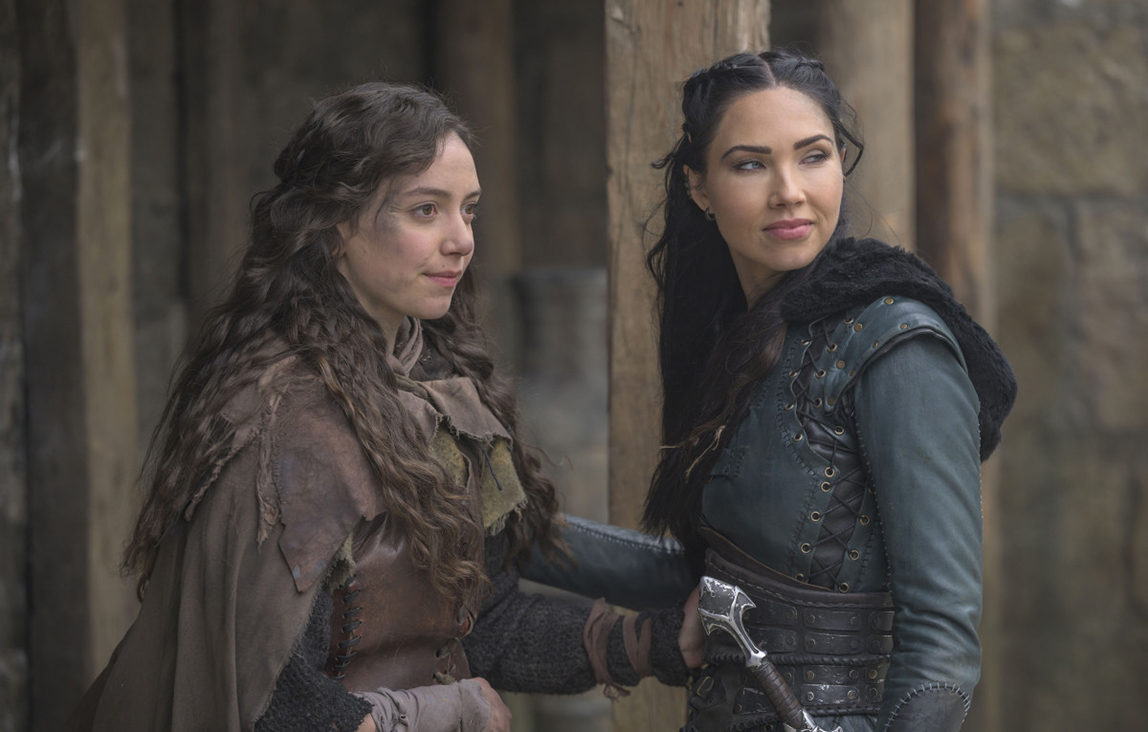 And together, that makes a wonderfully unique and diverse world, a world that Talon and Garret will now take the lead in shaping. How exciting. Of course, Aster’s personal sacrifice was heroic as hell and a classic “The good of the many outweigh the good of the few, or the one” moment. He even came around to seeing the Kahvi as something other than chattel, a reminder that there is hope for unity.

Truthfully, I could go on and on about how much I liked this show, the characters that walked through the Realm and the feel and vibe that were created by all that were involved. But you’re probably of the same mind, so why even go into it. I think The Outpost carved out a very important slot in the fantasy-adventure genre. It can be done successfully and without relying on CGI and other computer effects. It can be created from nothing and it can draw a loyal and passionate fan base.

It can be done because The Outpost did it. And 49 episodes – the equivalent of about five seasons – are nothing to be sneered at. A lot of other sci-fi/fantasy/adventure shows that had more buzz behind them lasted a lot less time. There was something about The Outpost and The CW’s commitment to it that was special. Combined with a committed and passionate fanbase and you get what? TV entertainment magic. There’s a lesson to be learned here by TV execs. I hope some were paying attention. 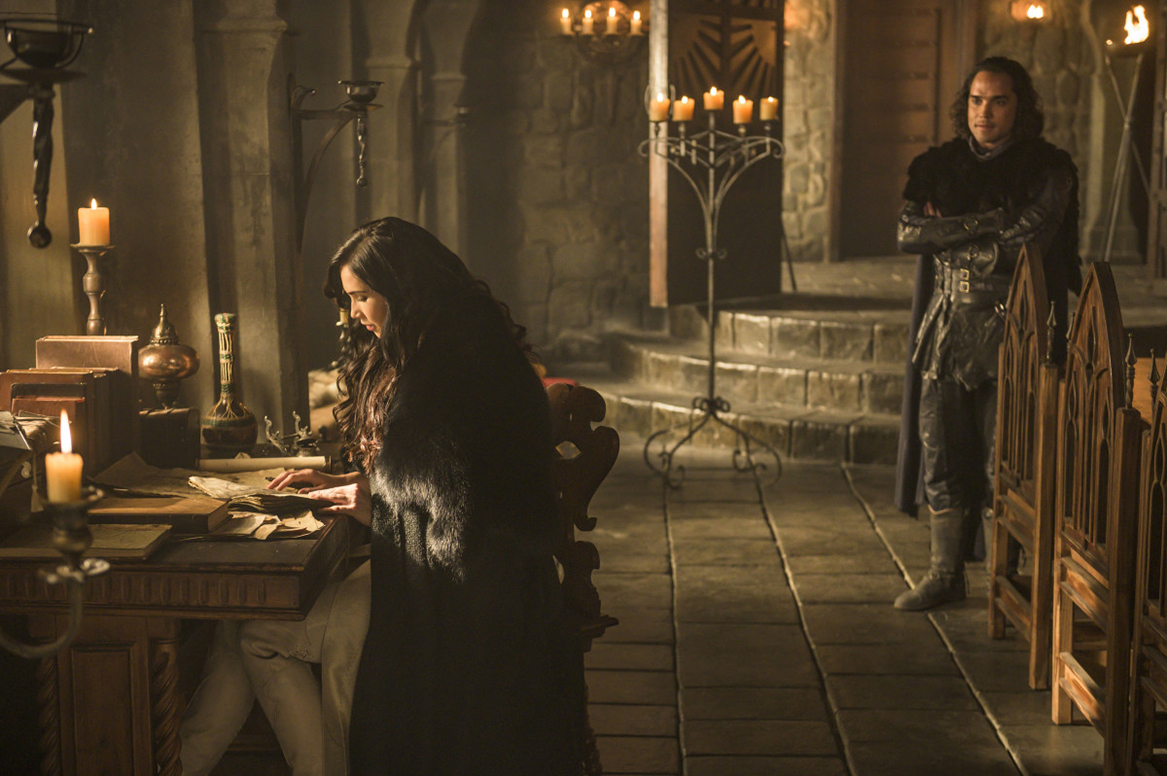 And now we are done. That’s it. The only thing to do is to sit down, take a deep breath and got back to season 1 and start a rewatch. I’ve started that recently and it’s fascinating to see season 1 on the heels of season 4 and note the differences and the huge strides this show made in those seasons. It kind of lets you know that the love developed for The Outpost was legitimate and true. And that’s not fantasy.

Stop by The Outpost Calling radio show this Sunday, Oct. 10, at 2 pm (PT) to talk the finale and the show as a whole. What will you remember and cherish about this show. https://www.threeifbyspace.net/three-if-by-space-live-radio/