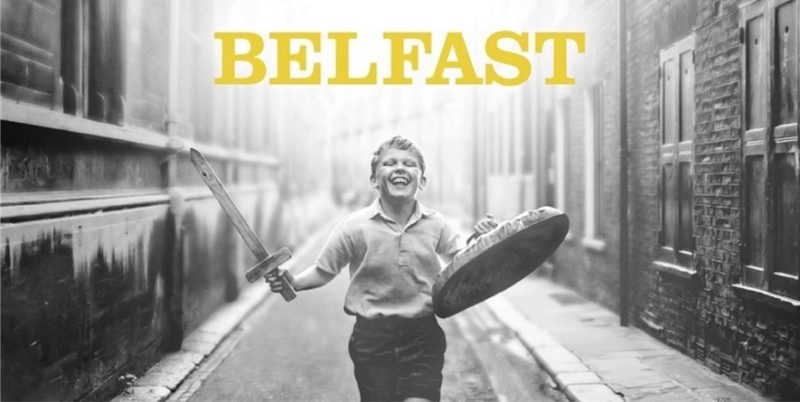 In the summer of 1969, violence came to the streets of Belfast. It wasn’t the first time, and surely wouldn’t be the last. But it became the backdrop to the lives of working people, people for whom these streets were home. One of those was a very young Kenneth Branagh, who recently took the lull in work he found during Covid to put his memories of his childhood into an amazing new film, Belfast.

What makes an impression on a child? How accurate or impartial are their memories? Family, certainly, and the traumas, big and small, all seem to have about the same weight, and are front and center. In Belfast, we have all of that, through Buddy (played by Jude Hill) – his parents’ reaction to bombings outside their door; his brother, who gets caught up in the gangs that rove the streets; the grandparents who loved him; his reluctance to steal from a local grocer. But we also see the times from the other side, and that’s just as fascinating. Buddy’s parents, played by Caitriona Balfe in a luminous performance, and Jamie Dornan, strikingly solid and attractive, are dealing with a marriage shaken by an out-of-town job, changing times, and financial pressures. In a child-centered film, we rarely get to see the honesty Branagh brings to this world. 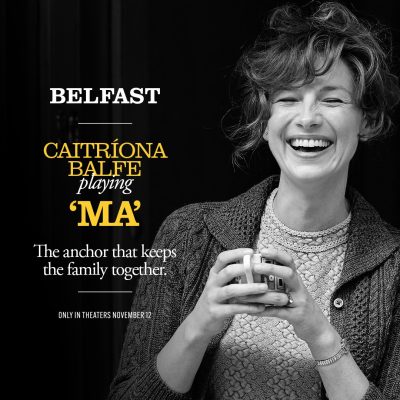 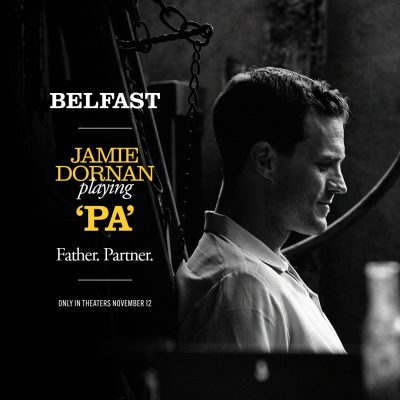 Ma and Pa (the parents have no other names in the film, appropriate as young children really only know them this way) are wonderfully done by Balfe and Dornan. Their concern for their children, fears for their relationship, and worries about whether a move would hurt or help the family, are so honestly done that it almost feels like we, the audience, are peeking through the windows at a real conversation. While it’s very obvious they love each other, especially during a breathtaking scene where the family goes to a neighborhood dance, sometimes love is not enough. And these parents are teetering on that point, as many of us have during long-term marriages. Their fears felt very real and immediate. There’s already a lot of “Oscar buzz” for Belfast, including best picture, and for Caitriona. Us Outlander fans would certainly support the recognition – she’s beginning to truly come into roles that recognize her as a major talent. 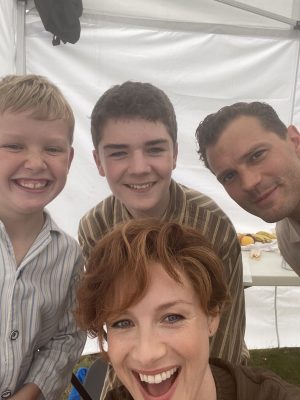 Despite British troops outside their door, and the Protestant vs Catholic sentiment that fueled some of the violence, Buddy is more concerned with immediate issues. There’s a girl at school he likes, and she’s JUST this much better than he is (and Catholic to boot), so to sit next to her, he has to work harder on his homework and get better scores on his weekly tests. His father works “across the water” for two weeks at a time, only coming home every other weekend. The larger worries of the world are, most of the time, a bit removed and exciting to a child, and Branagh does a wonderful job of keeping this in perspective. We see the adult side – Ma, scared by a particularly violent event, running into the street to grab Buddy and rush him home, Pa threatening a young organizer if he tries to recruit Buddy and his brother. 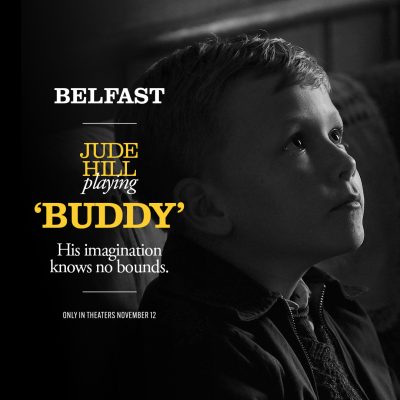 The other major force in Buddy’s life are his paternal grandparents, played wonderfully by Ciarán Hinds and Judi Dench. Despite being supporting players in this cast, they’re fully realized and fleshed out characters. “Pop” is the local tinker, repairing and storing all manner of things; Granny is beginning to be a bit lost to dementia, but still has a sweet smile and her husband’s complete love and devotion. I grew up with Irish grandparents much like this – they loved us grandchildren fiercely, and each other even more. These two made me cry! Pop has his own personal struggle, that profoundly affects the rest of the family, just as my grandfather had. Mine have been gone for many years, but Hinds and Dench made me feel again like a young child who could do no wrong in their eyes. 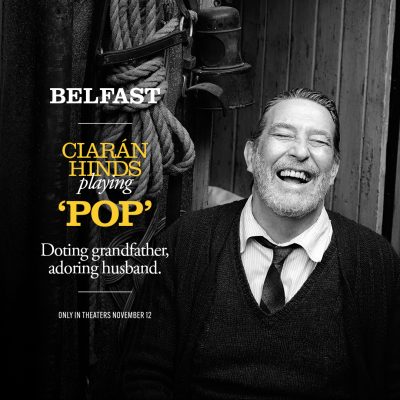 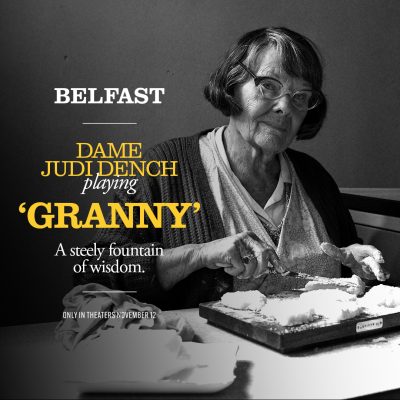 One of my favorite scenes (clip from Fandango) was following the family’s Christmas celebration. Stuffed with treats and presents, but shaken and upset by Ma and Pa telling them that the family would soon be moving away from Belfast, the children have fallen asleep under the tree. Ma and Pa discuss the future of the family, and their marriage, in hushed tones. Caitriona Balfe, talking about this scene, said that the boys had actually fallen asleep, and she could hear a bit of snoring as they filmed, lending an air of realism to their work. Again, the honesty of both the writing and the performances was  striking. Balfe, as Outlander fans know, inhabits her roles, and it’s hard to see where the character ends and the actress begins.

“You raised them. Not me.”
Jamie Dornan and Caitriona Balfe star in Kenneth Branagh’s #Belfast.
In theaters now: https://t.co/pk2LppUtY3 pic.twitter.com/hga3r1hTXJ

I was lucky enough to see this at the Chicago Film Festival, before general release, where Branagh was being given a Lifetime Achievement Award. He stayed after the showing to discuss the film. It was filmed primarily in black and white, as our memories tend to be, he said, with scenes in color from the movies his family loved to go to, including Chitty Chitty Bang Bang. He remembers his parents as “glamorous,” and cast Balfe and Dornan in part because of their own glamour. I can’t disagree with that at all! The film was put together quickly – written during the world lockdown due to Covid, then filmed through an independent studio. But a film like this takes a lifetime to put together – and it’s obvious that while it may have only gone on paper last year, it’s been brewing in Branagh’s head for many years. 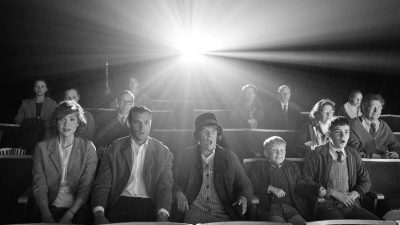 The film also showed at the Santa Barbara International Film Festival last week. Branagh, Balfe, Hinds, and Jude Hill all discussed their own lives in Ireland. I was fascinated to learn that Hinds, who is Catholic, and Branagh, who is Protestant, grew up half a mile from each other – but were required to go to separate schools because of their religions. Now, Hinds says, there is a movement for integrated education, which will hopefully have an effect on the ongoing tension between the two groups (the conflict is larger than religion – it has more to do with who governs, Britain or a free Irish state, but religion is a major component). Watch the entire panel here.

The soundtrack to this film is a gem. Heavy on Van Morrison – “The Belfast Cowboy” – and the excellent music of the late ’60s, it evoked all the memories those of us who are Branagh’s age will have of this time.

Sir Kenneth Branagh has had a truly varied career – formally trained as a Shakespearean actor, he also made a wickedly funny turn as Gilderoy Lockhart in the second installment of the Harry Potter films. He has long been recognized as one of our generation’s great actors and directors, so it’s no surprise that he’s using those talents to bring a film that’s beautifully written and directed. Listen to Kenneth Branagh discuss the film in EW’s podcast The Awardist  (skip to 15:20). And learn more about Belfast and Northern Ireland’s historic conflict here.