Last December, I was asked to help out with the Thru the Stones convention in Iowa by leading the on-stage chat with Outlander’s stunt coordinator and horsemaster Dom Preece. He was funny and knowledgeable, happy to dish about actors’ abilities (or not), and we had fun with the audience throughout our hour and a half discussion.

Dom has been the show’s stunt coordinator and horsemaster from the beginning. He has a great pedigree himself – he’s worked on some of the major film franchises, including Bond films, Harry Potter and more. He recently worked on season 2 of the Amazon Prime original series Good Omens (one of my FAVORITES), and has returned to Outlander for seasons 6 and 7. 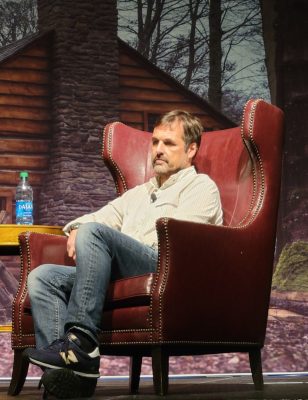 Deb Ford, who runs the excellent Thru the Stones events, has asked me to help with previous events – I’ve written the introductions for many past guests, and in 2018, wrote and gave an appreciation speech to Terry Dresbach on her retirement from the show (her second time  as a guest to TTS, and in 2018, she brought Ron Moore with her). Last year, Deb asked me to take this job – interview a man who has stayed behind the scenes for the vast majority of his career, so there was little background info available on him. Fortunately, I caught him in a hallway earlier in the day before we were supposed to be on stage, and we had an hour to do some interview prep – figure out what, if anything, was off limits, go over some questions so he could prepare answers, and plan a bit of audience participation. I know nothing about horses! Besides having a fascinating job, he’s kind, funny, and very good looking! All of this made my assignment quite easy. It was definitely a highlight of my own attendance at Thru the Stones. 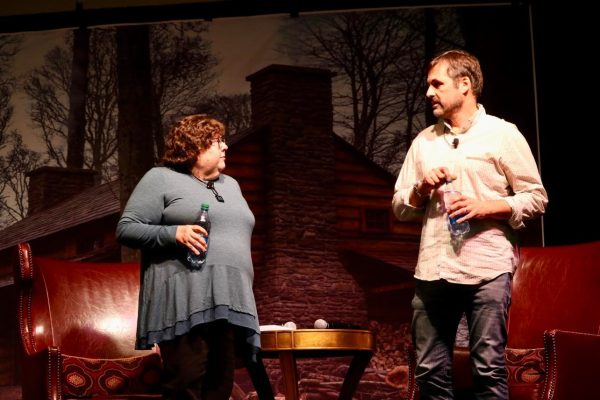 Deb is starting to get video from last year’s event, and loading it onto her new YouTube channel. This is one of the first pieces she’s put on the channel, and she gave me permission to bring it to you!

Subscribe to Deb’s YouTube channel – the other guest from last year was Chris Donald, who played Philip Wylie, and his chat with us (hosted by Julie Terstriep). That one is definitely worth watching, to learn about this dedicated and talented young actor. Click here for that video.

Listen to The Outlander Gab – internet radio – every Tuesday during the Outlander season
9 pm eastern/8 central/6 pacific on blogtalkradio.com/threeifbyspace