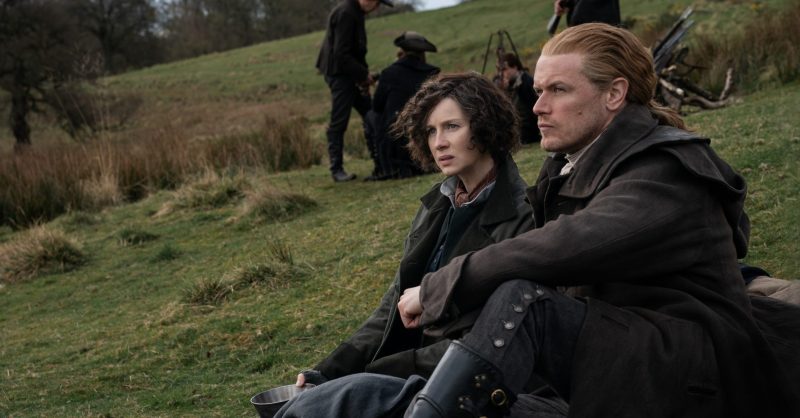 One of the best things in this episode was the renewed intimacy, in emotional terms, between Jamie and Claire. They’re never too far from each other, but her ether use (a storyline I understood but absolutely didn’t like) was an unseen wedge between them. Claire had a secret, and she wasn’t honest with Jamie for a very long time – in a marriage where they had pledged honesty. But the weight of the attack at the end of Season 5 was HUGE, and right or wrong – and there never really is a right or wrong in the way a person grieves and recovers – she kept Jamie in the dark about her ability to cope. Once that secret came out, as a result of Malva’s murder, they were able to come together again in a healthy way. And she needs that  now – she needs Jamie’s strength and support, in every way, not just around the fringes. Of course he gives it to her unreservedly, as he always has, with “the protection of my body,” another pledge since the beginning of their marriage. 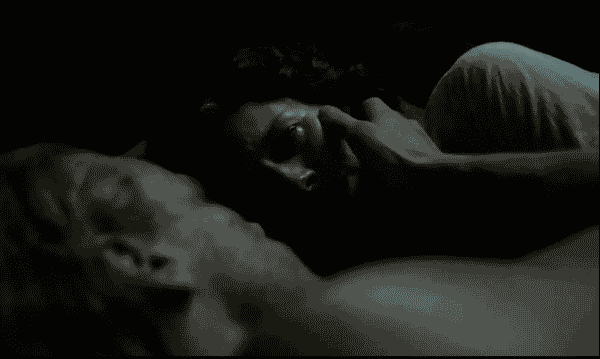 Just to get it out of the way – did they really think a shootout had a chance of success? Holed up in the house, with a finite supply of guns and ammo, no safe access to additional food and water, no way to get to some kind of transportation out, and an enemy that they could only hope would get bored and leave? When does a shootout EVER work, unless you’re in a Fast & Furious movie, where speedy cars and bulletproof trucks are at hand? No matter how many friendly faces could be counted on to show up, Jamie had to know, or quickly understand, that even if the Brown committee of safety, and then the fisher community, could be defeated, they couldn’t continue to live on the Ridge if they had a shootout and killed some of the crowd. This was an illogical choice, done because it made for great drama. Of course, most television requires some suspension of disbelief, and it was truly tested here.

So it comes as a relief when the suggestion is made for Jamie to go with Claire, to ensure her safety – why this smart man didn’t come up with this idea himself… 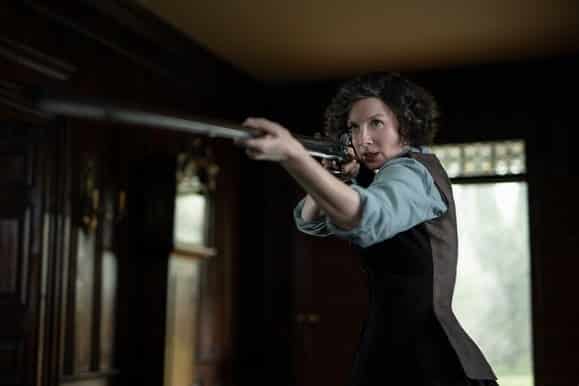 The first time I watched this episode, I was completely thrown by the opening credits scene of the diner. I think it took me two more viewings to understand that this was probably from Claire’s memory of her meals at Carmi’s diner with Bree – which she mentions when she and Jamie talk about a “last meal.” But I felt that it was clunky and obscure, unlike some of the lovely little moments from other episodes. Having Claire in a red dress calls back to the finale of Season 5, the “Never My Love” sequence, where she disassociates from the trauma she was experiencing, wearing a red dress as she walks through the modern home This episode, too, is a major trauma, and while she doesn’t mentally leave the scene, I appreciate the continuity of her self-protection. 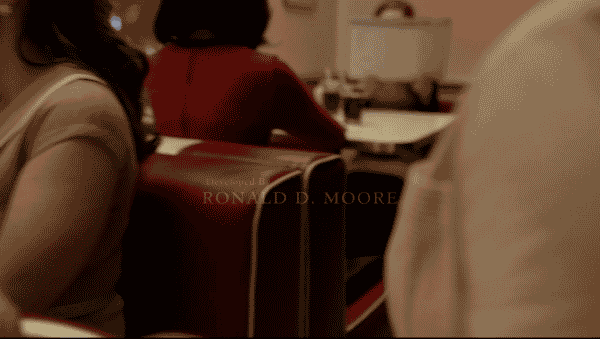 Jamie’s “nope” to Richard Brown, as Brown stands in the yard, hat in hand – “Look, we ain’t gonna hurt her. We only mean to take her to Salsbury, the court there, she’ll get a fair trial. That’s the law ain’t it?” Brown yells. And Jamie’s response is a little more pointed – a shot through the hat. “If I wanted ye dead, ye’d be coolin’ right now,” he retorts. Nice shooting! 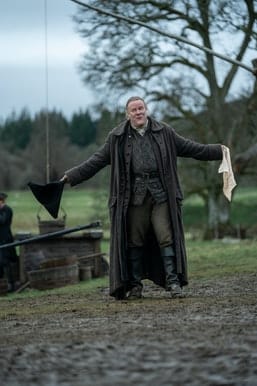 Nine lives – were you counting on your fingers? What did they miss? For sure, they missed Dougal hitting Jamie in the head with an axe (before Outlander starts, but Jamie tells Claire about it). The near-death experiences listed were 1) when Jamie recovers at the abbey (we’ll roll that into the attack by BJR at Wentworth); 2) after Culloden; 3) being shot by Laoghaire; 4) snake bite; 5) nearly freezing to death when his back went out. Were there any others (to this point, not later)? 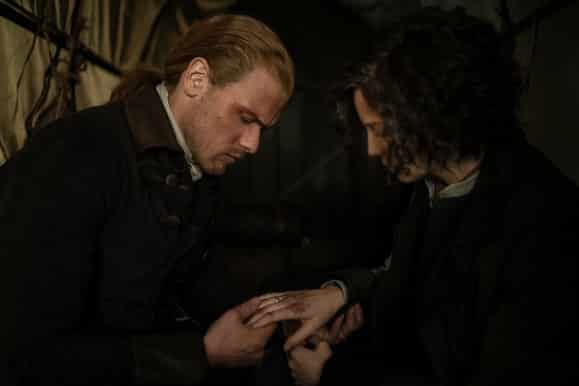 Roger, Brianna, Jemmy and the Harry Potter tent – did that tent seem awfully big to anyone else? Not having any kind of background myself to know if that was typical or Hollywood, it reminded me a lot of the Big House, in that it was a bit over the top. And I’m not sure why, but R&B lovemaking scenes make me uncomfortable. Jemmy’s lice made me itchy too – but I loved the sweetness of Jemmy “talking to the baby.” Kind of hints at the closeness he and his sister will share later on. And I’m happy for Roger that the parentage issue is settled. 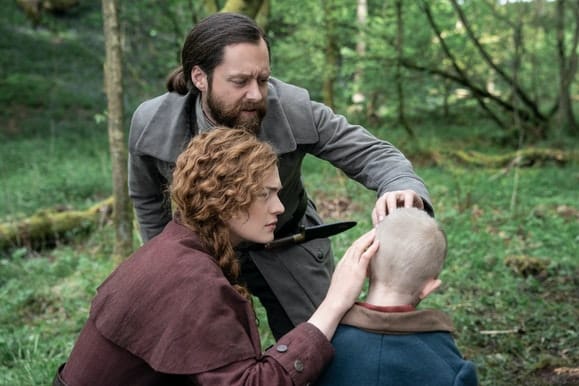 The time travel discussion between Roger and Bree was sweet, too. Trying to figure out when to tell children a big secret like this is tough. At what point can you trust them to not tell other people? Probably never. But can you really keep something like this from them?

The lovemaking scene between Jamie and Claire was uncomfortable for another reason. Yes, it was very emotional, showing their love in the way they know best. But the actual filming felt forced and clunky. I certainly don’t expect the unrestrained joy of season 1 – both characters are in a completely different place emotionally right now, and there was so much sadness in the scene. But repetitive shots made the scene feel forced and more “viewer service” than organic. Of course, I understand the difficulties – Caitriona’s pregnancy, covid restrictions…. but if you can’t do it well, don’t do it.

Yeah, I don’t like Mrs. Bug either. Or her sister-in-attitude, the Wicked Witch of the East. Which is a shame, because in the books, until she’s bad, she’s very very good. 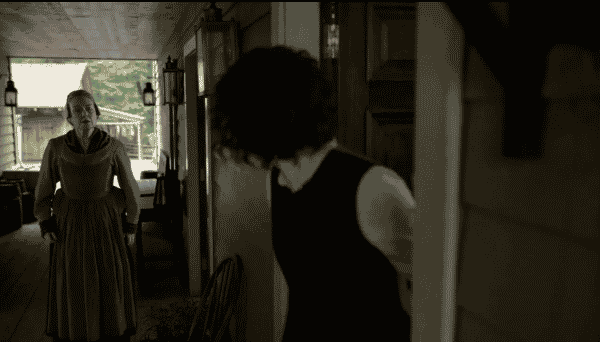 Young Ian to the rescue! I could feel Jamie’s surprise when Ian steps out from the shadows. And when Ian and the Indians literally ride to the rescue, I could hear you all cheering! (Well, maybe not, because I was cheering really loud too.) Chief Bird has become a great shot, hasn’t he?

However – are we setting up for a diversion from the book? I’m not saying good or bad, but it’s possible that season 7, currently being filmed, may eliminate some of the next part of the story. Avert your eyes if you haven’t read this far – at this point, Claire is in the jail for a while, then with the help of another inmate who “switches” crimes with her, she moves to another location – and Jamie doesn’t know where she’s gone, either the Wilmington jail or the other location. Now, we have seen ships being used for filming – the assumption is that they’re for a different story line, but I guess we’ll have to wait and see! 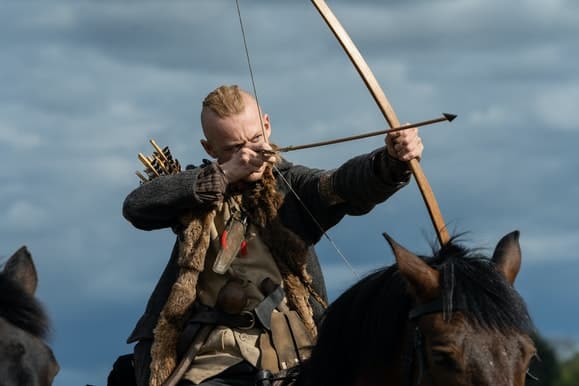 By far, my favorite moment from this episode is one with no lines, where Jamie realizes that Tom Christie is in love with Claire. What else could that naked, hungry, sad, defeated stare be? A woman with integrity, deep compassion, intelligence, devotion, beauty – and she’s completely out of reach for him. He must know by this point that there’s no way she could have killed Malva, but perhaps doesn’t know who the real killer was. And his earlier disregard for Jamie has become respect, increased by the way Jamie handled the accusation and subsequent murder. Tom knows he can’t stop what’s happening at this point; he believes the best he can do for this woman is to make sure that nobody lays a hand on her, watch over her and protect her from the mob. He has to leave the majority of protection to Jamie, but he’ll do what he can, through his grief, exhaustion, and longing. Both Sam Heughan and Mark Lewis Jones brought everything to this scene, and without a word, bared their souls. 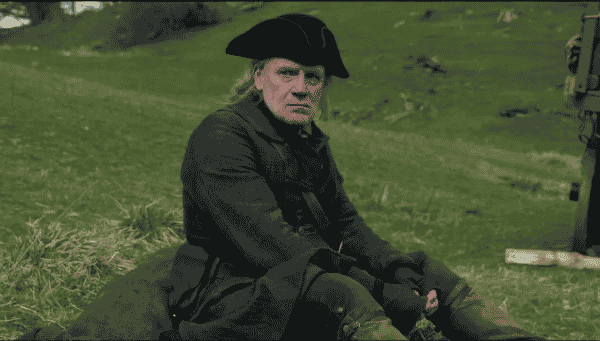 Overall, I felt that this season was one of the best the show has done, with consistently high-quality performances, excellent writing and direction, and a thorough understanding of the characters and the essential nature of Diana’s books coming through. Despite some very large obstacles, our cast and crew continue to make one of the best shows on television. I really appreciate all of the videos and photos, the cast conversations and videos, Matt Roberts’ insights, Sam’s interaction with fans through Outlander, MIK, and all of his various business enterprises, and the opportunity to meet so many cast members through Twitter, Instagram, and all of the fan events. Personally, I love hearing everyone’s opinions, whether they agree with mine or not, and I hope you’ll leave a comment below about your feelings on Season 6!

Join us tonight, Tuesday, on Instagram for our final Outlander Gab on  the Air for this season! 9 pm eastern/8 central/6 pacific – look for me, erincon1959; SamKraupner; or KokoGadget! Chat with us on camera about the episode, this season, Koko’s birthday, and more! 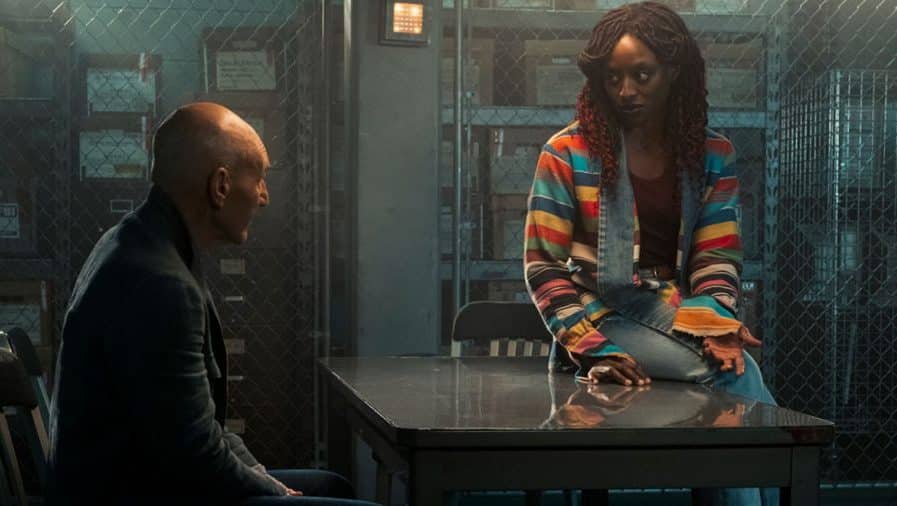