A cautionary tale that follows a family as it struggles to reunite after falling apart. THE SON centers on Peter (Hugh Jackman), whose hectic life with his infant and new partner Beth (Vanessa Kirby) is upended when his ex-wife Kate (Laura Dern) appears at his door to discuss their son Nicholas (Zen McGrath), who is now a teenager. The young man has been missing school for months and is deeply troubled.

Peter strives to take care of Nicholas as he would have wanted his own father (Anthony Hopkins) to have taken care of him while juggling his and Beth’s new son, and at work an offer of a dream position in Washington. However, by reaching for the past to correct its mistakes, he loses sight of how to hold onto Nicholas in the present.

Florian Zeller’s “The Son” deals with the very real and very serious topic of depression and suicide. The director clearly is aware of the gravity of the topic and takes it seriously as he navigations the story through the focal point of the son, Nicholas. His father (Jackman) has remarried and has a new baby son and is a workaholic. His mother (Dern) was crushed by their separation and is a workaholic as well. At the center is Nicholas. He feels lost, alone, and unsure of what to do.

The writing for this film feels uneven and at points inauthentic in its portrayal of how everyone is dealing with his son’s cries for help. In a way that unauthentic feeling is our minds trying to justify that it’s the story and not the reality of human nature that the world just doesn’t care enough to be authentic. The film is at its best when Peter (Jackman) and Nicholas (McGrath) are together, but what little time we spend with Nicholas when he is at his lowest moments leaves holes in the film’s emotional drive forward.

Nicholas suffers off-screen and we are left to wonder just what was bothering him. This directorial choice was intentional as Zeller tries to visually show us how those suffering from depression often find themselves experts at hiding or explaining away their feelings and actions. The film reaches its most searing moments with scenes of pure emotional rage as father and son try to wrap their heads around each other. Nicholas not understanding why his father abandoned him. And his father not understanding why Nicholas won’t go to school or tell him what’s wrong, why he won’t be like: him.

As the realization that he is starting to act like his father more, and pushing blame on his son sets in, things spiral into dangerous territory for someone in Nicholas’ frame of mind. Hugh Jackman poured his heart into the role, and that much is evident in his 1:1 scenes with Zen McGrath. Zeller’s choices in writing and direction left the film feeling unbalanced at times. But he quickly brought us back with moments of emotional gut punches at various points throughout the film as both parents try to understand how to best help their son.

Of course, you leave the film feeling the weight of the events that happened, and the message it was trying to send. The film works to expose the truth in the way some handle depression, pretending it’s not there, lessening the person’s pain or suffering. Belittling it to teenage angst or ‘acting out’. If you can walk away from this film learning not to ignore the signs and to get those loved ones around you the help they deserve, then the film has done its job.

The Son is in theatres today Jan 20th. 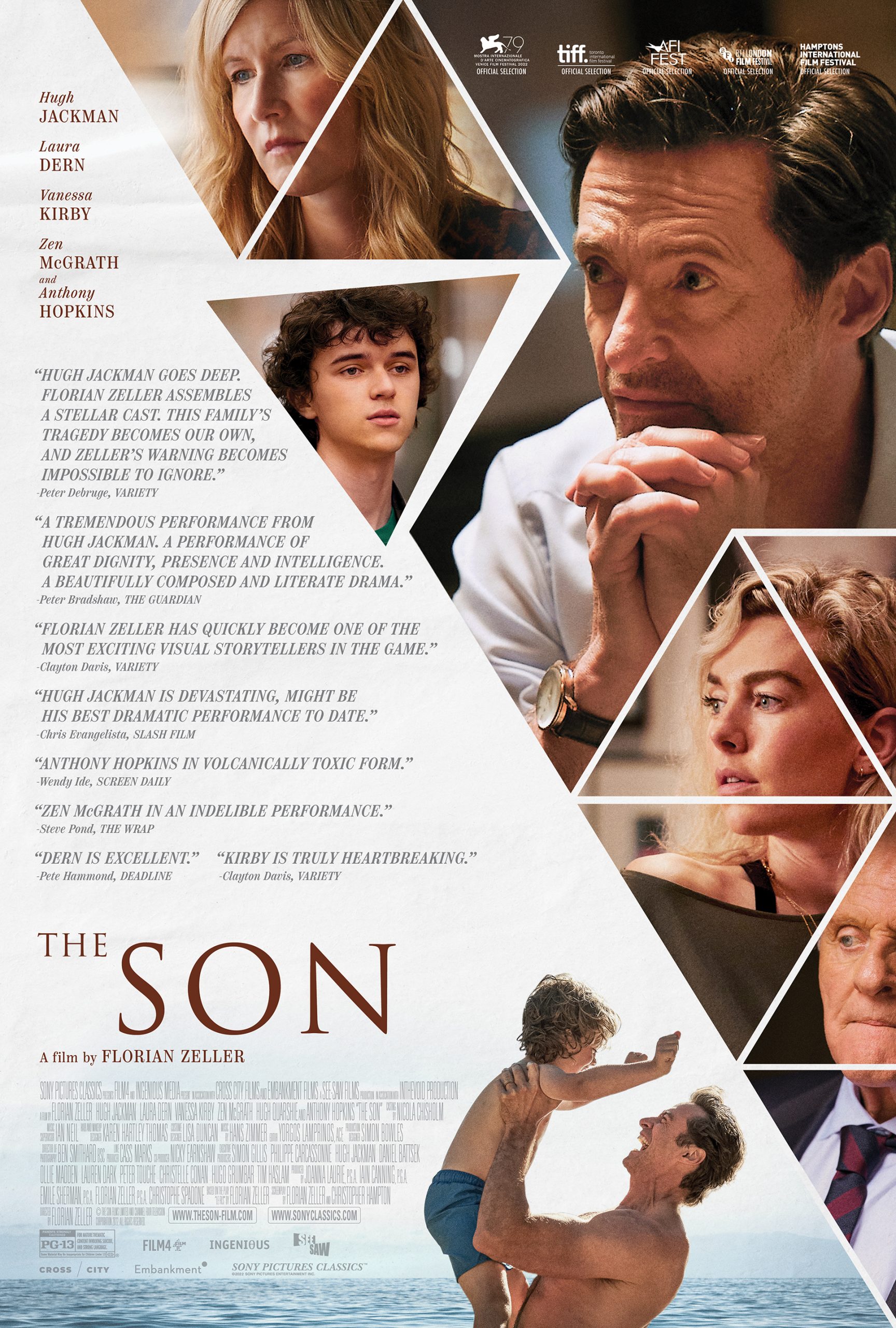