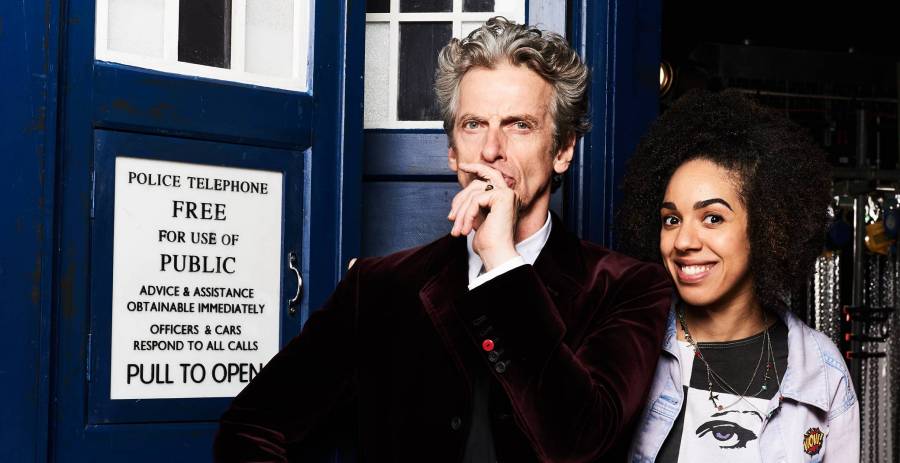 And Now, Some Words from The Doctor and His Companion: Doctor Who Preview

BBC sent us some goodies in advance of Doctor Who’s new season starting up this weekend! Sure, it would have been more fun to have had the opportunity to talk to Peter Capaldi, Pearl Mackie, Matt Lucas and Steven Moffatt myself, but that didn’t happen this week (a girl can hope, though), so we’ve got the next best thing! Here’s Part 1 – Peter Capaldi and Pearl Mackie!

What is it like working with Pearl?
It was great meeting Pearl – she brought a whole new vigor and excitement to the role of the Doctor’s companion. She’s not that different to older companions in the sense that she’s a character that doesn’t know anything about the Doctor’s life or about the TARDIS or about Daleks or anything like that so she has to be introduced completely to what goes on in his existence and that’s been a good way of rebooting the show. It allows people who aren’t experienced in Doctor Who to experience it for the first time.

Is it great to be back and saying all the iconic lines once more?
I think there’s loads of classic lines that are fun to say and I love saying “Time and Relative Dimensions in Space” and “Bigger on the Inside” and “They come from Skaro and will exterminate you.” I think you’re never too old to enjoy saying “TARDIS” although it’s better to say “This is my TARDIS!” I think they’re part of the fabric of the country – they’re in British popular culture which is nice but they will go on and on. 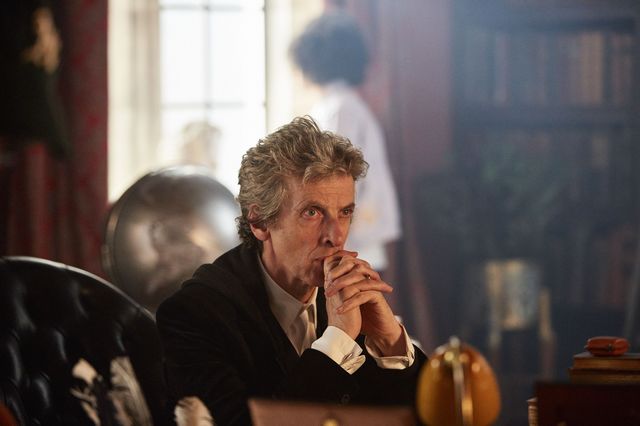 What have we got to look forward to in series 10?
The show is down to the basic elements which are these fairly innocent but independent companions travelling with this mysterious creature from outer space who can travel in space and time and take them to the most amazing corners of the universe where they meet terrible monsters who try to kill them. That’s at its very simplest level but obviously, it’s more complex and there’s more to it than that but that’s pretty much what we do every week. Some seasons have been less like that but this season very much follows that model of delivering every week – the mysterious creature takes the companions to an exotic and dangerous place.

What do you need to be a good companion?
Well, the companion (and Bill is a very good example of it) is sort of their own person. They tend to be characters who are fully formed and independent so I think to be a companion in Doctor Who you have to be your own person. It doesn’t really work if the companion is just an adjunct to the Doctor. There’s always got to be an element of conflict there, I think. Whether it be just “Why didn’t you tell us you were taking us to this planet of flesh eating monsters” or whatever – it always needs a little bit of grist in it.

Who is Bill Potts?
Bill comes in very much as a regular human being from the real world to whom all of this stuff is extraordinary. She knows nothing about it. But she’s a very clever, bright, funny girl. I think the Doctor is very taken with her as she’s one of those people who life hasn’t been great to and she didn’t deserve life not to be kind to her. She has enormous potential and I think the Doctor wants to help her reach that potential. 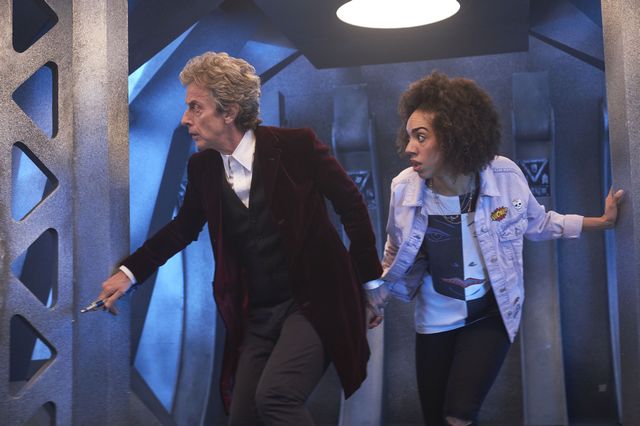 Can you describe the relationship between Bill and the Doctor?
I think initially he takes her under his wing in order to teach her – to literally improve her mind, but in quite a terrestrial way. Through that she becomes involved in his extra-terrestrial adventures and the expansion of her mind becomes quite extraordinary. It’s a kind of teacher-pupil relationship but it becomes more complex than that and I think ultimately the Doctor has to undergo some dramas by himself so I think he becomes slightly worried that he’s swept someone else up into his adventures without quite preparing them.

Are you excited for Matt Lucas’ return in Series 10?
Matt plays quite a crucial part in the show this season. He’s not there all the time but he is there a lot of the time – I don’t want to give anything away really. He’s very funny – a great presence to have on set and very talented and has a strange alien quality about him with his pale skin and clear eyes.

Tell us about Episode One.
We will meet the Doctor’s new companion Bill – see her in the world she’s used to living in and then plucked out by the Doctor and taken on adventures. We’ll meet some old enemies along the way and some new ones including a new and strange monster and we get to see Nardole, played by Matt Lucas, who will be joining us on our travels.

What have we got to look forward to in series 10?
There’s a lot of excitement in store – new and exciting adventures, new monsters and some old monsters coming back. We’ve got a team that see the Doctor through new eyes. I think with series 10 it’s a great place to start if you’ve never watched Doctor Who because Bill is so new to the world of Doctor Who – you kind of see everything through her eyes. So as she learns about it, you can learn about it too which I think is very exciting. We’ve got some danger in there too – there are some pretty hairy moments but we’ve got some humor as well. I hope you enjoy it! 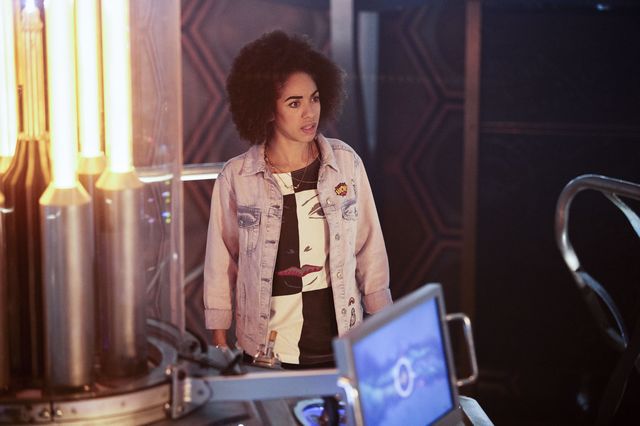 What is it like working with Peter?
The first time I met Peter was at the recall for this job in the Soho Hotel. I met Steven Moffat and Brian Minchin and Andy Pryor (casting director). Obviously I was reading with Peter. It was mental – obviously I was sworn to secrecy so I couldn’t tell anyone what I was doing or where I was going so I turned up to the Soho Hotel in a baggy T-Shirt, a pair of jeans and a pair of bright tallow trainers. We read the first scene (Peter and I) and we read it sitting down. It’s one of the first scenes in the first episode. For the next scene he said shall we stand up as we were going into the TARDIS. So I said ‘OK’ but I’ve been taught for camera auditions you sit down and move your face as little as possible so standing up was new for me. But obviously it was in the TARDIS so Peter was running around pressing buttons and pulling levers that aren’t there and I didn’t know what was going on. But luckily Bill’s supposed to be doing that in the scene anyway so that worked in my favor!

What makes Doctor Who unique?
Well, that it’s been running for such a long time I think is one of Doctor Who’s unique selling points. One of the ways it succeeds in doing that is the whole regeneration of the Doctor and then bringing in new companions along the way. It’s a character you’re familiar with but then there are different interpretations of the character so it allows people to relate to the Doctor in different ways and relate to the different companions and everyone’s got their favorite ones – either the one they grew up with or the one they watched when they were older or that kind of thing. I think in a way what makes Doctor Who so different to all other shows is that it can be completely personal and everyone has their own personal relationship to it. I think that’s why it’s so successful and lasted so long.

Did you have an idea of the global impact of Doctor Who?
I had some idea that it was a big show. I didn’t know how many countries it was big in before I got the job. I knew it was shown in America, I didn’t know it was one of the widely watched shows on Christmas day in America. It’s massive and has such a massive global following. Even from Twitter I get messages from fans in languages I don’t even understand, which is great but I wish I knew what they were saying! Going to New York was incredible; I’d never been to New York before. Going to Comic Con was amazing – there were people dressed up as me already. It’s super cool – I think the fans on this show are so dedicated to it, it’s amazing, I’ve had such a welcome so far. People dressing up as me and I haven’t even been on screen yet!

Who is Bill Potts?
Bill is cool – she’s quite young, doesn’t really know much about the world. She’s very real – she’s not had a very easy upbringing and whilst she doesn’t really let that affect her day-to-day life, it’s there under the surface – she can be quite defensive. She’s fun, she’s excited, she’s a bit geeky – she quite likes sci-fi stuff, she’s into space and that type of thing so when she does go on adventures with the Doctor and discovers aliens are real and that kind of stuff it blows her mind which is really cool.

Can you describe the relationship between Bill and the Doctor?
It’s quite interesting at the beginning – their relationship is very much tutor/student. It has an ‘Educating Rita’ vibe about it at the beginning when they first meet each other. There’s a definite fascination for Bill in terms of the Doctor – she’s really interested in the way his mind works – he’s supposed to be doing a lecture on science and ends up talking about poetry and he says they’re the same thing. Clearly his mind works in a different way to anyone else she’s ever met which I think is really fascinating for her. One thing he likes about her is that she’s not scared about all the things she doesn’t know – she always wants to know more – she’s keen to get involved which is one of the things that draws him towards her. 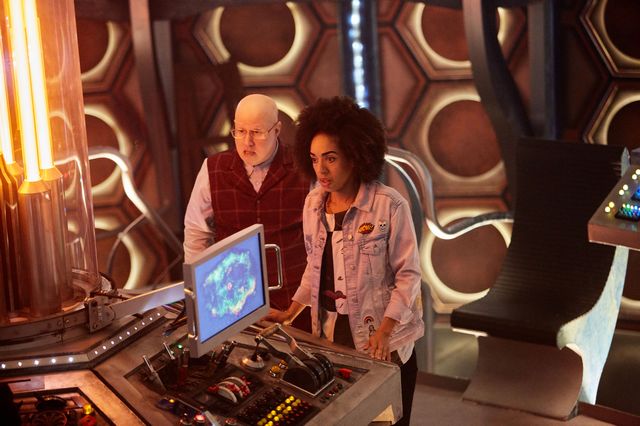 Are you excited for Matt Lucas’ return in Series 10?
Matt’s brilliant – he’s a great guy to have around. He’s always upbeat – we both really like musicals so we spent a lot of episode one singing various musical theatre tunes at each other.

How do you deal with the physical side of working on Doctor Who?
I think yesterday I walked about 3 km! I’ve done a lot of running – not as much as I thought, actually, but we haven’t filmed the whole series yet so there may be a lot more to come. But it’s cool – I like the physical element of the role – I did quite a physical show before this so I think it stood me in good stead for running away from monsters.

How does Bill learn to deal with all the extraordinary things she sees when she’s with the Doctor on his adventures?
I think she jumps in and is happy to get involved. She asked a lot of questions – she’s very inquisitive and she’s very smart so she calls the Doctor out on a lot of things that he hasn’t necessarily had to answer for a while so I think that’s the way she navigates through things – by asking him what’s going on and assessing his answers and she says things how she sees them. She has an open and honest nature which is how I think she gets through.