David Berry, our wonderful Lord John Grey, has a special relationship with fan group Berry’s Beefsteak (on Facebook: David Berry’s Society for the Appreciation of the English Beefsteak). He recently agreed to take fan questions sent to him from Facebook and Twitter, and responded in writing (not online). Beefsteak admin Roc Lyn asked me to publish the Q&A so everyone can develop a deeper appreciation for this talented actor! The  name of the person submitting the question is in italics. At the end of the Q&A, you’ll find a chance to win an autographed photo collage.

In addition to starring in Outlander, David also stars in Australian series A Place to Call Home (APTCH), which will be going into its sixth season (season 1 available with a Netflix DVD subscription, or all seasons for a charge on Amazon – free with Acorn TV).

Q  Sarah Yeh  Really enjoyed you and Adhamh’s singing in Vancouver! If you guys were to form a band, what would your band name be?
A   Lost in Translation

Q   Elizabeth Dumas  David, I am a former teacher (40yrs), your dressing down of Lt -Capt Leonard was spot on. Did that come from experience or great acting.
A   It came from a script that was handed to me the night before and a lot of cramming. 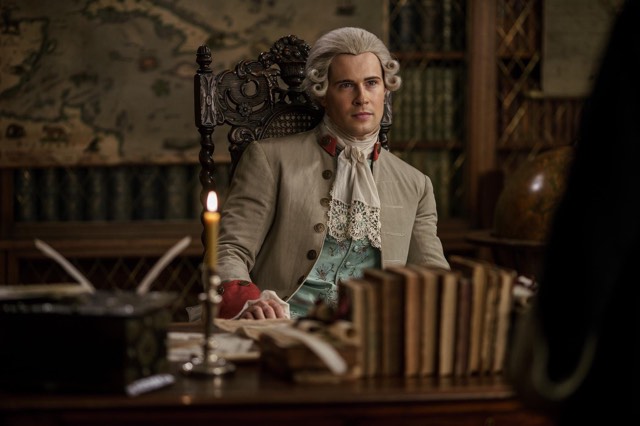 Q   Jill King  How much fun did you have shooting the scene where you got to put Lt Leonard in his place? Did you have any idea how much we would all love it? It was sooooooooo good!!
A   That scene was a last minute addition to the final ep and I remember receiving it with only maybe a night to prepare.  Fun but stressful.

Q   Lauren Thomson  And I’d like to know how satisfying filming that scene was?
A  Love playing scenes which give you that kind of power.  The writing did all the work for me. Challenge was to remember all the lines and speak at pace.  There were many takes…

Q   Fiona Riley Are you committed to playing LJG for the long haul, especially if the novellas are turned into tv?
A   If there was a spinoff series, sure.  I love the character.  No commitment at this time.

Q   Chris Bryant  Do you have any Scottish ancestry?
A   Not that I know of.  My father is Welsh.  Mother’s side is Irish.

Q   Jenny Jeffries  There’s a fair amount of horse-riding coming up – something you will take to or something you’re not keen on?
A   Love riding horses.

Q   Larissa Hofman  What’s your strongest HOT Aussie Xmas memory AND white winter Canadian one?
A   I think this answers both – missing my flight home from Montreal, Canada on 23 Dec and having Christmas in Aus on the 26th, a day later. 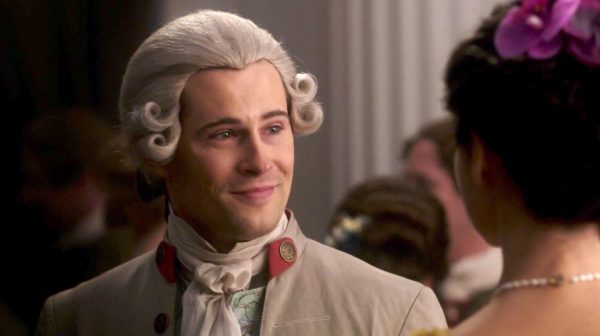 Q   Marga Frances-Perez  Are there any more episodes of “The Circle” planned?
A   Hopefully! We shall see.

Q   April Steele  Your character is so popular among fans – is it possible we may see your storyline expanded in the adaptation? #hopeful
A   I don’t have an answer for that, sorry!

Q   Jenny Jeffries  Do you prefer a stunt double to do the tricky shots or are you a bit of a dare devil?
A   I don’t think I’ve ever had to use a stunt double other than on APTCH where James is seen riding a horse at fast canter.  Always better to do it yourself, daredevil or no.

Q   Lynn Offley Binet  Your varying facial expressions are spot on. Is there something specific you are thinking about that helps you or just following the script? Whatever it is, keep doing it.
A   I don’t work from the outside in, so much of the time I’m unaware of what my face is doing.  I try to work from the inside out.  The face just reflects whatever I imagine the character to be feeling.

Q   Lisa Cole Perkis  I loved your portrayal of my favourite character in the Outlander series. Can you tell us about your connection to the character of Lord John and why you felt that you understood the character when you auditioned for him?
A   I connect with his humanity.  He is at once tragic and heroic.  I think any number of actors could play the role – Lord John is a popular character in Diana’s novels for a reason.  I’m just happy I was given the privilege.

Q   Anne Busby  Being in 2 successful shows how do you manage the scheduling with preparation time as well as family time? Love your LJG. Thank you.
A   I have a very loving and supportive wife. 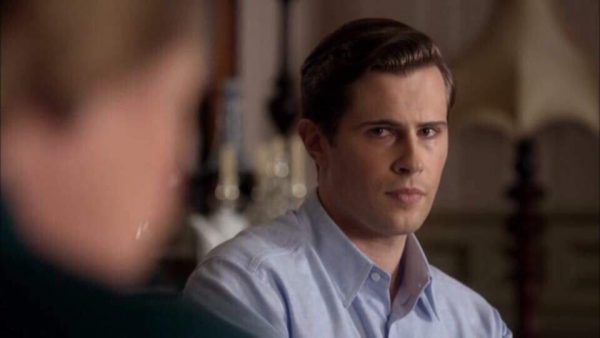 Q   Tracy Pressley Hi David, would you and your lovely wife and son like to hang out with me & Rachael Baldo at my place for NYE?!? The food & drinks are on me! Bring your cosies and your towel!! It will be a blast!!
A   You forgot to mention your address in the invite. (laughing hard face emoji)

Q   Jessica Gonzales-Reynante  Thank you for doing this! Well, I was wondering how it feels to take on roles that break perceived stereotypes. On APTCH and Outlander you play men with great strength and it means a lot to those that have faced great adversity. Thank you taking this role, making it your own, and giving fans someone to believe in!
A I feel very privileged to embody characters that connect with audiences in that way.  Credit belongs to the writers.

Q   Outback Sassenuts @OutbackSassenac What is your fave Xmas family routine/tradition?
A   Opening presents from under the tree on Christmas morning.

Q   Patti Kiselyk‏ @MissPat1411 Loving your Jays cap! Are you a fan or do you just have good taste in baseball hats?
A   Both my wife and I were born in Toronto.

Q   Stephanie Bryant‏ @twingles321 How does it feel to be in two fabulous hit shows at the same time? I’m also a huge fan of #APTCH & watched you as James Bligh even prior to your fantastic role as LJG, amazing talent!!
A   Lucky. Thank you for watching! 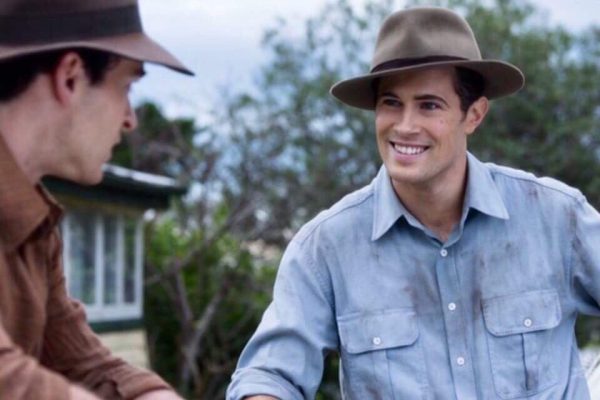 Q   Rita (Riota)‏ @ritagwood Will we see you doing more singing or perhaps a CD? Love the way you handle the oldies! InTheStillOfTheNight
A   Definitely something I would like to do down the track.

Q   WendyM  ‏ @tinkerbelle1972 Where did you find the motivation, what did you draw from, to bring LJG to life with such honesty? You nailed him perfectly IMHO.
A   I think the character is motivated by a desire to be deeply cared for and loved.

Q   Eleonora @Eleluoh You are simply amazing as John Grey. Can you tell us what scenes were the funniest and which ones the most challenging?
A   Funniest – having my fortune told and keeping a straight face with Lotte.  She is hysterical.  Most difficult – filming the chess scene in Ep 3.04 and remaining still while feeling completely frozen.

Q   Gretchen Landis‏ @GretchenLandis Do you think Lord John was waiting for some kind of gesture from Jamie when they parted ways in the Outlander finale? A handshake? A hug? Thank you for your brilliant performance in Outlander!
A   Perhaps.  Sometimes the wanting is more compelling than the having.

Q   Isabel Camus‏ @G_IsaCamus Did you think your character would be so successful this season?
A   I had no idea what to expect.  Thank you for the enthusiastic reception!

Q   Laura_ Smile:)‏ @LauraPerezagua What is your favorite scene and why?
A   The scene is Season 1 between Randall (BJR) and Claire. (Episode 1.06) (It’s) so unusual to see a scene of that length in tv drama and their performances were amazing.

Q   Je Suis Prête @LuvOutlandishly Thank you for bringing Lord John Grey to life. With #Outlander & #APTCH being considered dramas, I noticed the Domain ads for Noosa have been circulating lately. They’re so funny! Which do you prefer or feel more comfortable playing, comedy or drama? I love you in both!
A   Comedies are more fun to shoot.  Dramas are more interesting to watch.  I love them both.

Q Beth Wolfe‏ @WolfeTales Is it easier or harder as an actor to step into an established cast with its set dynamics & a character from whom so much is expected of by the fans? Fabulous portrayal of LJG in my humble opinion! Looking forward to more!
A The cast, crew and fans of Outlander made it very easy to step into the Outlander world.  Was like being welcomed into the home of a long lost friend.

Q   Isa‏ @1sa3 Could you tell us 3 adjectives to define Lord John? Thank you.
A   Honourable, fiercely intelligent, lonely 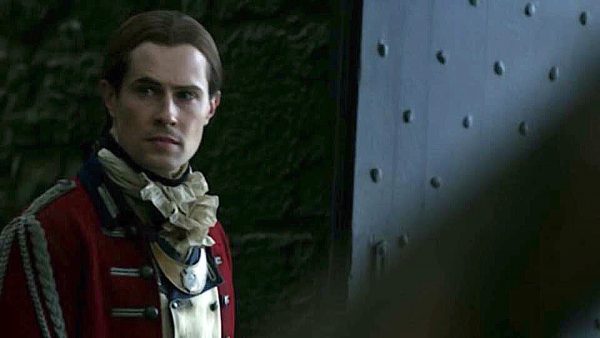 Q   Christine Gordon‏ @SassenachSJ  Any new projects coming up you can tell us about?
A   Committed to Outlander and APTCH at the moment.

Q   Brenda Tanjay‏ @Brenjay20 Will we be seeing James Bligh in Season 6 of A Place To Call Home? I feel like his story isn’t finished yet. #PleaseSayYes P.S. I love your portrayal of Lord John. Hope we see more of him in Outlander Season4.
A   James will return in Season 6 of APTCH, yes.

Q   Beth‏ @sqrlb8 Was it hard to get into a 17th century mindset when portraying LJG? I noticed individuals from that time period carried themselves differently. What sort of training, if any, did you have to do to prepare for your scenes?
A   Not hard at all once I put the costume on.

Q   Beth‏ @sqrlb8 What was your first and last scene you filmed in S3?
A   First scene was the dragging of Jamie on the horse in Epi 3.03.  Last scene was the scene that featured in the finale.

Q  @Maionegg I just want to know if you have a favourite dinosaur?
A   T.rex of course!

This photo collage was signed at the Outlandish Vancouver event this year, where David and Adhamh O’Broin were the special celebrity guests. It was provided by Koko Pipkin, the event’s organizer! Enter below to win. Open worldwide! 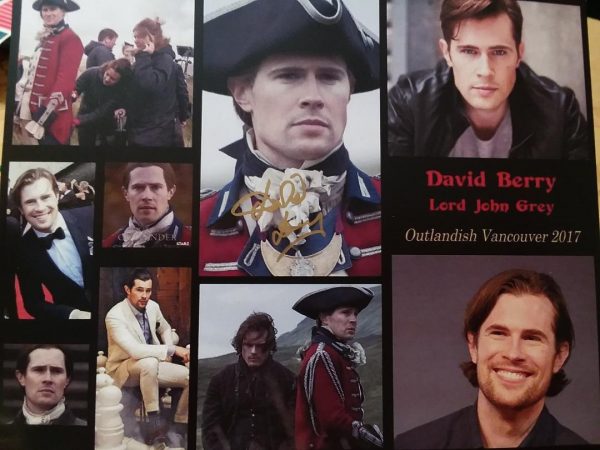