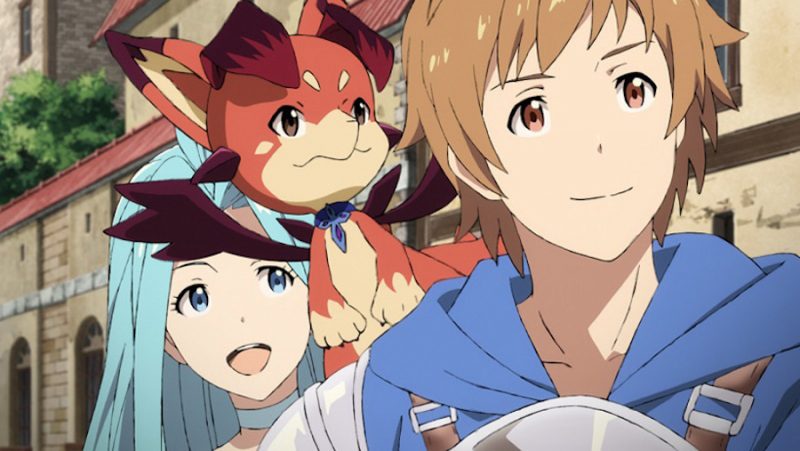 (Press Release) SANTA MONICA, CA (March 2, 2017) – Aniplex of America announced at their industry panel at Kawaii-Kon (Honolulu, HI) today that the smash hit game turned anime TV series GRANBLUE FANTASY The Animation will be released on Blu-ray in two volumes in 2018. The series is directed by Yuuki Ito (Blue Exorcist, Sword Art Online) and Animation Series Director Ayako Kurata (Magi: The Kingdom of Magic, Your lie in April) with character design handled by Toshifumi Akai (Magi: The Labyrinth of Magic, Full Metal Alchemist: Brotherhood).  The Blu-ray packages will contain exclusive illustration cards, a deluxe booklet containing a collection of the character, prop, and background art, along with an original soundtrack featuring the works of famed composer, Nobuo Uematsu, who is well-known for his music in the Final Fantasy games. Volume 1’s bonus content includes textless OP and ED, while Volume 2 contains a never before seen episode, exclusive to the Blu-ray release. Pre-orders start today with Volume 1 available on May 15, 2018 and Volume 2 on July 17, 2018.

Each volume is expected to go for $89.

GRANBLUE FANTASY The Animation follows the adventures of the bright-eyed protagonist, Gran, who sets off on an epic voyage after an encounter with a mysterious girl named Lyria. “Where this show shines is in the small interactions of its characters,” writes Rebecca Silverman of Anime News Network in a 2017 review. “In terms of character relationships, Granblue Fantasy has mastered showing rather than telling.” Much of that can be credited to the series’ truly veteran all-star cast consisting of Yuuki Ono (DURARARA!! x 2, VALVRAVE the Liberator), Nao Toyama (NISEKOI, The Asterisk War), Rie Kugimiya (Fullmetal Alchemist: Brotherhood, Persona4 the Golden ANIMATION), Miyuki Sawashiro (Fate/Apocrypha, Sword Art Online the Movie -Ordinal Scale-), and Hiroaki Hirata (God Eater, Sword Art Online series). The English dub featured in the new Blu-ray releases boasts an equally talented English cast including Kyle McCarley (Your lie in April, DEVILMAN Crybaby) as Gran, Kira Buckland (Blue Exorcist, Fate/Grand Order -First Order-) as Lyria, and Sandy Fox (DURARARA!!, ALDNOAH.ZERO) as Gran’s ever loyal companion, Vyrn.

The anime series is based on an immensely popular mobile game planned, developed, and operated by Cygames, Inc., which has amassed a following of over 14 million players. The game is known for its compelling visuals, colorful soundtrack, and top-tier voice cast. Since the game’s release, Granblue Fantasy has expanded beyond gaming into novels, merchandise, and a web radio program. Now with the Blu-ray releases, fans will get another opportunity to venture into the blue and beyond with Gran and crew!