Home » TV » TV Reviews » The Idea of North is a Pretty Good One – His Dark Materials Episode 2, Review

The Idea of North is a Pretty Good One – His Dark Materials Episode 2, Review

Reviewing a new show, especially one adapted from other material, is a tricky business. If that previous material was much loved, and has a devoted following, it gets even harder. And if the reviewer doesn’t know that previous material well, or not at all, it’s a difficult road to navigate. But not every watcher knows the original source material – networks create TV shows and movies for new audiences as well as the existing fan base. So I’m going to guess that about half the viewers of His Dark Materials, adapted from Philip Pullman’s book series, are devoted, knowledgeable readers. And half are closer to where I am with this – knowing little or nothing about the books.

It’s important that you, as my reader, know where I stand with the books. I’ve read the first one, The Golden Compass – once, right before San Diego ComicCon, so I could have some understanding of what the fabulous panel in Hall H was talking about. I really enjoyed the book, and had fun watching James McAvoy, Ruth Wilson, Dafne Keene, and Lin-Manuel Miranda at the panel. But I had no preconceived notions based on the older movie, no advanced information about the rest of the books or what happens in them. I review another giant book series-turned-TV-show, Outlander, from a completely different perspective, as a long-time reader and major fan.

I’m telling you this so you can read my weekly reviews in that spirit – if you haven’t read the books, but the show looked intriguing, I’m just one small baby step ahead of you. And if you’re a devoted reader, either loving the adaptation, infuriated by it, or somewhere in between, you’re way beyond me. So if I get details wrong, or make assumptions or predictions about what might happen, you’ll know where that comes from. If that puts you in a mind to argue with me, you might want to find another reviewer.

When I watched the first episode, with my limited knowledge, I was a bit confused – Great Flood? But OK. That episode left me a bit unsettled – while the photography was gorgeous, and much of what I anticipated about Jordan College and Lord Asriel were done really well, I was a little less sure about Lyra and the speed at which the episode moved. Lyra’s rebellious, wild childhood, and consequently her brash, untamed nature, was condensed; the Gyptians were barely explained. 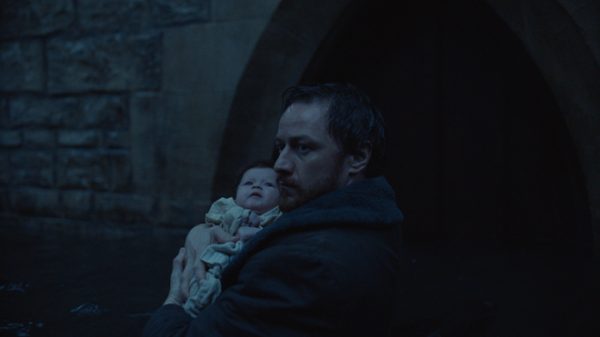 I had the idea, reading the book, that the setting was farther in the past (in this alternate world) than the show seems to be. Although, and I don’t have a problem with this, the show seems be existing in a time period not completely parallel to anything we can relate to. With modern-looking helicopters existing alongside giant airships and the antiquities of the College, and the beautiful Art Deco style of Mrs. Coulter’s apartment, the effect is to take the viewer and not give them one place to settle. It’s familiar – to a point – and strange at the same time. Which is a wonderful place to be.

Episode 2 – The Idea of North

While I was a little hesitant after watching the first episode, the second one really got me excited. There were several moments that I thought were done really well, and this episode included a story line that’s not in the first book, but  I’m assuming is included in future books.

I felt a much deeper sense of Lyra as a highly intelligent but untamed young girl. Her courage in trying to figure out what that noise in the apartment really was, and in standing up to Mrs.Coulter’s revealed cruelty, was terrific. Dafne Keene is an exciting young actress, and she’s doing a great job in the role. Often, a younger character will be played by an actor just slightly too old for the part (or in some cases, much too old), but Dafne is entirely age-appropriate for Lyra. I loved seeing her trying to figure out the alethiometer – speaking into it, attempting to make it move – and then finally, being shocked when it really does move. 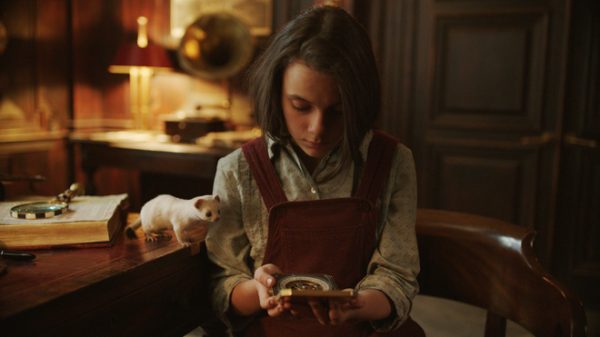 Ruth Wilson as Mrs. Coulter is great! She’s a very complicated character – she’s not faking her interest in Lyra, yet she’s got a very sinister and even cruel side. One quick shot as Lyra explored the lovely apartment was very telling – Mrs.Coulter watches her intently, something close to (or as close as someone like her can come) to love moves across her face. Yet, when she hisses at the girl and has her strange daemon attack Pan, you wonder what she really feels – is Lyra a means to an end, or really emotionally important? She’s intelligent, ruthless, bitter, cunning. When she takes Lyra to the club for lunch, you can see her delight and even pride at the girl’s curiosity and intellect, her desire to learn and explore. She’s also proud of her standing as the only female member in the club – and wants Lyra to understand and appreciate this. 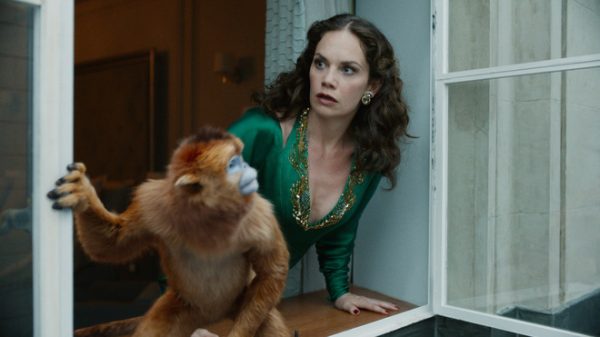 For all her control, she seems to have a weak spot where Lyra is concerned – in her anger, both at Father McPhail’s instructions and at Lyra’s disobedience, she reveals that Lord Asriel is not the girl’s uncle, but her father. As her protector and guardian, Asriel has seemed fairly neglectful but benign, loved but not outwardly loving in return (except, of course, his gentleness carrying her to bed in Episode 1). That he has lied to her her entire life, never revealing his true relationship, is something that Lyra can’t accept. Of course, as an innocent young girl, she can’t see the machinations around her, and isn’t aware of the prophecy and destiny that surround her. All she knows is that at this point, she knows nothing – she’s hurt, angry, betrayed. And Mrs. Coulter, who at first seemed so caring and supportive, is actually a cruel liar as well. Lyra is beginning to see something big going on – the journalist’s revelation that the Gobblers are actually the General Oblation Board, GOB, which is really, solely, Mrs. Coulter – of course she has to escape, before she is a victim of – something – as well. 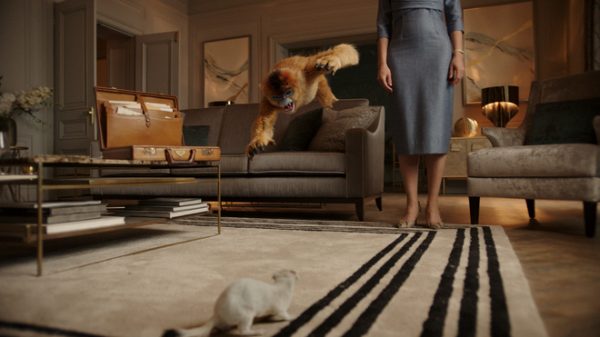 But what really intrigued me is something that definitely wasn’t in the first book, so it was a huge surprise to me – the portal into a world that looks a lot like our current life. The press release sent before the episode indicated “another world,” but I certainly wasn’t expecting this. Lord Boreal walks through a portal and he’s – on an urban street, with police stickers on his car and a cell phone in the glove compartment? And the people don’t seem to have daemons, but his contact is aware of them. Is this the “city” that Lord Asriel sees in his special photogram? Or another world altogether? And what does it have to do with the Magisterium, the General Oblation Board, and the danger in Asriel investigating Dust? Lord Boreal completely interests me. His ruthlessness is scary – the way he kills  the journalist from Mrs. Coulter’s party, by squishing her moth daemon; his associations with Father McPhail and with Mrs. Coulter – he knows things, and anyone in his orbit should be worried.

The Gyptians seem less gypsy-like and more action-oriented in the show than the book. Their raid on the warehouse, where they find Billy’s sweater (“jumper” to those of you who like the British terms), was straight out of an action film – with animal sidekicks. They’re not portrayed how I had envisioned them, and the separation that had been so interesting in the book seems fairly watered down in the show. John Faa isn’t given the importance I expected; they seem more like just regular people, apart from the highers and mightiers of Jordan College. 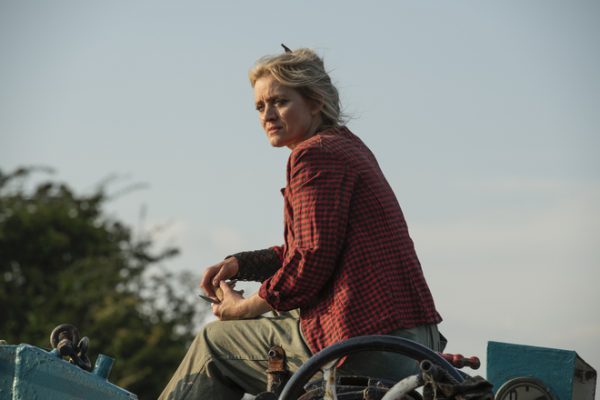 But I’m excited about continuing the story, and looking forward to next week. What have you liked and disliked, especially if you are new to this story? Comment below and tell me what intrigues you most! And for those of you who are die-hard fans, what’s working well – and what isn’t? For video of the San Diego ComicCon panel and groups/Twitter handles to follow, see my show preview here.

Here’s the trailer for next week’s episode: