Interview with Falling Skies’ Drew Roy – Stepping up in season 2 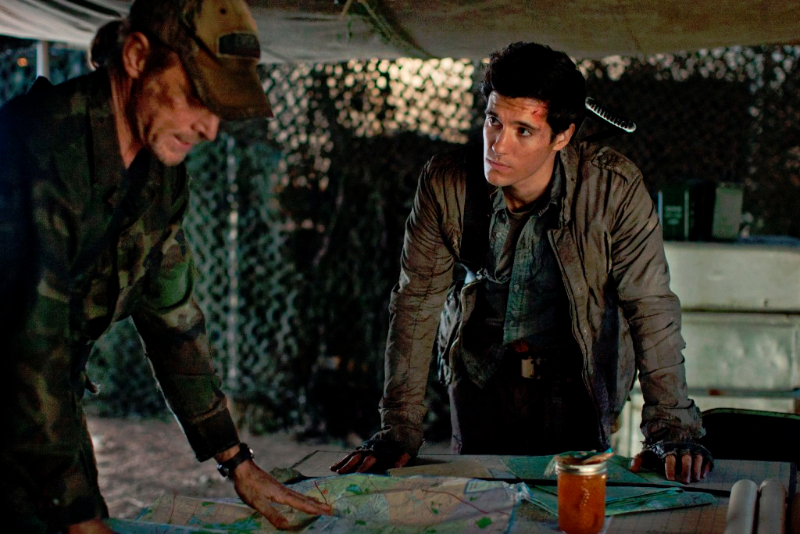 Just 39 more days until season 2 of Falling Skies airs on TNT. Over the last few weeks, Dark Horse Comics and TNT have released a comic that spans the 3 month gap between season 1 and 2. It covers an epic battle that occurred for the 2nd mass called The Battle of Fitchburg. EP and writer for season 2, Remi Aubuchon says that “the objective this season was to ramp everything up: the stakes, the personal drama, the tension. If the first season was about our characters trying to cope with the trauma of having their world turned upside down, this season is about taking action and fighting back”.

During the 3 months while Tom has been gone, both his sons Ben and Hal have stepped up as soldiers to help the 2nd mass and both butt heads as each tries to fill the void that their father once filled as leader. Tom went on the ship willingly in an effort to protect Ben from the continuing changes of the harness. Before stepping on, the aliens explain to Tom that the harness is a process and though Ben no longer has a harness on him, he isnt free from it.

We had the chance to talk with Drew Roy today, who plays Hal Mason on the show and ask him a few questions about what we can expect from season 2 and what he likes about the direction of the series.

Hal has stepped up as a leader among the soldiers in his fathers absence. Do you feel it’s a role he is ready for?

Even though Hal may not be ready to take on that role, he just does it because he has to. He has a lot of confidence and doesn’t look back. Hal has to take care of Matt and Ben. However, both Ben and Hal have a rebellious streak to do things their own way and that results in them butting heads throughout the season as each try to take on the role of their father. As part of Hals new role, he commands a group of fighters, one of which is Ben. Ben doesn’t like taking orders from Hal.

As we saw in the 3 min preview for season 2 just a few weeks ago, Ben didn’t stop shooting when ordered to do so by Hal. Ben has a vendetta against the skitters,  continuing to shoot at a skitter that was already dying,  putting people at risk.

During Season 1, Hal seemed to have a lot of trust issues with Ben, because Ben was holding back and not being transparent about what was happening to him. Does Hal feel afraid for Ben or afraid of Ben?

While most might be afraid of Ben, Ben is his brother, he is family. No matter what Hal is going to protect Ben regardless of what is going on with him. I look at it like handling a family member who has gotten tangled up in something that would mess them up or that would cause them to question themselves and you don’t want them to feel like you are judging them and Hal is there to try and help Ben. No matter how bad it gets for Ben, Hal will always protect him.

What do you think of the overall writing and plot for season 2?

They took a dangerous and interesting approach. Season 2 had all new writers but it paid off in the best way possible. The direction of this season is darker, grittier, and edgier. I always felt that would benefit the show. There is nothing squeaky clean about an alien invasion. Its dark and scary sometimes. The heart of the story has always been the family dynamic with aliens and that hasn’t changed.

Whose story do you think is the most interesting?

Ben, played by Connor Jessup, is the most interesting. He has such a fantastic role this season. Ben’s story is unpredictable and goes a direction people don’t expect but in a way that fits with the story and keeps you guessing.

What about Maggie and Hal?

Its a complex relationship. Hal comes from this squeaky clean, all American family and Maggie has an unknown background, was formerly involved with Popes gang and we just dont know much about her. Our characters become great friends and the relationship grows as each face danger with each fight.

We got the chance to preview the first few episodes of season 2 and we can tell you that you are in for treat this season. The story is deeper and more complex, bringing in the best elements of science fiction while also displaying the very real family dynamic one would expect from a small group of people just trying to survive after a huge disaster. Many lives have been lost since Tom left 3 months earlier, but the survivors are still pushing on in the fight against the aliens. Anne becomes a maternal figure for the mason boys, while Pope creates his own band of thugs to bring the metal to the aliens. It is unknown how far reaching the influence of the aliens are on Ben and what exactly the harness is still doing to him and others. As his strength increases, so do the questions and the consequences.

Keep an eye out for more coverage as we talk to Noah Wyle, Moon Bloodgood and Colin Cunningham about their characters and some of their favorite moments.