Gabriel Ba and Fabio Moon are twin brothers hailing from Brazil, they’ve been working in comics (in the US) for a little over ten years and have been attending San Diego Comic Con for 17 years, give or take a bit.  This was their first time attending Phoenix Comicon, which just so happens to be my home-state convention! I’ve had the pleasure of knowing the brothers for almost seven years and surprisingly this is the first time I’ve had the chance to sit down with them in an interview setting. We talk about their art school, travels, and their upcoming Dark Horse title “Two Brothers” below.

Three if By Space: Seven years in the making, it’s great to be here with you guys in this setting. My first question for you is, how is the art school going? I know that you guys have an art school in Brazil, teaching everyone how to bring their best to the page.

Fabio Moon: It’s a very erratic thing because we only do it when we have time. We open short term classes when we have time, and right now we don’t. The last time we did was like two years ago, but it’s nice to go to conventions, especially in Brazil, where we can see our former students becoming comic book artists and trying their own stuff. It’s nice to be able to talk about process and to explore everybody’s personal style and to develop everybody’s personal style. Our classes they focus more on the fact that you don’t have to draw like the people that you like, you have to find your own style, and that you don’t have to write like the people that you like. It’s more about “Let’s experiment and let’s try it out and let’s talk about it so everybody can find their own way.” We like it we just don’t always have the time to do that.”

TiBS: “Do you notice that they fill up really fast when you do open it up?”

FM: “They fill up really fast, they’re usually small classes because we can’t accommodate too many people.”

TiBS: “Is it mostly Brazilians or are there people from all over?”

GB: “Just depends on the schedules, I think we’ve had some offers, one or two. We are always doing projects and we can’t stay away too much. Traveling to conventions already takes too much of our time, our projects nowadays are always late because of that.”

FM: “Sometimes in Brazil and festivals in Brazil we have like two hour workshops but there is very little you can learn in two hours so we focus on like what we can really teach and what we can get out of people in two hours. That’s not enough time, so for us to develop a class we need more time, time for people to think about what we are saying with what they can do and right now we can’t spend that much time away from the studio, away from home. We did get invited to a school of arts, a big school that teaches comics in Georgia they wanted us to come, we received the invitation but for us we would need more time than we are able to give right now.”

TiBS: “So you guys are doing the Wonder Twins World Tour (see Twitter). What’s your favorite place that you’ve been to so far?”

GB: “I don’t know the most different one was India. It’s a whole different planet, everything is different; the food’s different, people are different, and most of them speak English so it’s easy to get by but at the same time everything is different, the culture, everything. It’s a whole different range of human beings, and places, and scenery, and architecture. We’ve only been to three parts of the country so it’s nothing inside of India as a whole. I don’t know, it’s good to go everywhere people have read our stuff. So, I think after Daytripper it’s helped because it was translated to a lot of different languages so it’s not only reading the English version it’s reading their own translation, which is good. We like to go to all of these different places and see how the market is different, how similar they are to the Brazil one or how different they are and how the small markets are all similar. They have their same struggles to start and to get going but they want to do basically the same thing, it’s nice.”

TiBS: “What’s someplace that you haven’t visited but would love to?”

FM: “Yeah, Japan and Austrailia. The other side of the world, we need to get to the other side!”

TiBS: “You guys do both the writing and the drawing, with something like that do you see the picture in your head first and do you build a story off of that, or do you come up with the story and build off of that? OR does it happen at the same time?”

GB: “I think it depends on each project, each story, sometimes it an image that sparks an idea or sometimes it’s just a dialogue, or sometimes just a shower (see Spotlight on Gabriel Ba and Fabio Moon for details). It really changes from one story to the other, I don’t know, we just know it when it happens. It really gets us excited and then everything starts to flow after that. We tried having ideas and developing ideas you know, ‘let’s try to stop and think about a new story’ it doesn’t work!”

FM: “We’re glad that we have projects that we don’t write. In the meantime between one idea and another we are busy doing other stuff, it’s good to get your mind busy, get your hands busy because when you’re working on something your mind is working so it’s to have an idea then than just try to have an idea and just be at this point, it’s terrible. We try to read a little more, when we are not writing, so we can have more ideas as well and (try to) see more movies. We fail in that aspect because we can’t really read as much as we wanted or see as many movies as we want, but we try. Ideas can come from anywhere and we are open to that.”

TiBS: “If one of you have writer’s block does the other help out or is that you both hit a wall at the same time or do you notice it goes in cycles? If writer’s block ever is an issue, that is.”

GB: “Our writers block happens every day, except when we have an idea. So it’s really the opposite, the rule IS having writers block. We know how to write, we know how to fool people, and we know how to pretend we are writing. We know how to tell a story, the hard part is having the idea so without the idea we will just be fooling around. Our writer’s block is at the beginning; once we have an idea once we start writing it’s just a matter of finding the pieces and putting them together. Our problems come before, when we have nothing, when we have nothing it’s like we have everything; too many choices and we just struggle with this vast canvas of possibilities. Then you know we search for easier things to handle and deal with because we have so much stuff to do, answer emails, plan trips, draw other people’s stories, everything is easier than coming up with a great idea so we can keep ourselves busy doing everything else if we don’t have an idea. Which is also why we take so much time.” 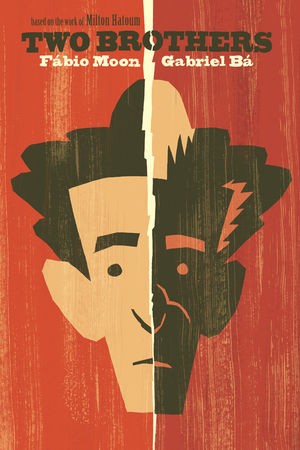 TiBS: “Working with all the publisher that you guys work with, what made you come to Dark Horse with “Two Brothers”?”

FM: “Dark Horse likes us, they treat us well. We have a lot of books with them so it’s easier to have everything together. It’s easier for the readers. We have, I think except Daytripper, we have our most personal stories published with Dark Horse. It just made sense to do “Two Brothers” with them. They really wanted to publish our new book so that’s why.”

TiBS: “Thank you so much for your time!”

Get your copy of “Daytripper” today:

For more Phoenix Comicon and Dark Horse Comics coverage keep it locked to Three if By Space!