Con Man is the brain child of Alan Tudyk, PJ Haarsma, and Nathan Fillion.  The IndieGoGo Campaign smashed it’s goal in less than 12 hours and now has started filming its second season! The show has a variety of stars making appearances and has many more in the works for the second season! There is also a Con Man video game, which P.J and I discuss below! 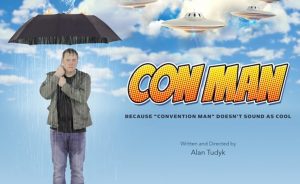 Three if By Space: What made you switch from writing to being a producer and writer for Con Man?

P.J. Haarsma: Well I was a producer first. So, I started as a fashion photographer back in the 80s. I then went from shooting, to directing, to producing commercials, then into film and then I didn’t like that and I left and I was back in the commercial world and really not happy, I was that mean guy. I started writing, really out of therapy, and I really quickly had a four book deal and fired everybody and thought I was going to be J.K Rowling and then the recession hit on top of the fact that it’s hard to sell books so then I came back and everyone knew me as a writer at that point; I came back into the advertising world at the same time Nathan and Alan wanted to do Con Man, and they said “No, come do ‘Con Man’ for us.”

TiBS: Did you know them prior to that?

Haarsma: Yes, I met Nathan maybe a year before the first Halo came out. We met at a party and because we’re Canadian we had to be friends automatically. If any Canadians meet each other anywhere in the world you automatically are friends. It says it in your passport that if you show somebody your Canadian passport then you’re automatically friends! We were out one night and my wife and I were bored at this bar and (Nathan) asked “What did you do over the holiday?” and Marsia (Haarsma’s wife) said “I’m a little embarrassed, we spent the entire Christmas holiday playing Halo.” And he looks at her and goes “You had me at Halo.”

Haarsma: We started playing; (for) two years, non-stop, every Sunday night he’d come over for dinner, and this is when you had to hook the Xboxes together, we’d play from Sunday night until Monday sunrise and you couldn’t miss it! It was three against three and if you missed it you were dog (crap) you could not do that! Nathan had troubles finding a good “third” and when Firefly started he and Alan became instant friends. He asked Alan if he played Halo and Alan goes “No” so Nathan said “Well, I’m going to teach you”. Alan came over and the rest is history, we’ve been friends ever since, 15 or 16 years. 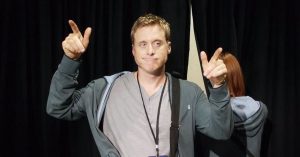 TiBS: How did the “Con Man” idea come about? I know it was Alan thinking of the stories of cons, but what sparked it to happen?

Haarsma: It was Firefly. Nathan wanted Alan to come out to the Firefly event and Alan really didn’t (know) “what, huh, what’s this all about” and he went and had such a great time. Then you see the other things that happen and I was going with my books at the same time and you see the “carny element” behind the scenes and you see what Joss Whedon coined the term “sci-fi ghetto”: these people that are these great fantastic actors that get stuck in it and are in this “sci-fi label” and they can’t get out of it. So, all the different things that happened, all these stories, Alan just started collecting them and taking those little kernels of truth and using his comic genius and turning them into this hilarity. I don’t know if you’ve seen “Con Man I hope you have but…”

Haarsma: “…good, holy crap that thing is funny! It’s not just smile funny it’s the “oh my god rewind that, what’d he say?!”

TiBS: “It’s so true too, watching that and saying “yeah I’ve seen that happen at cons!”

TiBS: What’s the most challenging thing so far (with “Con Man”)

Haarsma: I think that there are two things that are challenging. One is your vision and the amount of money you have to execute your vision. They never seem to be the same, and the more money you have the bigger your vision gets. So it’s always chasing it! The other one is there are so many wonderful actors that are involved in Con Man scheduling that many busy people is a nightmare. Unfortunately, on both sides, there’s some people that really want to do it and we can’t make the schedules line up, or there’s somebody we really want to be a part of it and we can’t make the schedule line up. A lot times (fans go) “how come you don’t have so-and-so in there”, they want to be there and we want them in there and schedules don’t happen! 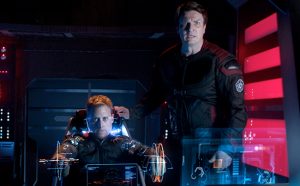 TiBS: Who was the hardest person to get for the last season?

Haarsma: Everybody, everybody was hard. Nathan is the hardest one to nail down, that boy’s so busy and he has such a limited window of when he can be at certain places at certain times so yeah, it was Nathan.

TiBS: How has filming at conventions been? Do you notice there’s a lot of interference or do you block off sections?

Haarsma: We make our own conventions. Those conventions you saw, those were ours. What I had done was I would go out with just me and a camera man and we would go to cons and we would shoot larger crowd footage, you know the hands and the feet and the costumes. We shot here in Phoenix last year we shot at Mega-con and we shot at Momo-con and all of that we shot tons of footage and that’s the footage we use when we need those establishing crowd shots.

TiBS: What’s the craziest thing that’s happened to you at a con?

Haarsma: That’s a tough one. Ya know I’m not a celebrity like those guys are so they’re the ones who have the running and the hiding. The craziest thing that I find at cons that nobody really understands is all the back alleys and pathways and things that go on. There are areas that are roped off that you don’t see and they have little go-carts whipping down them carrying people. So we were at a con last year and we were at a golf cart and somebody gave Alan one of those hoverboard kind of things and we was chasing us down this alley. Nobody knows on the other side of the curtain the cons going on and there’s Alan chasing me, Felica, and Mindy, on the hover board and there’s so many people hanging off this cart. I thought, “That should be on the show”

Haarsma: Working with my friends. Ya know I made a promise to Alan that I would give him a creative space where he could do his vision, that’s really what my job is. I created the sandbox that allows him to go do this and I take a lot of pride in actually making that happen for him. We had started on a very traditional route and it was very difficult with people wanting to change his vision and putting restrictions on it. It was a big boulder to get up the hill but once we got it to the top we’re in control of it creatively and Alan gets to do what he wants.

TiBS: Without teasing anything what’s the most exciting thing about season two?

Haarsma: A musical between Lou Ferrigno and Wray Neerly, it’s Of Mice and Men, where Lou plays Lenny and Wray plays everyone else including the mouse, so we’re really excited about that. I think that’s the thing that’s going to come out of season two. I’m making a prediction right now that you will see Con Man’s rendition of mice and men played out at a con one day. 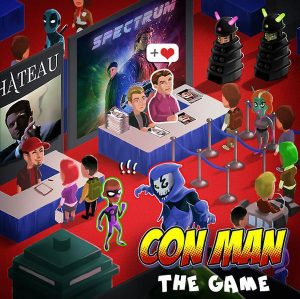 Haarsma: It’s not out yet; but it’s being made by Freema. I made the “Rings of Orbis” game myself. There is cosplay you have to find and get and it’s a “Sims style” video game, but you still have to battle these aliens that try to trash your con. You can battle up to three different aliens with one cosplayer. Each cosplayer has a super weapon and there’s, I think 12 different cosplayers. You have to hire staff to be in your con. The beta launched June 20th in Australia.

TiBS: You heard it here first at Phoenix Comic Con! Well thank you so much!