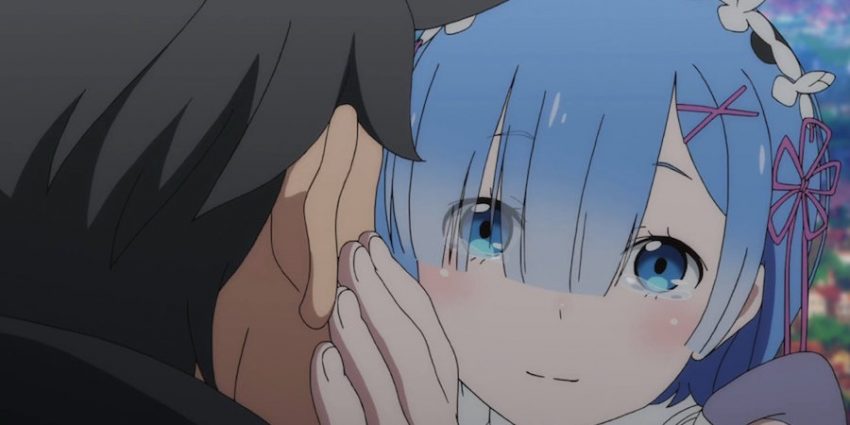 By: Robert Prentice
91 Days Funimation Re: Zero Yuri On Ice

It’s that time of year again and we have now finished another year of anime. Our Best Anime Series Of 2016 may not be the most popular series of 2016 but they are, in our opinion, the best series in terms of: Animation, story and musical scores. There was so much in 2016 we couldn’t possibly cover every single great new anime but we picked out our top 10 for the year and would love to hear if any are your top picks. If none are, what are your top 10 best anime in 2016?

2017 looks to have an incredible line up of anime from Attack On Titan Season 2, More Fate series, to a new Blue Exorcist season. Without further ado we bring you are top 10 best anime for 2016.

Rokuro Enmado is a young boy who used to be a powerful aspiring exorcist, before a tragic incident left his friends dead and made him abandon the profession. One day, he has a fateful encounter with Benio Adashino, a girl around his age and a well known exorcist from the east. According to prophecy, Rokuro and Benio are the “Twin Star Exorcists”, and are destined to marry and have a child known as the Miko, which will be the ultimate exorcist, capable of cleansing all evil spirits, or Kegare, from the world and ending the war that has lasted over a millennium.

This fun supernatural/fantasy series comes to us from Studio Pierrot. The animation is incredibly beautiful, although there are some moments that reflect some poor animation. The action sequences are great as well. The musical score from the opening, ending and fight scenes are both modern and unique.

Class 3E is about to begin their second semester! And while some things have changed, the class assignment is still the same: kill their teacher before the end of the year! Easier said than done since Koro Sensei’s made it clear he won’t go down without a fight. Will these students be able to take down the tentacled monster that moves at Mach 20 before he can destroy the world?

The classroom antics continue as Class 3E must find a way to kill their teacher before he destroys the world. However, as the series comes to its conclusion things become a lot more complicated then they planned. Nagisa and Karma’s relationship is one of the funniest moments of the second season and the most intense leading up to the final fight with Koro Sensei. If you enjoy slice of life meets science fiction, this series is for you.

Shokugeki no Soma tells the story of a boy named Sōma Yukihira, whose dream is to become a full-time chef in his father’s neighborhood restaurant and surpass his father’s culinary skills. But just as Sōma graduates from middle school, his father, Jōichirō Yukihira, gets a new job that requires him to travel around the world and closes his shop. However, Sōma’s fighting spirit is rekindled by a challenge from Jōichirō which is to survive in an elite culinary school where only 10% of the students manage to graduate, where he meets many amazing students and experiences new events that allow him to grow further towards his cooking goal.

Satoru Fujinuma is a reclusive part-timer with no plans for the future. What sets him apart from the other slackers in his town is an involuntary time travel ability that allows him to jump back several seconds in time in order to prevent accidents and even deaths. As incidents around town begin reminding Satoru of a childhood trauma he’d sooner forget, he finally begins to question what caused his ability to surface and whether or not it’s powerful enough to change the past.

This series catches you off guard and quickly turns into a race to save not only a young girl but his future and the lives of everyone around him. As the story unfolds, this time travel mystery becomes extremely intriguing as we watch the consequences of cause and effect on the future. You also get some genuinely emotional moments between Kayo and Satoru as the secrets of both their lives come out over the course of the series.

The story centers on individuals who are gifted with super natural powers and use them for different purposes including holding a business, solving mysteries, and carrying out missions assigned by the mafia. The story mainly follows the members of the “Armed Detective Agency” and their everyday lives.

Everyone loves a detective series but how about a detective series where the detective agency is full of ‘gifted’ individuals with super natural powers? From a were tiger to someone who has to kill you to bring you back to life this quirky series has you sometimes hoping the bad guy will win. Dazai is by far one of the most interesting characters who isn’t a flat our whiny baby.

The story is about a student named Kei Nagai, who discovers he is an immortal “Ajin” when he is hit by a truck. He becomes a wanted person because the Ajin are considered dangerous inhuman beings and the only person who is there to support him is his childhood friend, Kaito. While the government claims to help Ajin live in a safe environment, they are actually using them as subjects for cruel and inhumane experimentation. As a result, Ajin that have escaped are bent on revenge with the exception of Kei. During his escape it is subtly revealed he lacks the capacity for empathy and throughout the series only shows an interest in his own goals, however he actually tries to hide his feelings and cares about people closest to him.

One of this years under the radar series, Ajin is not a series you want to miss. The animation style stopped a lot of people from ever watching it but let me tell you that is a big mistake. The series brought back a lot of memories of Deadman Wonderland to me. Kei’s character comes across as an ass to many but if you really pay attention you understand the slow and subtle changes his character makes from first learning he is an Ajin to finally coming to terms with what he must do to go back to a normal life. His childhood friend Kaito will not abandon him no matter how much of a dick Kei is to him. It annoys you to no end, but the dynamic between Kei and Sato is by far the most intense and satisfaction relationship in the series.

Izuku has dreamt of being a hero all his life—a lofty goal for anyone, but especially challenging for a kid with no superpowers. That’s right, in a world where 80% of the population has some kind of super-powered “quirk,” Izuku was unlucky enough to be born completely normal. But that’s not going to stop him from enrolling in one of the world’s most prestigious hero academies. Now, the only thing standing between him and his first class is the academy’s formidable entrance exam—nothing a little private tutoring from the world’s mightiest hero can’t solve.

The new super hero series franchise, My Hero Academia is everything you could hope for. You get the slice of life school setup, super hero’s and students with all sorts of “quirks”. The two main characters of Izuku and Katsuki remind me of Naruto and Sasuke from Naruto. But don’t let that scare you away from this series. This fresh take on the super hero/school story avoids feeling like a repeat of history and more like a fresh and fun new franchise to sink your teeth into. Plus Ultra! Season 2 is right around the corner.

After suffering a crushing defeat during the Grand Prix of Figure Skating Final and other failed showings at other skating competitions, Yuri Katsuki develops mixed feelings about ice skating and puts his career on hiatus, going to college in Detroit and later returning to his hometown of Hasetsu in Kyushu. He visits his childhood friend Yuko at an ice rink known as “Ice Castle Hasetsu” and perfectly mimics an advanced skating routine performed by famous Russian figure skater Victor Nikiforov, who is Yuri’s idol. When secretly recorded footage of Yuri’s performance is uploaded to the internet, it catches the attention of Victor, who travels to Kyushu and offers to coach Yuri and restart his figure skating career. Together with Victor, Yuri aims to win the ISU Grand Prix of Figure Skating series as he battles against his rival, Yuri Plisetsky, a 15-year-old rising star skater from Russia.

A lot of people never saw this series coming or expected it to be worth watching. But for the first time ever, I can say that a sports anime was worth watching. The series focuses on the relationships of Yuri Katsuki and Yuri Plisetsky as they both fight to win the Grand Prix as each looks for help from Victor Nikiforov. However, the relationship of student and coach goes much further with Katsuki. Each episode builds up to the final skating event and things heat up with each new episode. While many have been turned off by the relationship between Victor and Yuri, the way the series brings it about is far more natural and about love than lust.

Prohibition—a time where law holds no power, and the mafia prowls the streets. Avilio Bruno has grown up alone in this murky world after the Vanetti’s murdered his family. One day, he receives a letter that holds the key to revenge. Befriending the don’s son, Nero, Avilio works his way through the Vanetti family and sets his vengeance in motion. But 91 days of killing can only spawn more tragedy.

This is one of the rare occasions where I would argue with any anime fan that the dub is superior to the sub. The setting of this series just begs for a good english dub with the dialect and accent that fits Prohibition era America. Not only does Funimation deliver, but the series story also delivers.

Subaru Natsuki is suddenly summoned to another world. With no sign of who summoned him, he soon befriends a silver-haired half-elf girl. When he and the girl are mysteriously killed, Subaru awakens and discovers that he has acquired the ability “Return by Death”, enabling him to reverse time by dying.

Our number one pick for best anime series of 2016 is Re:Zero. This should come as no surprise to fans around the world who tuned in weekly to watch Subaru get tortured again and again and again. Or to watch Rem be the absolute best girl and Subaru just trash that ship in every way possible. If “Return By Death” wasn’t killing him, we sure wanted to. The raw emotion in this series is difficult to surpass and that is why it made our list at #1.

So we have made it through our best anime of 2016 post, now what picks do you agree or disagree with? What are you most looking forward to as the best anime to come in 2017?