Whether you were lucky enough to purchase last year’s Lot18 Outlander wines, or, like me, you missed them when they sold out in three days, you have another chance! Starting today, October 9 at noon eastern, you’ll be able to pick up one or more of 6 brand new varieties, developed with Outlander in mind. You’ll find them at Lot18.com/Outlander!

The limited edition collection features six hand-crafted blends, available individually or as a set (bottles sell for $18-$25 each, depending on variety and number purchased). I spoke exclusively with Meredith McManus, Lot 18’s Director of Marketing, about the development of the line. “In conversations with Sony, it became clear that while the characters and themes we used (in the first collection) were important, this season is more about the love story, about how they have different personalities in different times, how those personalities interface, and really weave the story. We focus on different  aspects of Jamie and Claire –  Les Dame Blanches was a really important moment, and A. Malcolm when Jamie was hiding.  We wanted to capture moments in the story, The books and tv show are so popular because people can relate to Jamie or Claire – they feel the same love and connection. Maybe you relate to Claire’s feisty side, her intelligence, ahead of her time, she’s brave, outspoken; maybe you’re more of a hopeless romantic. There’s something for every fan.” 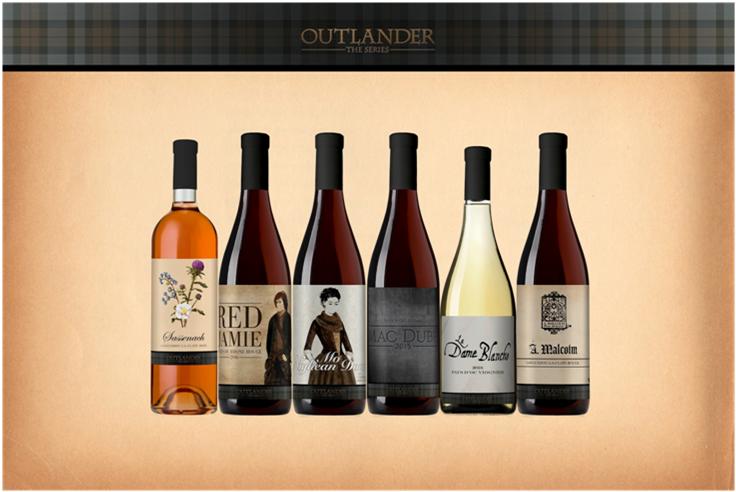 How were varieties chosen? “Once we figured out that we wanted to focus on Jamie and Claire, we talked about wines tied to pivotal scenes. That led us to the nickname and alias route – three key nicknames or aliases for Claire, three for Jamie, for a perfect grouping of six. We looked at characteristics, what wines would make sense there. In general in a varietal sense, we looked at where can we source them, what producer has something that aligns. We knew there were some we wanted – fans would probably be expecting a rosé. We wanted at least one white and one red, so everyone could partake and find something they enjoy.”

Lot18’s Sommelier, Jennifer Ingellis, said, “I became a part time viewer, and was intrigued. In my mind, the characters, especially Jamie and Claire, lent themselves to certain wines quite seamlessly. This year’s selections center solely around them, so I was able to intertwine the wines even more than last year. For instance, one of Claire’s wines, the Sassenach Langeudoc-la-clape-Rosé, is from the same estate as one of Jamie’s wines, the A. Malcolm Languedoc-la-clape Rouge. Both wines are blends of Rhone varieties, so in a sense they are a part of one another.”

I asked Jennifer if she realized just how fitting it is that there are licensed wines. “As a part-time viewer, I didn’t realize that Jamie worked for his uncle in France as a wine merchant, but as fate would have it, all of his wines are from France, so it’s a bit uncanny how things work out. And I do think he’d approve, especially of the Red Jamie Côte du Rhône Rouge and the La Dame Blanches Pays d’Oc Viognier. Both of these wines have quite enchanting aromatics.”

She added, “Additionally, Claire’s charming and captivating personality immediately seemed quite befitting with aromatic and seductive varietals, like Viognier and Pinot Noir. Two of Claire’s nicknames, La Dame Blanche and Mo Nighean Donn, fit with these characteristics extraordinarily well, so voilà. While Jamie’s intense, alluring and sometimes dark personality seemed more characteristic of Grenache and Syrah based wines, so his wines all have these varieties as a common thread.  The wines range from a more exuberant and lively wine like the Côtes du Rhône Rouge to darker, more intense wines, like the Pays d’Oc Syrah and Languedoc-la-clape Rouge.”

The six wines available are: 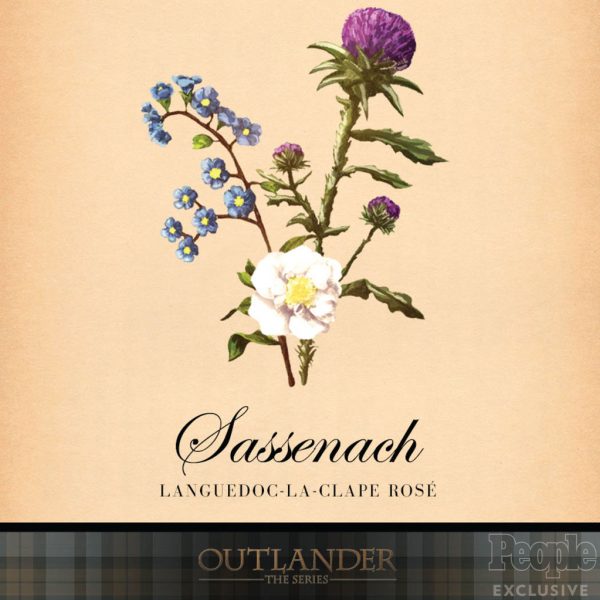 Sassenach – Languedoc-la-clape Rosé
As a visitor of a time and place that’s not her own, Claire is a true outsider until Jamie Fraser draws her into his world and bestows upon her the playful nickname Sassenach. This rosé is Provençal in style, but like Claire, it comes from an unexpected place — Languedoc-la-clape, where the limestone-rich soil lends the wine its flavors of strawberry, white peach and grapefruit, racy minerality, and clean finish. Sometimes a fresh new perspective is exactly what’s needed. 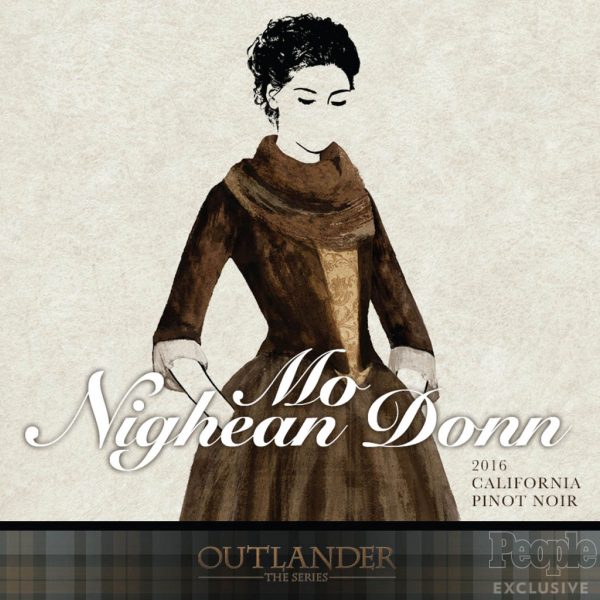 Mo Nighean Donn – California Pinot Noir
“My brown-haired lass” is what Jamie affectionately calls his charming new bride in Gaelic, and there’s no better wine to embody that side of Claire than this earthy, seductive Pinot Noir. Exhibiting flavors of black raspberry, forest floor and tea, this complex and balanced wine will make anyone fall in love with its alluring qualities immediately. Don’t bother attempting to resist its delightful and immensely appealing ways. 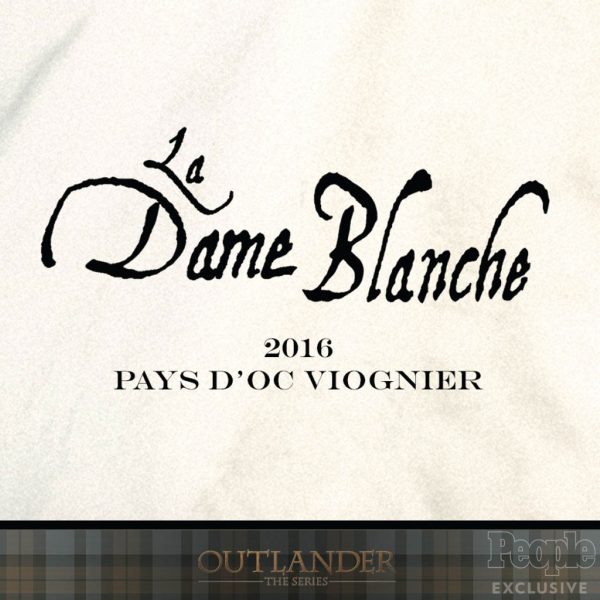 La Dame Blanche – Pays d’Oc Viognier
She is given the name La Dame Blanche by her husband as a clever ruse, but in truth Claire does possess some of the cunning powers of this mythological figure, using them to turn fortunes her way. This French Viognier is similarly persuasive in its nature, with a heady floral aroma that leads to peach and apricot flavors on the palate, all lifted by a vein of acidity. Upon first sip, you’ll find yourself hopelessly enchanted. 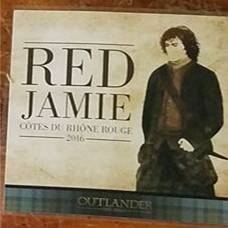 Red Jamie – Côtes du Rhône Rouge
Whether he’s fiercely defending the love of his life or charging off to war alongside his clansmen, the notorious Jacobite Red Jamie is a force to be reckoned with — as is this dynamic Côtes du Rhône named in his honor. With a vibrant acidity and tannic structure keeping the flavors of red plum and blueberry in check, this red blend of 70% Syrah, 15% Carignane and 15% Grenache will have you surrendering after just a taste. 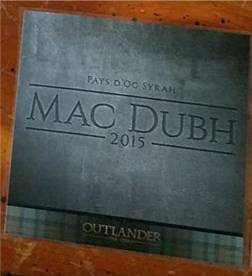 Mac Dubh – Pays d’Oc Syrah
Even as a prisoner at Ardsmuir, Jamie retains a commanding presence, rallying the other prisoners and earning their respect as a leader. They give him the nickname Mac Dubh, or “son of the black” — and it’s this earthy, brooding French Syrah that embodies this dark version of Jamie. With plenty of concentration and blueberry flavor, this is an intense wine that grabs your attention and doesn’t let go.

A. Malcolm – Languedoc-la-clape Rouge
A fugitive after the Jacobite rising, Jamie Fraser must become Alex Malcolm and begin anew as a printer in Edinburgh … yet under this simple facade lies the same complex and passionate man who captured Claire’s heart. Equally unassuming, at first, is this red wine from a small appellation in southern France. It becomes clear after experiencing the pure, black-red fruit nuances, however, that this is a charming, formidable wine — one you won’t easily forget.

Meredith added, “When we were sourcing the wine, we wanted the labels to feel high end and beautiful. It was a little funny, knowing we were going to such lengths to get such great wine, and a lot of people won’t even open it. This season’s collection is still very limited in quantity, but we increased the total number of bottles. Last year, we knew the wines would be popular, but we had no idea they would be as popular as they were!  It sold out in three days – we thought it would take a month. So we nearly doubled number of bottles. We still think it’s going to fly off the shelves.”

You’ll have several options to purchase – individual bottles, sets of three Jamie wines or three Claire wines, or a case with two of each bottle. Because of shipping costs and legal restrictions, shipping will only be to US addresses. At the bottom of this article, you’ll be able to enter to win a $25 gift certificate toward your Outlander wine purchase (or any other Lot18.com item).

Considering having a tasting party? Jennifer suggests a “blind tasting” to see if your friends can identify which character the wine might be for without first seeing the label. But if you’re looking for menu suggestions for a tasting or party, she offers these pairings:

About Sommelier Jennifer Ingellis: As one of the most widely recognized and respected wine professionals in Napa Valley, Jennifer Ingellis has more than 17 years experience in the restaurant industry, including as Food & Beverage Director for celebrity chef Cindy Pawlcyn and her award-winning restaurant group. In 2012, Jen was honored by Food & Wine magazine as one of their Sommeliers of the Year. She currently works at Tasting Room and Lot18, where she sources wines from around the world to sell through exclusive wine clubs, and pairs them with recipes for The New York Times Wine Club, Williams Sonoma Wine Club and HelloFresh, among other clients. When not drinking a glass of wine, you can find her sipping on another favorite, tequila. She feels grateful every day to be doing something she truly loves.

Want to chat about the wines? Use #OutlanderWine and #SassenachRoseAllDay