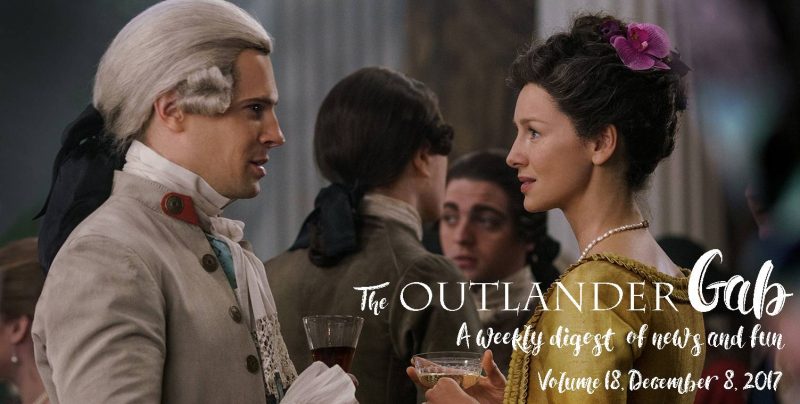 BREAKING NEWS! Immediately after the Season 3 finale Sunday night, Starz will air a Season 4 trailer (before the preview of Counterpart)!!! So even if you watch it early, be sure to tune in on Sunday and see the teaser!! (There was no word whether this teaser would also be shown after early airings over the weekend.)

Lotte talks about The Bakra’s blood bath for EW

Sam talks about travel (in my hometown newspaper, the Chicago Tribune!)

Back to the Tweets…

My fave costume of the season (other than that damned suit) pic.twitter.com/PrK5sLkQkI

Well, here’s the thing… early next week, I’ll give you a whole Outlander gift guide, including some giveaways for some great items! So I’m not going to bring you anything today – watch for the Gift Guide!

Looking for something REALLY weird to watch? Try Happy on Syfy. Here’s Michelle Harvey’s review of the pilot.

From the ridiculous to the…medieval, Knightfall on the History Channel is a fictionalized version of the Templar Knights. John Baker reviews the first episode.

Maybe you’re looking for gifts for other nerds in your life? Here’s our Doctor Who gift guide. (There’s a Star Trek gift guide coming soon too!)

The excellent Epix network CIA show, Berlin Station, wrapped up its second season this week. And season 2 of The Crown on Netflix starts this weekend. Unfortunately, neither of these fit in Three If By Space’s nice to review, so all I can say is, I strongly suggest you watch them both. One new show that we WILL cover, though, is Starz’ Counterpart. You’ll get to see a preview of this immediately after the Outlander finale this week – let me know what you think of it! That and USA’s Colony will make my January very busy.

Oh, and there’s some holiday coming up that I suppose will add to the business of life this month! I hope you all have a happy season.