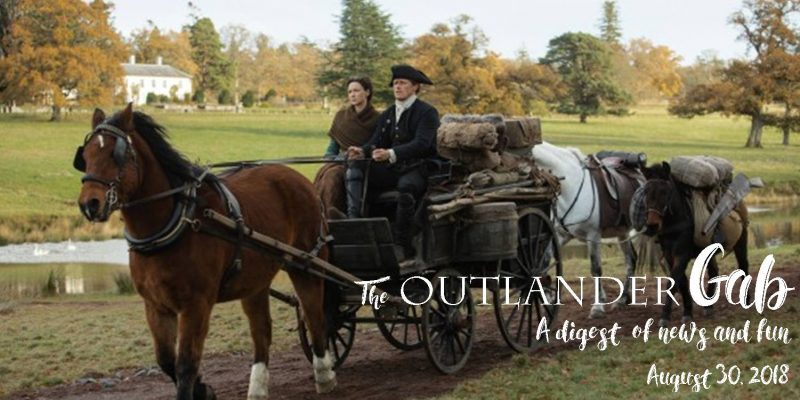 Outlander Gab – We’re Back! News, a Poll and a Contest!

Hi there! It’s been a while – but as we ramp up toward the season 4 premiere date, just over 2 months from now – it’s time to get back to giving you all the news! There’s a contest at the bottom with a terrific prize – make sure you get all the way there!

Karen Henry’s Outlandish Observations blog celebrates 10 years with a great 2-part interview with Diana! Karen has known Diana for many years, and is even thanked in a couple of the books. Check out Part 1 here.

Love Sam’s red carpet looks? Here’s a photo collection of some of the best!

Ron Moore and Tall Ships Productions are working on a new sci fi series for Apple’s original programming venture. The as-yet-unnamed drama is set in a world where the space race never ended. The show will star Sarah Jones, Joel Kinnaman and Michael Dorman as NASA astronauts. No word yet as to a debut date.

Leanne Aguilera and ET Online bring us a new interview with Sam and Caitriona! Leanne is as big a fan as the rest of us, so that always makes these fun.

Sam, Caitriona and Diana are all fairly quiet this week – Sam and Caitriona are both working on their new films, which we are all excited to see! Terry’s been active, though – here’s someone she recommends following.

A great read, and an excellent discussion on how much costumes help to tell the story.
If you want to explore that perspective, I would suggest you follow @tomandlorenzo.
They continue to carve out a singular forum that looks at costumes in a very nuanced and sophisticated way https://t.co/Ky8AtQArer

To my favourites on #NationalDogDay… 🐾 pic.twitter.com/RDJ2WwI1Jg

Did someone say #NationalDogDay? #Outlander pic.twitter.com/eXM9EktXmJ

Rather than give you all news about something I’ve found recently, I’d like to ask a question I’ve asked before. It’s the whole issue of Stuff – there’s a lot of Outlander Stuff out there. Some of it is lovely; some of it is kind of ordinary; some may make you shake your head with disbelief. I’ve bought more than my fair share of Stuff, and I’m sure most of you have, too. I’ve spent several hours talking with licensees – people who have paid a LOT of money to Starz in order to use specific images in their merchandise, and receive the blessings of the powers that be to market them without fear of copyright issues. A lot of those discussions have included “be aware that this audience isn’t 15 year old boys,” and trying to stress that we have different wants and interests than most of the fandoms looking for show-related items.

However – and this is not a criticism of those companies, rather I think it’s a failing of the the powers-that-be to understand this and have some imagination over what they’re allowing licenses for – we’re not really seeing a lot of items that do Outlander proud. Sure, I LOVE (and sell) the trading cards, and I didn’t think I would be, but I’m crazy about the Funko pops. But with a few specific exceptions – some of the higher-end jewelry, and a couple of lovely jackets, specifically – there are CATEGORIES of things that could be done that aren’t. We don’t need Jamie’s face plastered all over everything to make it Outlander-y – between the gorgeous costumes and the stunning sets, why wouldn’t lines of RELATED items be successful?

I’m bringing this up now because Terry, on her @OutlanderCostum account, showed some pictures recently that she had at one time suggested as possible merchandise lines – clothing and handbags based on costumes, etc. (Out of respect to Terry, I’m not going to show the pictures here – they’re available on her Twitter account if you’d like to see them).  For some very complicated reasons – contracts (silly little things like that) not allowing her to make these products officially or unofficially – these items were never created. But if Starz and Sony knew that we’d support (i.e. BUY) things that weren’t in-your-face Outlander, but used the beautiful designs we’ve seen and loved in the show, maybe they’d think about creating and offering them.

So in that vein, I’d ask you to take the poll below, and I’ll figure out who to share it with.

When I attended Wizard World in Chicago last weekend, I was fortunate to meet our Brianna, Sophie Skelton, and she signed this lovely 8×10 photo just for me to give to one of you. Enter below! I’ll choose one winner next Wednesday. Open worldwide. (Because I’ve done these before – if you have trouble entering the contest, before you contact me – comments as an entry go in the comments section for this post, not in the Rafflecopter box; and if you’re on a mobile device and having trouble, try moving to a laptop or desktop computer; if you’re having trouble there, switch to a different browser, like Firefox instead of Chrome, etc.) 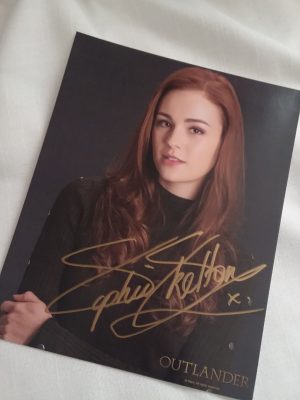