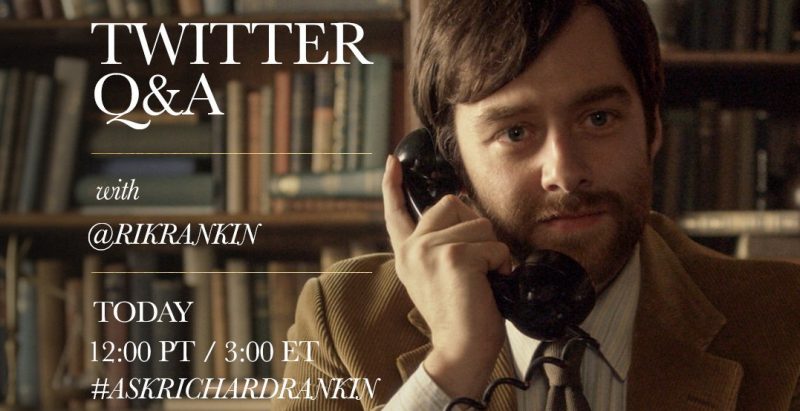 #Outlander: Rik Mixes the Serious With the Silly on Twitter

Rik Rankin did a fun Q&A with fans on Twitter yesterday. Here’s that conversation!

Rik: Twitter Q&A very shortly. Come join. Can I just request that you don’t ask multiple questions so that I can get through as many people as possible. Don’t be bloody greedy!

Q Do you think Roger should marry Fiona and fill the manse with baby Wakefields, stay in 1970s and run a safe B+B in Inverness???
A Why Roger hasn’t come to this conclusion already is beyond me. Maybe he still will?! We aren’t even half way through the season yet and Brianna seems to have disappeared…

Q Do you think Roger should just find himself a Scottish lass? and save himself a hell of a lot of trouble or is Bree worth it all
A I see a pattern emerging…who says Scottish Lassies aren’t going to cause just as much, if not more heartache for the man?

My Q for you 👉🏻 Do you think playing Roger Mac in the 18th century will be a big change to playing RogerMac in the 1970s?
What will be the biggest change?#AskRichardRankin pic.twitter.com/iT8gLOl03F

A If Roger were to somehow find himself back in the 18th Century then, yes. It’s a very different time. A more dangerous time and he would have to try to adapt to that. Quite the change from his history books!

Q I hope he’s reviewing the ones already posted. They should have made it clear. Now I don’t know whether to repost or not … he might yell at me!
A I will probably yell at you anyway.

Q you’ve played so many different occupations(surgeon, detective, professor) is there one you’d like to play again? Or a profession you’d like to try in a future role?
A I feel i’ve been very fortunate in the diversity of roles I’ve had the opportunity to play but I think as long as the script is good and the character is well written, then I’m not too hung up on the occupation or profession. #astronaut

What are you reading right now and how much do you enjoy #RichardVPuppy? #AskRichardRankin pic.twitter.com/hQooz2bv5X

Q Excuse me @RikRankin can I sit in between you two at this event? Thanks
A I’m afraid there might not be any room.

Q How do you feel about the undying love and devotion, the unwavering commitment to you, the everlasting spirit and neverending adulation that you receive…..from your horse?
A

If only that were true. Unfortunately my horse holds quite the grudge if i’ve been absent. Which I have. So I fully expect to be unseated next I see her.

Q So we know Roger is quite the musician and you dabble on drums and guitar…so if you and your character could be in any band from any era, what would it be and why?
A Well he’s a 60s man. So i’m going to have to say The Beatles. Pretty sure he could take Ringo’s spot as second best drummer in the band.

Q you’re pretty bawsy Richard, would you want to take this role in a biopic? #RichardisPaul loved you singing to Stephen W behind the curtain in Las Vegas!
A I feel like I would nail this. Just saying. At least let me try. LET ME TRY.

Q aside from people with whom you’ve worked, what actor most inspires your own acting style?
A I’ve worked with and continue to work with some really great actors and I feel like there’s always opportunity to be learning and developing from them. It’s not always really established actors either but any actor whose process interests me. #Askrichardrankin #wankyanswer

Q favorite Disney prince, besides yourself?
A Simba.

Q Have you ever been to North Carolina? What would it take to get you to visit here & tour our @NCHistoricSites to see the actual places portrayed in Outlander? If you’ve been already, what did you see? What did you like most?
A I have been to North Carolina! Did a play called #TheBlackWatch – one of my favourite jobs ever, incidentally. Yeah, I hope to return before I start on S5, actually. Don’t know why. Just fancy it.

Q What’s your favorite thing about #RogerMac?
A His other half. #Brianna #Whereisshe

A I think one of the sexiest things about Roger is his nose in profile, to be honest.

Q Who would win in a dance-off, Roger or Richard?
A Ohhhhh…..Grandad dancing vs 60s Grandad dancing. I’m thinking Roger. He’s probably got some Rock n Roll in him.

Q When you are acting in a scene with Sophie, or any of the other actors, and you dissolve into laughter – how do you rein in your funny bone and get serious in order to continue the scene? Will we see you in a blooper reel this season?
A I am a very serious actor who takes his job very seriously and have the utmost serious respect for the other actors and their need to focus. Therefore, I generally don’t allow laughter when I’m on set. Not even that kind of unvoiced laughter.

Q What filming location has been your favourite of all projects you’ve been working on so far?
A The #Outlander sets are just incredible. There’s one S4 set in particular that I won’t go into detail about but all credit to @jongarysteele and his team. The level of detail and craftsmanship is stunning. Not difficult to immerse yourself in that world.
A (Jon Gary Steele) Thank you @RikRankin Richard from the whole Art dept!!!! Happy Holidays!! Xx jgs
A (Barry Waldo) yasssssss Richard

Q Do you think Bree would have accepted your proposal if you had been clean shaven?
A I think it was more his timing and less his facial hair that was the issue here, to be honest.

Q brouhaha online re costume. What say you? My thoughts are as you continue to hone into the 18c Roger, as you reveal your true self, your layers will come off. #multilayerlikeanonion
A Wait. Wait, what? Are you asking me to undress?

Q What is your favorite movie soundtrack?
A Oh. Interesting question. I think it depends on how I’m feeling. Been listening to A Star is Born recently. Which is great. Love LA LA Land. Pretty much all Disney soundtracks. Can frequently be caught randomly whistling John Williams to myself.

Q I miss the Hottie McBoxtrot Burnistoun days. Do you as well? Did you ever imagine this is where you’d be almost 10 years later?
A I just filmed on Burnistoun a few weeks ago!!

Many of your fans first saw you as Capt Gillian in The Crimson Field. Sadly it only aired for 1 season & left us wondering what became of our favorite doctor. Where do you think he ended up & what happened with #Kitmas ? #AskRichardRankin pic.twitter.com/TTLRlspXsF

A Let me just say that @Sarahphelps was kind enough to share the outline for the rest of the story on #TheCrimsonField and it was beautiful. Truly. Gave you shivers. I’ll always have a little pining for it.

⁦@Outlander_STARZ⁩ #AskRichardRankin I’ve stayed up all night to create the perfect picture that says “This is Richard” to me. I think I’ve captured your true essence. I hope you think so as well? 🤪 pic.twitter.com/vHUpTeBGVY

A This is my default expression. You’ve captured it beautifully. #restingstoodonanailface

Q Would you rather binge-read a book series or binge-watch a TV show?
A Last book series I properly binged was #Asongoficeandfire and it wasn’t healthy. I lost friends. The few that I had. I lost them. So it’s safer to binge TV for me.

) @RikRankin what is your favourite dinosaur

or prehistoric animal?
A Always had a bit of respect for the Velociraptor. In fact, I often pretend I am one. Especially when faced with a little round window and a door handle that I’m struggling with.

Q I never got a chance to ask you at Sasnak City last month but if you could time travel with anyone from the books, who would you travel with and what time period would you go to?
A I would travel with Lord John Grey to 16th Century Venice.

@RikRankin seriously, this moment was brilliant😢
Can you talk about the role the brown beanie played in helping you channel heartbreak and loss? #AskRichardRankin #Outlander #RogerMac pic.twitter.com/W3dDe2h9Zd

A I generally think anything that will take the focus away from my face is helpful. Especially in emotionally driven scenes. The audience are drawn to the hat and the underscore and we achieve the desired result.

Q besides NC, LA and NYC, what other areas of the US or other countries are on your list to visit one day?
A Loads of places I’d love to visit. Off the top of my head though: India, Iceland, Kenya, Singapore, Thailand. There’s a fair few!

Q The world seems to be enamored with #Scotland at the moment…as a native, what’s something fundamentally Scottish that always makes you think of home?
A #Irnbru

Q Bree’s letter in the last episode felt more like a “Dear John” than a love letter. “If” he should decide to go after her, what do you see as his motivation?
A To stop her from getting hurt. Irrespective of how he thinks she might feel – he still loves her and cares very much for her. He doesn’t want any harm to come to her.

How does it feel to be a reaction meme? #AskRichardRankin #outlander pic.twitter.com/59G1AUm2jJ

A You just think that’s what Roger’s looking at. He’s actually looking at a new leather bound journal. Which is hawt!

@Outlander_STARZ @RikRankin @Outlander_STARZ You have a lovely horse, so ye also like mulies, right? Asking for a friend (cough) #AskRichardRankin pic.twitter.com/1akqqIxnOn

@Outlander_STARZ @RikRankin @Outlander_STARZ You have a lovely horse, so ye also like mulies, right? Asking for a friend (cough) #AskRichardRankin pic.twitter.com/1akqqIxnOn

I feel like if there’s a recast (and God knows there might be!) You should definitely be up for consideration.

Q Not a question but just want to thank you for the time you spent with my husband @LarryTrulock at the Starfury Con last August. He is still talking about it. You are a gentleman Richard. x
A Always a pleasure, Martha. Just hoping that for Larry’s sake, you held up your end of the bargain. I haven’t forgotten.

A Feel like I was channeling my inner Martin Freeman here.

Q Would you ever consider visiting North Carolina to conduct character research?
A Yes. I am considering it. Should my character ever require experience of North Carolina.

Q if you could live anywhere in the world, where would it be?
A If it were to be outside of the UK then I’d love to live somewhere like San Francisco or New York.

Q Are you ready for everything that will happen to Roger in the future?
A What you mean him taking the time to get over Brianna, finding himself a nice Scottish Lass and settling down in a nice wee pad in Oxford to raise a lovely little family and start a family band? Yeah!

So many good questions! I’m sorry I haven’t got to them all but we should do this again sometime. Thanks for joining in and I hope you enjoy the rest of Season 4!!!