Fans Chat with Sam Thanks to Chase and United

by Samantha Kraupner
Samantha is an Outlander super-fan, and has traveled around the world to events. She is also my close friend, photographer and travel pal for the events I cover, and co-host of The Outlander Gab on the Air.

When Sam Heughan announced on Twitter that he would be participating in a virtual event, exclusively available to Chase Bank/United credit card holders, it prompted a flurry of social media activity as well as a lot of credit card applications being submitted online! Many friends contacted each other to see who may already have the specific credit card that was required to purchase entry to this exclusive event. The event itself was limited to 100 attendees, with each cardmember able to purchase a maximum of 2 tickets to this event. I had several friends text me to see if I was able to purchase tickets. 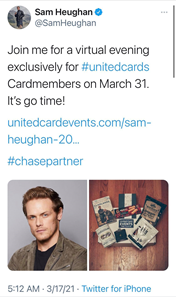 Unfortunately, while I possess a Chase Bank credit card, I carry one that is associated with a hotel frequent traveler program, not the United Airlines program which was needed for this event. But I dutifully passed the information along to my Outlandish friends with the hopes that one of them would be able to participate. We even talked about this event on our Three if by Space radio show, the Outlander Gab on the Air, for the past few weeks. As it turns out, a few friends had the requisite card and they tried their best to be one of the first 100 lucky members to snag a spot when they went onsale. One fast fingered friend, Cathie McQuistion, not only was able to purchase a ticket, she bought one on my behalf as well, as she claimed without me telling her about the event she would have missed out on it. Proving once again that teamwork is very important in this fandom!

The confirmation emails and zoom login instructions sent from the event team were all very well written. The United Card Events team excelled in customer service too. Cathie had an issue with the event gift box shipping and they were very professional as they quickly resolved the problem. As Cathie and I are both in the business of customer support, we truly appreciated this example of outstanding customer service. A result of this resolved issue is that Cathie is now in possession of an extra event gift box. She will be announcing a contest soon where you can win this box with proceeds going to charity. Follow her on Twitter to find out how you can enter. She is @CatsAndKilts and will also post in her Caitlin O’Ryan fangroup, Caitlin’s Coterie, which is at @CaitORyanFans.

The one-hour online event was very reasonably priced at $100, which is low compared to some of the other virtual livestreamed events that have been held this past year with cast from Outlander and other television shows. But in addition to being able to see and hear Sam speak live for an hour, this event also came with a very generous custom gift box packed with goodies such as:
• a signed copy of Clanlands: Whisky, Warfare, and a Scottish Adventure Like No Other
• a Sassenach flask
• a bag of Mackie’s of Scotland Haggis Potato Chips
• a bag of Live a Little Gimbal’s Scottie Dogs Licorice
• a box of Walkers Shortbread
• a tin of Edradour Whisky Fudge
• a Promptly Travel Journal 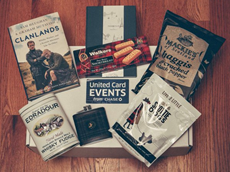 One of the unique perks as an attendee of this cardholder event was that they offered us a virtual photobooth. It had various templates where we could take a photo with our laptop camera and they emailed us our photo “with Sam”. It was a fun idea and a nice souvenir.

The event itself was very well produced. It started and ended on time and they used the Zoom platform technology very well to ensure that all attendees had a great experience. The first half hour was moderated by Ginger Zee, the chief meteorologist for ABC News and a television persona in her own right. She is an Outlander fan herself and has done some other Outlander related segments. Her bubbly personality shone through as she kept the conversation respectful but fun. The second half hour was filled with questions from the attendees. With 100 people on the call, I knew that it would be challenging to be chosen to ask Sam a question. But Ginger did a great job of moving everyone along and while I didn’t count at the time, I think maybe about 15-20 attendee questions were asked. And both Cathie and I were able to ask one! The conversations ranged from Outlander, Men in Kilts, My Peak Challenge, the Sassenach Whisky, and his opinions on Scotland in general. 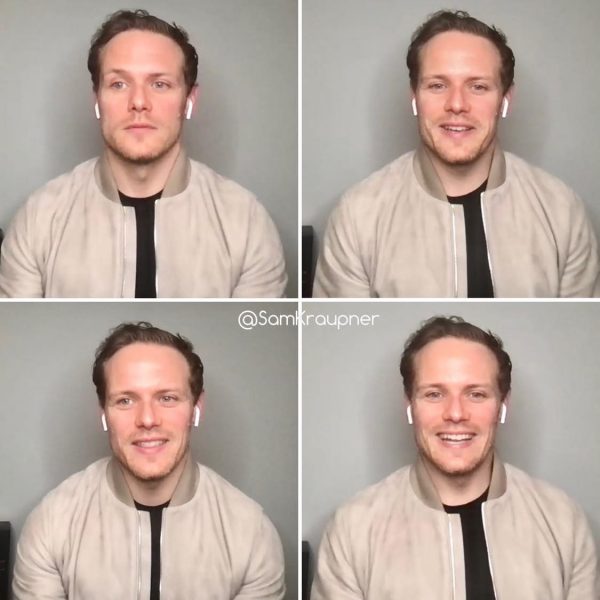 The member livestream event was not recorded. But I did try to take notes so I could recall what was asked and how he answered. Obviously, my recitation of the highlights won’t do the hour-long conversation justice, but I hope that it might give those who couldn’t attend a feel for the event. Sam was very open and engaging. It was like chatting with a friend. One of the most interesting stories Sam told was regarding filming Men in Kilts. He mentioned that when they filmed the Kilt Rock rappelling scene, that he had to film his climb in 2 takes. One was for the drone photography – and it was a rather cold and windy day. He also shared that while he isn’t as afraid of heights as Graham is (he actually admitted to being a bit adverse to tight spaces more so than heights, so he wouldn’t love to be trapped in an elevator), that they had to unclip from the one of the lines whilst on that tiny ledge and climb back up. Hearing this I’m surprised that there wasn’t more colorful language captured in this segment!

Sam talked about how he and Caitriona have shared a makeup trailer since season one. He laughed about how now the “young ones” (Richard, Sophie, Cesar and Lauren) have taken over the music in the makeup trailer. He described his taste in music as eclectic. He was recently listening to heavy metal, but he likes things from Kanye to Scottish bands and even classical music. His favorite classical piece is the Magic Flute (an opera by Mozart). He said he is always looking for new music recommendations and encouraged us to send him music suggestions on Twitter or Instagram.

When asked if he had traveled much in the US and where he’d like to visit, Sam mentioned that he would love to do a Route 66 trip from Chicago to Los Angeles. He also said he’d like to go be a cowboy in Montana. And when Ginger asked if he’d ever be up to going with her on a storm chase one day his emphatic answer was “OMG YES!”. Sam said that while filming Outlander is very time consuming, he is planning on an “end of the year adventure”.

And for those of you counting where they may be in filming by the end of the year, he was asked that by an attendee. While he couldn’t answer plainly, Sam did say if we all wanted to do some math that they film in 2-episode blocks, each block takes 24-25 days and they’ve been at it since January. So, by my rough calculations they should be well into the 2nd half of the season by now. 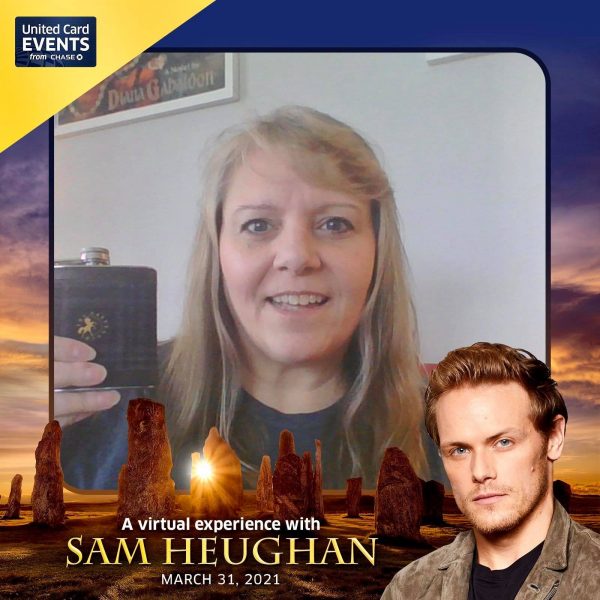 Cathie asked about the safety protocols that they are employing on set. They are extensive, everyone is tested every day, they work in “bubbles”, certain groups work together and are allowed on set together, and there are masks and face / eye protection worn if not on camera. It all sounds very safe and they thankfully have had no issues.

I asked if with him being offered more film roles and the success of his other ventures like MPC and the Sassenach Whisky, if he thought that he’d have time to continue to attend fan conventions. He said yes! He expounded that he really enjoys meeting fans at these events and has fun exploring the locations. He mentioned that the last one that he was able to attend was in New Orleans in January 2020 and he had a wonderful time. So did I! So I truly hope that we can all travel safely again and gather at conventions soon. And that Sam is there, too! Until then, if you get a chance to participate in a virtual conversation with Sam, I highly suggest you do it!

There were a bunch of other discussion topics and questions, but I apologize that there is no way I could remember them all! I was having too much fun to jot more than a few notes as I was watching. Thank you to all who attended for the great questions! And thank you again to Cathie for ensuring I had an opportunity to participate. And, of course, we will likely talk a bit about this again on the radio show this Tuesday.

Listen to the Outlander Gab on the Air – Men In Kilts Edition internet radio show, Tuesday evening, 9 pm eastern/8 central/6 pacific. Click here to listen (and hear all past episodes) and get our call-in number!