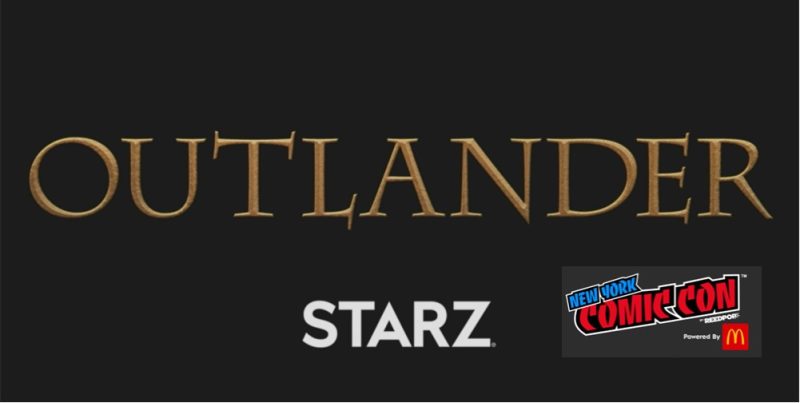 Today, Outlander took over New York City ComicCon!  The show hosted a panel with Diana Gabaldon, Maril Davis,  and Sam Heughan appearing in person, and John Bell, Lauren Lyle, Cesar Domboy, and Caitriona Balfe appearing remotely. They offered some insight into the upcoming Season 6 (still with no definite air date). This is a summary of the panel, which is available to watch if you purchased a NYCC virtual ticket. We’ll have a follow-up post in the next couple of days, with first-person accounts of the panel, the autograph signing, and other experiences! 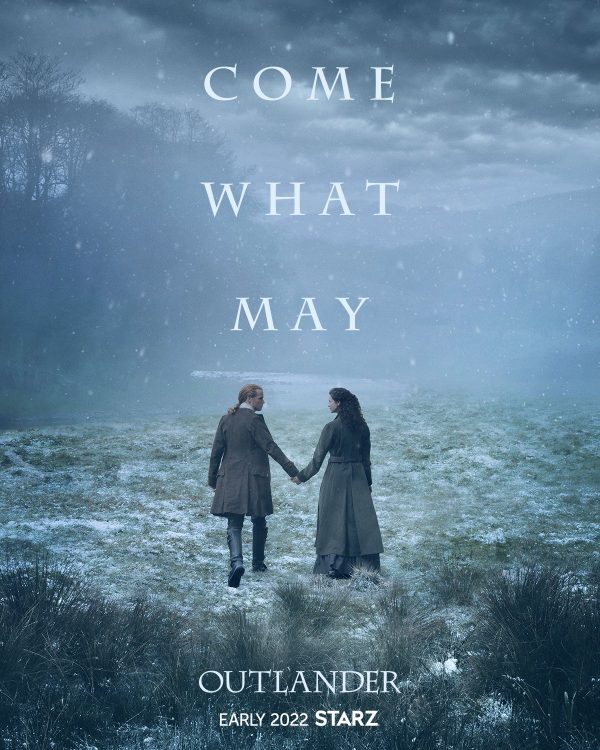 Ruth Kinane, an Entertainment Weekly correspondent, hosted. She first asked about Scotland’s changing weather, and how it affected filming the season. Maril: “It has become almost like a character in the show. This year was particularly difficult. This year, we were hit by so much horrible weather, and had to move some things inside. This is a show that wants to be outside, with the scenic view. This was tough for the actors, for the crew.”

Without further ado, may I present the official teaser for #Outlander Season 6! pic.twitter.com/sBF9HEWYRJ

What was Diana most excited for? “I think what you’ll most appreciate is the Christie family. Other than that, the usual…. mountains, snow…”

Sam added, “We have this family, the  Christies, that arrive at the Ridge. History between Tom Christie and Jamie begins to disintegrate relationships at the Ridge.” Do you ever wish that Jamie would put his honor aside and say “You’re not welcome at the Ridge?” “It really is something that he has to work hard to integrate them into the society.” 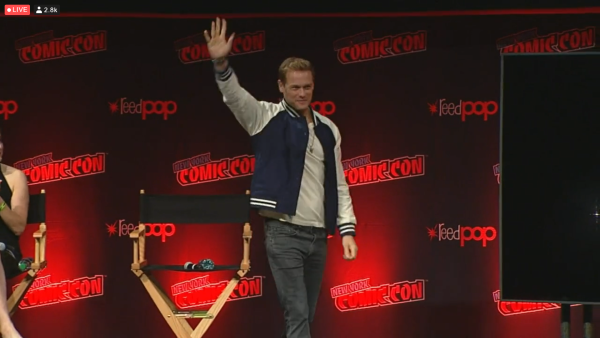 Caitriona was asked about working with Mark Lewis Jones, who plays Tom Christie. “There’s a little operation Claire has to do on Tom. They (Tom, Alex Vlahos playing Allan, and Jessica Reynolds as Malva) were great, and it was such a great dynamic working with the three of them. Nice new dynamic on the Ridge.”

Diana was asked if it was exciting to see characters you wrote? “I didn’t have any problem with what they looked like. They didn’t look like the people I’ve been living with for 30 years, but why should they?” 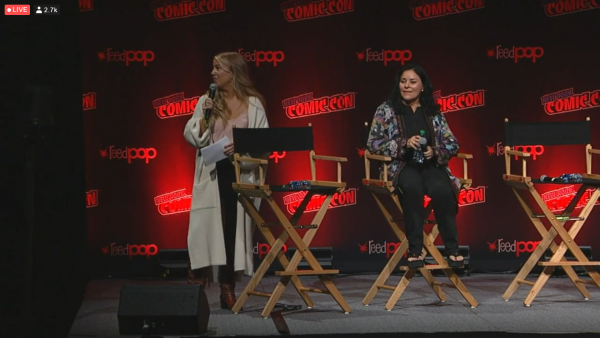 Last season saw Bree & Roger fail at returning to the 1960s. Maril: “I think they have settled in, as much as one can settle in. This season is all about each of them figuring out their place on the Ridge. Roger has so many skills that aren’t transferable. Same with Bree – she has an engineering background, how can she make this work and find a purpose? Of course she’s a mother, and that’s a purpose, but she wants to find a purpose beyond that.”

Ruth mentions a well, and Maril immediately says “that’s a bit of a spoiler!” Sam said, “It goes deep and brings up whisky,  That’s a nice segue to Cesar and his progress this season.” Cesar said, “Fergus drinks his way through his sadness.” Lauren added, “Yes, he has loads of time – I’m always looking after all of the kids.” 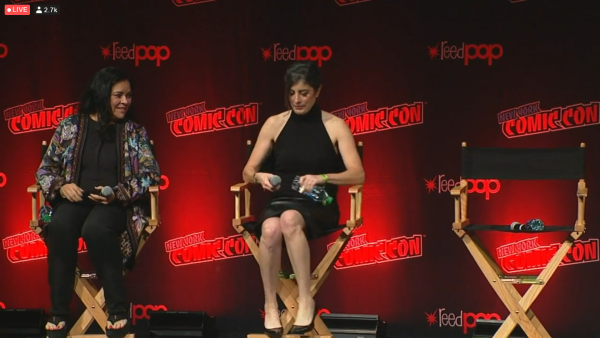 Ruth said that Marsali is possibly her favorite character, and asked Lauren, what is a compliment you get often about the character? “I get loads of messages about cats named Marsali. People love that she says what she thinks and has no filter.” Do we see her continue to learn the medical trade? “Yesssss, to an extent. You kind of catch Marsali and Fergus in the darkest place they’ve been in. They’re kind of like the cool couple that never fights, but you see them kind of fight this season. She’s got a bit more responsibility, not as much time to be the apprentice, and she needs more time to be a mother.”

John Bell talks about his character. “Ian in a dark headspace. Now, he’s a little more mature, a little more grown, not afraid to stand up for what he believes in. I’m really excited to see what he goes through.” 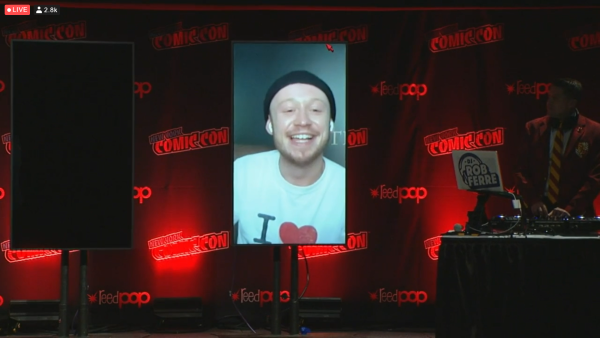 Maril was asked, “We’ve seen one kid for Bree and Roger, will there be any more?” “So many spoilers!” Maril said. “We may see another kid, maybe triplets, maybe they’ll take one one of Marsali’s kids. We may or may not, that’s all I’ll say.” Lauren said that Richard Rankin and Sam like to playfully “punch” the baby belly she wears, but Cesar said he never does that. “I feel like that’s our baby, so I would never punch it.”  Lauren talked about the prosthetics she uses for pregnant Marsali. “I literally take Marsali off at the end of the day. And there’s more than just the bump they give you (she stands and gestures to her boobs).” 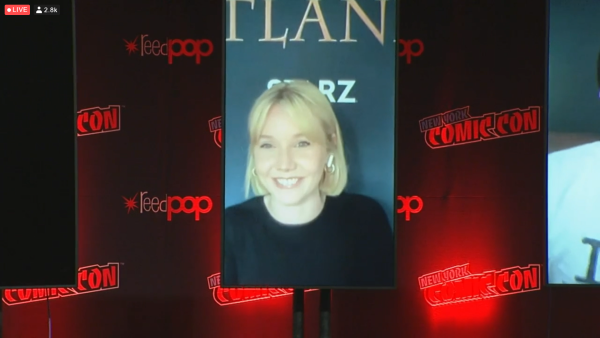 Ruth asked Caitriona, “How will Claire navigate her medical knowledge? Caitriona said, “She’s not intentionally taking a step back, but after last season, she’s been so good about compartmentalizing, this is the first time she can’t suppress something, first time she has to deal with what happens, and she may be a little bit destabilized. It bleeds into every aspect of her life. Jamie is so aware of it, watching her, everyone is much more aware than she is, until it becomes too much and she has to deal with it. It has an affect on every aspect of her life.” 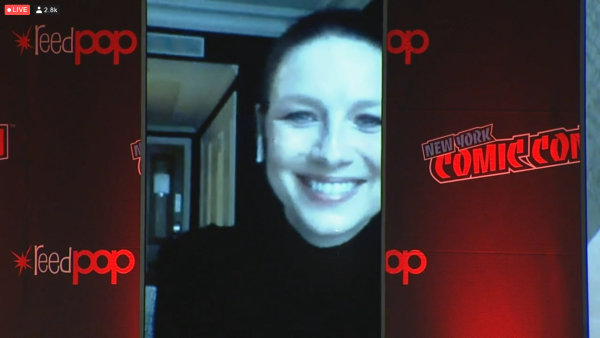 Is there anything in the filming that you thought would go on the blooper reel? Sam said, “I struggle with this, I can never remember that far back. The first episode is extended, and it gives time for the audience to learn more about the characters, sit with them more this season. It builds from the very first episode.”

Bree traveled back because of fear that parents would die in a fire, and then there are all these candles everywhere. Sam says, “Bree may also add to that this season. I’m beginning to suspect her.”

Maril said, “We made some choices this season. There’s no special episode like last year, but there are so many amazing episodes, I can’t pick my favorite. It starts off with a bang, lots of amazing stories. There’s something for everyone this season. Really intense and really packed. We filmed eight episodes, but it feels like 20.”

Ruth then did a Q&A – ever taken a nap somewhere you shouldnt’? Caitriona – on surgery beds. Lauren – had zipped myself full up i a sleeping bag after not sleeping for several days (at a festival). I fell asleep in the middle of a field, and nobody could find me.

Have you ever slipped out of accent on a scene? Sam: I had to do the Jamie accent for an audiobook recently, and couldn’t remember how. Lauren: we all know Jamie, it’s this smolder.

Have you ever had a disaster with on set animal? Diana: not a disaster, but there was this donkey. Kind of recalcitrant. John: It’s hard when you’re on a horse, have to be controlling the horse and controlling a dog at the same time!

Have you ever done pushups before a shirtless scene? Cesar: I don’t have shirtless scenes. Lauren:  me either. Caitriona: Sam never does ever, ever. Sam: Cesar’s looking buff. Ruth: Shirtless Fergus next season? Cesar: The actor is ready. 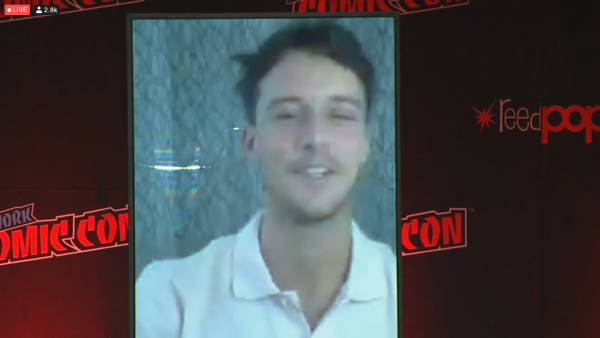 Have you ever flirted with a fan? Caitriona: I’d like to point towards Sam.

Have you ever feigned excitement with a friend got who cast in a big show? Caitriona: No! We’re really excited! We’re good people.

There was a short audience Q&A (I only included a couple of questions).  Did Covid cause issues? Maril: we had a lot of adjustments to make. Sometimes week to week. We had no covid on set.

How did you deal with Cait’s baby bump? Caitriona: Trish, the costume designer, did a great job. It was a little bit difficult, we have an amazing camera crew, but they’re all men, and don’t see things the way women do. They would say you’re fine, you’re fine, but I don’t think I was always fine. And we may be doing some adjustments in post-production. Maril:  Now that people know, I think people will be looking for it. We shot things out of sequence, so you might think you see something in one shot and not in another. We might use some creative solutions to fix some things, but it all works. Sam: It’s incredible, to be shooting during winter, through Covid, AND be pregnant, but I think Cait did an amazing job.

from Outlander on Starz.com, the official Season 6 synopsis:

The sixth season of “Outlander” sees a continuation of Claire and Jamie’s fight to protect those they love, as they navigate the trials and tribulations of life in colonial America. Establishing a home in the New World is by no means an easy task, particularly in the wild backcountry of North Carolina – and perhaps most significantly – during a period of dramatic political upheaval. The Frasers strive to maintain peace and flourish within a society which – as Claire knows all too well – is unwittingly marching towards Revolution. Against this backdrop, which heralds the birth of the new American nation, Claire and Jamie have built a home together at Fraser’s Ridge. They must now defend this home – established on land granted to them by the Crown – not only from external forces, but also from the increasing strife and conflict in the community within their care. For the Frasers and their immediate family, “home” is more than simply a site in which they live, it is the place where they are laying the foundations for the rest of their lives. If Season 4 asked “What is home?” and Season 5 asked, “What are you willing to do to protect your home?” then Season 6 explores what happens when there is disharmony and division among the inhabitants of the home you’ve created: when you become an outsider, or an ‘outlander,’ so to speak, marginalized and rejected in your own home. 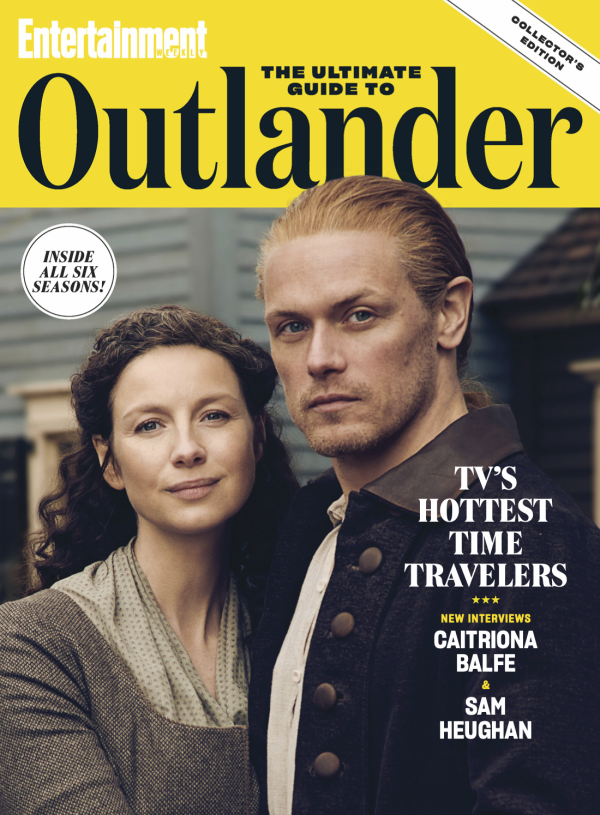