Online Extras Fill the Hole Your Show Has Left

Let’s face it – I don’t really have anything better to do (other  than, you know, laundry, work, cleaning house), and I’m, well, hooked, obsessed, with Falling Skies, and I’ve been catching up on Revolution so I can write about it. So, I’ve been spending (too much) time on the websites for these shows. I’m amazed at how much extra content is available! Maybe I’m late to the party, but I’m a woman of a certain age, and I remember when you watched your favorite show, went on to other things, and a week later, watched the next episode. That was about it.

TV programs are no longer just 30 minutes or an hour on your home box, discussed, if at all, with people you know personally. Now, that hour is just the beginning of your experience – add on extras available through network websites, fan sites, review sites (like this one!), Twitter and Facebook interactions… and it goes on. While digital show extensions can be found for nearly any show – Grey’s Anatomy and Revenge have extra photos, even trivia contests – sci fi and fantasy genre shows have embraced these fan-centered online activities more than any other type of program. 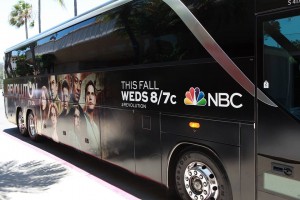 Revolution has joined this extended experience world. Need to see the last episode, Dark Tower, again and your DVR died? Got it. Looking for bios and pics of the cast? Got it. That’s just the tip of the, er, giant dome.  And – want more? The site has three games – one of them told me that I was all set to survive the disaster (I was talking to my kids about this the other day, saying that I didn’t think I had any skills that would keep me alive after the apocalypse – I can’t hunt, don’t know first aid, I’ve never touched a weapon; my nice kids said that I would make a good leader – I think my only option is to find someone who would need a scribe, or who was looking for a court jester…).

Some of the most interesting extras on the site were obviously created just for fans. While there are plenty of clips from episodes, there are also a couple of “the story of” videos – about Miles, Charlie and Rachel. There are videos on creating the music for the series. But my favorites are two specially developed webisodes. One, with five parts, focuses on Neville’s search for those who collaborated with Miles in the assassination attempt. It’s a total of only about 15 minutes, but gives some insight into how Monroe is viewed by his men, Neville’s rise through the ranks, Monroe’s obsession with turning the power back on, and leads up to why Neville is looking for Ben Matheson in the pilot. The other webisode is an animated series that focuses on a minor character – Sgt. Joseph Wheatley from the episode “Kashmir.” OK, so the bus isn’t an online extra, but it’s along the same line.

And if you want to catch up on the last couple of episodes, only the final five are still available for free on the Revolution site, and only until Sept. 15 (the new season starts Sept. 25).

Falling Skies also has an extremely extensive collection of extras. There is a large library of cast videos (Ryan Robbins gesturing to a large blue tarp and telling us that this is what we’ll see coming up, but it’s a big secret, is one of my faves), often snarky-but-fun videos of “rules” for living in this world, a series of “Know Your Enemy” vids, and, my favorites, the “Pope On…” set (Pope on… The Masons; The Berserkers, etc). For the fanatic: there are items that are no longer accessible on the site, but you can find them if you know where to look – check here for Pope’s journal entries. 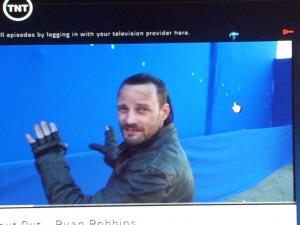 Walking Dead has a lot of great extras, including apps, games; Warehouse 13 has a reference guide to artifacts. Game of Thrones didn’t have as much as I had expected, but there’s some good stuff there. Photos, clips, cast bios, behind-the-scenes shots and episode guides are among the most common.

And then there are the fan-generated sites. Outlander, a very popular book series that is being made into an upcoming new series on the Starz network, has a huge number of fan sites, all of whom are a-twitter (and on Twitter) with each revelation about the series. (I’ll be covering Outlander for this site – watch this space!). OutlanderKitchen.com, My Outlander Purgatory, Ladies of Lallybroch and many others, as well as several dedicated Facebook pages, have large numbers of devoted fans, and many belong to or follow several pages. You can bet that many more will spring up as the TV series starts.

Falling Skies has lots of fan sites, from including a dedicated Noah Wyle fangirl site,  just one example of the fans’ devotion to the actors we love. In the interests of full disclosure, the founder of threeifbyspace is a major Falling Skies fan, and this site was started to discuss this show (no, really, read the About Us section of this site).

And in an interesting twist, Hyundai Motors sponsors a site/app called The Walking Dead Chop Shop, where you can build your own (virtual) zombie apocalypse survival vehicle! I haven’t tried it yet, but it somehow makes me feel better about my 7-year-old Santa Fe.

Be Part of the Action

If you’re itching to get more involved with Revolution, Falling Skies, or your other fave shows, you can check out their Facebook pages or follow the shows and their individual cast members on Twitter. I didn’t watch Revolution during the season (I watched them all on a combo of DVRd episodes and Amazon), so I’ll be interested to see how active fans are during the actual broadcasts. I can tell you that as a Falling Skies fan, I watch those episodes (boo hoo, done until next year) with one eye on the screen and the other on Twitter, where cast members, bloggers and fans tweet during the show. If there’s anything like this for Revolution (Billy Burke, please live tweet at least during the season opener!), I can once again have series-related ADD from trying (and failing) to multitask.

So! What’s the takeaway from this? If you are prepared to give up all life beyond the computer, assuming you have one to begin with, you can stay immersed in your favorite show(s) 24 hours a day. The options seem nearly endless (and, my husband would probably say, mindless, but he’s obsessed with golf and baseball, who could understand that), but if you can control your addictions and still get to work or school, feed yourself and find time to sleep, go for it!