Young Ian is in trouble all over again,
Looking forward to Tuesday’s #OutlanderALN
Uncle Jamie and Auntie Claire will never yield,
Only two episodes left until all-is-revealed! pic.twitter.com/IXymoUtzRH

The Bakra will see you now… Just kidding, behind the curtain are Toni G and Luke S., answering your questions. Reminder: We’ll be answering a variety of tweets that use the hashtag #OutlanderALN from this past Sunday’s episode.

Q I really liked how the sapphire was worked into the prophecy. I also like the change to the prophecy. Why was the decision to change it made?
A We spent a lot of time thinking about Geillis’s plan – why did she need the Silkie Treasure right now? For us treasure and prophecy had to be linked. 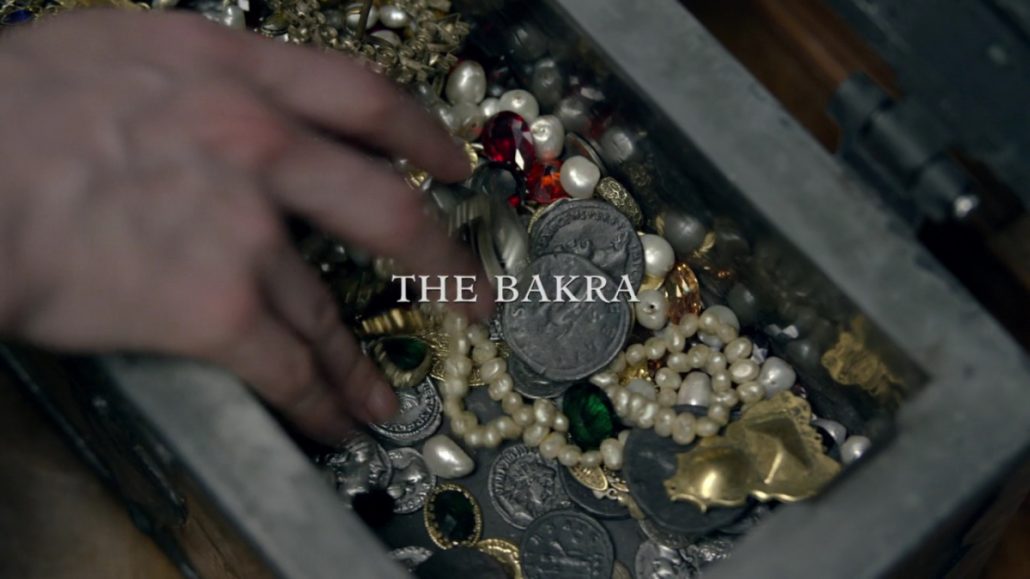 Q I’m curious why the prophecy was changed? In both the book and the show prophecy, the same person is in danger, so why the decision to change it?
A The book prophecy says the last of the Lovat line will rule Scotland. That doesn’t mean they’re in danger, even if Geillis intends to find them.

Q Was it always the plan to show Ian after he was taken whether it was flashback or in real time?
A It became our plan when we decided to put Geillis in this ep and not save her for Rose Hall alone. Seeing her and John Bell together was too hard to resist.

Q Why did Jamie feel the need to clarify the sapphire was from a prisoner after LJG’s comment that it was from a friend? Thank you! (BTW, one could never have too many scenes between those two!) Also, S3 has been beautiful and SUBLIME.
A Geillis expects Jamie to have the sapphire because of what Ian said. This line helps her understand that Jamie might be the friend LJG is referring to.

Q Was it hard to pick and choose what could stay and what had to go from the book (the murder at the ball for example)?
A One of the hardest parts of the job.

Q We’ve had a loooong chat about how we find out that Roger is Geillis’ blood relation. Don’t remember

can you help?
A In episode 213 Claire asks the clerk at the Inverness Town Hall to do a genealogical search on Roger.

Q What was in the “truth” tea? Asking for a friend

A Should we be concerned for your friend?

Q Just curious – why does Gellis call Jamie the “fox cub”?
A It’s a term of affection by Geillis, from the book. We thought it was quirky and fun. It refers to his red hair.

Q Wondering how on earth did Captain Leonard know Jamie was in that coach? Are we to assume he saw him off camera? Seems to be a number of off camera assumptions in the last few episodes. I know there’s a time crunch but, hard for fans to understand without seeing.
A “Excuse me, did you see who went off in that carriage? I got suspicious when I saw it leave so fast.” “Yes, sir. That was Jamie Fraser.” (Off screen)

Q Can you easily summarize the thought process behind not making Willoughby a suspected murderer at the party?
A There was just too much story to include in the Governor’s Reception. And we’d decided not to play the Fiend storyline earlier in the season.

Q I just want to say that I really loved the idea of use the French clothes again. Congrats!!

A This was Terry’s idea, as she enlightened us that clothes were often re-used and re-purposed back then! Nothing was ever wasted.

Q It wasn’t like you could run to the local department store for new clothes. Staying true to the time period of repurposing outfits make for an even more authentic feel to the show. The research and detail are incredible. Thank you @OutlanderCostum
A (Terry) Thank you!

Q I know Jamie wears a wig in the book but did you debate whether to keep that in for the show or not? And if so, what was the winning reason for keeping it in? (And why doesn’t Fergus wear one?)
A Not a big debate. We always look for little nods to the book, even if we make more substantive changes in plot. Fergus doesn’t need to hide red hair.

Q Does Yi Tien Cho legit like Margaret? Could we possibly see more of them together?
A Totes legit. 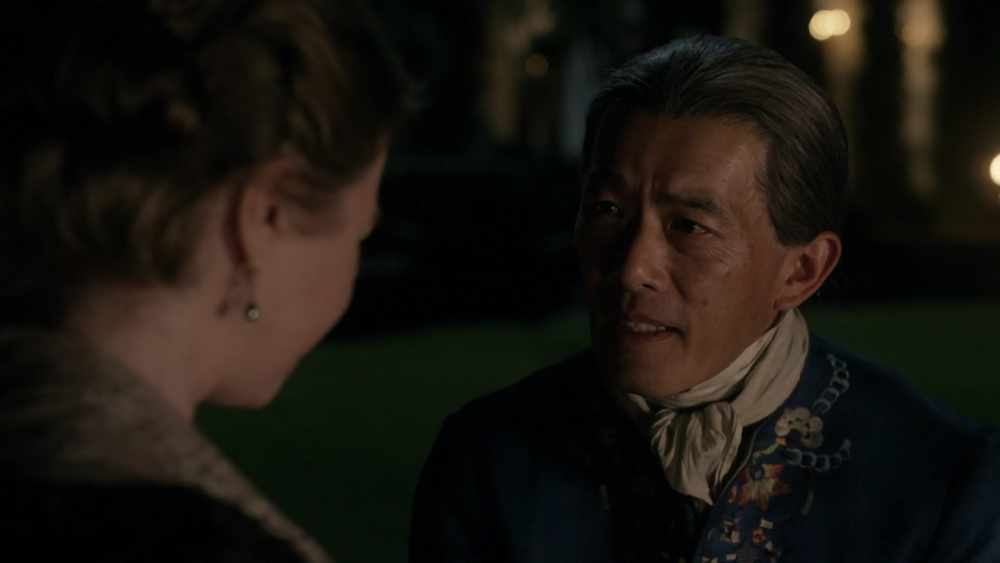 Q Is there such a tea in real life? In Outlander it is sometimes difficult to determine what is authentic and what is purely make-believe.
A I cannot tell a lie: such things are rumored to exist in voodoo, but… no, this is more or less a fantastical element of book and series.

Q so excited to see the phenomenal @lotteverbeek1 back as Geillis… what was the most exciting part about writing for her character again?
A The most exciting thing was that she got even darker and weirder in 20 years. And seeing her with Claire again!

Q How does captain Leonard know it is Claire and Jamie who left the ball and to follow them?
A He doesn’t know, he suspects. Then, off screen, he asks someone outside.

Q How did Geillis learn of the prophesy?
A She read of it in a book of prophecies by the Brahan Seer, an actual 17th century Scottish prognosticator (though possibly an 19th century hoax).

Q Did Archibald Campbell threaten to take a stick to his poor sister Margaret?

Did doctrine of couverture include sisters?
A It did not. But a man like Archie doesn’t need legal cover to be completely evil.

(In English and American law, coverture refers to women’s legal status after marriage: legally, upon marriage, the husband and wife were treated as one entity. In essence, the wife’s separate legal existence disappeared as far as property rights and certain other rights were concerned. For more, click here.)

Q Would you share what the (deleted?) scene was prior to Geillis coming out of her bloodbath?
A It was the pirates delivering the treasure box to Geillis.

Q I love this theory of Jamie’s that going through the Stones has awakened all the ghosts! Nice job.
A Thanks! It was our way of acknowledging the reappearance of a number of characters from previous eps – and a fun bit of mythology for the series.

Q OK so if Geillis has known about the jewels since Culloden, why did she wait 20 years to send some guys to go fetch them?
A It’s true, she knew about the jewels, but she didn’t give them a thought until she read the Brahan Seer prophecy years later. Also she had married a very rich man and didn’t need the treasure.

Q Has Claire figured out that John is in love with Jamie or just suspects something is up?
A Perhaps it’s best if we suspect – but don’t know – the answer. 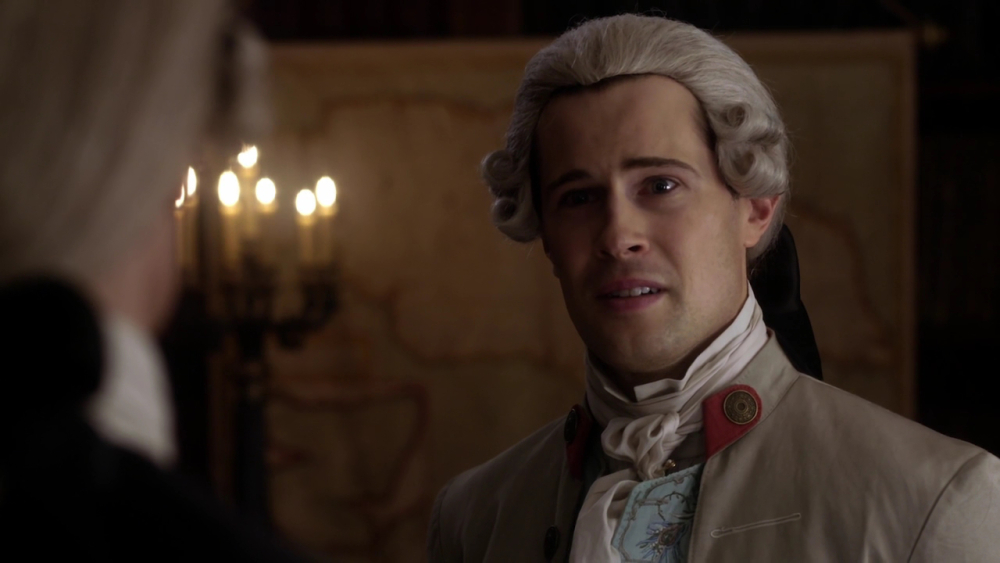 Q I loved the long, loving look between Claire and Jamie at the governor’s house. Was that part of the book or a creative choice by the writer or director?
A Not part of the book. We had lines in the script but cut them in editing because the look was powerful enough. Check out the script to see what they were: http://www.outlandercommunity.com/insideoutlander/312/ …

Q How much of the episode is Scotland versus South Africa? Are there actors in the ep that did not travel to SA?
A The interiors of the Governor’s reception were shot in Edinburgh. The rest of the episode was shot in Cape Town.

Q Logistically, how did the blood bath go down? Of what did it consist? Any CGI?
A The blood bath was CGI free. Our SFX team did a great job, not exactly sure what the recipe was, but it was verra buoyant and had to build handles she could grab and hooks for her feet where Lotte could anchor her feet into, so she wouldn’t float on the surface.

Q The bloodbath reminded many of us of the scene in “Carrie” with all that blood ON Gellis. Is that a nod to that scene in any way?
A Honestly we weren’t thinking at all about Carrie. Matt Roberts took some inspiration from Dracula for the idea that the iron & protein in blood keeps you young!

Q Anyone else wondering if Geillis knows: how & who killed Dougal at Culloden?
A We imagine she would be pretty mad if she did. And ye dinna want to make Geillis mad! 🙂

Q So many great moments this ep! Bloody but bewitching Geillis; gallant Willoughby; John Grey hiding heartbreak; C&J’s 20 years of unending commitment in one 20 second look. WHO’s your casting director that has found best actors EVER?
A Suzanne Smith and Simone Pereira Hind are our outstanding casting directors and do an amazing job. They have been with us since the beginning! A vital part of Outlander’s success!

Q Great episode!!! Who decided to add the chemistry between Yi Tien Cho and Ms Campbell?
A We decided this together in the writers’ room. We liked these two characters and thought it would be lovely if they felt a connection.

Q Was the place where they locked Young Ian up at the beginning of the ep on a set or a location? Loved those doors!
A This was filmed on a set.

Q Were the scenes with Young Ian on the Bruja at the beginning of the episode filmed when you were working on 3×08 or later?
A These scenes were shot in South Africa, as part of this episode.

Q Did Geillis lie to Young Ian when she said the blood she was bathing in came from goats and not from her prisoners?

A Can you ever trust anything The Bakra says? 😉 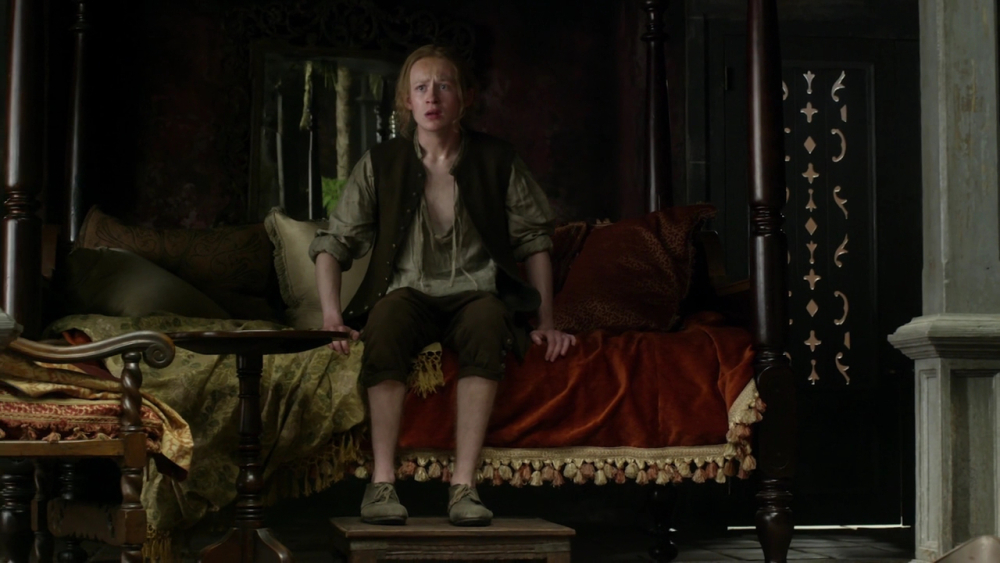 Q What scene of #TheBakra has provoked the most disagreement among the writers? If there was such a scene
A It wasn’t exactly a disagreement, but we talked a lot about whether to play all the Young Ian beats up front or to let them unfold throughout the episode.

Q Can’t wait for the grand finale and at the same time I don’t want this wonderful season to end!! Looking forward to the DVDs to survive through Droughtlander.
A We don’t want the season to end either!! We hope you enjoy the finale, and join us next week for our last #OutlanderALN of the season!!

My review of Episode 312, The Bakra