It’s easy to feel the commitment and passion Ron Randall has for a world he’s spent the last 30 years nurturing. But Mercy St. Clair and the world of Trekker aren’t simply work for the Portland independent comic creator, they are a love story that he’s tended to in a sci-fi garden he hopes to continue to see grow.

Fans of Randall’s Trekker, as well as the uninitiated, will enjoy the latest addition to the sci-fi world that Mercy St. Clair inhabits as “Chapeltown,” a 96-page trade paperback, continues to push this multi-layered character and her surroundings into new sci-fi directions.

To make his dream continue to grow, Randall has launched a 30-day Kickstarter program to help fund printing and distribution of the “Chapeltown” work, a prospect that fills him with the excitement of potential and the worry of risk. It’s the kind of bold play that Mercy St. Clair, the 23rd century bounty hunter (or ‘Trekker’) Randall created three decades ago, would likely appreciate.

To get involved, check out the Chapeltown Kickstarter campaign HERE. Or, go to Kickstarter.com and search the word Chapeltown or Trekker.

Trekker creator Ron Randall hopes to take his vision to the next level with a Kickstarter campaign to help fund Chapeltown. It runs through March 21.

“If you have a passion for the work you want to do, but for whatever reason it might night fit in the mainstream, and you still believe it has a core audience that will support it and follow it, Kickstarter is a way to appeal directly to the readers to finish this up and get it into circulation,” said Randall of his decision. “From a creator’s point of view, it’s very freeing and empowering.”

It’s hard to pigeon-hole Trekker and the universe it encompasses. Simply calling it sci-fi does the storytelling, artwork and overall vibe a disservice. Randall points to influences as diverse as “Star Wars,” “Bladerunner,” “Johnny Quest” and even the old ‘70s cop show “Cagney & Lacy” as key elements in the development of lead character Mercy St. Clair and the world he’s created around her.

She is a bold and dynamic female character who is equally at adept at using her fists, weapons, wits and surrounding environment to navigate the dangerous world she inhabits. Randall’s vision for the character, and the entire Trekker realm for that matter, are delightfully drawn and colored, with plenty of detail and nuance embracing it. He’s created a world that is engaging and captivating, but very accessible to the imagination.

There are planets to visit, spaceships to pilot, interesting characters to meet, and a world of unique and vibrant sci-fi that beckons you to take a visual walk through. Trekker offers the reader a chance to “just let go” and explore something new and exciting within a different universe. Just what Randall envisioned from the start.

How it all began
Randall’s love affair with the sci-fi genre began in his early childhood, then blossomed from there.

“I read some of the early comic books such as Superman, the Legion of Super Heroes, and even the Flash,” Randall explained. “They were all sort of speculative science-based and you quickly slid into sci-fi concepts. Those comics really captured my imagination and asked the question, ‘What if?’”
With those early titles, the key turned ever-so naturally in Randall’s mental lock and the imagination flowed out the open door. 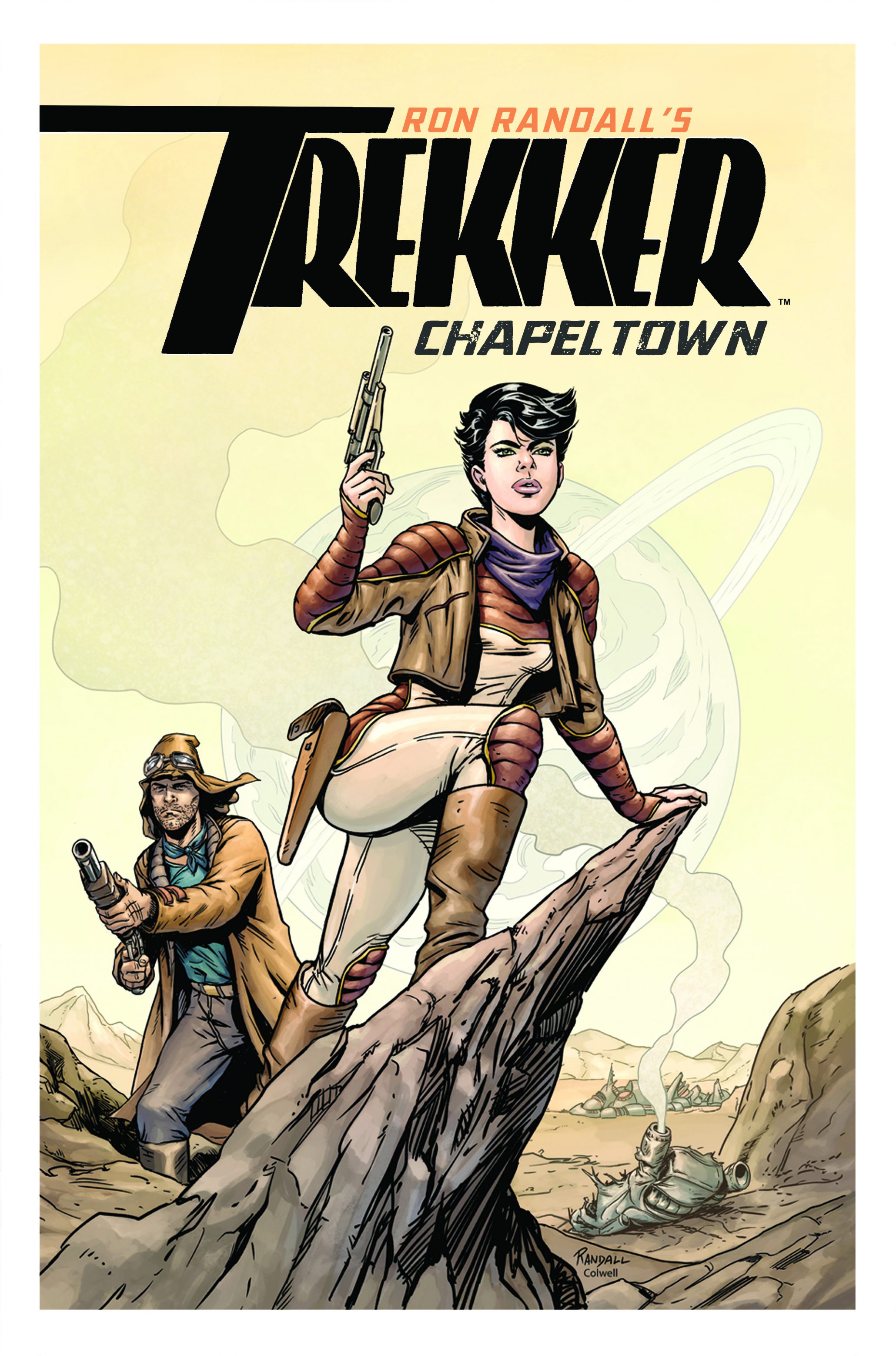 “The big moment for me was when I was at a newsstand one day in the mid-60s and, flipping through some comic book titles I was familiar with, I saw this one comic book I had never seen before. It was Flash Gordon #5 from King Comics. It was drawn by Al Williamson, whom I’d never heard of before, but it was so strikingly different,” said Randall. “I said ‘What is this?’ and opened it up and there was Flash, Dr. Zarkov, and Dale. Everything was rendered so vividly and wonderfully that I was transported to that world. I decided that’s what I want to do. I wanted to be an artist and do those kinds of stories.”

There would be other influences along the way – the book “Dune” by Frank Herbert, “Fahrenheit 451” by Ray Bradbury, the progressive look of “Star Wars” and the gritty, noir feel of “Bladerunner – were just a few of the influences that were working in Randall’s creative cauldron as his career moved along. In the mid-‘80s, opportunity would knock at Randall’s door and the genesis Mercy St. Clair and Trekker would begin to take root.

Back in Portland to do some work for fledgling comic publisher Dark Horse Comics, Randall was given the opportunity to do anything he wanted.

“I realized I wouldn’t have an opportunity like that again in my professional life, so I just went for it,” said Randall. “So, I started thinking about if I was to create my dream project in comics, what would that be. I wanted to do a sci-fi comic of some sort and a concept that would embrace all the things I love about science fiction – interesting planets, noir, westerns, swashbucklers, Bladrunner, those types of things.”

And as the ideas started to come out, he focused on the concept of a bounty hunter, who is essentially an adventurer. 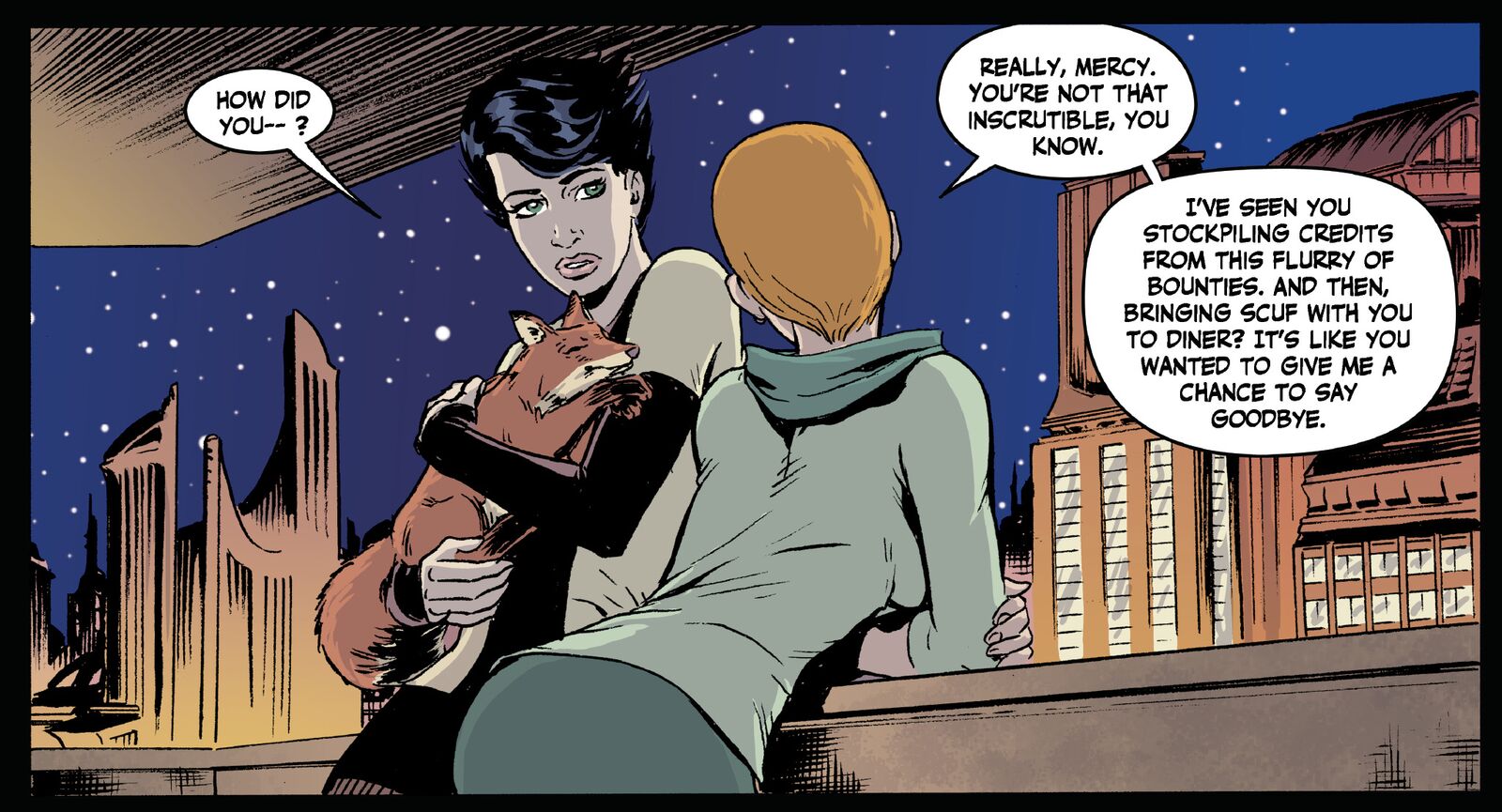 A panel from the new Trekker work by Ron Randall called Chapeltown.

“I thought it was a good concept,” he said. “I very clearly wanted to have a strong female character at the center of it. A woman in these raw, rugged, action settings was kind of compelling and I wanted to explore it. And I decided that if I was going to have a woman character in a main role, I absolutely did not want it to be a case of a scantily clad, long-flowing hair type that was typically being portrayed. That’s the approach I went about in constructing Trekker.”

Randall said even 30 years ago, his goal was to design a long-running series. Over the years, there have been long interruptions in getting stories to print, which he admitted was frustrating at times. However, in 2011 he resurrected the adventures of Mercy St. Clair and the Trekker realm by utilizing the Internet. After building a website for Trekker, he began slowly posting the pre-existing stories over time.

“And then the crucial step I made was that I publicly declared that by the time I had posted all the existing stories, the next story would be ready to publish on the website,” said Randall. “I gave myself a very public deadline and risked some public humiliation at the same time. 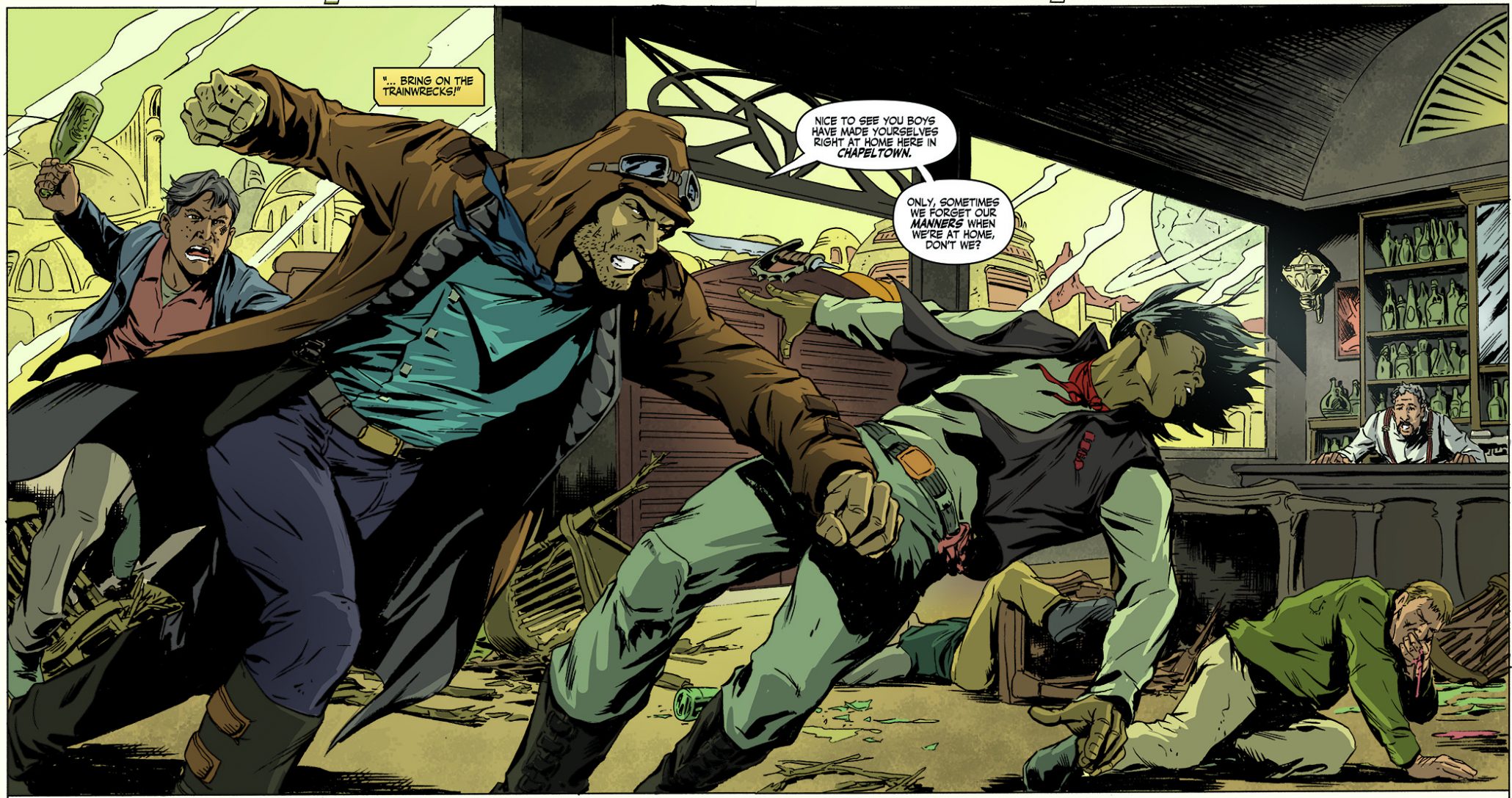 The work of Ron Randall on a panel from his new Trekker work, Chapeltown.

“The stories were written in long-hand and sitting in a drawer,” he added. “That deadline gave me the focus to get in there and do it.”

Previous Trekker material has once again made its way into print, but now the next big step is at hand – raising $15,000 via Kickstarter to make “Chapeltown” available to those looking for something new and inviting in the sci-fi realm.

“From a creator’s point of view, it’s very freeing and empowering. I’m basically making my case for Trekker and to publish Chapeltown, the next story in Trekker,” Randall said.

Within the Kickstarter campaign, which runs through March 21, there are opportunities for supporters to receive bonus materials from Randall, including an add-on Trekker story. Regardless of how it all turns out, Randall continues to enjoy the journey of Mercy and her companions as a labor of creative love.

“Being an artist, I think, is about making that connection with people,” said Randall. “I put it out there and it gets a response from people. When you share who you are with people and have that acknowledged, it’s very gratifying. But the depth of that experience is so much richer when it’s something so deeply inside me. It’s a deep, joyful passion I get from my childhood love of sci-fi.”

Ron Randall has been drawing comic books for over 30 years. He has worked for all the major comics publishers in the United States, including Marvel Comics, DC Comics, Image, Dark Horse and IDW on properties as varied as FutureQuest, Spider-man, Supergirl, Predator and Star Wars. His own science fiction series Trekker is his signature project. Published through Dark Horse Comics, it tells the on-going adventures of 23rd century bounty hunter Mercy St. Clair. To find out more, check out these websites: www.trekkercomic.com or www.ronrandall.com.