Can they keep up this pace? Can WE? The STARZ series won’t be out for (most likely, since they’ve given us no definite date yet) probably seven or eight more months, but the diabolic marketing team is conspiring to keep us all in high blood pressure meds. Between the fan events that most of us can’t attend, the Twitter chats, Tweet-shorts, photos, vids, as-yet-unannounced Ians, Terry Moore’s costume department teases, Matt Roberts’ stunning pix, Donas the Horse and Jamie’s Kilt (if you haven’t found them yet on Twitter, why not?), we’ll be at a fever pitch by July or August. Houses will go uncleaned, children untended, husbands ready to fight fictional characters for our favors.

Today’s bits were a TV Guide blurb with a stunning photo of Claire and Jamie, showing off not only the beauty and chemistry of our main characters, but the gorgeous Scottish countryside and the meticulous costuming created for the show. Costume designer Terry Moore (who is the wife of executive producer Ron Moore) said earlier today that the tartans for the show were all created by her costume department, not historically used by any clan. Here’s the latest pic to break the internets: 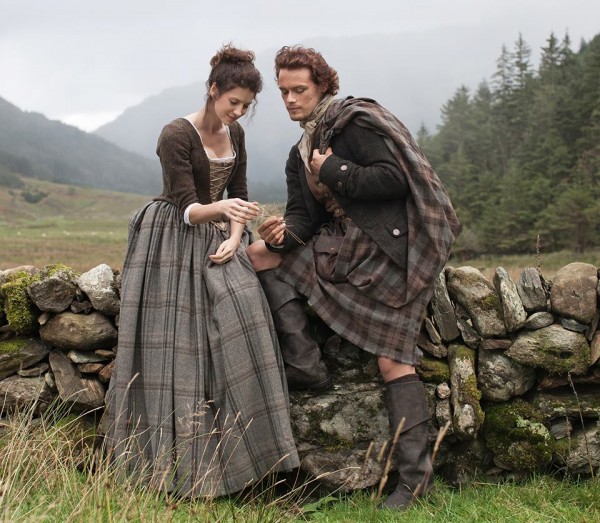 And if you really can’t wait, but would like to fill the time with another historical drama, try STARZ’ Black Sails, which starts January 25. This pirate-themed drama looks really cool, and the just-released opening sequence, which you can see here (in an exclusive from Entertainment Weekly), reminds me a little of Game of Thrones’ opening titles. I think I’m going to have to order STARZ a little early this year!

Looking for some friends to discuss Outlander with? I’d like to suggest MyOutlanderPurgatory.com, a terrific website with a weekly chat, video blogs, lots of good Outlander discussions.  It’s fun to talk about Jamie and Claire with people who won’t look at you like you’ve suddenly gone soft in the heid. I found out last week that one of my coworkers is an Outlander fan, lent her Scottish Prisoner today. And hubby’s cousin, who I don’t see often enough, posted something out of the blue about the show being filmed today on Facebook – turns out her book club read Outlander, and she’s gone on to read DIA and Voyager. So now I know two more people that I can talk to!