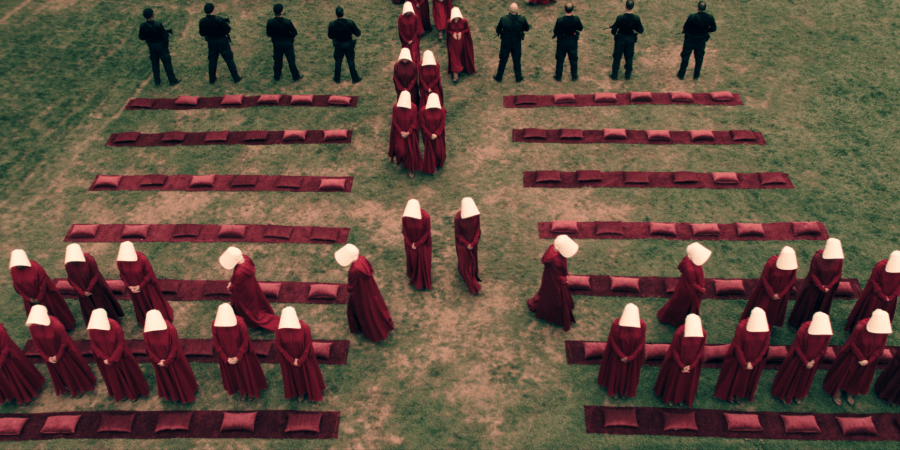 I’ve always been a fan of dystopian fiction. Children of Men, The Passage, The Physician’s Tale, some of my favorites (if you haven’t heard of some of those, look them up!). Many years ago, I read Margaret Atwood’s The Handmaid’s Tale, and it made a very strong impression. Somehow, I missed the 1990 film starring Natasha Richardson, but now we have another chance to see the book translated to screen – Hulu will debut the first season of what looks to be a fascinating production, on April 26.

The Handmaid’s Tale is set not too far in the future – radiation and climate change have ravaged the country, and the birthrate has plummeted. A fanatic Christian sect has become mainstream, taken over the government, renamed the country Gilead, and has instituted a strictly man-centered society. Women are now divided into categories – Wives, who are allowed to live in relative ease and luxury, but who have no power and are expected to be pious and obedient;  EconoWives, who don’t have anywhere near the privileges of Wives, but who are “given” to men in lower classes; Marthas, the servants; and Handmaids, women who have proven to be fertile by having their own children before the collapse (children who were taken away), and are passed around to upper class men, to bear their children – or be shipped off to harsh, short lives in The Colonies.

The drama series, based on the award-winning, best-selling novel by Margaret Atwood, is the story of life in the dystopia of Gilead, a modern-day totalitarian society in what was formerly part of the United States. Facing environmental disasters and a plunging birthrate, Gilead is ruled by a twisted fundamentalist regime that treats women as property of the state. As one of the few remaining fertile women, Offred (Elisabeth Moss) is a Handmaid in the Commander’s household, one of the caste of women forced into sexual servitude as a last desperate attempt to repopulate a devastated world. In this terrifying society where one wrong word could end her life, Offred navigates between Commanders, their cruel Wives, domestic Marthas, and her fellow Handmaids – where anyone could be a spy for Gilead – all with one goal: to survive and find the daughter that was taken from her.

I just reread the book – short, but not easy – getting ready to watch this new series. I hope you’ll join me if you can – I realize that Hulu, like Netflix, is an extra expense. But I’m very excited to see what Hulu does with this hopefully not prophetic story. Check out the featurette, released today.