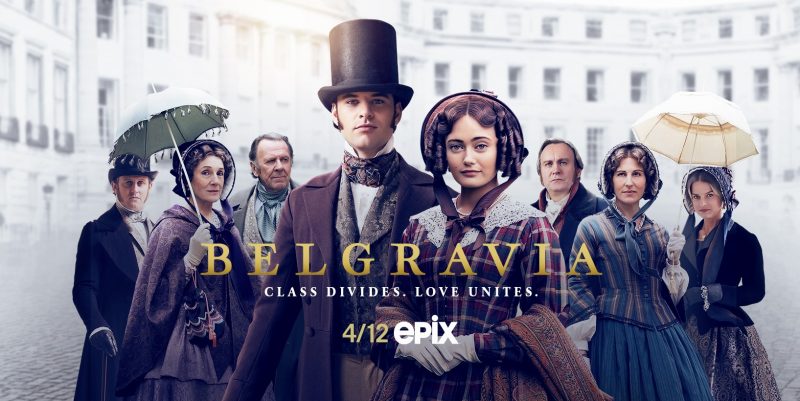 Missing Downton Abbey? Poldark? Still gnashing your teeth about Sanditon? Maybe you need something to watch in between Outlander episodes? Never fear, Downton’s creator, Julian Fellowes, has something new for you. Belgravia starts on the Epix channel this Sunday, April 12!

The six-episode drama is full of what you watch period shows for – class conflict, pretty costumes, snobby people, family secrets. The story begins in 1815, as Napoleon is set to invade Belgium at the battle of Waterloo (cue Abba…). Sophia Trenchard, daughter of a successful merchant, has fallen in love with a young soldier who is way out of her class, becomes pregnant by him, and dies in childbirth. It picks up 20-some years later, as the secrets the family has kept all this time begins to unravel. If you’re a fan of PBS’ Victoria, you may recognize this London – it’s set during the same time period, same costume styles.

I first wrote about Belgravia four years ago – it started as a subscription multi-media, multi-platform series, followed by a best-selling novel. So the story has been around for a while – if you bought this subscription then, you won’t want to miss the TV series. I’ll confess that I didn’t, despite my interest, subscribe to the earlier version, but I did read the book. I found it a little twisty-turny but interesting, and I think, from the first episode, that I’ll enjoy the TV show even more.

Period dramas like this one can be a little hard to get into – morals have changed, we no longer have the strict class structure and etiquette we see on screen, and the writing tends to be much more formal than we hear in everyday conversation. That’s part of its charm, though! Oh no, Mrs. Trenchard talking to a Countess? Sophia falling for a Duke? It’s NOT DONE! Well, it was – and that’s the drama.

This town isn’t big enough for all their secrets. #Belgravia – the new series from the creators of @DowntonAbbey premieres April 12th at 9/8c on @EPIXHD. pic.twitter.com/mYnSWfHy0w

Here’s the cast of characters: James Trenchard, social climber, merchant and contractor, known as The Magician; his wife Anne, whose love for her husband overshadows her reluctance to push into societies she wasn’t born into; their beautiful daughter Sophia; and their entitled son Oliver, with his snobby, deceitful wife Susan. Charles Pope, mystery man of unknown (to himself) origins. Lady Brockenhurst, mother of Lord Bellasis, handsome rake, killed at Waterloo. In between, there are various Dukes and Lords, Ladies and Countesses; villainous servants; innocent, loving pawns; men and women with secrets just ready to tumble out of their mouths.

Meet Lady Brockenhurst, can money and power buy her happiness? #Belgravia – the new series from the creators of @DowntonAbbey premieres this Sunday at 9/8c on @EPIXHD. pic.twitter.com/hFblOF5nk6

Epix is a premium channel for most cable providers, but the good news is that it’s very inexpensive (actually, I called DirecTV, asked to add Epix, and requested a reduction in my cable fees – they gave me a 30% reduction for a year, including the $5/month fee for the extra channel. And there are LOTS of good original programs on Epix – feel free to check out Berlin Station, Deep State, War of the Worlds – it’s well worth adding). And folow us here – each week, I’ll chat a little bit about each episode!