There are some stories that just seem to stick and expand, some ideas that spawn huge numbers of new ideas. Blade Runner, the 1982 film adapted from a Philip K Dick short story (Do Androids Dream of Electric Sheep) is one of those stories. In 2017, a new – not remake – film, Blade Runner 2049 came out, preceded by three animated short films that detailed the years in between the two films. And now, there will be a new animated series, which follows the story after the one of those short films (2022: Blackout, which is at the end of this article) – Blade Runner: Black Lotus.

ComicCon@Home showed a panel yesterday discussing this new series, and showing the first trailer and art. The series will start “sometime this fall,” which was as close as the panelists were willing to get, on Adult Swim (Cartoon Network’s evening block) and CrunchyRoll (streaming). Panelists included co-directors Kenji Kamiyama (who will also direct the upcoming Lord of the Rings animated show, Battle of the Rohirrim) and Shinji Arimaki; executive producer Joseph Chou (who translated for Kamiyama and Arimaki); Wes Gleason, voice director; and principal voice actor Jessica Henwick. The panel was moderated by Jason DeMarco. 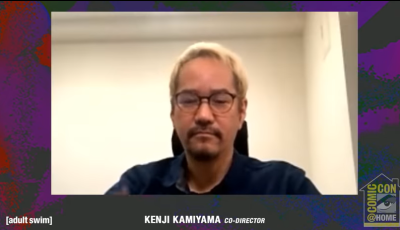 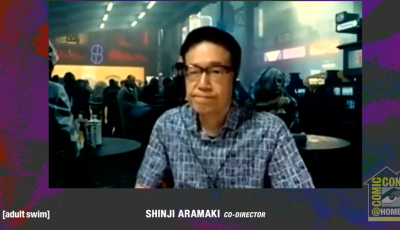 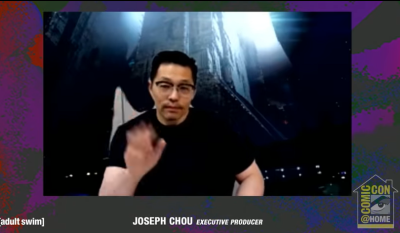 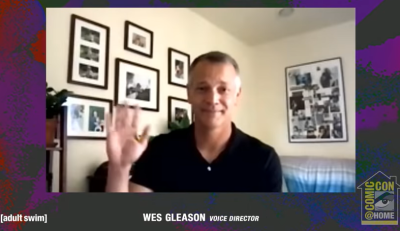 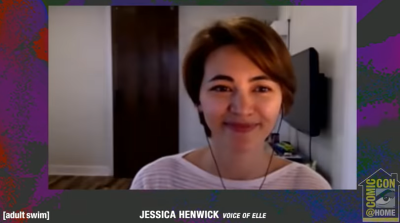 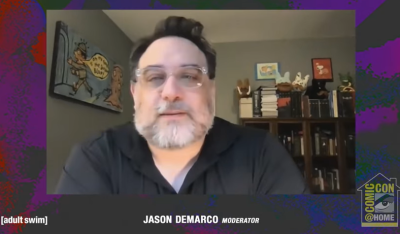 DeMarco started out by asking how the principals began to talk about this project. It took  five years from stating to talk to starting to work on the project, they said. How did project come together? Joseph Chou said he had worked on Danny Matrix, an animated version of The Matrix, and noted that by coincidence, Jessica is starring in Matrix 4 (scheduled for a December 2021 release, although not much else is know about the film). After that ended, he was looking for his next project to adapt, and the answer was Blade Runner. “It inspired lots of anime, cyber punk anime and look, why not go back to the source?” he said. He wasn’t sure about rights, and started chasing it. It took almost 15 years, but finally the rights were purchased by Alcon Entertainment, which then produced three short films as promo pieces for Blade Runner 2049.

The original movie was hugely influential. Kenji Kamiyama said he grew up on this movie, and just hearing it was available, said “That’s unbelievable, when can we start?” “It was one of first movies I caught in theaters. All my career, I have been chasing that kind of visual shock and impact it had,” he added.

Jessica  Henwick  was asked how she first hear about Black  Lotus, and her first thought when it came to her as a role. “It was one of first sci fi films I saw, and my father was definitely a fan. So many things derived from Blade Runner. When production reached out, I jumped at the chance. I never thought I’d get to be a part of this world.”

Not much has been released much about timeline or storyline – where in the Blade Runner universe does this show take place? “It falls in between Blackout, after the first movie.  It basically concerns a worldwide blackout event, and the world has lost much of the power and memory stored in servers. There’s been a massive loss of communications. It happens about 2032-33? The original film is set in 2019, an alternate timeline of 2019. Blackout was in 2022. We were trying to anchor from the perspective of a replicant that’s hunted, a female figure trying to find identity and the reason she’s hunted. That’s the main story,” Chou said.

Aramaki added, “It concerns a female replicant. The larger concept is the world, who’s running the world. Tyrell Corporation was in the first film, and Wallace Corporation in the second. What’s the world, how is it working in the big machine? What happened and how did it happen?”

Wallace Jr. is a major character in this series. We meet Wallace Sr. (from 2049), and see the dynamic between them. In  terms of themes, it’s very anticapitalist, how corporations basically destroyed the world. Poor people live on earth, rich people don’t, and they have replicants to do their work. DeMarco asked if the show follows through on the pessimistic Blade Runner anticapitalistic theme. Looking at Blade Runner and its pessimistic POV, how did they want to demonstrate that? Kamiyama said that the world is very anticapitalistic, but even that capitalism itself has collapsed, and made life more difficult. “It’s a thematic exploration of the series, reflective of what might be going on right now. The world has huge difficulties, and has fallen into a place where there’s such divide in society, you see the struggle of the main character.” One difficult thing he wanted to portray was the struggle on the part of the individual vs society, against the world. “How did you stand and find your own identity and place in a world like this? Because the series explores the character of the female hero from the perspective of the replicant, from the POV of someone being hunted, on that side of the world. Discrimination, alienation, in general fighting against injustice,” Kamiyama added.

Aramaki said, “In the dystopian world that these people live in, though the events of the series, we talk about hope, how two people come together, there could be love, could be hope, they could stand together. That drama also is not just some cold, difficult uncaring world.” Kamiyama said the series shares characteristics with 2049 – Wallace Jr. has a god complex, the man who would become god, the world has lost ability to procreate. Here’s a person who says ‘I can save you.”‘ We see that with dictators, how does one become that and go through it? It was an interesting theme to look at, esp with COVID going during production.”

Covid affected everyone on this panel. What was it like making this during the pandemic? Kamiyama said, “Animation itself, has no physical sets, it happens in a digital world. It was not that tough to switch to remote work and work through computers. But human interaction, to convey acting, or look we want, was very hard to convey through cold medium of technology. There was a lot of misunderstandngs of intent, to get the staff to understand. That was probably the toughest part, but we got around it.” Aramaki added,  “Another tough part was also the process of recording because normally we would head over to US to be in middle of recordings, but we did first sessions here (in Japan). In the beginning, once the pandemic happened, we switched to remote, relying on our team at studios around the world, on our voice director, on the actors.” Time zone differences caused their own struggle. Jessica said, “I felt so bad!”  Wes Gleason said, “Every session started with an apology, because Jessica was all over the world, and we had to record her wherever she was.” Arimaki added, “We were able to get through it because the first recordings before the pandemic, and it helped to all meet. The cast literally recorded from their closets.”

They talked about the process of casting – how was casting approached? How easy was it to line people up? Wes Gleason said,  “I was very grateful for a chance to meet the production team before the pandemic, start the collaborative process.  The energy feeding off each other was central. Alcon Entertainment wanted me to meet with the directors and Joseph to discuss their thoughts, get my opinion on these characters, and see the bible they had formatted. From there, it was a coherent communication process despite the language barrier. Those journeys didn’t usually take too long because we were on the same page. Execs at Alcon were very proud and excited about this franchise, and wanted it in line with the original and 2049, and the other shorts that were released with 2049.”

De Marco then asked, “Why Jessica? What role did you see her in that you thought she would work?” Gleason said, ” I was definitely familiar with her roles and voiceover work in progress. Hearing her range, I knew this character needed to have transition throughout series, start with a fresh vulnerable place, almost youthful, almost innocent progressing to something very different. Jessica captured all those ranges they were hoping for. We see growth from replicant’s pov. The theme of this series is about identity and humanity as a whole. We see so many of the humans portrayed in negative light, and they blame circumstance and the dystopian environment, but it’s their choices. Despite exposure, it’s choices they make. There’s a lot to encompass in a short period of time. This really has that Blade Runner feel to me, we hear those characters in their natural spaces, recording dialogue in a natural environment first.” 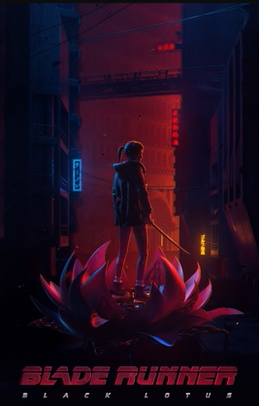 The show was done with computer graphics, rather than the 2D look of the previous three short films. “Why did you decide to do this in CG, instead of 2D, like Blackout?” DeMarco asked.  Chou said, “We had the best animators congregated into that short film. These days, it’s hard to get that level of animators. They’ve all gone on to other projects. This has to look great, so what do we do now? Computer graphics is at a level where we can try and emulate, or pay homage to, the type of lighting in the film, the look and feel and atmosphere. So we decided that would be one possible way to go. That was the challenge at hand. It can more closely approximate the visual of the film in the format we were in. Kamiyama said, “The Blade Runner city itself is a character. The difficult part of trying to do that in 2D is that you have to draw all of that and make that city come alive. So to try to really make that come alive, CG seemed like a better choice. It’s not as if the CG wasn’t tough either, but it enabled us to do this better. It’s a dark environment, but it’s lit in a very interesting way. It might be a better medium to do this in CG. But we need to give a prop to our CG supervisor – he knew how to light this. In a way, he was our director in a CG film. He knew how the screen should be made, how the picture should be made. It came from his sensibility and the crew. It might be a little difficult from a purely Japanese artist pov, it’s a world that’s flat and the lighting isn’t something that might be focused on. But we have a crew that comes from all over the world.”

Arimaki said, “If you try and do it in 2D, and try to focus on a live person, it’s dark. But with CG, it’s very ideal to do it in CG animation, with neon lit signs. We had very many false starts to how to get the look right. When you try to make it look like anime, you use an outline (around the drawings). But we got rid of that, and made it blend into the environment. I also have to say that Alcon invited us, when we were trying to make the short, we went to the set of 2049 when we were making (Blackout), and we took away from that that it was all about the lighting and how the picture was composed. And in trying to do it honor, it was getting scary, but I think we found that look. I hope the fans really find it doing somewhat of a justice to the film.”